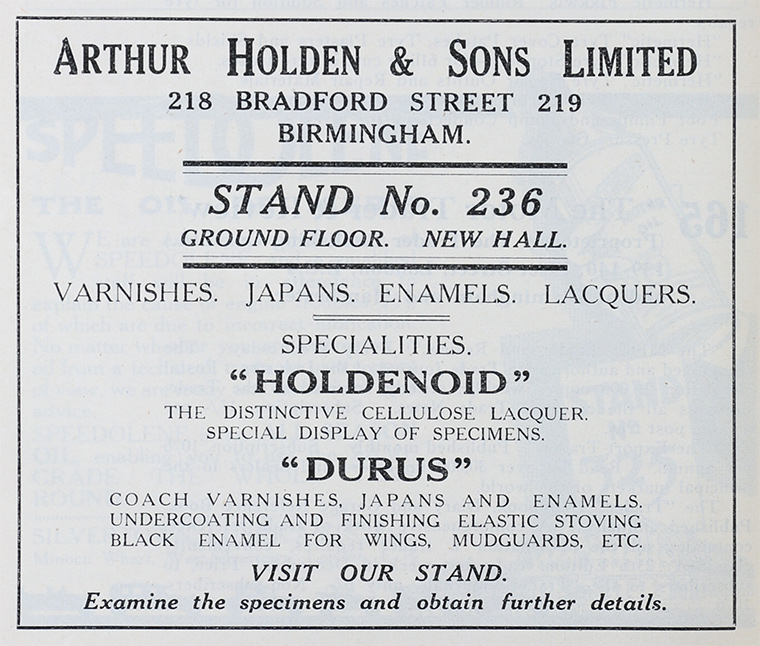 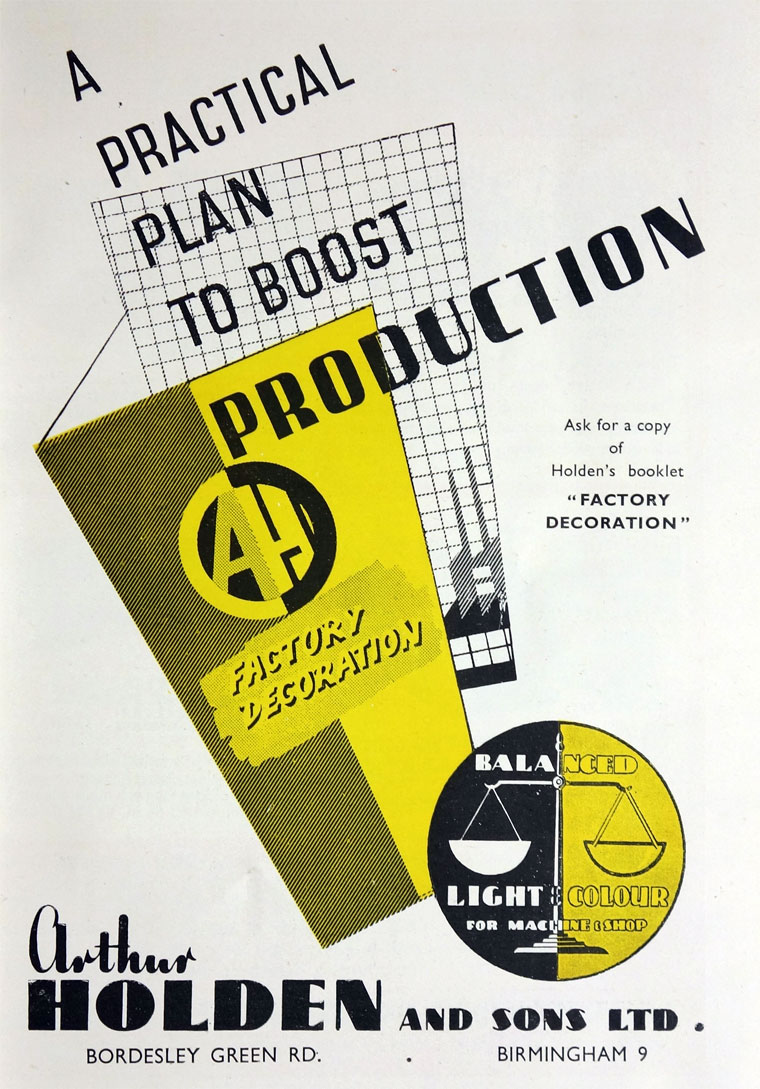 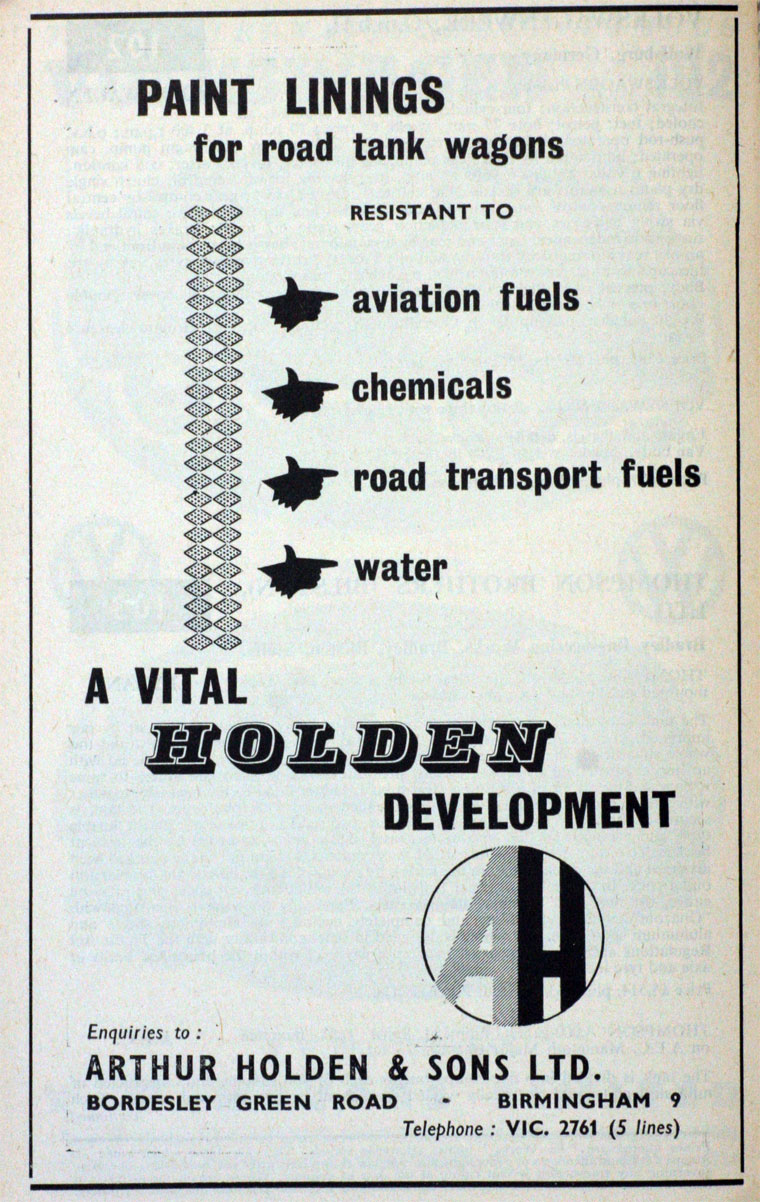 The Holden group originated in a small business established in Birmingham in the 1830s, manufacturing, among other things, varnish for church pews and black enamel for tin trunks.

1865 That business was acquired by Mr. Arthur Holden. Under Mr Holden's ownership the business grew and prospered, the firm's products changing to meet the requirements of new trades.

1888 With the advent of tin cans during the 1880s, Mr Holden became, in 1888, one of the first producers of the interior coatings required for cans used for food. This part of the business did not, however, acquire any real significance for another 40 years, the company in the meantime being more concerned with gold and black varnishes for the bedstead and tinware trades and other general industrial finishes.

1898 A private limited company, Arthur Holden and Sons Limited (now the parent company of the group), was incorporated to acquire the business. The shares in this company were held mainly by Mr. Holden and his family.

In the subsequent decades, and particularly during and after the First World War, there was rapid growth in food canning. To meet the diverse coating requirements of can manufacturers the company undertook considerable research and development work and produced coatings of increasing sophistication.

1937 Listed Exhibitor - British Industries Fair. Paints, Enamels, Lacquers, Varnishes, Japans and Finishes of every description, including Synthetic and Cellulose finishes. Applicable to every trade. (Stand No. A.524)

Post-WWII. With the return of peace, the company set about re-establishing its export business. Increasing diversity in customers' requirements and special local and national needs, however, made it more difficult to serve the European market effectively by exports from the United Kingdom.

1960 The company decided to open a factory in continental Europe. As the company was then exporting heavily to France, a site for the new factory was found at Elbeuf, south of Rouen. A subsidiary company, Holden Europe SA, was incorporated in France to operate the factory.

While the company was primarily engaged in the production of coatings for cans and closures in the United Kingdom and overseas, it also looked to other markets where its technological skills could be exploited.

1972 It acquired Edward Marsden which, until the early 1960s, was principally engaged in supplying inks for paper and cartons and then directed its attention to inks for the metal decorating market.

1977 Marsden moved into a purpose-built factory in Hull which provided additional production and laboratory space.

1979 it was decided to restructure the group. The principal changes involved were that a new company, Holden Surface Coatings Limited, was formed to take over the existing manufacturing and trading activity until then carried out in Birmingham by Arthur Holden and Sons Limited. Holden Overseas Limited was also formed to hold shares in the group's French subsidiary, Holden Europe SA, and to pursue new overseas investment opportunities. Adderley Services Limited was formed to regulate inter-company services.

1980 Arthur Holden and Sons Limited ceased to be a trading company and became the holding company of the shares in the group subsidiaries and of other assets in the United Kingdom. These changes took effect from 3 January. In July, Holden expanded its interests in France by acquiring some 70 per cent of the issued share capital of Galliacolor SA and Dauphilac SA, two French companies which operated from a factory near Lyon as a single entity producing rust preventive and corrosion resistant maintenance paints.