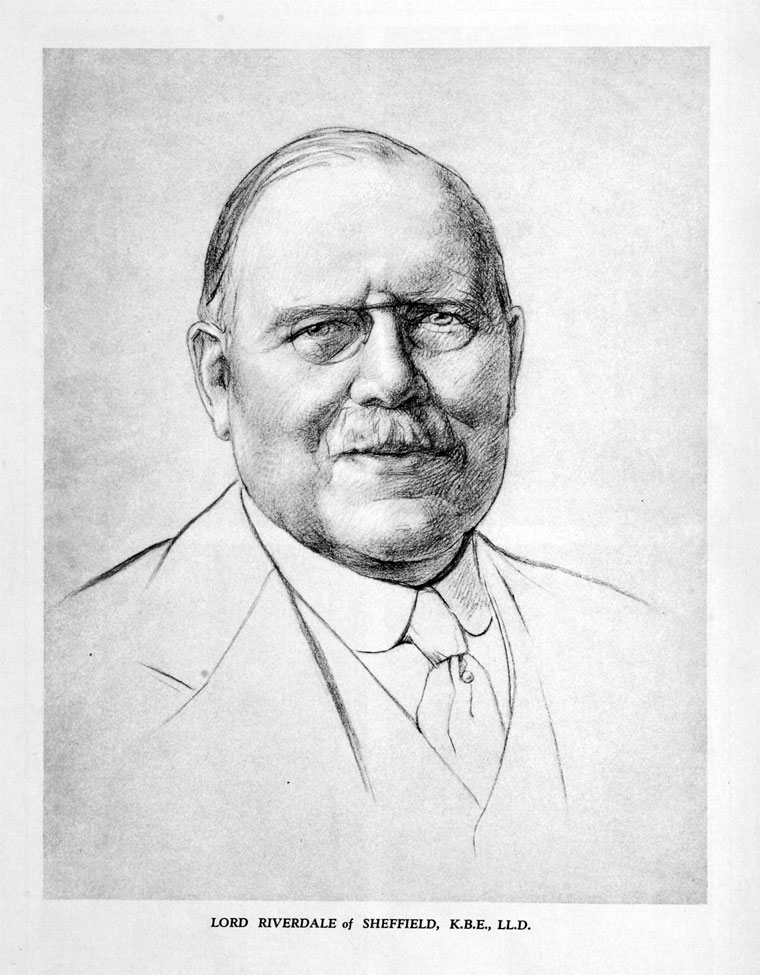 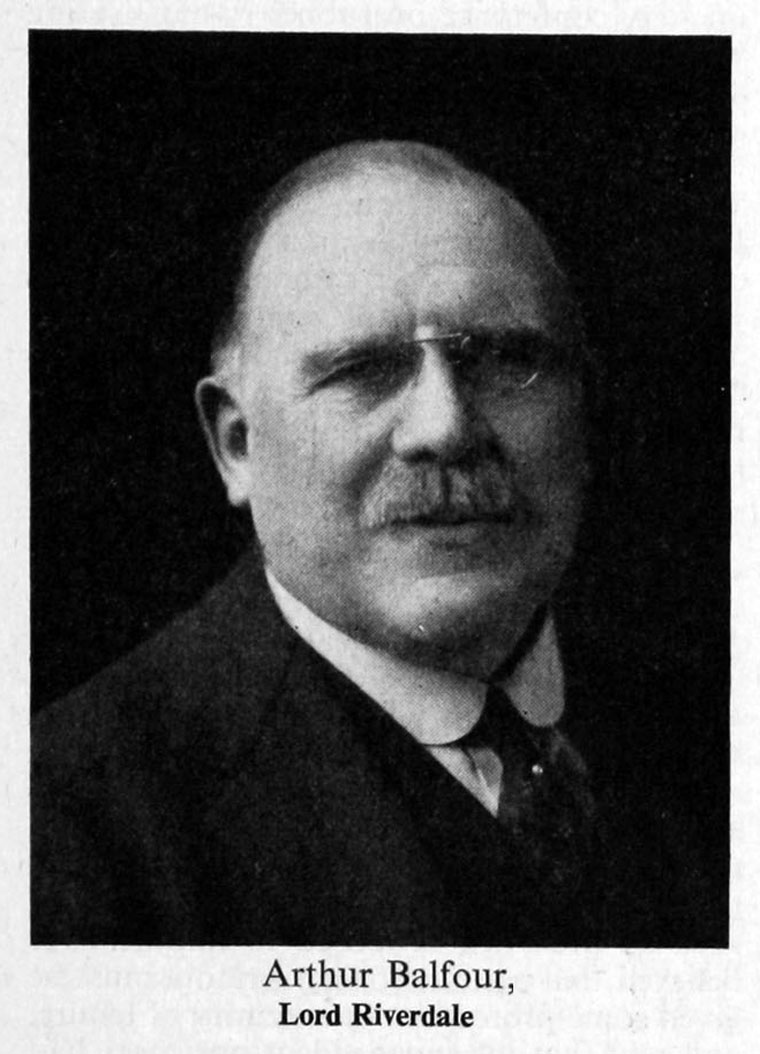 1882 Moved to Sheffield with his mother, described as an "orphan".

After school he was employed in the office of Seebohm and Dieckstahl, a Sheffield steel firm.

1890 His mother married Robert Schott, the head of the business.

1899 After the firm became a limited company, Arthur Balfour was appointed Schott's successor as managing director of Seebohm and Dieckstahl

Chairman of Arthur Balfour and Co and of C. Meadows and Co, both of Sheffield, and High Speed Steel Alloys Ltd.

1923 President of the British Chambers of Commerce from 1923 for a year.

1937 Chairman of the Advisory Council for Scientific and Industrial Research from 1937 to 1957.

1947 President of the The British Council for 3 years

1957 July. Died aged 84, and was succeeded in his titles by his eldest son Robert.

LORD RIVERDALE of Sheffield died at his home at Sheffield last Sunday, July 7. He was eighty-four, and up till a few years ago was chairman and managing director of Arthur Balfour and Co., Ltd., the steel manufacturing firm, which he entered as a youth.

Arthur Balfour, Lord Riverdale, was born in London, and was educated at Ashville College, Harrogate. He began his industrial career in a junior position with his family's steelmaking company, and while still in his 'teens went to America in order to obtain some general experience of engineering methods in that country. For part of that period he assisted in some research work into metal melting methods and was also concerned with some experiments which, it has been stated, led to the industrial development of electric melting furnaces.

A few years later, in 1899, Lord Riverdale set out on a world tour to visit the overseas branches of Arthur Balfour and Co., Ltd. (sic), and to open new ones. During the tour he again spent some months in the U.S.A. and visited, among other plants, the Bethlehem Steel Works. There, he studied a new metalcutting technique. Lord Riverdale's interest in the matter was such that he bought an option on the process for eight weeks. Consultations with some British firms ensued and there then followed some experiments which resulted in the first high-speed steel made in this country.

Lord Riverdale's distinguished career in the Sheffield steel industry was combined with an outstanding record of public services. At the turn of the century he was Vice-Consul for Denmark in Sheffield, and for the two years 1911 and 1912 he was elected Master Cutler. Just prior to the first world war Lord Riverdale served as a member of the Royal Commission on Railways. Inevitably, during the war years, Lord Riverdale was called upon for many services. Throughout the whole of the first world war he was a member of the Treasury's industry advisory committee; subsequently, he was appointed to the advisory council for scientific and industrial research, to the engineering industries committee, and to Lord Balfour's committee on commercial and industrial policy. At the end of the war, Lord Riverdale was elected president of the Sheffield Chamber of Commerce and in 1923 became president of the Association of British Chambers of Commerce.

In the same year he was appointed to the advisory council of the Department of Overseas Trade and to the advisory council of the Board of Trade. A year later, Lord Riverdale was invited to take yet another important task when be became chairman of a Government committee on industry and trade. The final report of that committee appeared in 1929 and was a thoroughly detailed document in nine sections dealing with just about every aspect of British industry in the years which followed the post-war boom. In recognition of his work on this committee and in many other spheres of public service, Lord Riverdale was created a baronet in 1929, having been made a K.B(E. six years earlier. He was elected to the peerage in 1935, and was created G.B.E. in 1942.

We have mentioned but a few of the important offices held by Lord Riverdale. There were numerous others, including the chairmanship of a United Kingdom Trade Mission to Egypt in 1931, and membership of the grand council of the Federation of British Industries and of the council of the Machine Tool Trades Association. He became chairman of the Advisory Committee of the Privy Council for Scientific and Economic Research in 1937, and subsequently headed the British Air Mission to Canada. Another interest of Lord Riverdale was the work of the British Council; he was appointed vice-chairman in 1935 and served as president from 1947 to 1950. Then, too, Lord Riverdale took an active part in encouraging the formation of the Production Engineering Research Association; when that body was established in 1946 he became its first president.

Finally, reference must be made to Lord Riverdale's work, throughout the second world war and subsequently, for the Royal Air Force Benevolent Fund; he was chairman of the committee of management for several years.