(Redirected from Armstrong, Whitworth and Co)
Jump to: navigation, search 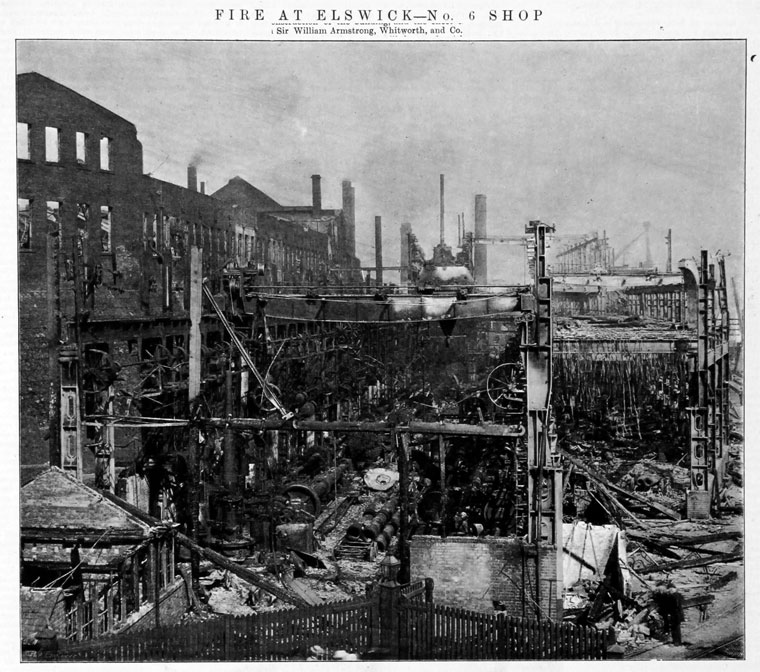 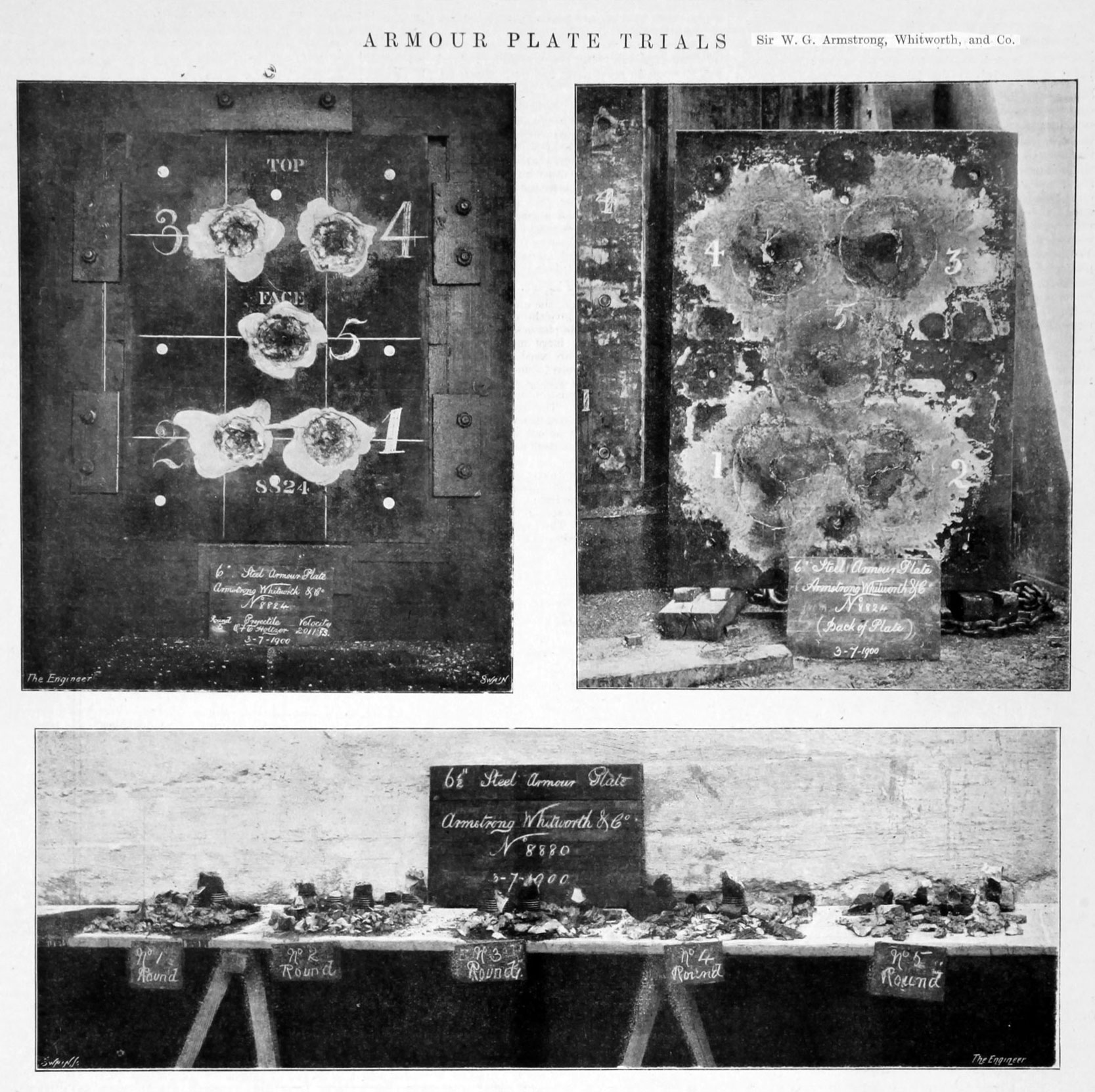 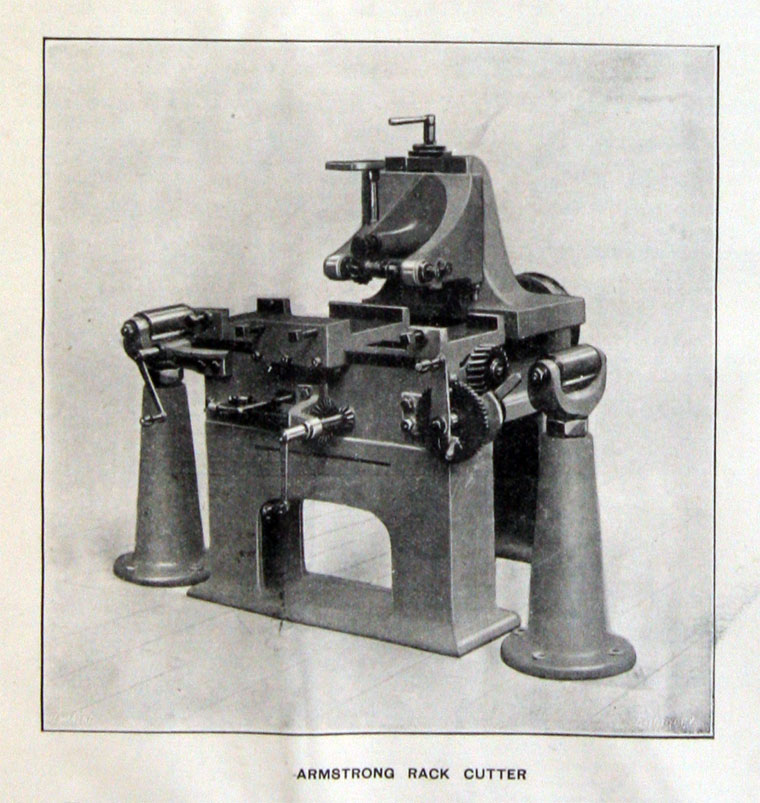 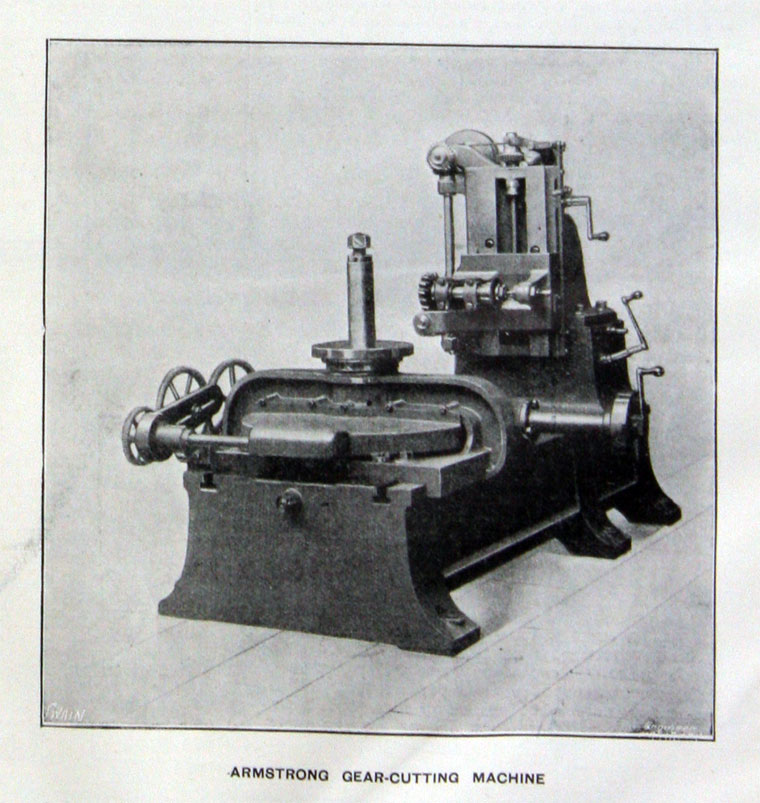 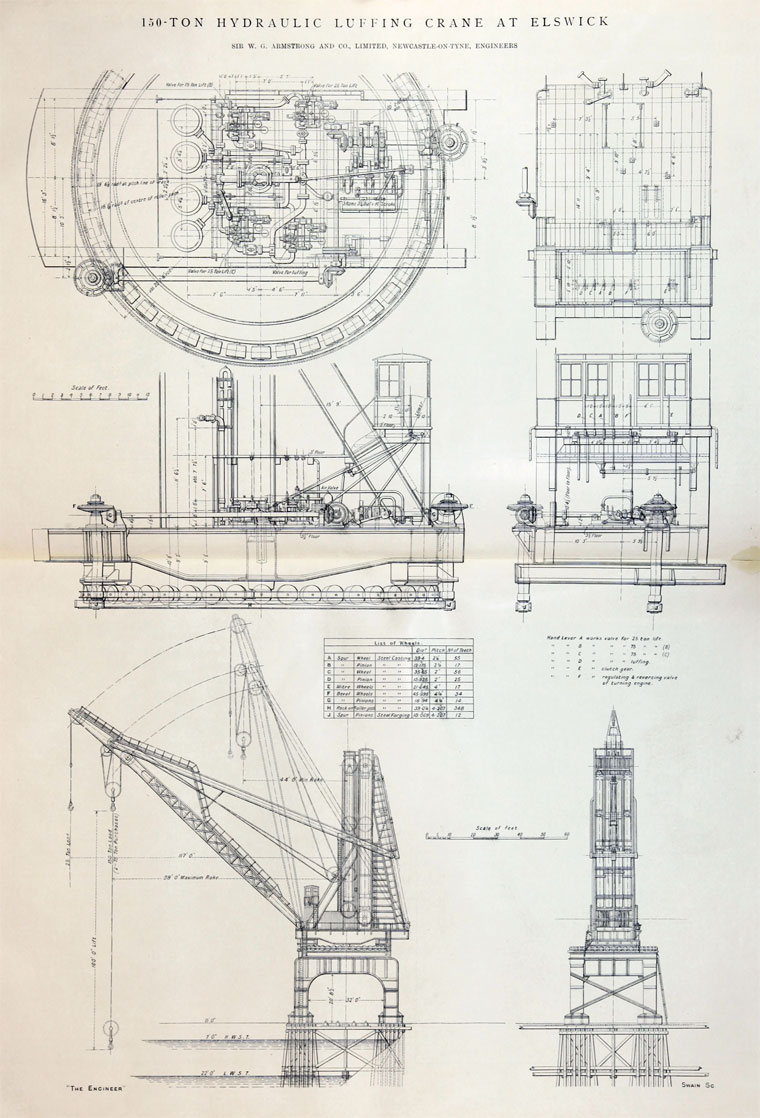 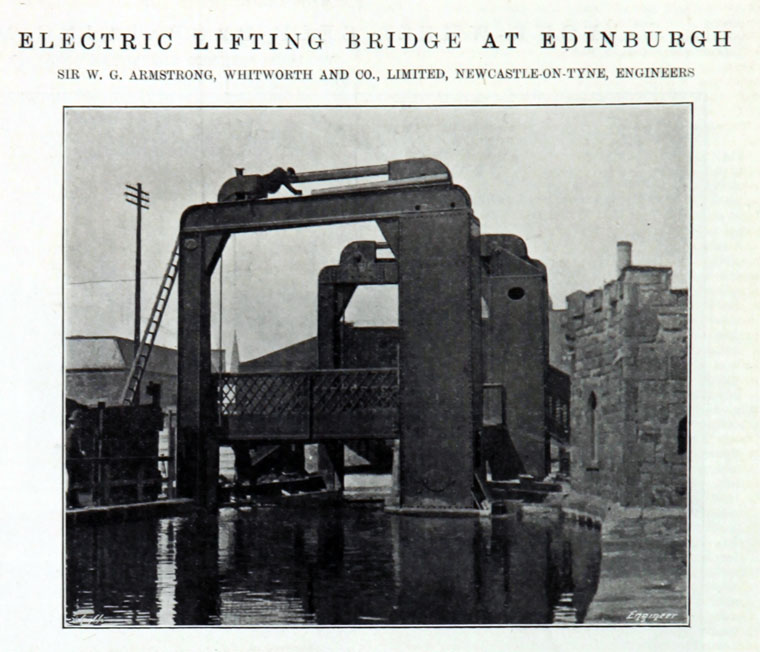 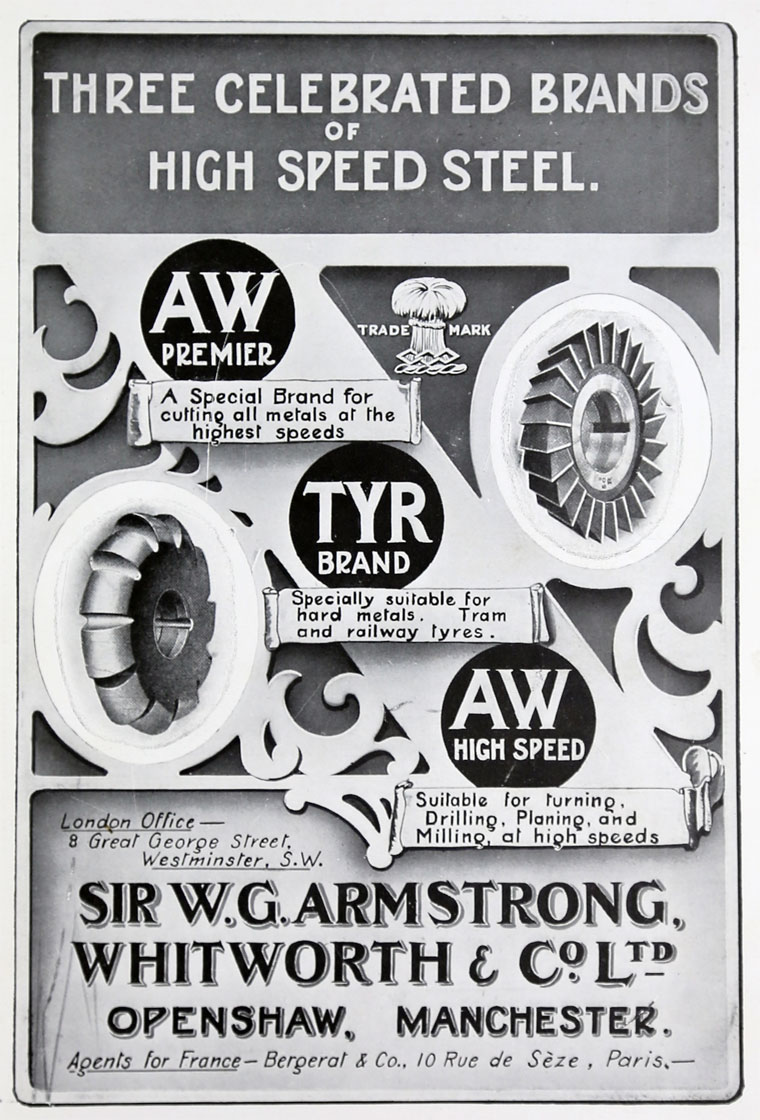 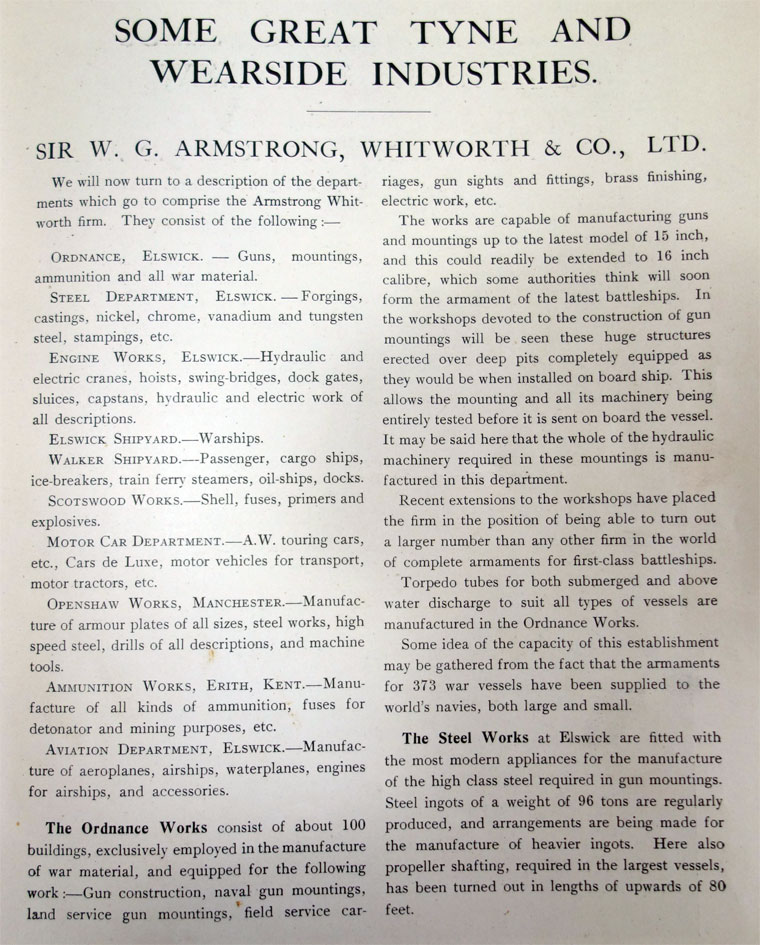 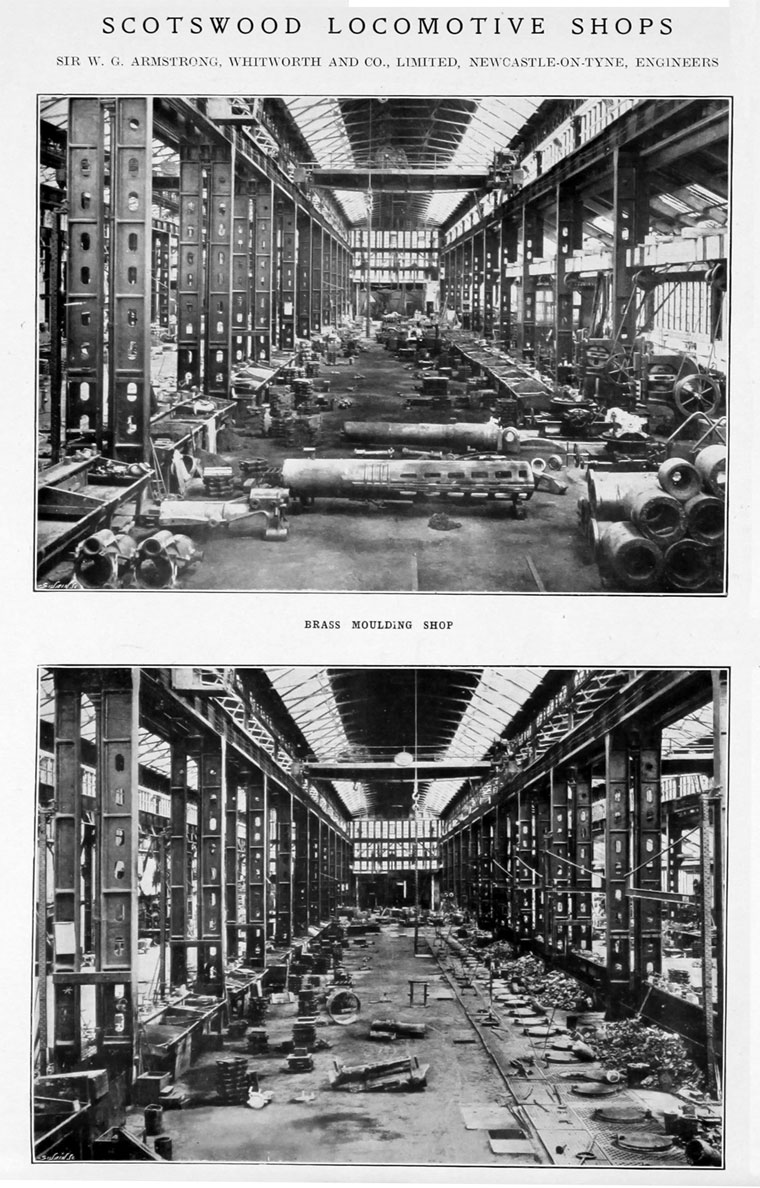 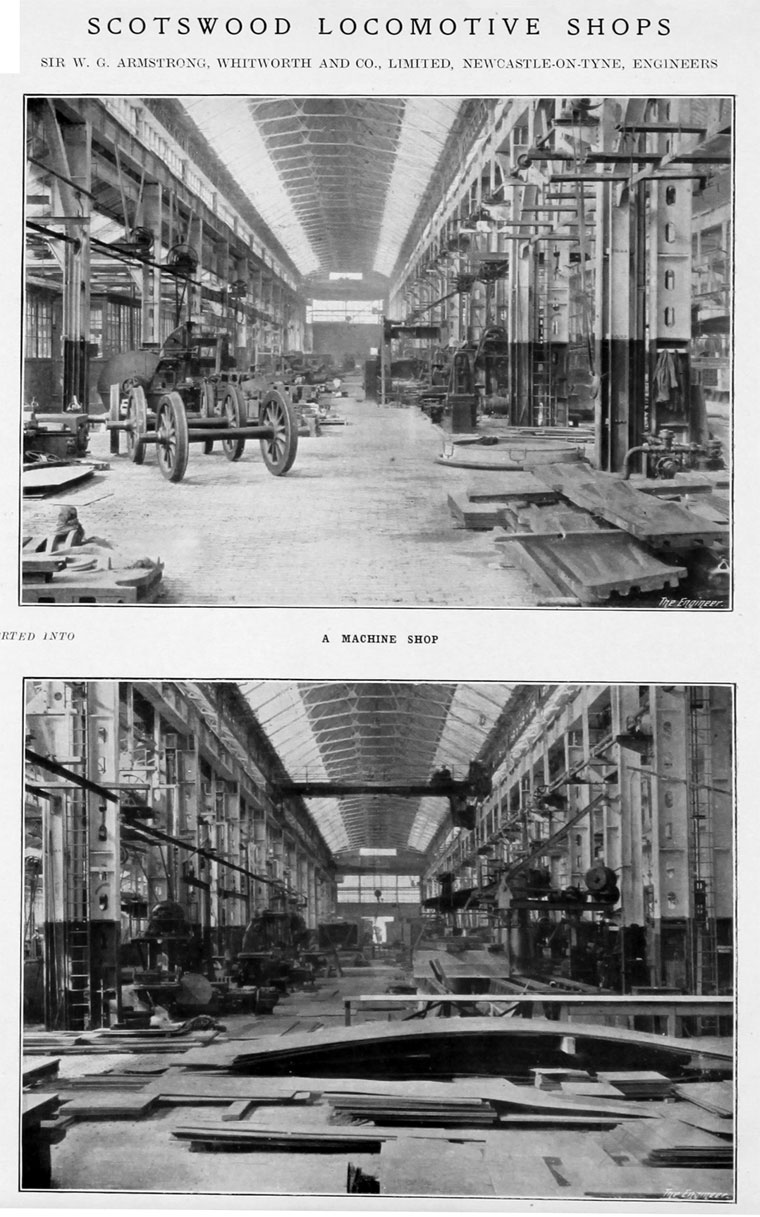 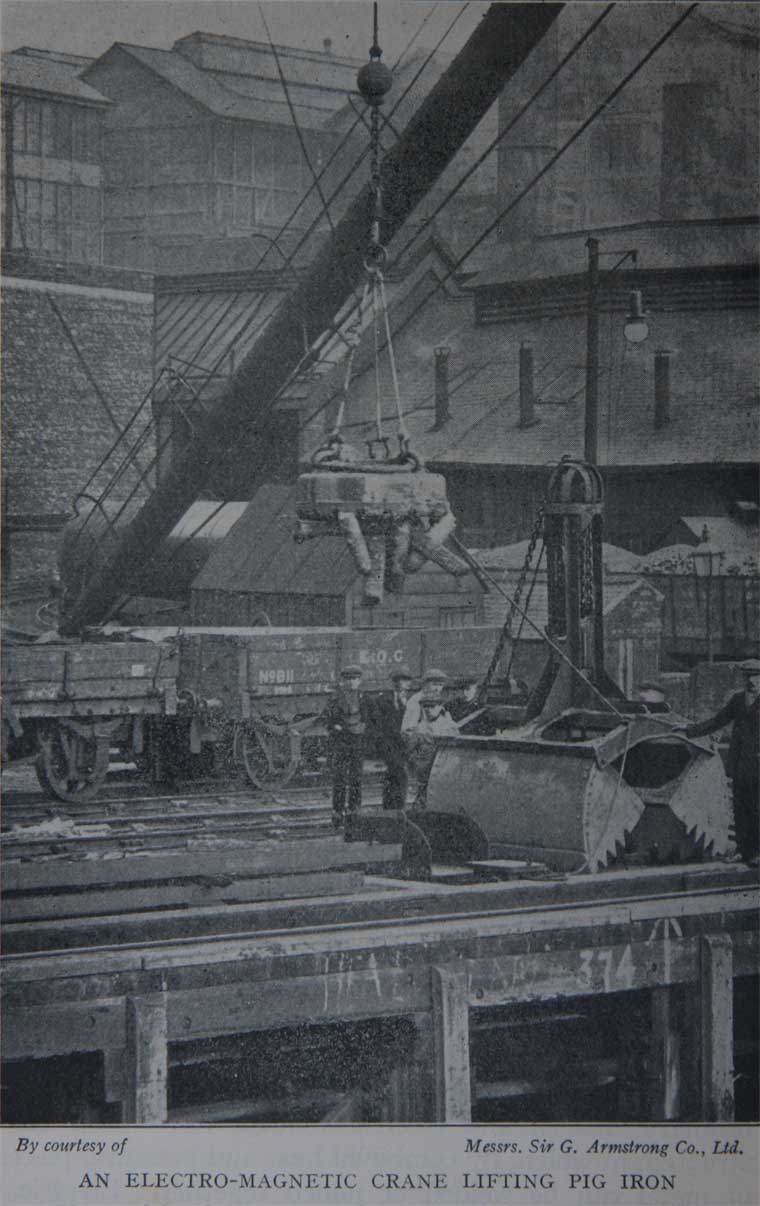 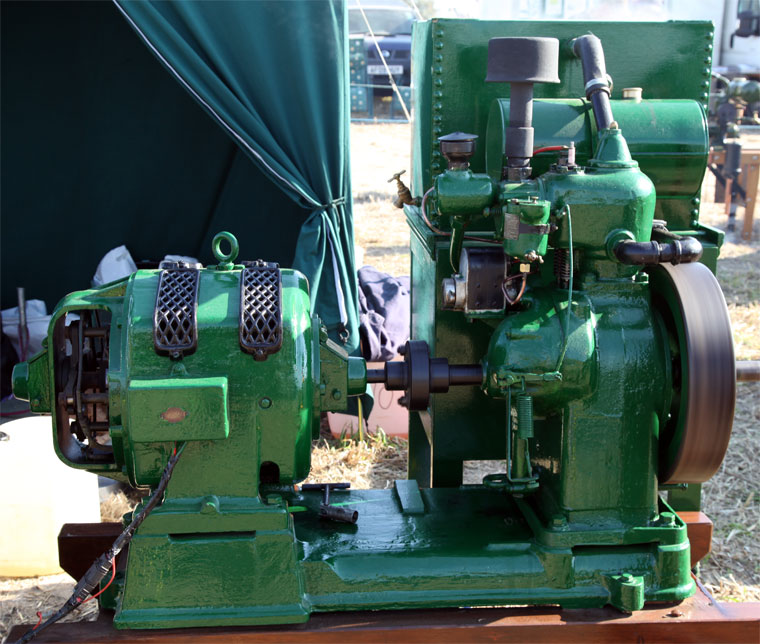 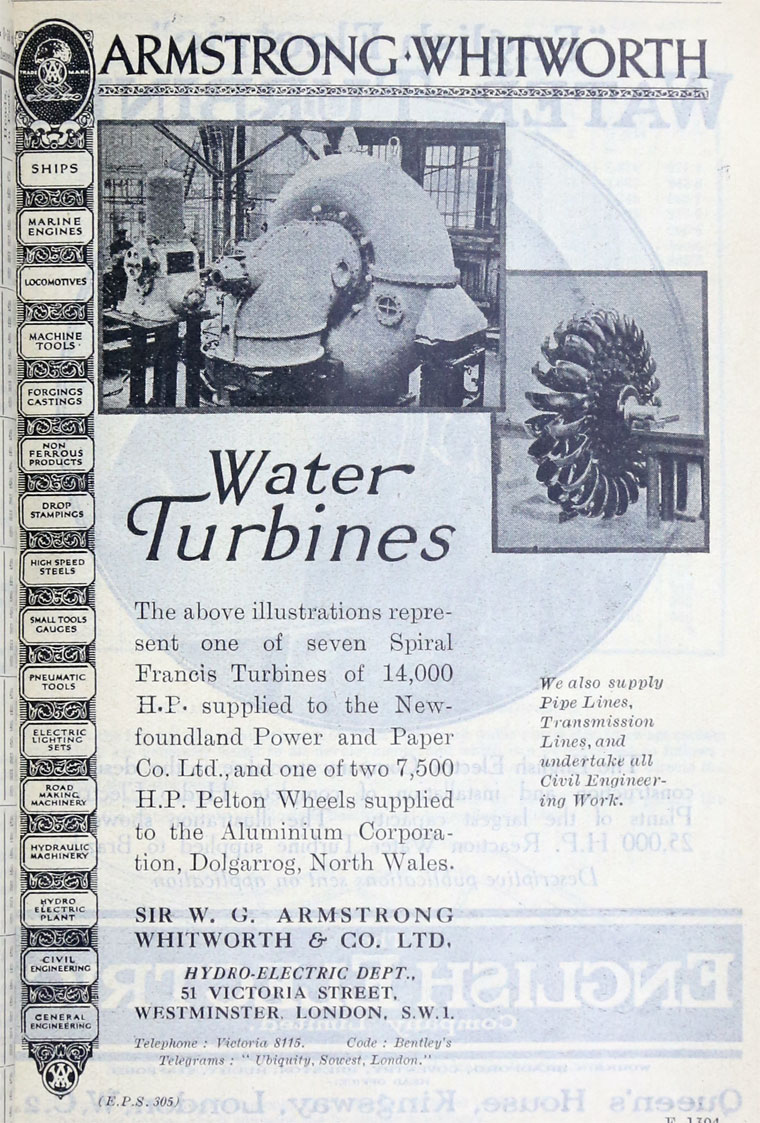 1929. Plan of the New Boiler Shop at the Scotswood Works. 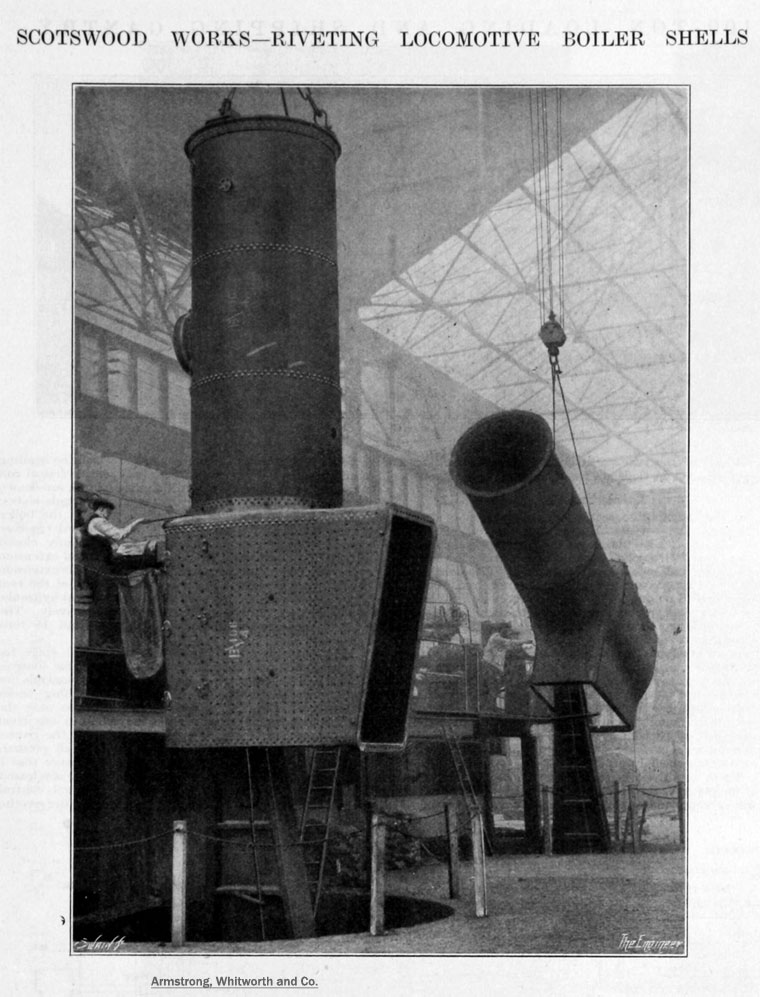 1929. 100 Ton Loading and Shipping Gantry at the Scotswood Works. 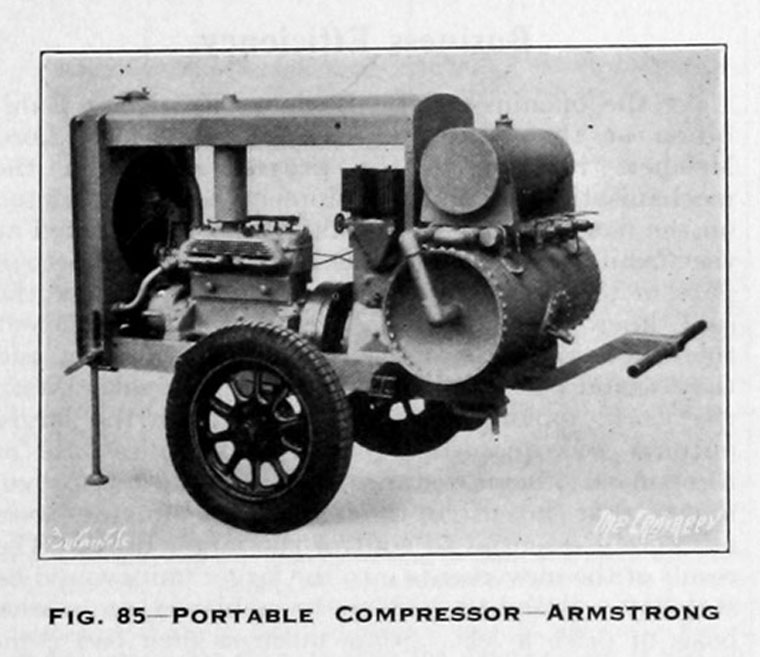 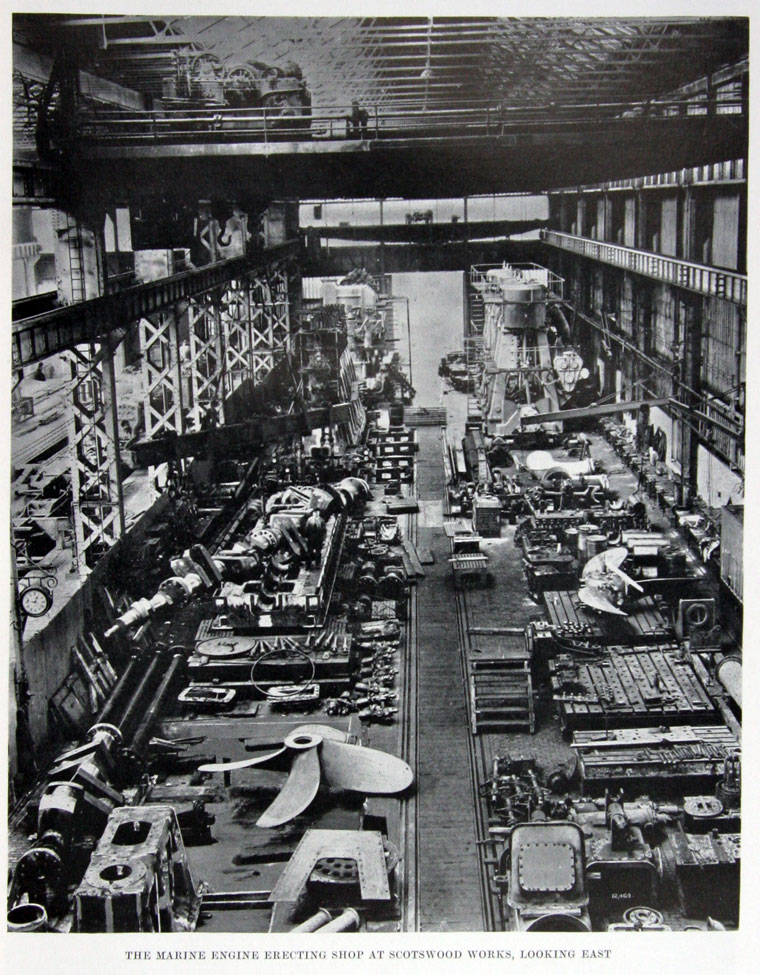 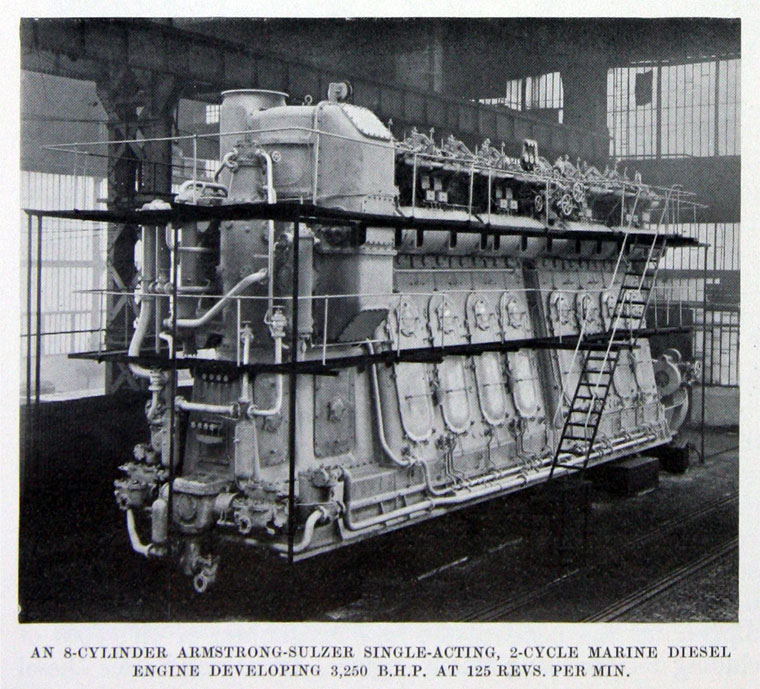 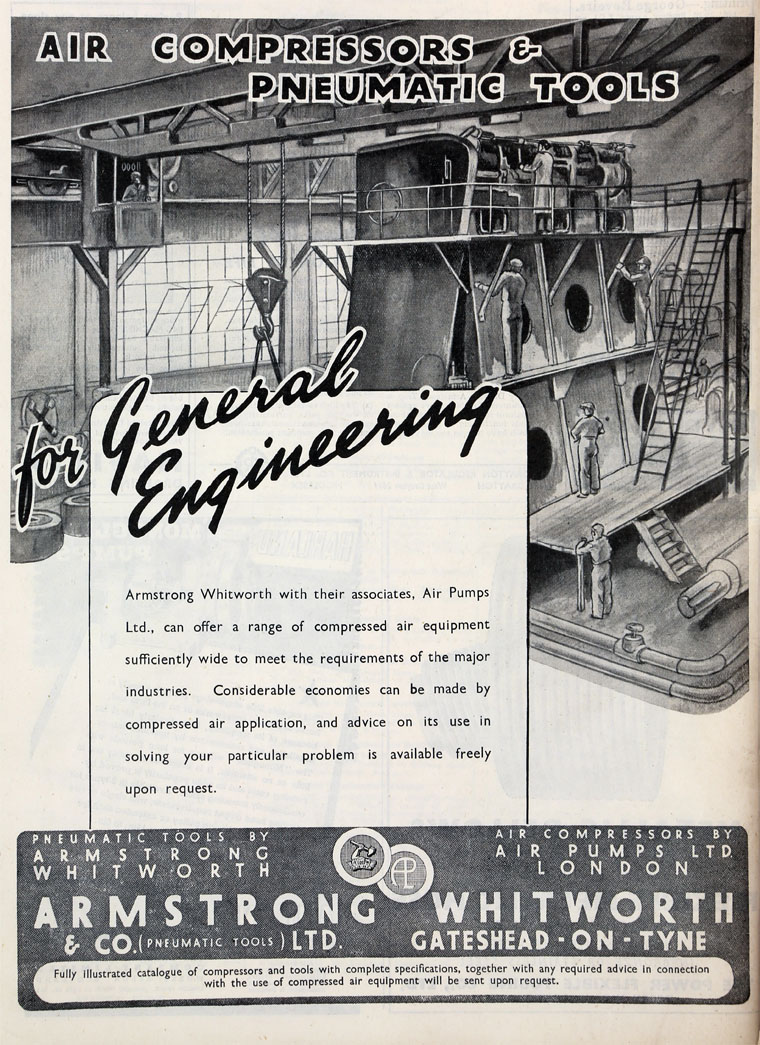 1896 Armstrong, Whitworth was registered as a company on 31 January.

1902 The company expanded into the manufacture of cars and trucks, initially vehicles designed and developed by other companies.

Andrew Noble was dynastic in his approach to his succession, promoting two of his four sons as directors of the company.

1906 Began making their own design of car

1915 Armstrong Whitworth made arrangements to make use of the facilities at the works of A. and J. Main and Co for constructional steelwork.[2]

1919 In order to reduce the dependence on armaments work post-war, in favour of engineering, the company formed a subsidiary Armstrong Whitworth Development Co[3].

1919 Armstrong Whitworth purchased a controlling interest in Crompton and Co in order to secure the supply of electric motors for its machine tools produced in Manchester; this was expected to provide the basis for development of large electrification schemes. Also purchased a controlling interest in A. and J. Main and Co of Glasgow, constuction engineers and formed Armstrongs and Main; the engine works were transferred from Elswick to Glasgow to enable the new company to offer the complete supply for construction projects, such as pumps and docks[4].

1920 Armstrong Whitworth acquired a controlling interest in Pearson and Knowles Coal and Iron Co, including its subsidiary Partington Steel and Iron Co[5].

1920 Issued pamphlet promoting their capacity to produce forgings and castings.

1922 In July the Company had set up a separate subsidiary company called Newfoundland Power and Paper Utilities Corporation Ltd. to finance a scheme to build 400 tons/day newsprint mill in Newfoundland.

1923 The hydro-electric department was moved from 8, Great George-street, to 51, Victoria-street, where additional accommodation was taken adjacent to that occupied by the same firm's civil engineering department. [6]

Armstrong Whitworth and Co invested £5M in the Newfoundland Power and Paper Co's mill at Cornerbrook, NFLD, Canada, which went substantially over budget; the company covered the loss with an overdraft. The paper mill never produced anywhere near its maximum output and was eventually sold with a loss of £2.8M. This in turn limited the cash flow of the Company and the whole group collapsed.

1925 The company acquired from the receiver of the Boving Engineering Co the goodwill, plans, patterns etc. of the Boving pump.[8]

1926 Armstrong Whitworth and Co Ltd losses amounted to £625,767 for the first 11 months of 1926. Full details of the state of the company were presented to the general meeting[9].

1926 'Important additions to the board of directors have been appointed: Mr John Davenport Siddeley the managing director of Armstrong Siddeley Motors; Mr J. Hawson of Edinburgh, the late vice-president and director of the Algoma Steel Corporation; and Mr J. P. Davison the general sales manager of Armstrong Whitworth. At the same time certain changes in the management of the company have been made. Mr J. Frater Taylor has been appointed vice-chairman of the board and chairman of the executive committee; while Mr John Davenport Siddeley becomes the senior managing director and chairman of the committee of management, giving his special attention to the manufacturing side of the company's business. With the changes indicated, the board for the most part will now consist of active directors. The shipbuilding branch of the business is in future to be self-contained, for this purpose a management corporation has been formed, of which Sir Eustace Henry William Tennyson d'Eyncourt, late director of Naval Construction, is chairman, and Mr James Stewart the managing director.'[10]

In 1927, the defence and engineering businesses were merged with those of Vickers to create a subsidiary company known as Vickers-Armstrongs. Vickers would be the major partner in the new company with two thirds of the shares (worth £8.5M); Armstrong Whitworth received one third of the shares (worth £4.5M). The company sold the Development Co, including the aircraft and motors businesses, to J. D. Siddeley who renamed it Armstrong Siddeley Development Co. Armstrong Whitworth retained a substantial shareholding[11].

1927 Sir William Armstrong, Whitworth and Co retained its interests in Pearson and Knowles Coal and Iron Co and Partington Steel and Iron Co after the merger of other parts of the company with Vickers[12].

1927 Also see Aberconway for information on the company and its history.

1929 The company had a controlling interest in Craven Brothers of Manchester, whose business improved through the year[15]

1933 Reserve Flying School, operated a school of flying for officers of the R.A.F. Reserve.[17]

1934 The activities of the Armstrong Whitworth group were General Engineers, Shipbuilders and Iron-founders, with particular interests in the development of transport by rail, sea and road. The parent or holding company was Armstrong Whitworth Securities Company Ltd. The principal operating companies were:

1935 Vickers acquired the remainder of the share capital of Vickers-Armstrongs that it did not already own from Armstrong Whitworth Securities Company and other investment companies[18].

1937 Sir John Jarvis acquired the whole of the share capital of the Sir W. G. Armstrong Whitworth and Co. (Ironfounders) Ltd, and that of Jarrow Metal Industries, in order to relieve unemployment on Tyneside.

1937 Decision that the remaining business should concentrate on defence equipment (a decision which was agreed with Vickers-Armstrongs) and should get out of railway locomotive building [19].

1942 Armstrong-Saurer Road Vehicle Service was one of the few assets remaining in Armstrong Whitworth Securities Company Ltd before it could be wound up [20].

1943 Since the sale of the Scotswood plant in 1937, the board had been planning on an orderly wind-down of Armstrong Whitworth Securities Company Ltd; they had realised the holding in Partington Steel and Iron Co; the final assets to be sold were Sir W. G. Armstrong Whitworth and Co (Engineers) Ltd and the rights to the Kadenacy process, so the holding company was then liquidated [21].