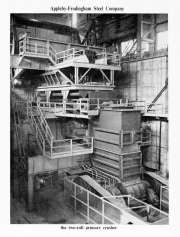 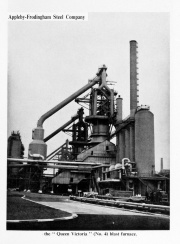 1864 Work began on the Frodingham Ironworks, near the village of the same name and now part of Scunthorpe. The first furnace was blown-in during May 1865. The first casts gave a daily make of five tons; later this was increased to twelve tons.

The output of the early producers in the Scunthorpe was basic pig iron which was suitable for forging but less useful for foundry work because of its relatively high manganese content. Much of the pig iron was therefore sent to the bar, sheet and wire trade of Staffordshire.

1887 Crude steel was first made at Frodingham, but this was considered not to be viable.

1890 Frodingham Iron Co made the first steel in the area by the basic process of Sidney Gilchrist Thomas, after seeking outside specialist help[1].

1912 The Appleby-Frodingham Steel Co was formed by Frodingham Iron Co's take-over of the Appleby Iron Co. These 2 companies, located in villages near Scunthorpe, were amongst the areas oldest iron producers in the area.

1918 Joined Steel, Peech and Tozer and Samuel Fox and Co to form United Steel Companies, providing a source of ore and basic pig iron for the works in Sheffield.

1931 The Frodingham plant absorbed the North Lincolnshire Iron Works and the Trent Iron Works in 1936.

The Scunthorpe Works of Corus, formerly the Appleby-Frodingham Steel Co, has been producing iron since 1865 and steel since 1890. It remains one of the UK's premier steel plants with a current capacity of 4·8 Mt/year of liquid steel. Today the Works remains as an integrated site with a somewhat unique mix of products including heavy plates, sections, semi-finished billets and slabs, wire rods and fabricated construction products, with rails being introduced from 2007.