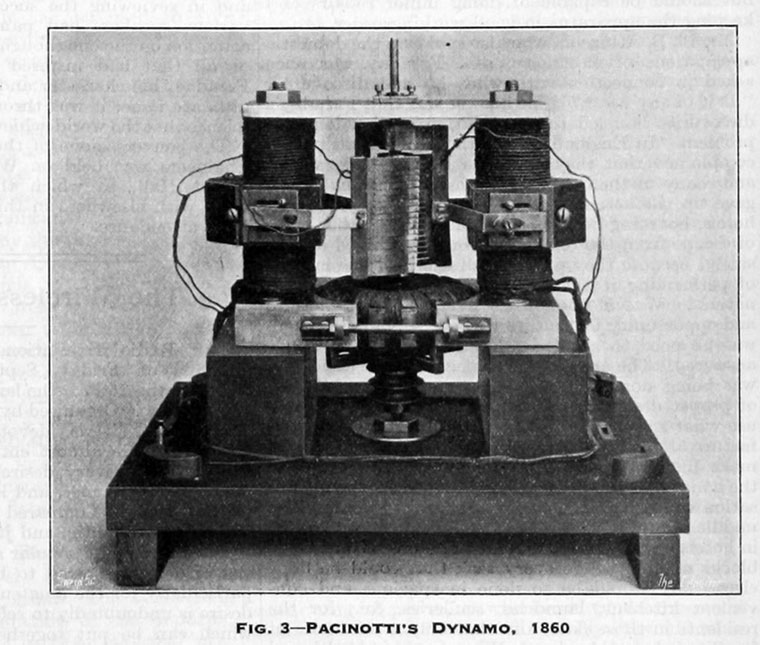 Pacinotti was an Italian physicist and Professor of Physics at the University of Pisa.

1860. Invented an improved form of direct-current electrical generator (dynamo), and described it in a paper published in Il Nuovo Cimento of 1865.

It used a ring armature around which was wrapped a coil of wire, to produce a smoother current than that available from previous types of dynamo. He found that the device could also be used as an electric motor.

July 1862, One of several independent discoverers of the comet 109P/Swift-Tuttle. [1]

At Pisa he attended the Laboratory of Applied Physics, where his father, Luigi Pacinotti, was Professor. At this time (1858) his attention was directed to a special type of electromagnet, termed by him a "transversal magnet," now generally known as a ring electromagnet. His experiments on this form of magnet may undoubtedly be set down as marking the first phase of his advance which led eventually to his continuous current dynamo.

However, Pacinotti's experiments were destined to be interrupted, for in May, 1859, he had to leave Pisa, in order to serve in the Garibaldian wars, where he was sergeant in the Tuscan division of the engineers. During this strenuous time Pacinotti was still pondering over the problem of how to increase the induction of his cores (or, as it would now be looked at, seeking to reduce the magnetic reluctance of the circuit); and the toothed ring armature was the result, so that the invention may be said to have originated on the battlefield.

On his return to Pisa in 1860, Pacinotti went on with the construction of his machine, with the single continuous ring winding, which then assumed definite shape. His experiments with this machine are fully described in the memorable issue of "II Nuovo Cimento" of 3rd May, 1865.

The later work of Pacinotti resulted in the invention of several different forms of dynamos, but at the same time he continued his regular work of teaching physics at the University of Cagliari, and later at Pisa, where he was appointed Professor, after the death of his father. An examination of Pacinotti's published researches and the sketches therein, shows that even at that time, when the general conceptions regarding electrodynamics and magnetism were so uncertain and obscure, he had, with unerring genius, obtained a very clear grasp of the phenomena concerned. Thus we find that as a result of his early investigations on ring magnets, he proposed a system for the transmission of angular movements, by leading in the current into different portions of the ring. A very few steps further in this would probably have brought him up against the problem of the rotating magnetic field, which later on was so ably demonstrated and applied by his fellow-countryman, Ferraris.

Professor Pacinotti was elected an Honorary Member of the Institution in 1902. He was awarded the Order of the Crown of Italy, the Order of Merit of the House of Savoy, was a Chevalier of the Legion of Honour, and the recipient of numerous other distinctions.