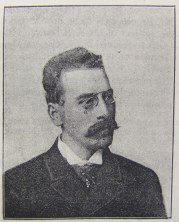 1872 Came to England and became a draughtsman for Miller and Ravenhill.

Later transferred to Easton and Anderson.

Established evening classes for the workmen, lecturing in machine construction and drawing, and steam. First, however, he had to qualify himself under the rules of the South Kensington Science and Art Department in these subjects, which he took with first class honours. Afterwards he attended the course of lectures given to qualified science teachers at the Royal School of Mines in 1877 and 1879. Again he obtained first class passes in steam and mechanics.

After visiting the Paris Exposition of 1878, he determined to pursue a career in electrical engineering and attended Professor William Edward Ayrton's lectures at Finsbury Technical College which later became the City and Guilds. At the time of his death he was vice-president of the Old Students' Association of that body.

He returned to Paris for the 1881 exhibition, studying the electrical exhibits at the Palais d'Industrie over three months. When he returned to England, he briefly joined the Faure Electric Accumulator Co before accepting the post of engineer to the Electrical Power Storage Co.

In connection with the E.P.S. company he undertook much original and pioneering work on various forms of electric traction. In 1882 he designed the first significant electric launch driven by storage batteries, named 'Electricity'. Soon afterwards he was building an electric tramcar which was exhibited in March 1883 on the West Metropolitan Tramways Company's line in London.

1885 Left the Electric Power Storage Co and embarked on his own company making electric motors, boats and tram cars.

He conducted numerous investigations into electric traction and patented improvements in secondary batteries, electric motors, electric meters and related devices. He was an early electric motor designer and, paid particular attention to bogie cars and worm gear in this connection. This was not a great success on full-size vehicles but was later very widely used on electrically powered model railway locomotives.

His storage battery tramcars were tried out on a number of tramlines, in the U.K. but mainly in the US, where his inventions were assigned to the Electric Car Company of America and his brother Frederick Reckenzaun, based in New York developed associated electrical businesses and was his representative there.

His traction motors were applied to the first large scale telpherage system for the Sussex Portland Cement Co at Glynde in 1885. The telpherage system, had originally been tested on the estate of Mr M. R. Pryor at Weston, Somerset and also a line in Peru by Professor Fleeming Jenkin in association with Professors William Edward Ayrton and John Perry and the Telpherage Co.

Perhaps one of his most noteworthy developments came in electric launches. On 13 September 1886 the boat Volta made the double voyage from Dover to Calais and back. He also built perhaps the first significant electric boat in the United States, named Magnet.

He was a member of, and contributor of papers to, various professional and scientific bodies, both English and International. In 1882 he was elected a member of the Society of Arts. On 16 January 1884 he read a paper before that society on 'Electric Launches'.[7] On 20 April 1887 he gave a paper on 'Electric Locomotion'. For this latter paper he received the society's silver medal.

On 1 November 1887 he was elected an Associate Member, and on 6 December the same year, a Full Member of the American Institute of Electrical Engineers.

In 1889 he was elected to the Society of Telegraph-Engineers and Electricians now the Institution of Engineering and Technology. In December 1892 the I.E.E. awarded him the Paris Electrical Exhibition Premium for his paper on 'Load diagrams and the cost of electric traction'.

He also gave papers at the British Association, the American National Electric Light Association and the Vienna Electro-Technical Society.

In later years he associated himself with the General Electric Company and Greenwood and Batley and was a regular contributor to the electrical journals of the day.

1893 November 11th. Died. 'By the death of Mr. Anthony Reckenzaun, which occurred on Saturday at his residence at Stockwell, electrical science has lose one of its prominent workers. Mr. Reckenzaun's researches, experiments, and papers on important subjects made him famous in England, on the continent of Europe, and in America.'[2] 'Mr. Anthony Reckenzaun, well known in the world of electrical science, died on Saturday at his residence at Stockwell. He was born in 1850 at Graz. For the first 22 years of his life lived in, Austria.'[3]

1894 Estate claims. '... all creditors and other persons having any claims or demands against the estate of Anthony Reckenzaun, late of 34, Hemberton road, Stockwell, in the county of London, Electrician, deceased (who died on the 11th day of November, 1893, and whose will was proved on the 30th day of December, 1893, by William Wright, of 11, Beatrice-avenue, Plymouth, in the county of Devon, and William Baker, of 19, Sarsfield road, Balham, in the county of Surrey, the executors named therein...'[4]