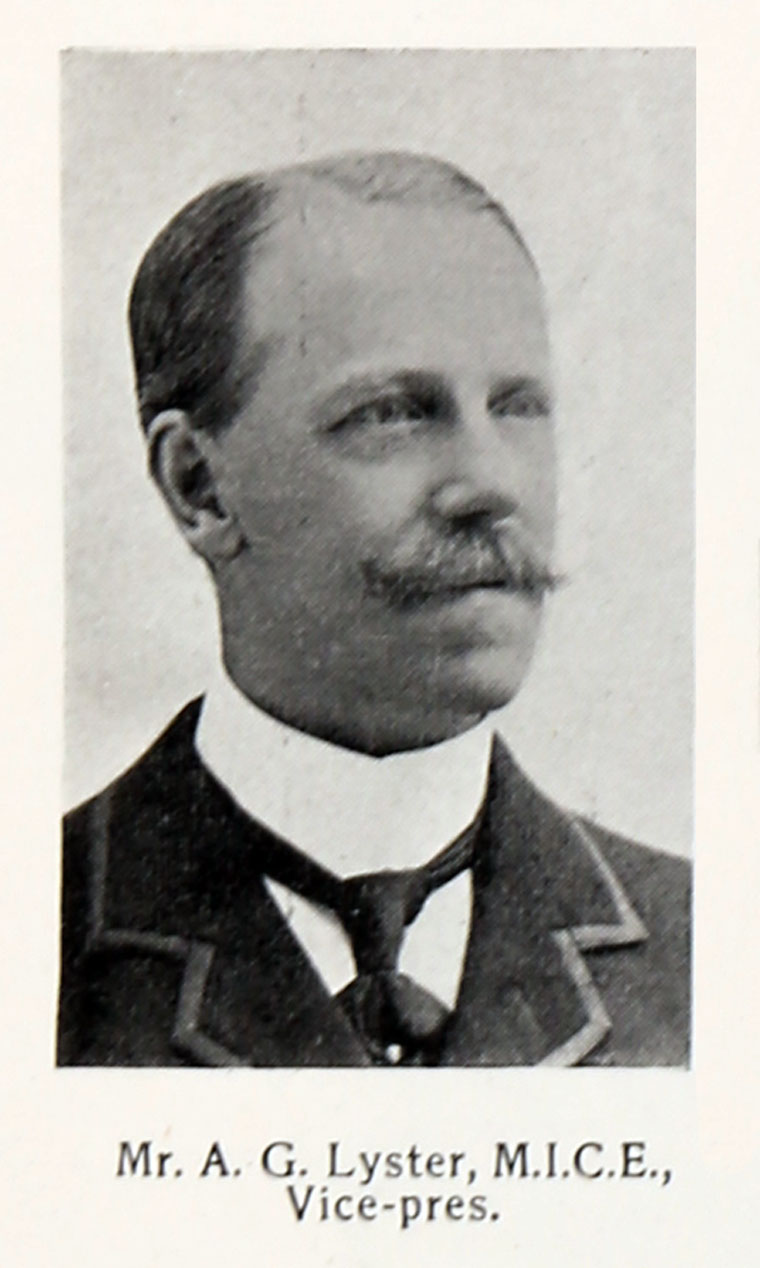 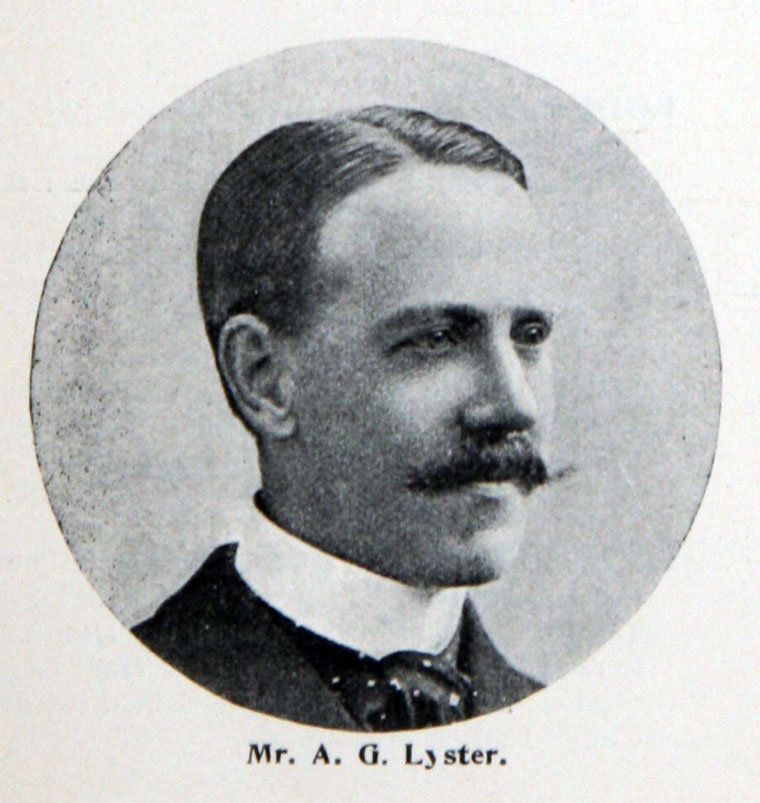 1904 'LYSTER, A. G., engineer of the Mersey Docks Estate, and Engineer-in-chief to the Port of London, is the vice-president of the Liverpool Self-propelled Traffic Association, and has long been a convert to the great possibilities of self-propelled traffic. Club: A.C.G.B. & I.' [1]

ANTHONY GEORGE LYSTER, Past-President, second son of Mr. George Fosbery Lyster, M. Inst. C.E., was born at Holyhead on the 6th April, 1852, and died in London on the 17th March, 1920. After four years at Harrow School (1867-71) and a year in Germany under a private tutor at Bonn, he became a pupil under his father, then Engineer to the Mersey Dock Trust. After a short term spent in the drawing-office of the Elswick works of Sir W. G. Armstrong and Company, Newcastle-upon-Tyne, he returned to Liverpool, and was placed in charge, from the beginning of 1877, of the construction of the north and south dock extension works at Liverpool. These works, which had been sanctioned in 1873, to the designs of his father, involved a cost of about 4 millions sterling and added to the port a water area of about 100 acres and 6 miles of quay. They were described in a Paper by Mr. G. F. Lyster, presented to The Institution in 1890.

He became Acting Engineer-in-Chief to the Mersey Docks and Harbour Board in 1890, and in the next eight years further development work, including the entire reconstruction of several docks, and involving the expenditure of 38 millions sterling, was undertaken under his direction. In 1898 he was appointed Engineer-in-Chief, and he held that position until 1913, when he became partner in the firm of Sir John Wolfe Barry and Partners. He continued to be the Consulting Engineer to the Mersey Docks and Harbour Board, and as such was responsible for the design of the Gladstone dock and the Mersey estuary revetment scheme. In the 50 years during which father and son were responsible for the engineering work of the Port of Liverpool, more than 13 millions sterling was expended on its docks.

Mr. A. G. Lyster adopted sand dredging on an extensive scale for dealing with the Mersey bar, and made important improvements in dredging plant. After some preliminary work, which he described in a Paper presented to the International Maritime Congress in 1893, the 3,000-ton hopper suction dredger "Brancker," fitted with a novel discharge system, was put into commission in 1893. Two others of similar capacity were added later, and in 1908 a fourth vessel, the "Leviathan," of 10,000 tons hopper-capacity, was built to Mr. Lyster's designs.

He was consulted at various times in connection with the improvement of other important harbours and ports, e.g., New York, Bombay, Port Elizabeth, and Shanghai. In 1908 he was appointed a member of the International Technical Commission for the Suez Canal. Mr. Lyster was a Lieut.-Colonel in the Engineer and Railway Staff Corps, and an Associate Professor of Dock and Harbour Engineering in the University of Liverpool, which conferred upon him in 1911 the Honorary Degree of Master of Engineering.

He married, in 1892, Frances, fourth daughter of the late Mr. R. P. Long, and sister of Viscount Long of Wraxall.

He was elected a full Member of The Institution in 1882, became a member of the Council in 1904, and was President for the year 1913-14. In his Presidential Address to The Institution he dealt with the subject of the constitution of port authorities as affecting the organization and development of ports.

ANTHONY GEORGE LYSTER, the son of Mr. George Fosbery Lyster, the late Engineer-in-Chief of the Mersey Dock Estate from 1861 to 1897, was born at Holyhead in 1852, his father being at that time engineer in charge of the work at Holyhead Breakwater.

He was educated at Harrow School and at Bonn, Germany, and entered the engineer's department of the Mersey Docks and Harbour Board as a pupil under his father in January, 1872, after which he passed some time at the famous Elswick works of Sir William Armstrong.

When the very large and important works, under the Act of 1873, at the North and South ends of the Liverpool Dock Estate were commenced, he was engaged on them in various capacities until 1876, when, Mr. A. F. Blandy having retired on account of ill-health, Mr. A. G. Lyster became directly responsible under the engineer-in-chief for these works. They cost on the whole four million sterling, and made a very large increase to the dock accommodation on the Liverpool side of the Mersey—over 30 per cent. of that existing at the time. The works in question consisted of the enlargement of the Canada Basin, the construction of the Canada Jetties and the Langton Dock, Branch Dock and Graving Docks, the latter being each 950 feet in length, the Alexandra Dock and Branch Dock, with their fine lay out of wide sheds, all suitable for the highest class of tonnage frequenting the port then and for many years afterwards, and the Hornby Dock, the last of this series at that time in the Northern district. The Southern group of Docks brought into existence by the same scheme were the Toxteth and Harrington Docks, an enlargement of the Herculaneum Dock, and the construction of an additional graving dock (No. 3) there. On the retirement of Mr. G. F. Lyster, Mr. A. G. Lyster succeeded him as Engineer-in-Chief of the Mersey Docks and Harbour Board.

In 1889, when the question of providing increased depths in the world's great channels was becoming important, and the improvement of the harbour of New York had been considered, and certain unsuccessful experiments made, it was decided, at the suggestion of Mr. Lyster, senior, to make an experiment by dredging at Liverpool, and for this purpose two of the Board's hopper barges, Nos. 5 and 7, were fitted up with pumping apparatus. A trial of these two small barges gave such encouraging results that Mr. A. G. Lyster proposed and received instruction from his Board to provide an appliance of much more powerful description, and the result was the design of the "Brancker," a sand-pump hopper dredger of unprecedented size, and having many features of an entirely novel character. This vessel was fitted with a hopper capacity of 3,000 tons, and capable of filling herself in three-quarters of an hour. Two years later followed the "G. B. Crow," of the same power—practically a sister ship. In due course the Bar of the Mersey, on which in 1889 there had been a depth at low water of spring tides of only about 11 feet, was improved to afford a depth of something like 30 feet under the same conditions, and a large amount of work had been done at shoal places in t'ne channels above the Bar. In view of the necessity of maintaining these channels un- impaired, and possibly of affording even greater depths in the future, as well as doing other dredging work in the river, two other dredgers followed, the "Coronation," of 3,500 tons capacity, in 1903, and a monster dredger in the shape of the "Leviathan," of 10,000 tons hopper capacity, in 1908. As was naturally to be expected from an engineer having carried out and maintained docks and harbour works on an immense scale the advice and assistance of Mr. Lyster was greatly sought after by those in all parts of the world who had problems of a somewhat similar character to face. Thus, in the matter of dredging, New York harbour, which in its earlier attempts had preceded Liverpool but without conspicuous success, eventually followed Liverpool's example, and decided to dredge by powerful suction dredgers of the "Brancker" and "G. B. Crow" type, and Mr. Lyster was consulted by a syndicate who eventually constructed large suction dredgers for that purpose on the lines of those vessels, and these were used in carrying out a large amount of dredging in the channels of the Bay of New York.

Similarly on the Thames and the Hooghli, dredgers designed by Mr. Lyster, and built under his supervision, were brought to work for the amelioration of the channels. The authorities in Port Elizabeth, Shanghai, Sekondi, on the Gold Coast, and other ports, not to mention various English rivers, Consulted him as to the design of river and harbour works, and in matters, such as dock walls and other works, his views were sought in many places. One of his last works at Liverpool was the construction of the Gladstone Graving Dock, completed after his retirement. On retiring from the Mersey Docks and Harbour Board, Mr. Lyster became a partner in the firm of Sir John Wolfe Barry, Lyster and partners.

Mr. Lyster was a Past President of the Institution of Civil Engineers, a colonel of the Railway Staff Corps, and a member of the Commission Consultative Internationale de Travaux du Canal Maritime de Suez. Liverpool University had the benefit of his advice and assistance as Associate Professor of Dock and Harbour Engineering, and conferred on him the degree of Master of Engineering. He had been a Vice-President of the Liverpool Engineering Society, and was one of the oldest members, having belonged to the Society since 7th June, 1876.