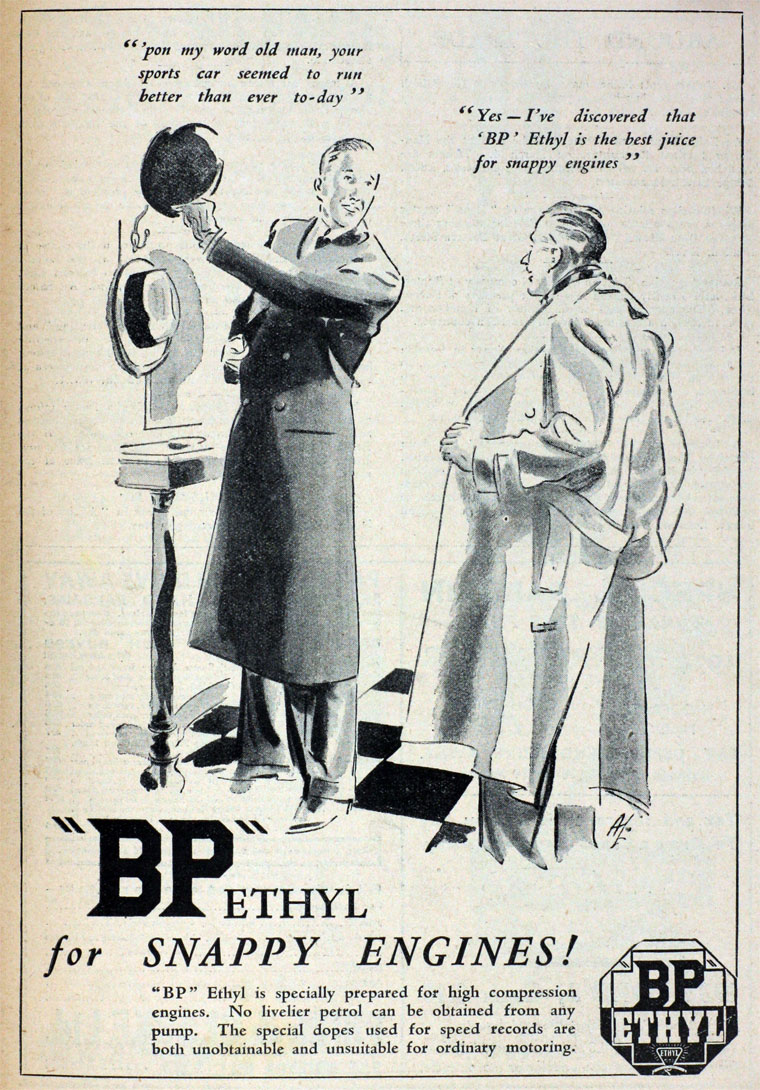 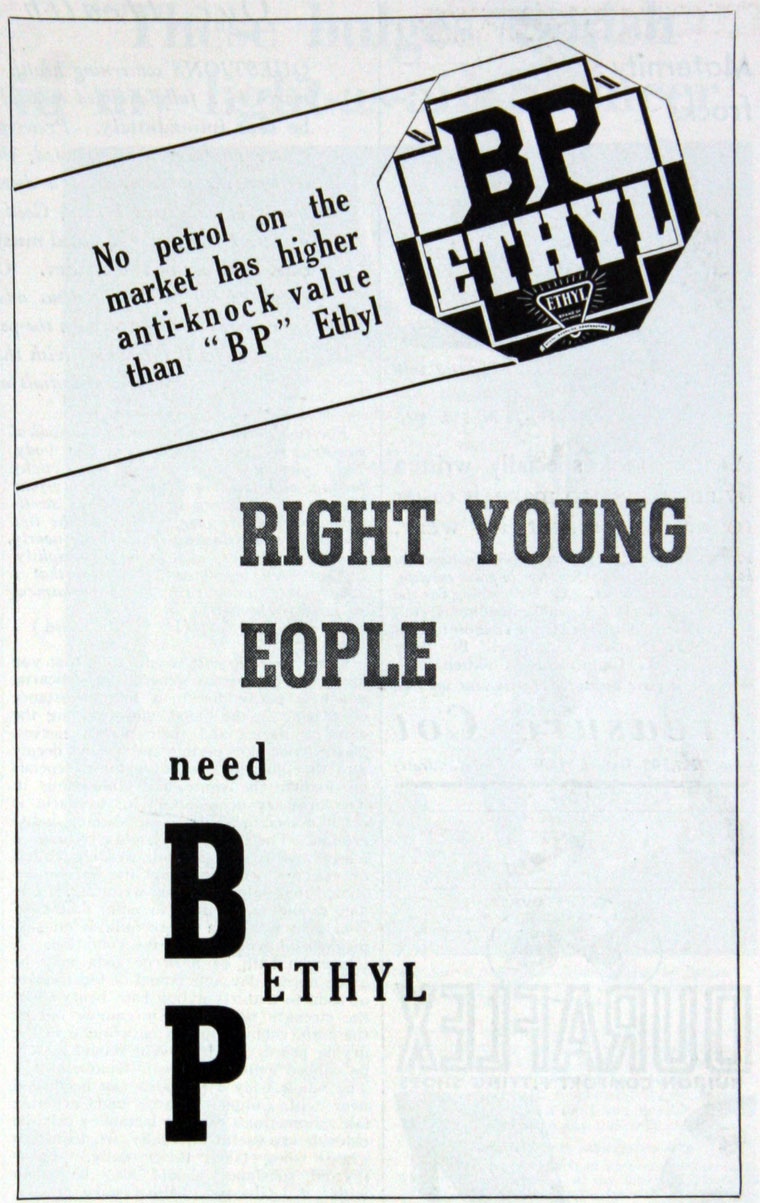 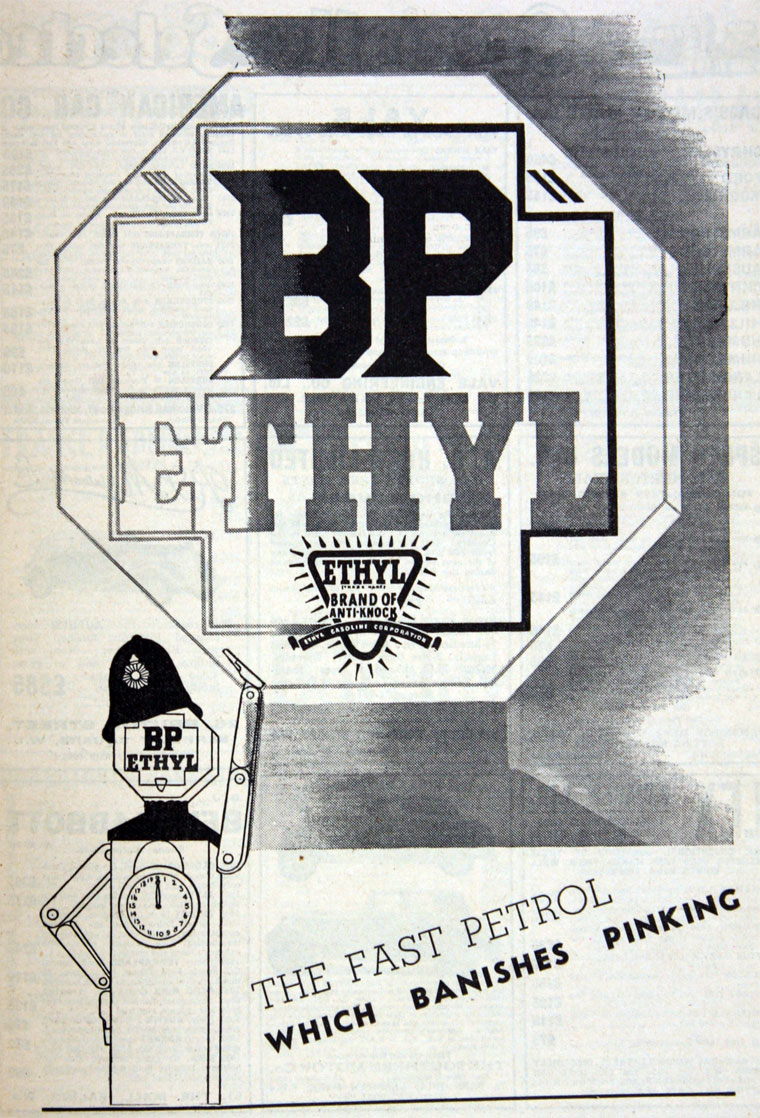 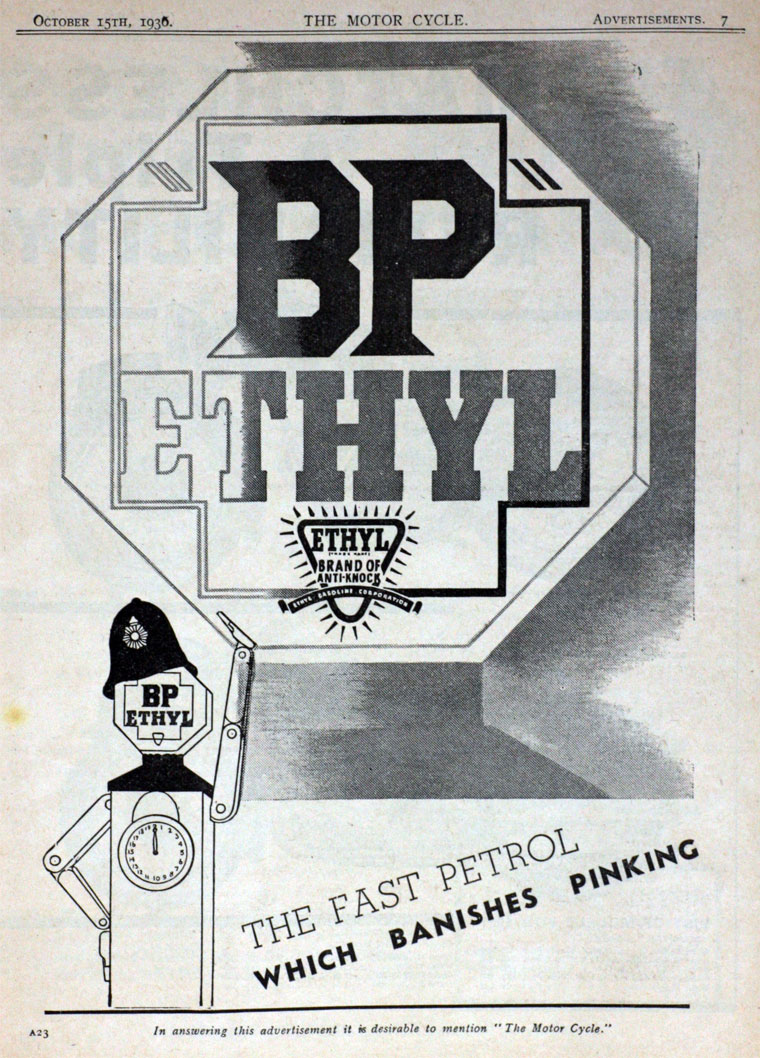 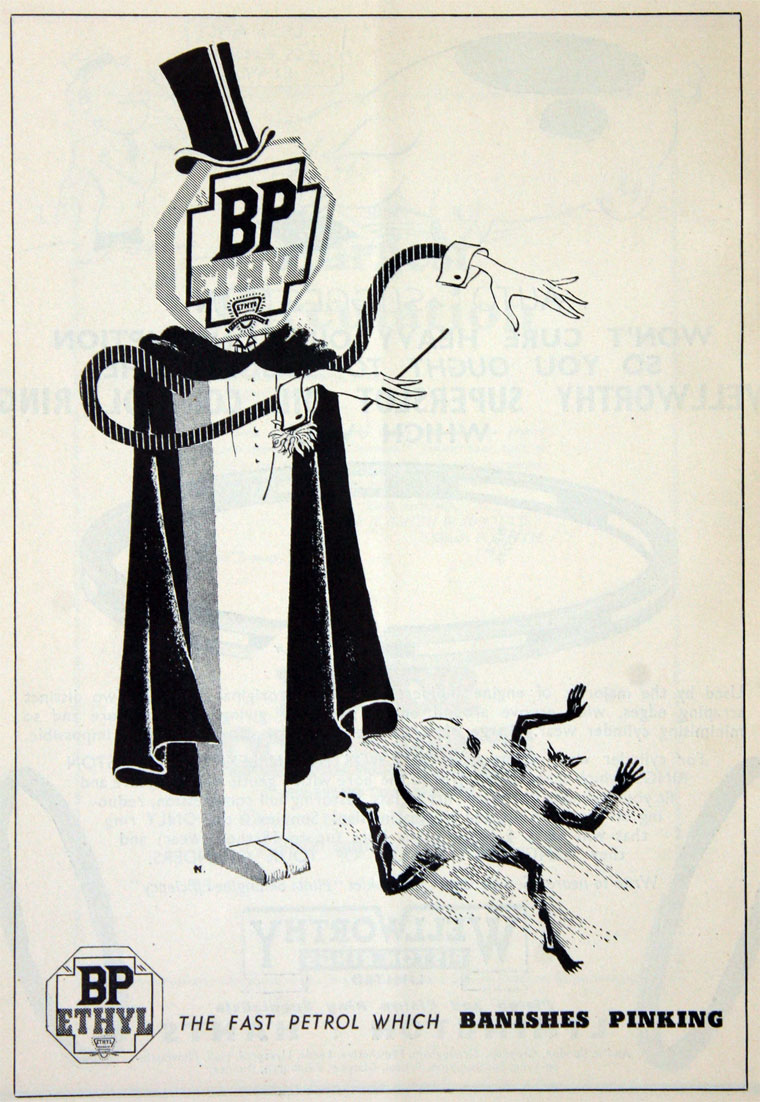 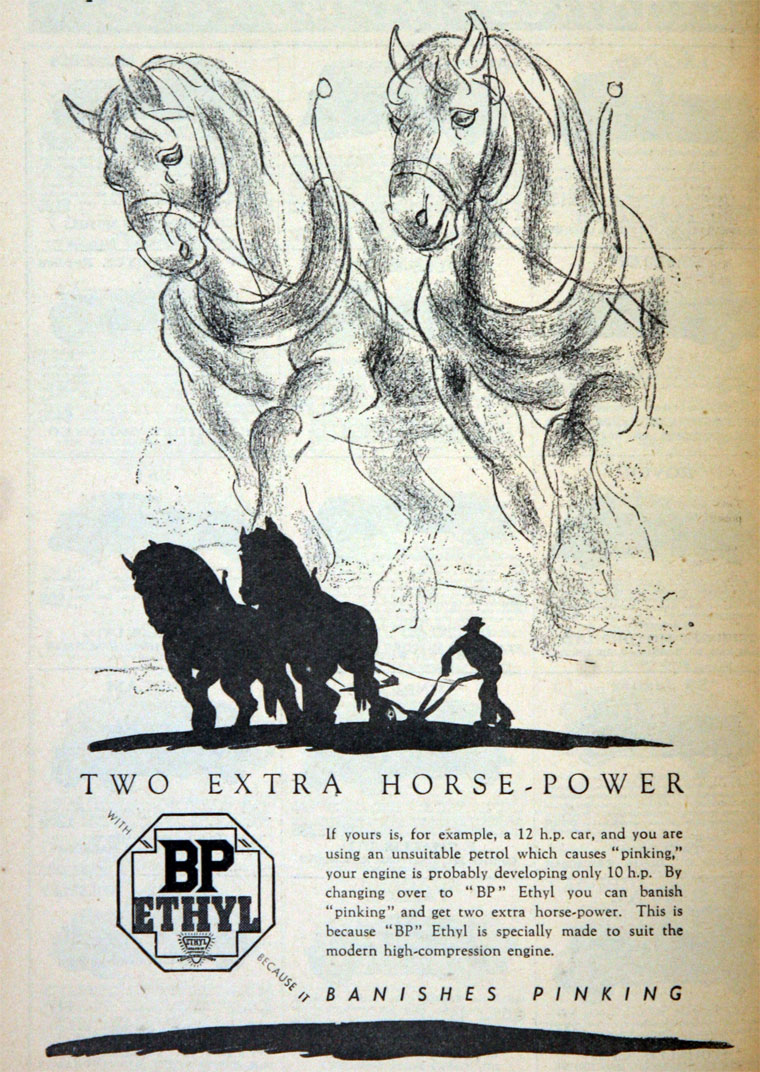 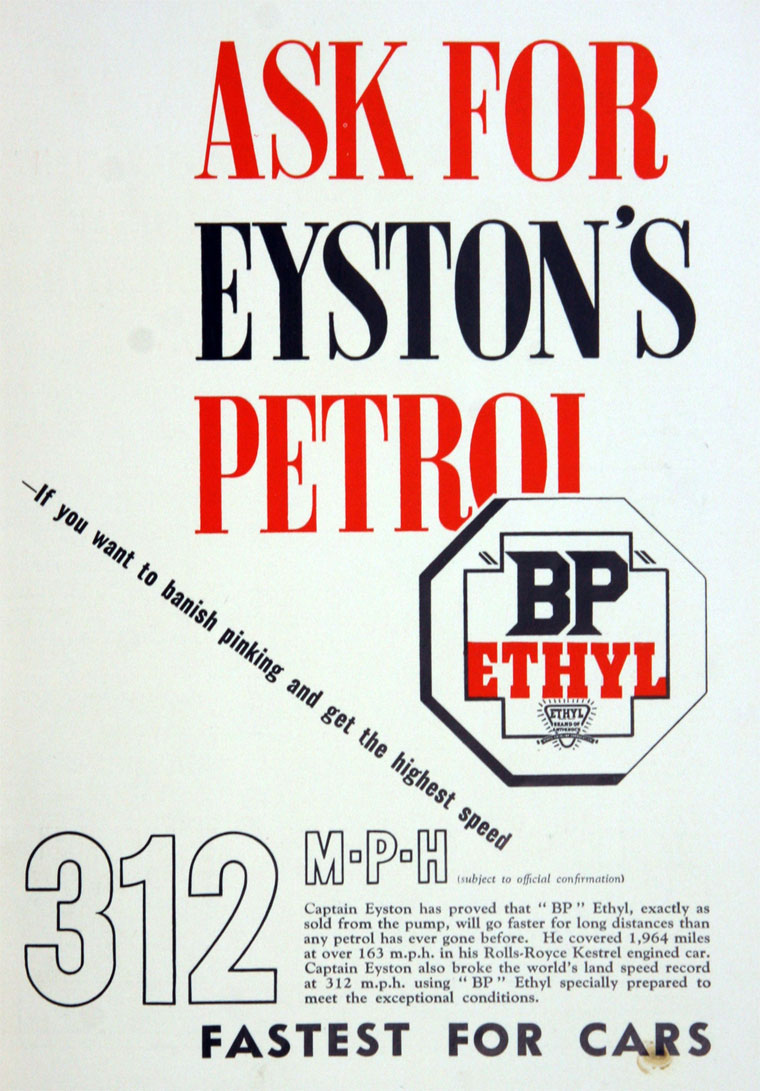 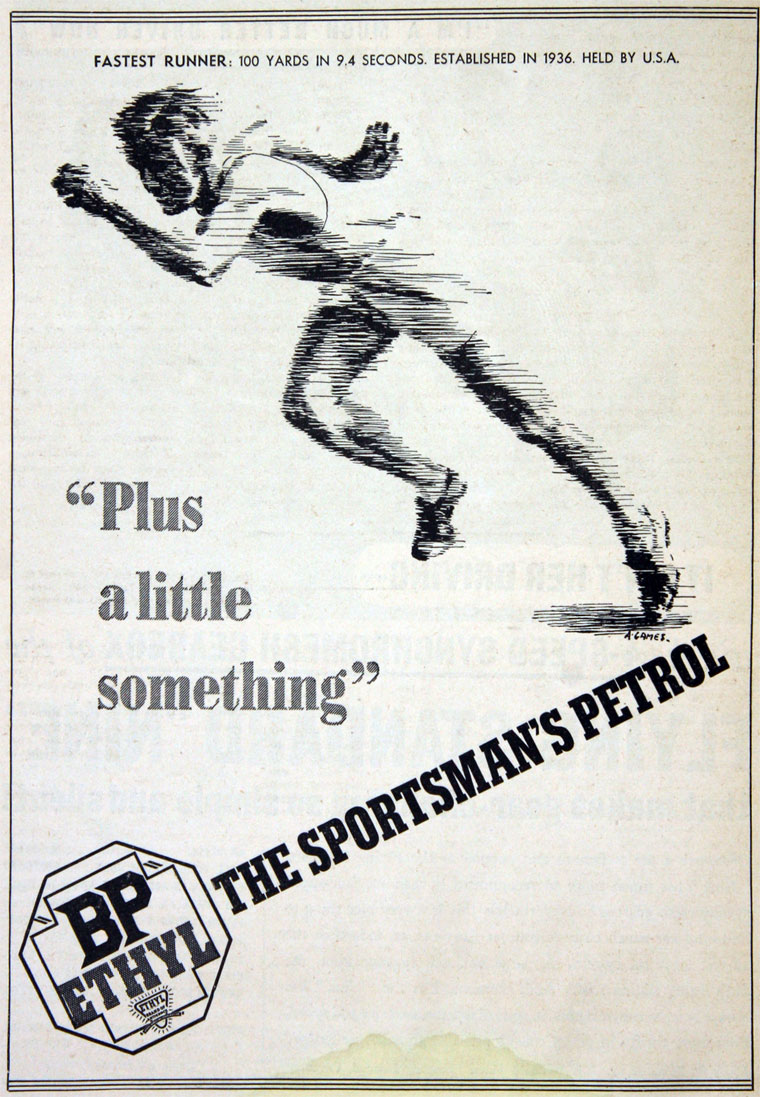 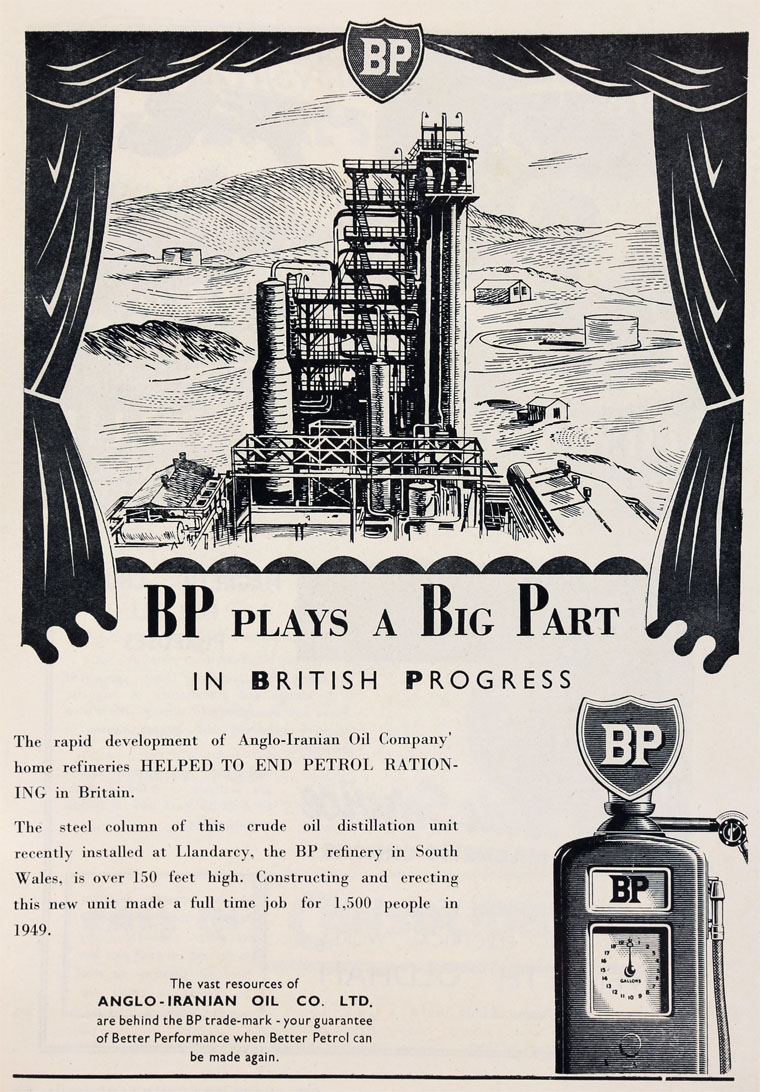 1935 Persia changed its name to Iran - in order to stay current the Anglo-Persian Oil Co followed suit, renaming itself Anglo-Iranian Oil Company. But the good times were short-lived.

1937 Manufacturers and suppliers in Great Britain. Producers and refiners of petroleum products. [1]

1938 Eric Fawcett, co-inventor of polyethylene, joined the company and was associated with the invention and development of a butane isomerisation process to produce isobutane, an intermediate required in the alkylation process for aviation gasoline[2].

1938 the principal suppliers of petrol in the UK, namely Anglo-American Oil Co, National Benzole Co, Shell-Mex and B. P. and Trinidad Leaseholds, joined together with Government approval to form the Petroleum Board to consider the problems of petroleum distribution in the event of war.

1939 On 3rd September, the Board's became an executive body under Government direction. All products were sold under a Pool description, the selling price of each product being subject to Government control.

WWII. Air power took on a new significance. The British Air Force turned to Anglo-Iranian, with its newly-improved aviation fuel’s efficiency. The quantity of fuel needed could only be made with a major refit at the Abadan refinery in Iran, but 3 ships carrying those supplies were sunk. The open seas were dangerous. During the war, 44 of the company’s tankers sank, killing 657 crew, with 260 others taken prisoner of war.

The British government asked Anglo-Iranian to find more oil on UK soil. The company increased production at a field in Nottingham. Quantities were still small, but were large enough to help. It was one of the best-kept secrets of World War II.

In Iran, the war years were equally fraught. Japan’s entry into the war made the refinery at Abadan a prime target. When Allied troops moved in to secure the facility, 3 employees died in friendly fire. A severe wheat shortage made life miserable for the 200,000 people living at Abadan and for the 80,000 more spread out in remote camps and villages at the oil fields. Anglo-Iranian sent a representative from London to help with the crisis. Tankers brought food rations from India and Australia. Second-hand clothes arrived from England. Smallpox and typhus swirled through the nearby countryside.

Post-WWII. As Europe rebuilt, so did Anglo-Iranian, investing in refineries in France, Germany and Italy plus new marketing efforts in Switzerland, Greece, Scandinavia and the Netherlands. BP gasoline went on sale for the first time in New Zealand.

1948 The Petroleum Board was dissolved in June.

1948 Anglo-Iranian started marketing Energol lubricating oil in various parts of Europe, followed by the UK the next year.

1951 Iran’s prime minister convinced his Parliament to nationalize oil operations within the country’s borders. Women and children were evacuated and the refinery was shut.

Governments around the world boycotted Iranian oil. Within 18 months, the Iranian economy was in ruins. Eventually a new arrangement was made, allowing a consortium of companies, including Standard Oil of Indiana (Amoco) and others, to run the oil operations in Iran. Anglo-Iranian’s stake was 40%.

1953 Opened Kent refinery on the Isle of Grain and another refinery in Belfast[3].

1954 the company’s name was changed to the British Petroleum Company.