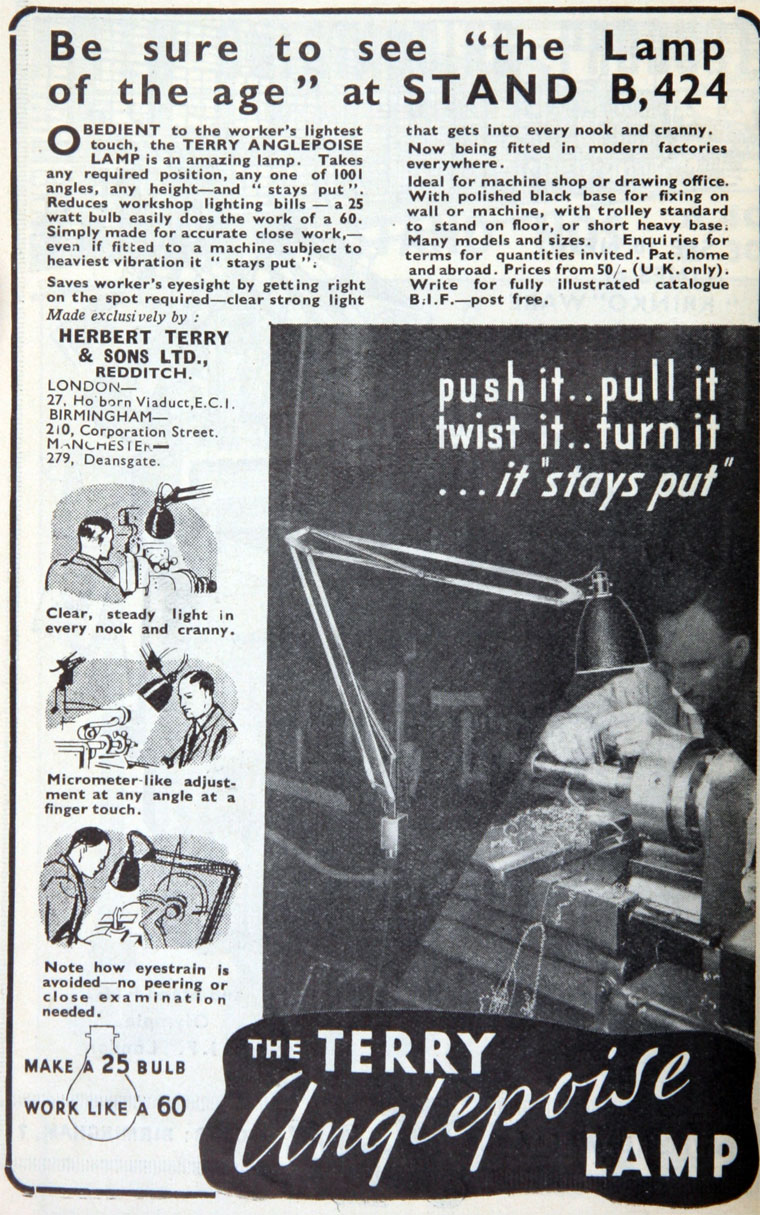 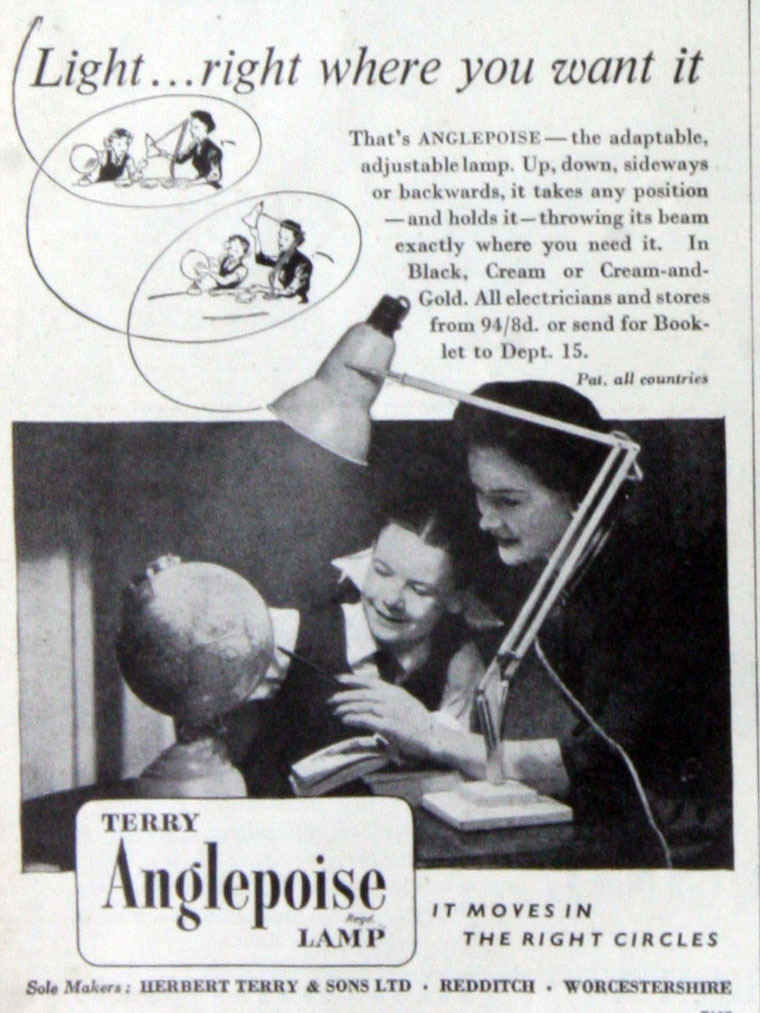 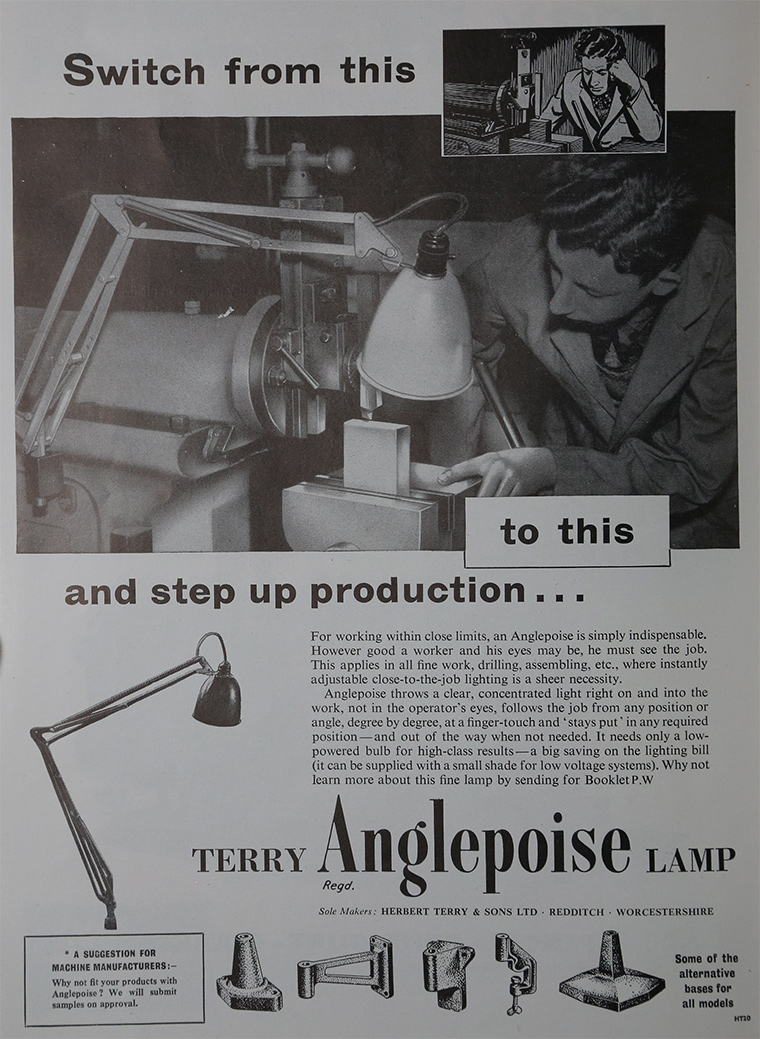 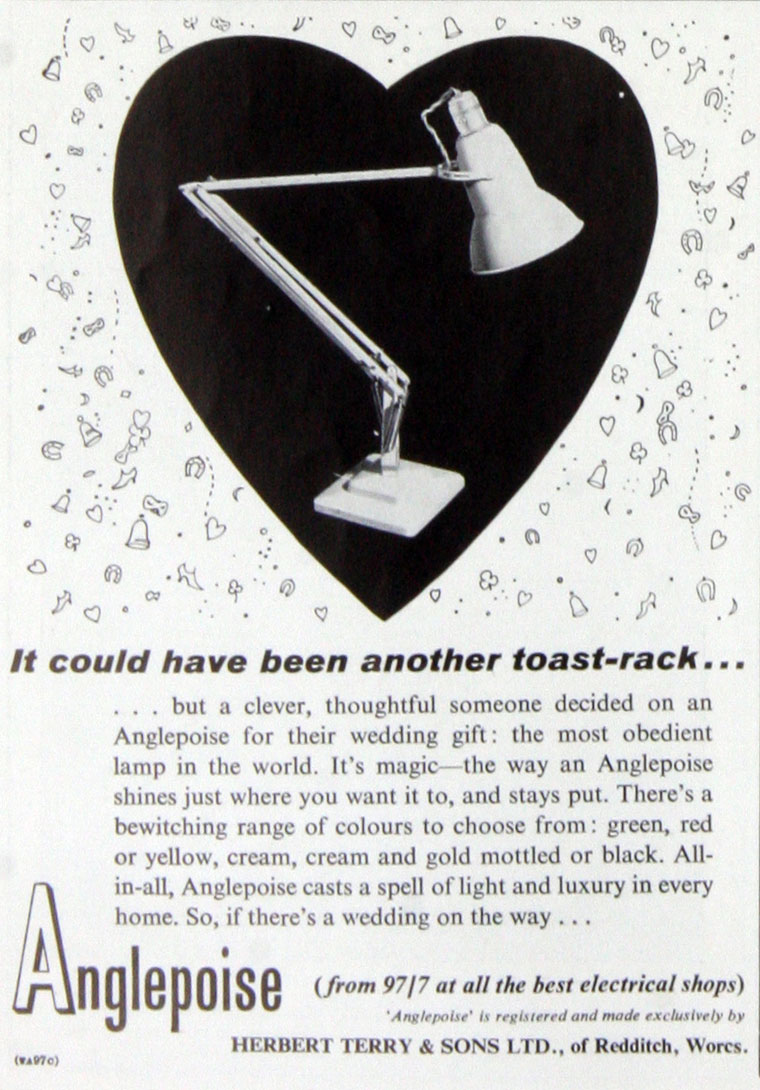 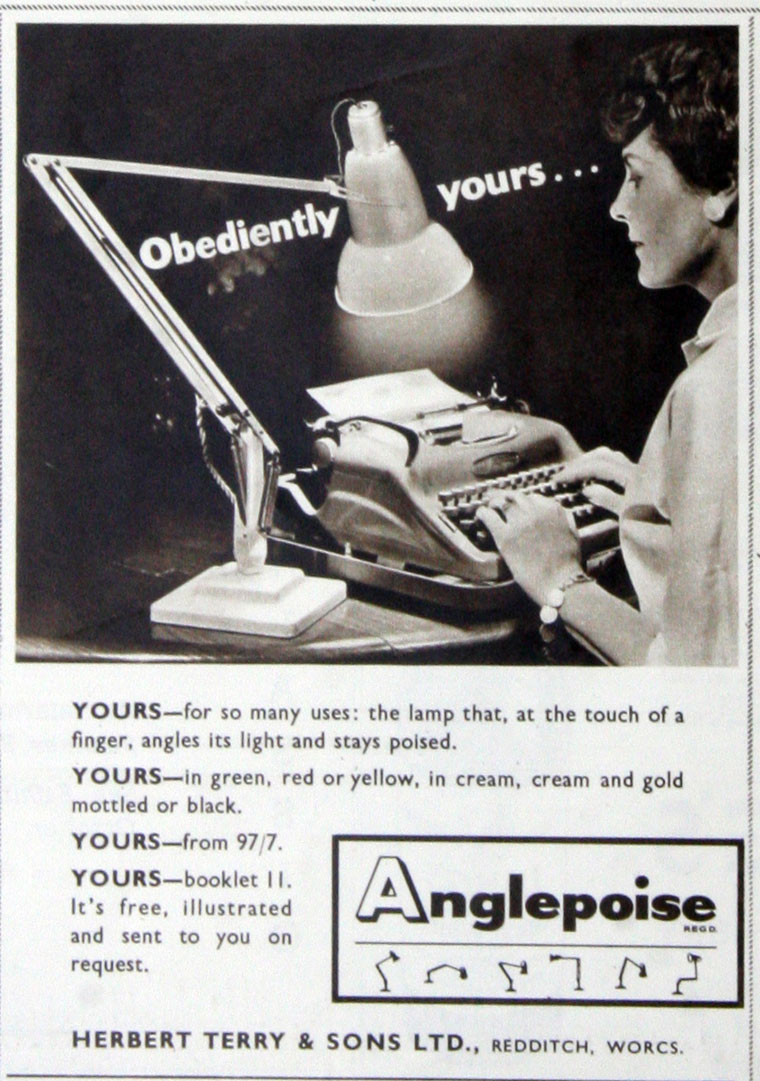 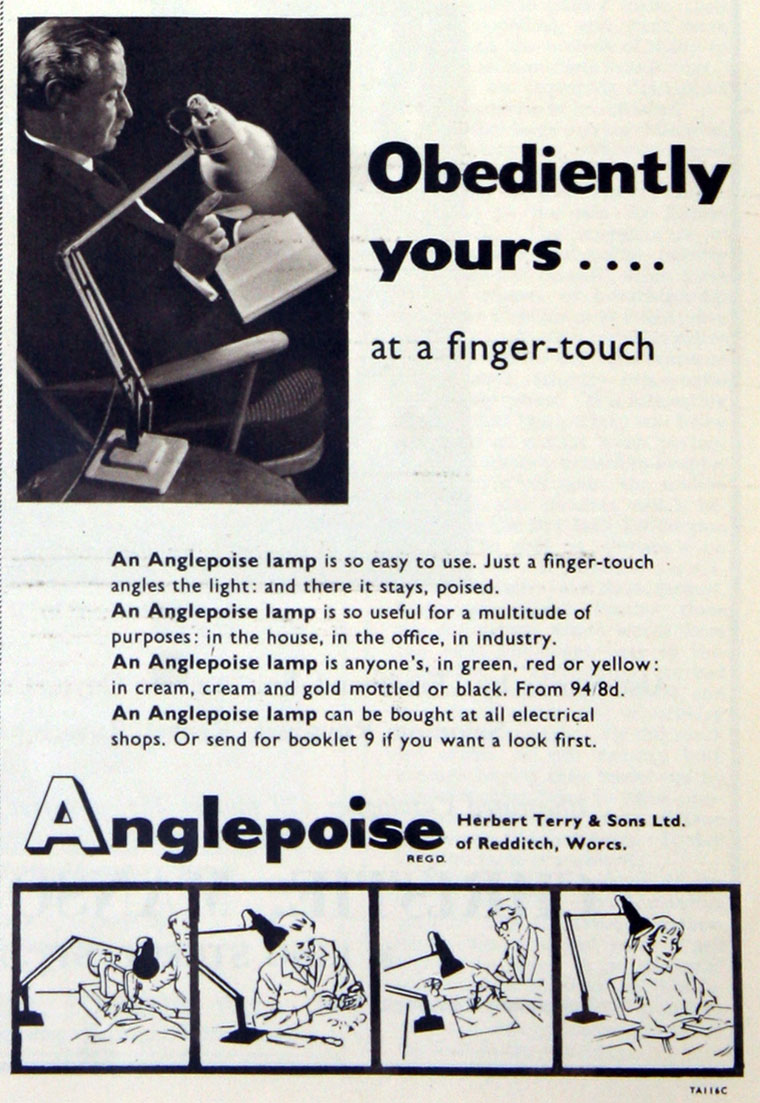 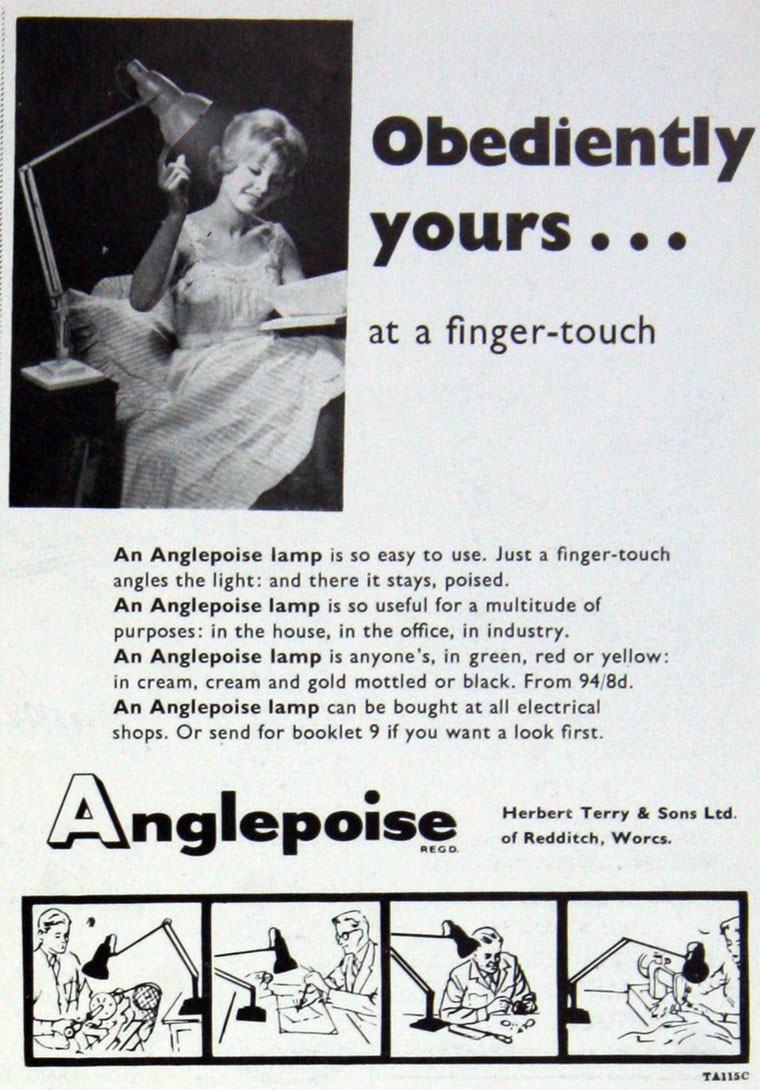 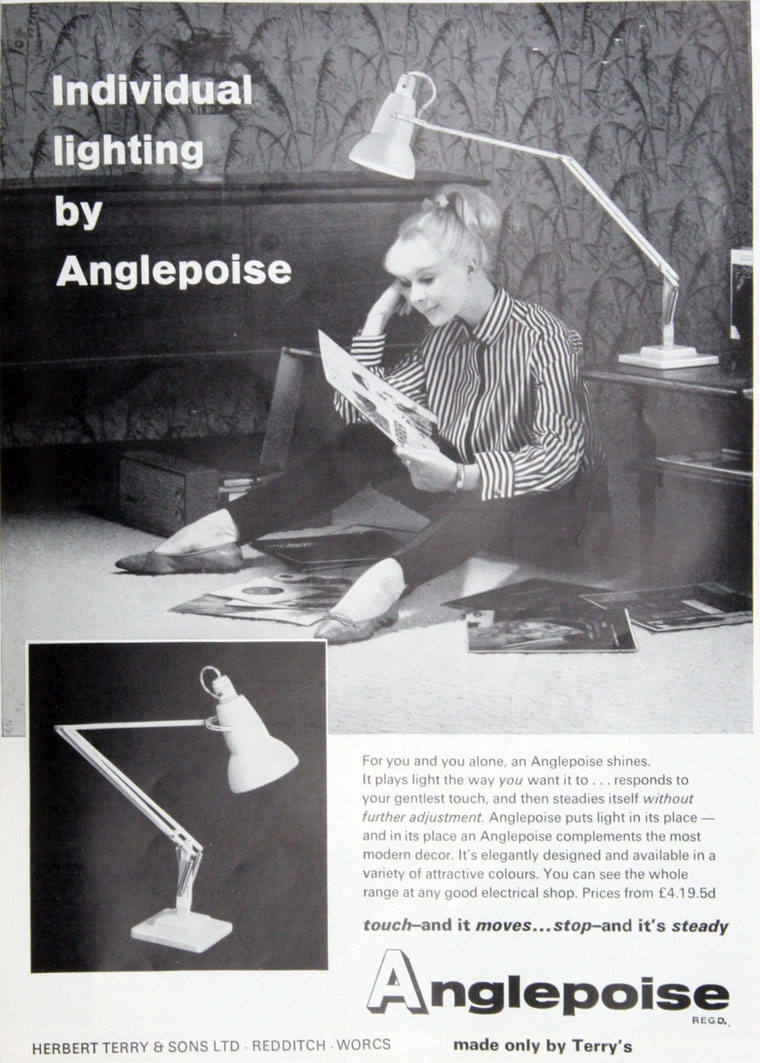 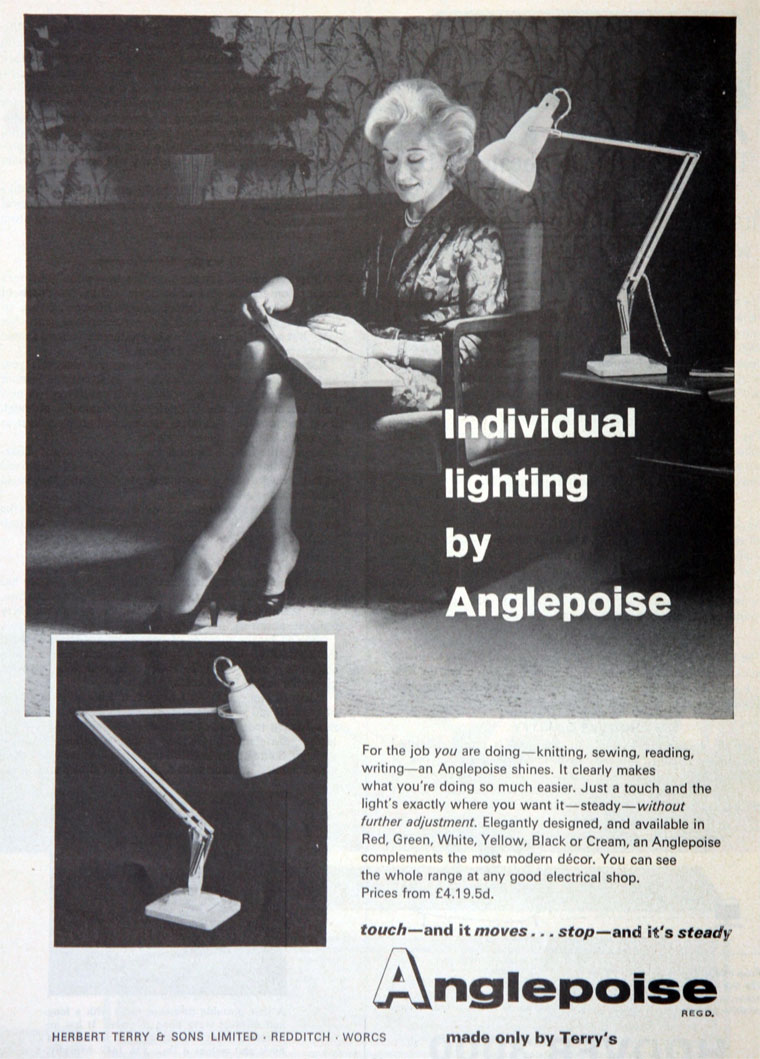 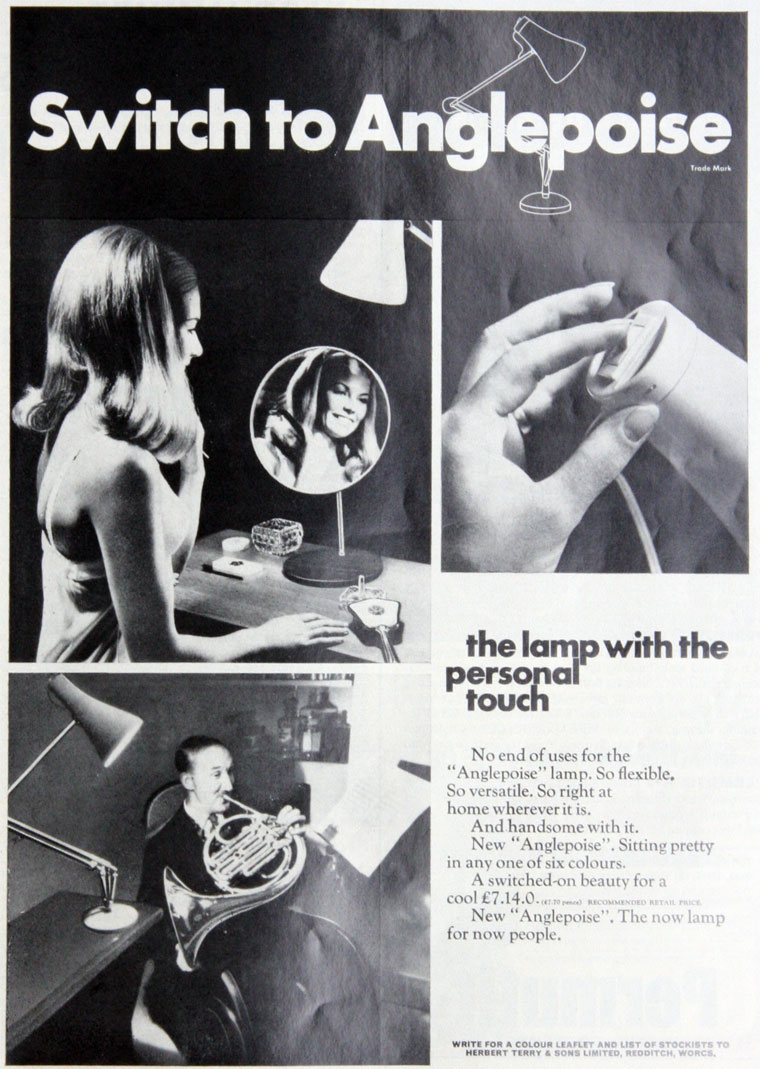 1931 George Carwardine developed an idea for using springs, cranks, and levers to balance weights. Experimenting with his concept, and using springs developed by Terry’s, he eventually managed to create a durable lamp which could be moved into a number of positions – making it ideal for engineers.

1932 Cardwardine attempted to patent his design under the name ‘Equipoise’ but this was rejected as the name already existed. Consequently, it was changed to Anglepoise. That same year, manufacture of Anglepoise lamps began.

1933 The first Anglepoise four-spring lamp (Model 1208) was launched and Cardwardine licensed the Anglepoise design to Terry’s.

1935 Anglepoise was redesigned for domestic use. Although Model 1208 was a great design, it was largely regarded as being “too industrial” for home use. Consequently, a three-spring lamp was designed by Cardwardine and Terry’s designers. This version was the Model 1227 and it is this design which is largely regarded as the quintessential Anglepoise.

1939 World War 2 changes the Anglepoise strategy. Throughout the years, Terry’s had been running multiple advertising campaigns, highlighting the benefits of the Anglepoise design. On the day that war was announced, the Telegraph ran an advert which stated the Model 1227 was the “ideal blackout lamp”.

1939 The 1944 Anglepoise is reworked for the military. Like most manufacturers during this time, Anglepoise turned its attentions to the war effort. As the lamps were suitable for navigators, the company’s lamps were soon produced for bombers.

1969 The Model 75 is produced. This Anglepoise design was different from the others as it included features such as a rounded base instead of the standard square shape.

1986 Around four decades since the close of World War 2, a downed Wellington bomber was salvaged from Loch Ness in Scotland. Despite being submerged in the murky waters, the Anglepoise lamp was still intact. After being given a new battery, it still functioned. Today, the bomber can be seen at the Brooklands Museum in Surrey.

2003 Sir Kenneth Grange becomes the Design Director of Anglepoise. Responsible for such concepts as the Kenwood Mixer, the Intercity 125 train, and the modern London Taxi, he launches a new Anglepoise design, the Type3 desk lamp, that year.

2005 Anglepoise produces giant versions of the Model 1227. Story Centre and the Roald Dahl Museum requested that Anglepoise produce a giant version of the 1227 – the same design which was used by Roald Dahl himself. Although the company produced three prototypes, it was moved into mass production because it generated so much interest. These versions of the 1227 are three times the size of the original.

2009 Anglepoise celebrates its 75th anniversary. To commemorate the occasion, the lamp is featured on its own Royal Mail stamp. Other designs were also honoured, such as the Mini, the map of the London Underground, and the K2 Telephone Kiosk.

2014 Anglepoise teams up with Paul Smith to produce the Type 75. A famous designer known for his “mastery of colour”, this design contains his unique flair.