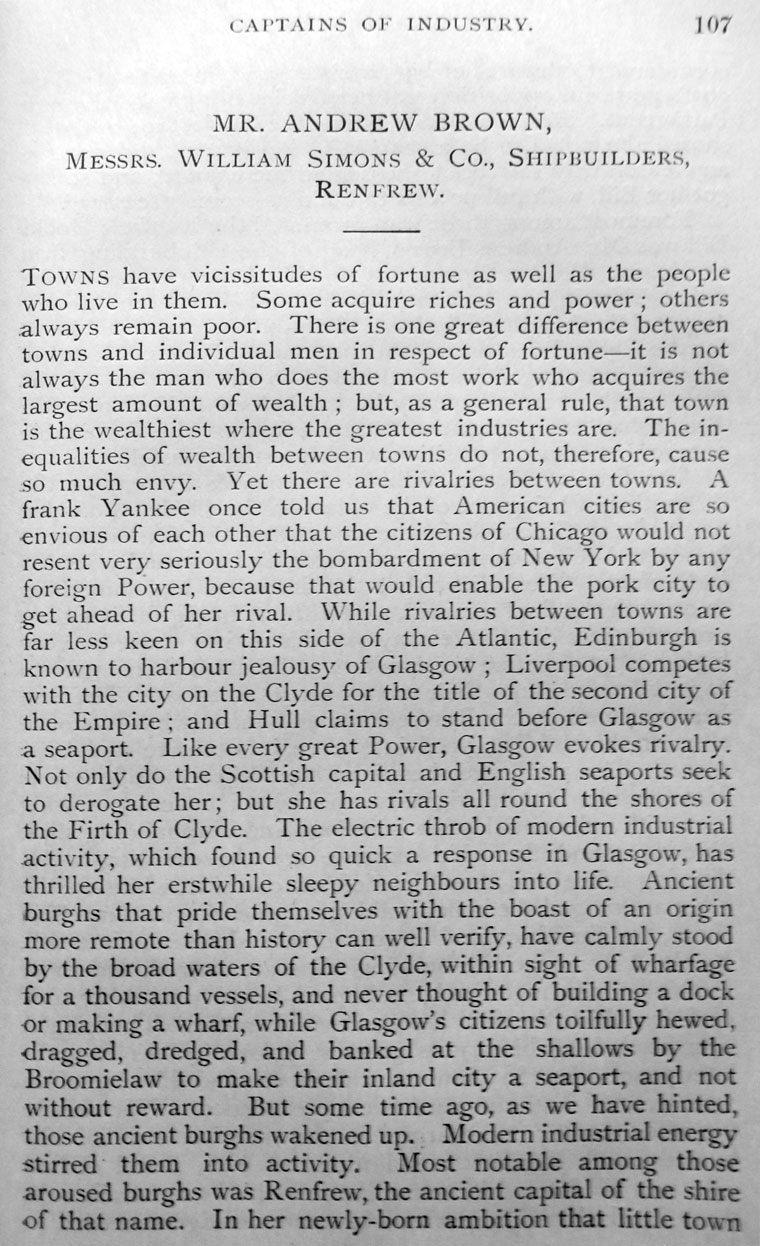 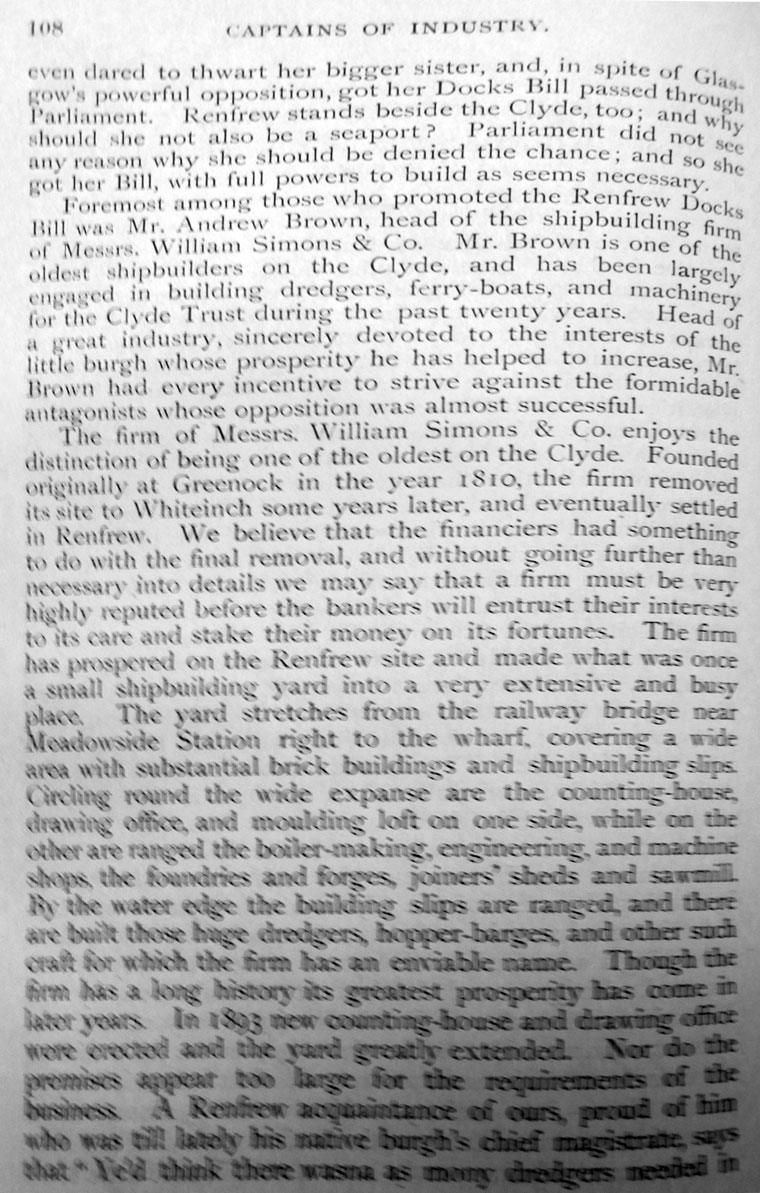 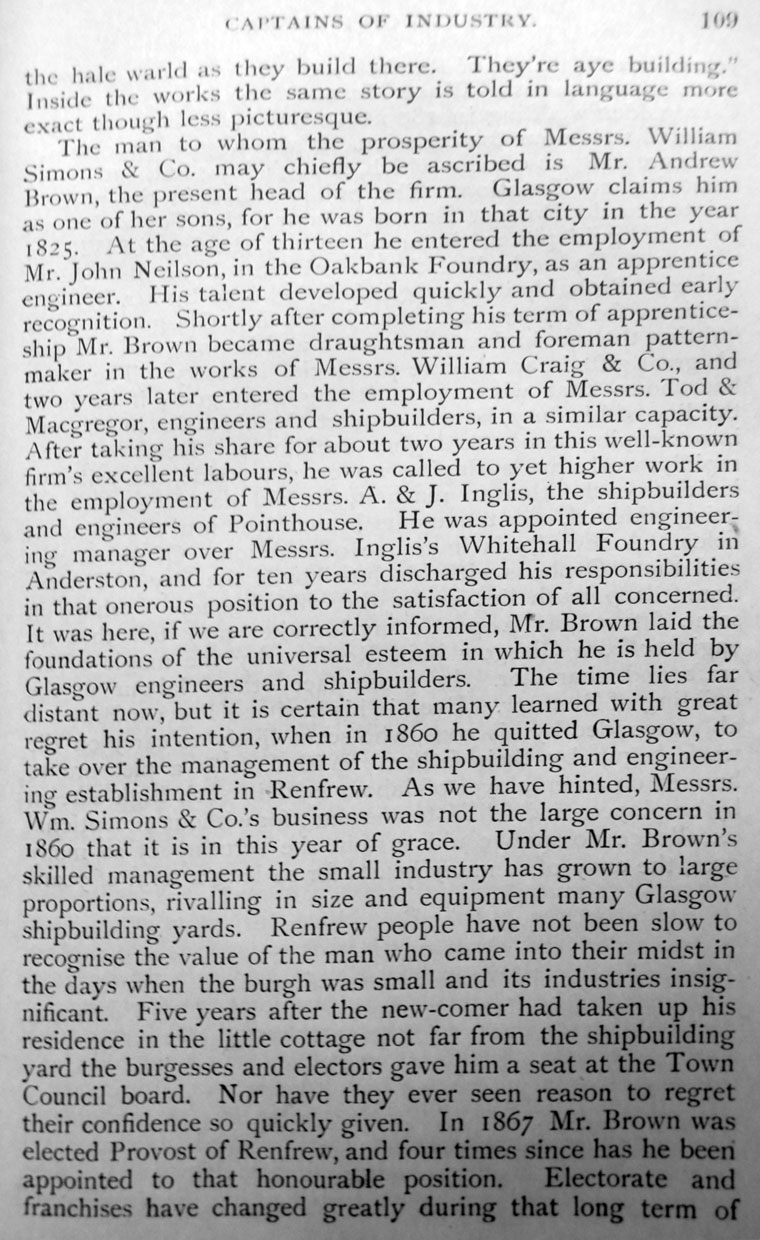 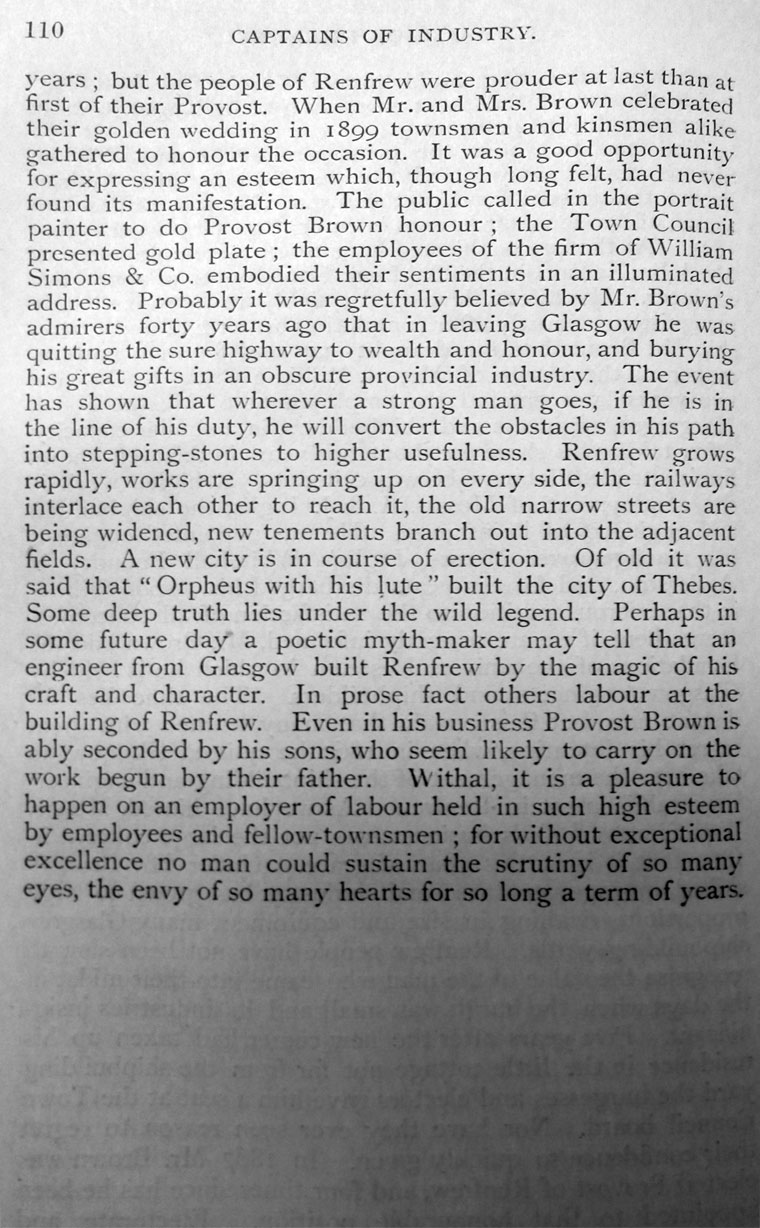 Note: This is a sub-section of Andrew Brown

TOWNS have vicissitudes of fortune as well as the people who live in them. Some acquire riches and power; others always remain poor. There is one great difference between towns and individual men in respect of fortune—it is not always the man who does the most work who acquires the largest amount of wealth; but, as a general rule, that town is the wealthiest where the greatest industries are. The inequalities of wealth between towns do not, therefore, cause so Touch envy. Vet there are rivalries between towns. A frank Yankee once told us that American cities are so envious of each other that the citizens of Chicago would not resent very seriously the bombardment of New York by any foreign Power, because that would enable the pork city to get ahead of her rival. While rivalries between towns are far less keen on this side of the Atlantic, Edinburgh is known to harbour jealousy of Glasgow; Liverpool competes with the city on the Clyde for the title of the second city of the Empire; and Hull claims to stand before Glasgow as a seaport. Like every great Power, Glasgow evokes rivalry. Not only do the Scottish capital and English seaports seek to derogate her; but she has rivals all round the shores of the Firth of Clyde. The electric throb of modern industrial activity, which found so quick a response in Glasgow, has thrilled her erstwhile sleepy neighbours into life. Ancient burghs that pride themselves with the boast of an origin more remote than history can well verify, have calmly stood by the broad waters of the Clyde, within sight of wharfage for a thousand vessels, and never thought of building a dock or making a wharf, while Glasgow's citizens toilfully hewed. dragged, dredged, and banked at the shallows by the Broomielaw to make their inland city a seaport, and not without reward. But some time ago, as we have hinted, those ancient burghs wakened up. Modern industrial energy- stirred them into activity. Most notable among those aroused burghs was Renfrew, the ancient capital of the shire of that name. In her newly-born ambition that little town . . . . . . . . . .

The man to whom the prosperity of Messrs. William Simons & Co. may chiefly be ascribed is Mr. Andrew Brown, the present head of the firm. Glasgow claims him as one of her sons, for he was born in that city in the year 1825. At the age of thirteen he entered the employment of Mr. John Neilson, in the Oakbank Foundry, as an apprentice engineer. His talent developed quickly and obtained early recognition.

Shortly after completing his term of apprenticeship Mr. Brown became draughtsman and foreman pattern-maker in the works of Messrs. William Craig & Co., and two years later entered the employment of Messrs. Tod & Macgregor, engineers and shipbuilders, in a similar capacity. After taking his share for about two years in this well-known firm's excellent labours, he was called to yet higher work in the employment of Messrs. A. & J. Inglis, the shipbuilders and engineers of Pointhouse.

He was appointed engineering manager over Messrs. Inglis's Whitehall Foundry in Anderston, and for ten years discharged his responsibilities in that onerous position to the satisfaction of all concerned. It was here, if we are correctly informed, Mr. Brown laid the foundations of the universal esteem in which he is held by Glasgow engineers and shipbuilders. The time lies far distant now, but it is certain that many learned with great regret his intention, when in 1860 he quitted Glasgow, to take over the management of the shipbuilding and engineering establishment in Renfrew.

As we have hinted, Messrs. Wm. Simons & Co.'s business was not the large concern in 1860 that it is in this year of grace. Under Mr. Brown's skilled management the small industry' has grown to large proportions, rivalling in size and equipment many Glasgow shipbuilding yards. Renfrew people have not been slow to recognise the value of the man who came into their midst in the days when the burgh was small and its industries insignificant. Five years after the new-comer had taken up his residence in the little cottage not far from the shipbuilding yard the burgesses and electors gave him a seat at the Town Council board. Nor have they ever seen reason to regret their confidence so quickly given.

In 1867 Mr. Brown was elected Provost of Renfrew, and four times since has he been appointed to that honourable position. Electorate and franchises have changed greatly during that long term of years; but the people of Renfrew were prouder at last than at first of their Provost. When Mr. and Mrs. Brown celebrated their golden wedding in 1899 townsmen and kinsmen alike gathered to honour the occasion. It was a good opportunity for expressing an esteem which, though long felt, had never found its manifestation. The public called in the portrait painter to do Provost Brown honour; the Town Council presented gold plate; the employees of the firm of William Simons & Co. embodied their sentiments in an illuminated address. Probably it was regretfully believed by Mr. Brown's admirers forty years ago that in leaving Glasgow he was quitting the sure highway to wealth and honour, and burying his great gifts in an obscure provincial industry. The event has shown that wherever a strong man goes, if he is in the line of his duty, he will convert the obstacles in his path into stepping-stones to higher usefulness.

Renfrew grows rapidly, works are springing up on every side, the railways interlace each other to reach it, the old narrow streets are being widened, new tenements branch out into the adjacent fields. A new city is in course of erection. Of old it was said that "Orpheus with his lute" built the city of Thebes. Some deep truth lies under the wild legend. Perhaps in some future day a poetic myth-maker may tell that an engineer from Glasgow built Renfrew by the magic of his craft and character. In prose fact others labour at the building of Renfrew. Even in his business Provost Brown is ably seconded by his sons, who seem likely to carry on the work begun by their father. Withal, it is a pleasure to happen on an employer of labour held in such high esteem by employees and fellow-townsmen; for without exceptional excellence no man could sustain the scrutiny of so many eyes, the envy of so many hearts for so long a term of years.