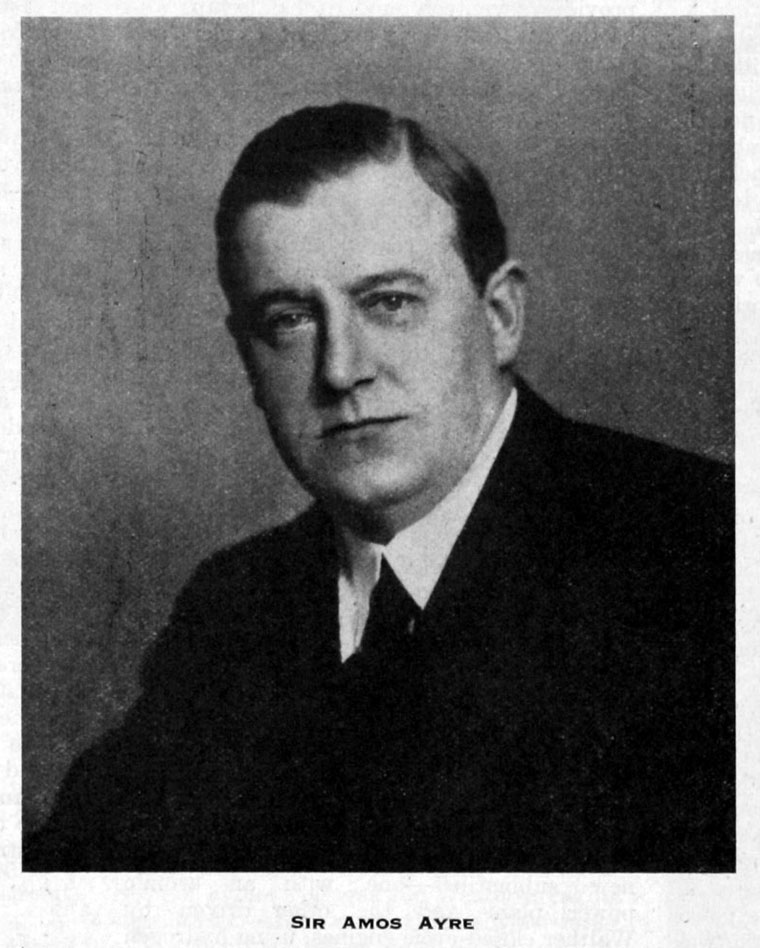 All those engaged in shipbuilding will have learned with regret of the death of Sir Amos Ayre, the chairman of the Shipbuilding Conference, which occurred at his home in London on Sunday last, January 13th, at the age of sixty-six.

Sir Amos, who was actively engaged in shipbuilding all his life, was born at South Shields in 1885 and gained his early knowledge of ships at the yard of Wood, Skinner and Co., Ltd., where he served his apprenticeship.

His technical knowledge was acquired at Armstrong College (now King's College), Newcastle upon Tyne, where he graduated in 1904, receiving the King's Prize and an Honours Medal in the following year.

He extended his experience by working in other yards in Ireland, Scotland and England.

Sir Amos first entered public service in the first world war, when, at the request of the Admiralty, he acted as Supervisor of Fleet Coaling in the Firth of Forth, a post which he relinquished after two years to become the District Director of Shipbuilding (Scotland). His wartime services were recognised by the a ward of the O.B.E. in 1918, and in that year, in association with his brother Wilfrid, he launched the Burntisland Shipbuilding Company, Ltd., a company which is numbered among the foremost shipbuilding firms in the country. The measure of success achieved by the new firm reflected the technical knowledge, courage, organising skill, and administrative ability of Amos Ayre and his brother.

In addition to his shipbuilding activities, Amos Ayre found time to serve on various official bodies and represented this country on the international shipbuilding statistics committee of the League of Nations, of which he was appointed chairman, and, in 1929, he was a delegate to the International Conference on Safety of Life at Sea.

During the years between the two world wars Sir Amos had much to do with the stabilising of British shipbuilding, which suffered heavily from cyclic depressions. He became vice-president of the Shipbuilding Employers' Federation, and following three years' work in that capacity he was elected president in 1930-31, just when the industry was at its lowest ebb. His efforts during this period and the administrative ability displayed were recognised when he was appointed permanent chairman of the Shipbuilding Conference, a body which was formed in 1936 to co-ordinate the commercial activities and economic affairs of all the shipbuilding interests in the United Kingdom. This new appointment meant the giving up of practical shipbuilding to take over the formulation and handling of policy, and Sir Amos was able to complete the industry's rationalisation scheme, which had been under way for several years.

On ceasing to be actively engaged in shipbuilding Sir Amos resigned as chairman of the Burntisland Shipbuilding Company, Ltd., and so severed a partnership, unbroken since 1918, with his brother, Sir Wilfrid, who succeeded him.

Several Government committees had t.he benefit of Sir Amos Ayre's advice. He served on the Falmouth Committee of the Imperial Defence Committee, which considered the possibilities of extracting oil from coal. He was knighted in 1937 and at the outbreak of the second world war he became Director of Shipbuilding and Repairs for the Ministry of Shipping. When this department became the responsibility of the Admiralty, Sir Amos continued to serve as Director, with Sir James Lithgow as Controller, and was concerned with the conception of the national programme of standard shipbuilding, which was to play such an important role in the war strategy by setting up shipyards in America and utilising the vast production potential of the United States to build ships for this country. In 1941, Sir Amos became Deputy Controller and Director of Shipbuilding, while Sir Lawrie Edwards took over the Directorship of Repairs. He continued in this post until the end of 1944, when he returned to the chairmanship of the Shipbuilding Conference, to utilise, once again, his powers of organisation and of planning to help the shipbuilding industry through the post-war period, a task which demanded wise and skilful direction during the transition from warship building to merchant ship construction.

In recognition of his war services Sir Amos was made a K.B.E. in 1943 and the University of Durham conferred on him the honorary degree of D.So.

Technical developments, particularly with regard to hull form, resistance and propellers were of considerable interest to Sir Amos, and he contributed many papers upon these and allied subjects to the Transactions of the technical societies. His papers read before the North-East Coast Institution of Engineers and Shipbuilders, of which he was elected a Fellow in 1942, gave an approximate method for estimating e.h.p., which is still used in many shipyards, while his 1947 Watt Anniversary Lecture revealed him to be an authority on the statistics of the shipbuilding industry.

He was elected a member of council of the Institution of Naval Architects in 1929 and ·made a vice-president in 1938. He delivered several papers before the members of that institution. Immediately after the war, he gave a paper to the Institution of Naval Architects entitled "Merchant Shipbuilding During the War," and in 1946, in association with Mr. G. M. Boyd, presented some account of the work of . the Admiralty Ship Welding Committee. Although Sir Amos had been engaged on the statistical and economic side of the industry for many years, he always kept himself informed concerning scientific improvements and demonstrated his continued interest in the technical aspect of shipbuilding when he gave a paper entitled "Some Observations Concerning Resistance and Propulsion" at the Institution's spring meetings last year.

From 1946 to 1948 Sir Amos was president of the Institute of Marine Engineers, and in his presidential address discussed the present and future of marine engineering. When the British Shipbuilding Research Association was formed in 1944 Sir Amos became a member of the council and found time to serve actively on as many as nine sub-committees and panels of the research board ; in addition, he maintained his interest in propulsion problems as a member of the Froude Ship Research Sub-Committee of the N.P.L. In 1946-47 he was Prime Warden of the Worshipful Company of Shipwrights.

Sir Amos Ayre was the complete shipbuilder, combining, as he did, full technical knowledge with wide practical experience, and with a command of the realms of economics and commerce. By his death the shipbuilding industry has lost an outstanding naval architect, an able administrator and organiser, and an authority on shipbuilding statistics.