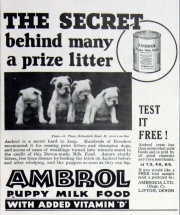 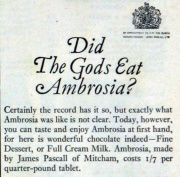 Ambrosia is a well known brand in the United Kingdom. Its original product was a dried milk powder for infants, but it is most famous for its custard and rice pudding. The brand plays on the fact that it is made in Devon (at a factory in Lifton), with well known strapline "Devon knows how they make it so creamy".

1917 The Ambrosia creamery was founded by Albert Morris, in his home town of Lifton, on the Devon-Cornwall border, to make a rich food for infants. He took milk from local farms, where most of the cows were the Red Ruby breed, and dried it with roller dryers.

The product soon came to the attention of the British military, who took significant quantities for its soldiers, still fighting the first world war.

Pre-WWII. Virol became associated with Ambrosia to produce Virol and Milk in direct rivalry with Horlicks.

Just prior to the second world war, the Ambrosia creamery was the first company to start making creamed rice pudding ready in a tin. Following the outbreak of war the vast majority of production was placed in Red Cross food parcels.

After the cessation of hostilities Ambrosia relaunched the product, along with a creamed macaroni pudding.

1957 Following increasing demand, the creamery opened a new factory near to the original production facility.

1990 The entire company was acquired by Colman's ltd, a famous brand of mustard.

2001 This is turn was bought out by Unilever.

2004 Unilever sold the brand on to Premier Foods, where it is still a core brand, alongside others such as Bisto, Branston and Hovis.