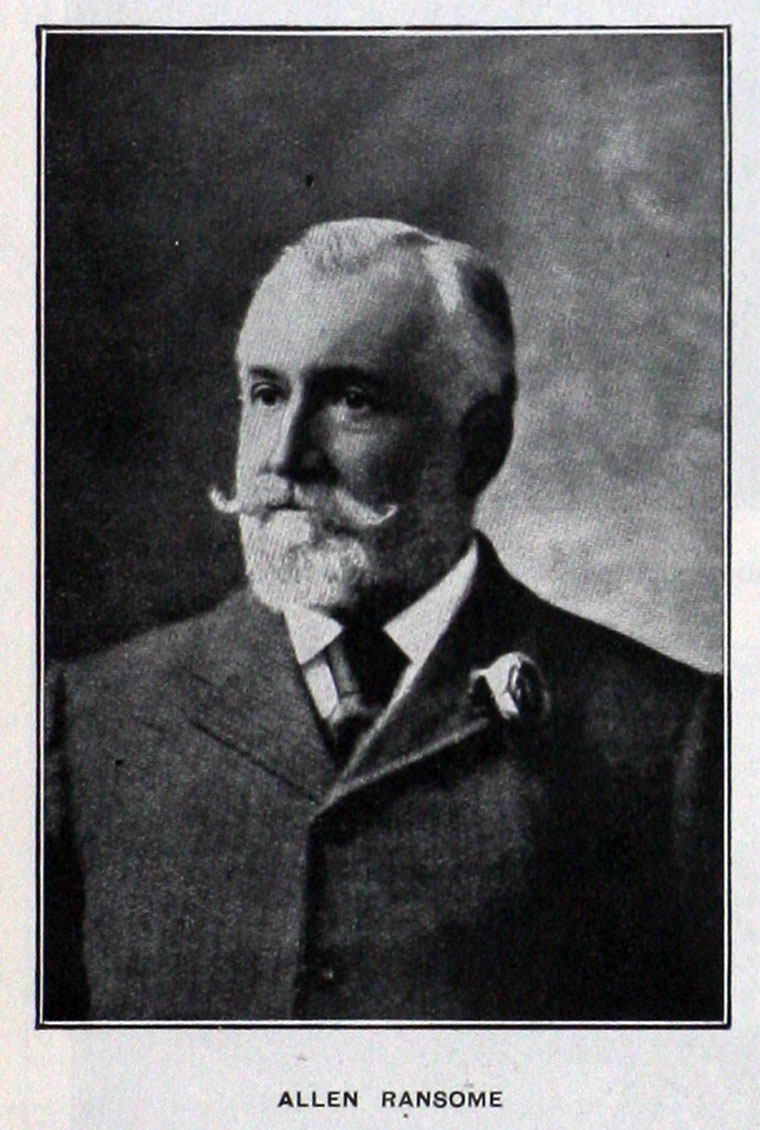 1833 Born at Rushmere, Suffolk the son of James Allen Ransome and his wife Katherine

1891 Executor of his brother, Robert James Ransome's will; described as sawmill engineer.

ALLEN RANSOME was born at Yoxford, Suffolk, on 15th January 1833.

He was the second son of the late Mr. James Allen Ransome, who for many years was senior partner in the firm of Messrs. Ransomes, Sims, and Jefferies (then Ransomes and May), Orwell Works, Ipswich.

At the age of sixteen he began an apprenticeship in his father's works, where he acquired a thorough knowledge of the business.

At the age of twenty he became manager of the field implement department of the Orwell Works, which, at that time, employed 300 workmen in this branch alone.

In 1855 he left his father's firm and came to London as manager to Messrs. Samuel Worrsam and Co., who had established a small factory in King's Road, Chelsea, for making saw-mill machinery.

Later, he filled a partnership which was left vacant by the death of one of the firm. He became senior partner of the last-mentioned firm in 1868, when he took into partnership Mr. Frederick Josselyn, of Ipswich, and the style was changed into A. Ransome and Co.

A foundry was subsequently acquired in Battersea, which business, on Mr. Vincent Sydney Woods becoming a partner in 1880, was known as Ransome, Josselyn and Woods.

The two businesses were amalgamated in 1893, when the firm was converted into a limited liability company, under the title of A. Ransome and Co., Ltd.

In 1900 the company moved from Chelsea and Battersea to Newark-on-Trent, the new premises covering ten acres of ground.

When Mr. Allen Ransome started in business the only wood-working machines at that time in use were vertical log-frames, deal frames, circular saw-benches, and moulding machines; whereas at the present time the firm alone have patterns for over 1,000 different machines for working wood.

Until two years ago (when he removed to the Isle of Wight) he took an active part in the business of his company, attending daily at the works, and, as chairman, presiding at the board meetings.

He was for many years an enthusiastic volunteer, having joined the South Middlesex Rifles in 1859—the first recognized corps to be formed. He was Captain of the 1st Middlesex Engineer Volunteers in 1860, he became Major in 1867, and four years later was gazetted Lieut.-Colonel. He continued to command the Corps until he resigned in 1879. In 1873 he received the honour of a knighthood of the Austrian Order of Franz Josef.

For the last two years of his life he had lived at Bembridge, Isle of Wight, and in June of this year he went to Newark-on-Trent to attend a board meeting there of his company. While there he had an attack of influenza, which was followed by pneumonia, and his death took place on 28th June 1913, at the age of eighty.

He was for many years chairman of the firm of A. Ransome & Co. of London and Newark-on-Trent. He was the pioneer of woodworking machinery in this country, and many of the improvements in this branch of engineering which have been adopted during the last half-century are due to his practical experience and inventive genius. His services in this respect were recognised by the Emperor of Austria, who, on the occasion of the Vienna Exhibition in 1873, decorated him with the first-class Order of Franz Josef.