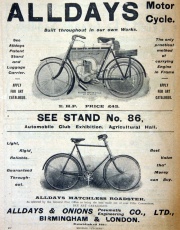 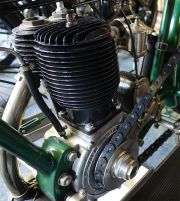 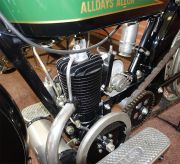 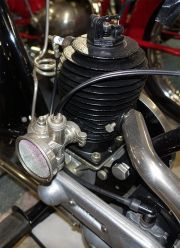 The firm was based in Sparkbrook, from 1903 to 1915, and then at Fallows Road, Small Heath, Birmingham, and had its roots in the seventeenth century. During the nineteenth century they manufactured bicycles.

1898 The company built its first powered tricycles fitted with a De Dion engine.

1901 They produced a machine with a Minerva engine and then moved on to the Werner layout.

1903 They also started making motorcycles in 1903 under the Alldays-Matchless name; these had no connection with the London based Matchless company.

1903 Alldays and Onions produced their own 2.25hp engine that was fitted in a cradle to the loop frame. A 3.5hp forecar was also listed.

1911 Only the larger, belt-driven model with rigid forks was listed. The company revised the 3.5hp model and although it was still belt driven, it now had two-speed gearing and Druid forks. This well-built machine was fairly inexpensive. Later that year the Alldays-Matchless appeared. This had a 6hp twin engine, three-speed gearbox and all-chain drive.

1915 The firm moved to Small Heath and started to produce their motorcycles under the Allon name (see below), with two-stroke engines. The machines included a 539cc JAP V-Twin model.

WWI: They built mostly motorcycles, returning to cars on cessation of hostilities.

1923 The Alldays and Onions name appeared again. They listed the Alldays Sports with a 348cc sv JAP engine, two-speed gearbox and either all-chain or chain-cum-belt transmission. It was listed for only that year.

1927 The Alldays and Onions name reappeared once more when two models were offered, both with four-stroke engines. They were built for one year only.

1915 the name was adopted by Alldays and Onions of Birmingham, when they switched to producing a single two-stroke model. The machine was fitted with their own engine, with drip-feed lubrication. An unusual feature was the horizontal crankcase joint and the top half in one with the cylinder. It drove a two-speed gearbox by chain. There was also a single-speed version with either Druid or Saxon forks.

1916 The model was available that year, but production ceased due to the war.

1919 The machine returned to the market after the war and little had altered.

1922 The option of a three-speed gearbox was added and production continued in that form for the next few years.

In 1927 only, the company returned to producing four-stroke motorcycles under the name of Alldays and Onions.