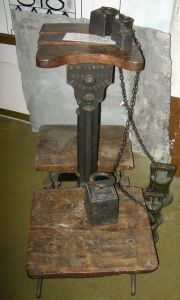 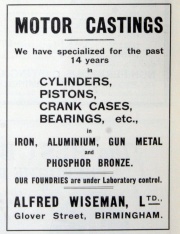 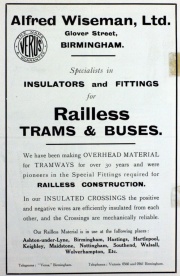 Alfred Wiseman , makers of overhead material for tramways, of motorcycles, gear specialists and makers of industrial locomotive and marine gear boxes, of Birmingham.

1898 Alfred Wiseman established the Electric Tramway Equipment Co with works in Conybere Street, Birmingham, using his own design of machines.

1903 The business had expanded so Wiseman took on further premises in Glover Street, Birmingham where he had room for 200 workers. Here, as well as making switchboards for tramways, he started gear cutting, which later became a major business in its own right. Wiseman developed special machinery for this purpose.

1930s Manufactured transmissions for trams and trolley buses, some locomotives and tractors[2] and heavy oil engines.

1933. Company name changed to Alfred Wiseman and Co (1933). They specialised in gears, including industrial locomotive and marine gear boxes. During the 1950s Wisemans supplied type 15RLGB transmissions for 153hp & 204hp shunting locomotives made for British Railways by Barclay’s of Kilmarnock in 1956-8. They also supplied gears for Baguley-Drewry and Thomas Hill locomotives. In 1962 Ruston & Hornsby acquired the company with plans to use spare capacity at the Ruston & Hornsby works at Grantham and merge the 2 companies’ gear making operations.[3]

1921 The Sirrah was brought out as the cheaper, lightweight version of the Verus, fitted with a 292cc two-stroke Union engine, and two-speed Burman gearbox in solo or sidecar forms.

The range expanded quickly and included models with a wide range of capacities: from Blackburne; JAP; Bradshaw; Barr and Stroud; and Wiseman. All had Burman gearboxes and the frames and forks were conventional.

1923 Late in the year they adopted a new universal frame for all models with the tubing formed to avoid all but one joint, which was welded rather than brazed and lugged.

Note: When production ended, the name of Sirrah had already found its way onto a number of special purpose machines, including an inspection trolley that could run on South American railway lines. A similar device that could run on road or rail, was also produced for the Indian railways.

Verus were motorcycles produced from 1919 to 1926. It was the de luxe marque of the company.

1919 The line began with lightweights with 211cc and 269cc Verus two-stroke engines. The smaller was single speed, the other with a Burman two-speed gearbox and chain-cum-belt.

1920 Those two models remained and were joined by two Blackburne four-strokes, a 348cc and 499cc sv, with two- and three-speed Burman gearboxes respectively.

1921 It was the same for that year, when trials were conducted with V-twin Blackburne-engined sidecar outfits.

1922 The simple lightweight and the 499cc Blackburne models went, and the 348cc four-stroke was given the option of a three-speed gear and all-chain drive.

1923 Only the four-strokes remained, with extra models being introduced with 248cc and 348cc ohv Blackburne and 248cc and 346cc JAP motors.

1924 The range carried through and the universal Wiseman tubular frame, with a single welded joint, appeared on both the Verus and Sirrah ranges. For the 348cc ohv Blackburne sports model there was a high-level exhaust pipe running along the off-side of the machine (setting a vogue for many others in the years ahead).

1926 The range was reduced to two - a 348cc sv Blackburne and 344cc ohv JAP. Both had three-speeds and the Burman gearboxes. It was the final year of production.

Weaver were motorcycles produced from 1923 to 1925. The marque was named after its designer who was the works manager at the company

1923 The first model was known as the Cyclette and was an open-framed commuter machine with the marque's own 150cc ohv engine, single-speed and chain final-drive.

1924 That model continued and was joined by a true lightweight motorcycle known as the Colonial model. It had a 130cc version of the same engine, two-speed Burman gearbox, all-chain drive and 24-inch diameter road wheels. Later in the year, either a 147cc Villiers or Aza two-stroke engine became an option.

1925 Only the motorcycles continued. It was the final year.