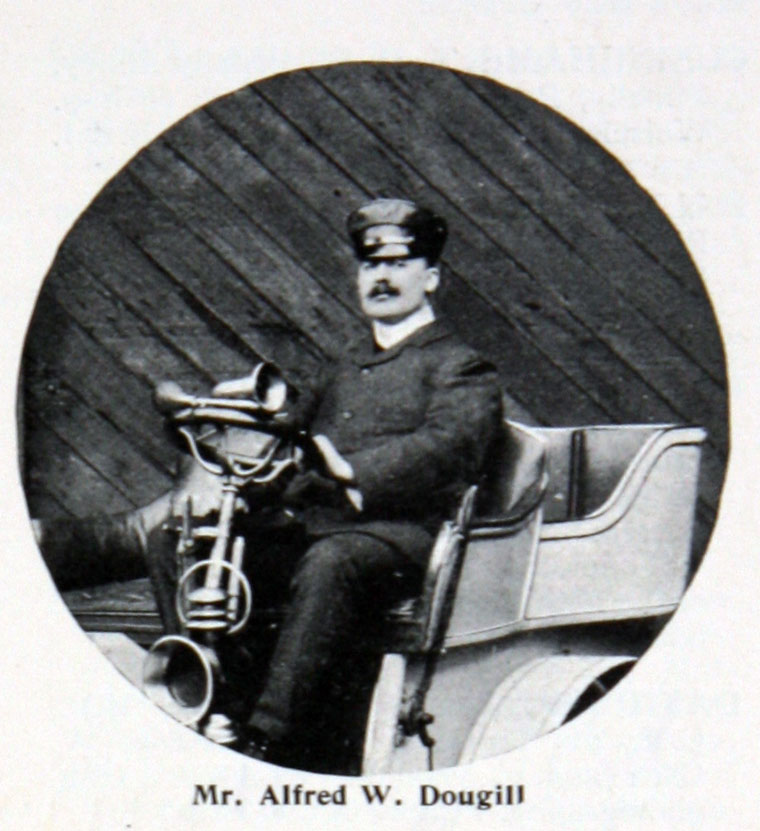 1907 Went to work for Wolseley Tool and Motor Car Co

1940 December. Buried. 'Claimed to be the designer and constructor of the first motor car — it bore the number "UM 1" — Mr Alfred W. Dougill was buried at Maidenhead, Berkshire, yesterday. Mr Dougill was a native of Leeds and was also responsible for the design and construction of the caterpillar motor sleighs used in the late Capt. Scott's Antarctic expedition. At one time he was associated with Lord Kenilworth in the Wolseley works'[6]

ALFRED WILLIAM DOUGILL was born in 1877 and was educated at the Central High School and Leeds University. After serving a four years' apprenticeship with his father's firm, Messrs. Dougill and Company, Ltd., he was employed during 1899 as engine erector to the Wheeler Wilson Manufacturing Company, in London, and in the following year he was placed in charge of gas and oil engine and pumping installations for Mr. J. S. Duncan in Paris.

From 1901 to 1905 he was successively chief draughtsman and designer, and works manager, to Messrs. Dougill's Engineering, Ltd., in Leeds, and in the following year he was appointed manager to Mr. Alexander Ross in Wellington, New Zealand, for whom he was engaged on the development of marine motors. He also travelled extensively in connection with the marketing of automobiles and marine engines in Greece, Italy, Africa, and other countries. In 1907 he entered the service of the Wolseley Tool and Motor Car Company, Ltd., Birmingham (now Wolseley Motors, Ltd.), and remained with that firm until 1926.

He was appointed superintendent of the new works for the complete manufacture of commercial vehicles and aircraft engines and machinery in 1913, and during the war of 1914-18 he was engaged on the development of a new type aero-engine and the manufacture of naval gun mountings. He held the appointment of superintendent of foundries and forges from 1919 to 1923 and was works manager for the remainder of his service. He was responsible for the manufacture of engines for racing motor boats, and also for the design and construction of motor sleighs which were used in Arctic and Antarctic expeditions, including Captain Scott's last Antarctic expedition. Mr. Dougill was managing director of Imperia Motors, Ltd., of Maidenhead and Liege, from 1927 until 1934, and manager and part owner of Maidenhead Industrial Estates from 1935 until his death which occurred on 23rd December 1940.

He was elected an Associate Member of the Institution in 1913 and was transferred to Membership in 1920.

Alfred William Dougill was born in 1878 and educated at Leeds High School and Leeds University. Apprenticed at his father's engineering works in Leeds, he was responsible for the design and construction of the first motor-car wholly made and constructed in Leeds.

In 1906 he joined Wolseley Motors, Ltd., as Experimental Manager and was later in charge of aircraft production at Wolseley's.

In 1926 he went to Maidenhead as Managing Director of Imperia Motors, of Maidenhead and Liege.