Grace's Guide is the leading source of historical information on industry and manufacturing in Britain. This web publication contains 142,866 pages of information and 228,796 images on early companies, their products and the people who designed and built them. 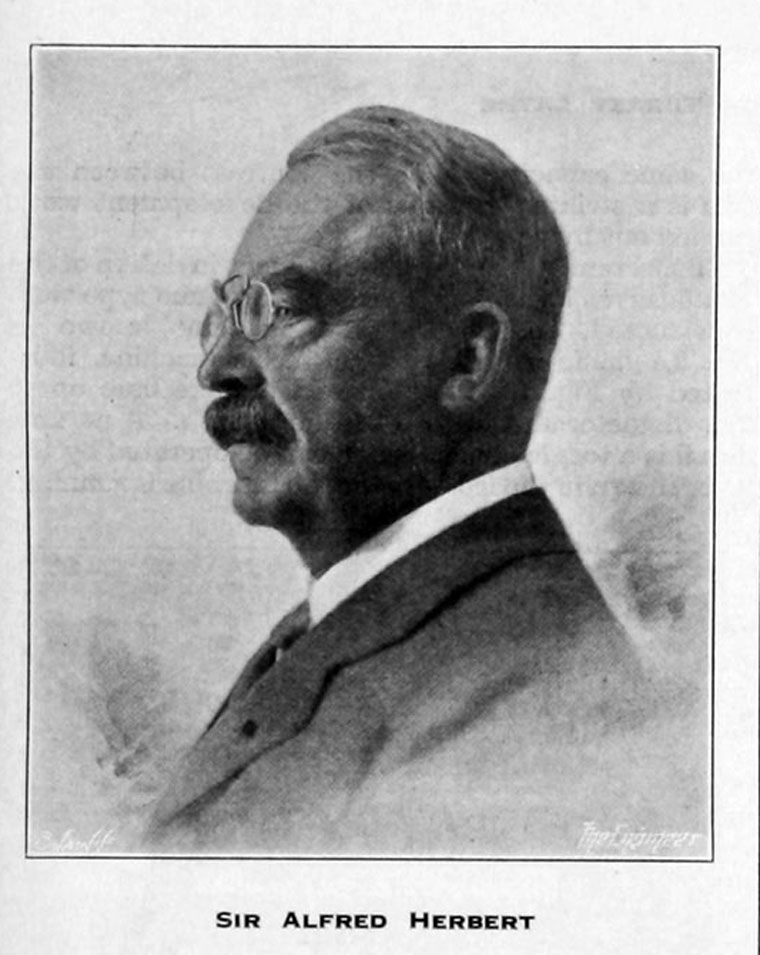 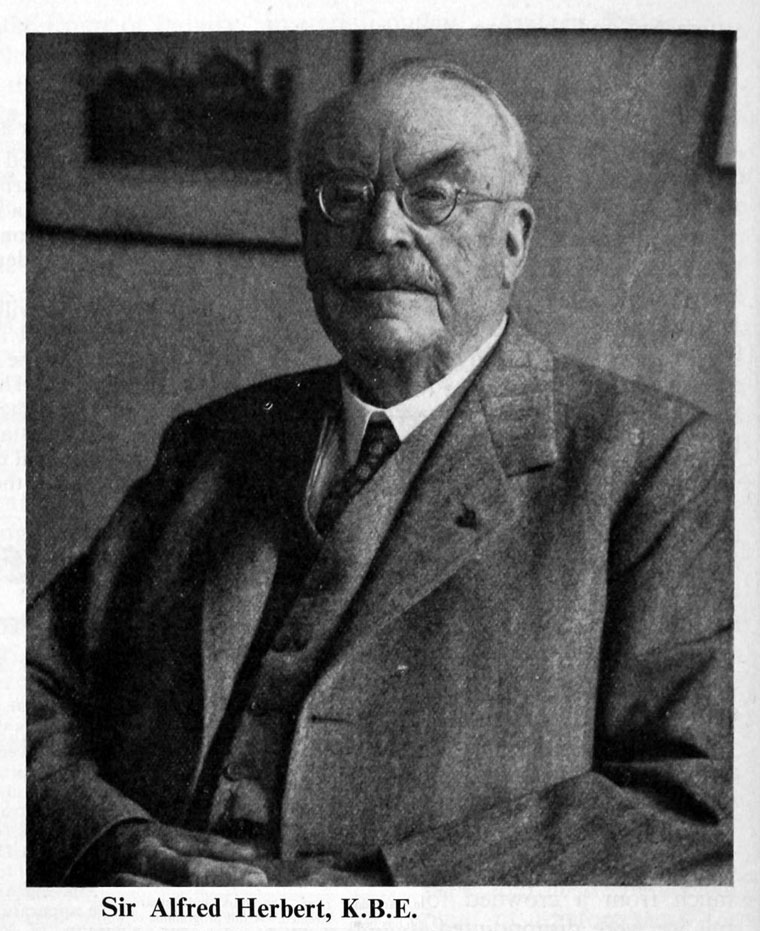 1866 September 5th. Alfred Edward Herbert was born at Leicester the second son of William Herbert (1826-1908), building contractor and farmer, and his wife, Sarah Anne, née Thompson (1831- ). The extent of the Herbert family fortune was considerable. His father, in addition to owning a town house in a salubrious area of Leicester, was the largest landowner in the parish of Whetstone, south of Leicester. His elder brother was William Henry Herbert.

Alfred Herbert was educated at Stoneygate Private School, and was destined for University and/or parsonage, until he met up with an old school friend William Sammons Hubbard, who worked on a lathe at J. Jessop and Son in Leicester. Herbert was fascinated by what the small lathe produced, so he persuaded his father to let him follow his friend's example. Subsequently he became an apprentice at Jessops.

1887 Herbert became the manager of Coles and Matthews of The Butts, Coventry (where his brother William Henry Herbert was a director), and began producing machinery for the cycle trade, with guaranteed orders from the Premier Cycle Co that his brother owned.

1888 The firm was offered to Herbert for the price of £2,375 and he immediately entered into partnership with a former school friend and fellow apprentice, William Sammons Hubbard, under the name of Herbert and Hubbard, making boilers and general engineering equipment. The fathers of each of the two men provided their sons with a capital of £2,000 each. Initially, production concentrated on ploughing tackle and steam rollers but moved very swiftly to making machine tools and tubing directed at the cycle trade

By 1894 Herbert had bought out Hubbard, who left the business, which was turned into a limited liability company Alfred Herbert. Alfred became the managing Director while his older brother was Chairman of the company.

1910 On the death of his brother William, he became chairman.

SIR ALFRED HERBERT died suddenly at Hurstbourne Priors Hampshire, last Sunday, May 26. He had lived long, for he was nearly ninety-one, and certainly his life was a full one. Sir Alfred was a distinguished member of the British machine tool industry, in which he spent nearly seventy active years; he was a leading citizen of, and a generous benefactor to, Coventry, and by many he will be remembered for his love of the country and country sports.

Sir Alfred, who was born on September 5, 1866, was the son of a Leicestershire farmer. He was educated at Stoneygate School, Leicester, and there were expectations at one time in his youth that he would enter the church.

Sir Alfred's interest in engineering, however, led him to persuade his father to agree to an apprenticeship with Jessop and Sons, of Leicester. When the apprenticeship was completed, he was offered a position as works manager of a small engineering business, in Coventry, owned by Coles and Matthews. The principal activities of that business were repair work and the building of small boilers, together with some agricultural machinery contracting.

After a year or so as manager, Alfred Herbert had the opportunity to purchase the business for a "relatively small amount." In this venture he went into partnership with Mr. W. S. Hubbard, and, under the style of Herbert and Hubbard the business was extended by the production of various machines including pill sorting and ribbon making machines. At the time, however, the early 1890s, a marked development of the cycle manufacturing industry was beginning, and the demand for machine tools suitable for cycle making was increasing. Herbert and Hubbard were immediately interested. Sir Alfred himself recalled quite recently that the first machine which the firm actually produced for bicycle work was a polishing lathe; it was followed by a simple drilling machine, and subsequently by a 5in centre back-geared hand lathe with compound rest.

The outcome of this development of a small engineering business was the formation in 1894 of a limited liability company registered as Alfred Herbert, Ltd. The major portion of the firm's work in its early days was concentrated upon the manufacture of machine tools for the cycle industry. But it was not long before Alfred Herbert, Ltd., was undertaking agencies for American machine tools. Progress was rapid; Sir Alfred, the founder, chairman and managing director of the firm, soon came to be recognised as a machine tool authority. The business which had a not very significant start has, over the years, grown into an organisation with four factories in this country, employing over 5,000 people, and having either an associated company or an agent in forty-eight countries overseas.

Naturally, in his later years, Sir Alfred reminisced always modestly about the growth of his company. The 1890s, he wrote, were a lucky time to start making machine tools, for the repetition methods of the cycle trade were having no small influence on other industries then growing up, among them electrical engineering, the motor-car industry, the manufacture. of typewriters, telephones, and steam turbines, and, subsequently, the aircraft industry. Sir Alfred saw to it that his company studied the needs of those industries and adapted its products to meet their requirements.

The contributions made by Sir Alfred and his firm during the two world wars were considerable. In the early part of the 1914-18 war, Sir Alfred became deputy director-general at the Ministry of Munitions, and was subsequently appointed Controller of machine tools. It was in recognition of his services in those positions that, in 1917, he was created a K.B.E.

When the second world war came Sir Alfred was in his seventies, but with his characteristic energy, there were many services which he rendered to the nation, in addition to carrying the added responsibilities of his business. A number of the addresses that he delivered and of articles that he wrote on subjects concerned with the war effort and the requirements of the post-war world were published a few years ago under the title Shots at the Truth. Some of them, we are proud to remember, originally appeared in THE ENGINEER. The book is an illuminating commentary on problems that puzzled many a mind. When it appeared, Sir Alfred wrote that over sixty years of his life had been spent in building machine tools, than which, he added, "I know no more interesting job."

There were, of course, many other services to industry, education and public welfare which Sir Alfred readily performed. He was president of the Machine Tool Trades Association, and, for no less than the past fifty-two years, had been president of the Coventry Engineering Society. To the city of Coventry, there were many gifts and endowments, prominent among them being the Lady Herbert Garden and the Art Gallery and Museum. It was indeed fitting that he should be accorded the Honorary Freedom of Coventry in 1933.

The very aged tend to drop out of the public eye. It is forty years ago that Sir Alfred, as controller of machine tools during the first world war, was a public figure. It is twenty or more years since he was an active figure in the work of the Machine Tool Trades Association. But if since the second world war his public appearances had become rare, in his own private affairs and those of his firm Sir Alfred remained as energetically active as ever. In his younger days he had been a somewhat controversial figure. For he combined with that force of character and personality, which rapidly brought him to the top, an independent force of mind. He did not care to take any ideas from others ready made ; and if those ideas did not seem to him to accord with common sense he was quite prepared to say so, however unpopular his own views might prove to be. Moreover, he was not content only with speech. In so far as matters lay within his own control he was not to be withheld from taking action merely because others disapproved. With increasing age, however, he became more tolerant, not of opposition he remained somewhat of an autocrat to the end but of people ready fearlessly to support opinions opposed to his own. He had, indeed, little use for yes-men.

Almost to the very end of his life he continued to take an active part in the direction of his company, spending several days a week in Coventry and his weekends at home in Hampshire. Though in his last few years he was content to leave much of the work in the hands of others, he took a particularly close interest in the safety of his work people, requiring to be notified every week about any accidents, however small, that had occurred.

Socially he gathered around him a wide range of friends and acquaintances, delighting especially to offer young people the chance to experience first-class shooting and fishing. Over his household he ruled as an autocrat brooking no opposition; but he was a singularly benevolent autocrat, ever careful for the happiness, health and well-being of those who served him. Until the last few months of his life he was blessed by a continuance of physical health and well-being. Attended by Piper, who would drive his car over the fields to a shooting butt or to the river's bank, he took an active part in country sports. If on a warm summer's day in his last decade he might retire after a strenuous morning's fishing to his car, ostensibly to read The Times, there was always Piper by to arouse him if the trout should start to rise. And after a full day's sport many a guest would be kept up until the small hours talking of shooting or fishing, or the nature of the universe, or the philosophy of good and evil, or of people he had met or of anything which happened to be interesting his active mind. It will be sad grief to many people to learn that he has gone wherever it is that good men go, and to none a greater grief than to those who dwelt in his household and saw and spoke to him daily.

Sir Alfred, who was educated at Stoney Gate School, Leicester, was well known to all mechanical engineers for his outstanding work in the technical development of machine tools and in the organization of the machine-tool industry. He founded the firm which bears his name in 1894.

Sir Alfred Herbert's name was also well known internationally through his pioneer work in all parts of the world where engineering is practised. His work received recognition abroad and many countries conferred signal honours upon him, including: Officer of the Legion of Honour (France), Officer of the Order of St. Leopold (Belgium), and Award of the Order of St. Stanislaus (Russia). In 1933 he received the Freedom of the City of Coventry.

During the 1914-18 war Sir Alfred was Deputy Director General, and later Controller of Machine Tools, Ministry of Munitions. He was created a Knight of the British Empire in 1917.

Sir Alfred was for many years President of the Machine Tool Trades Association.