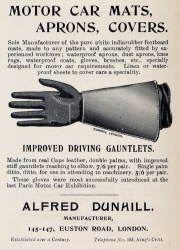 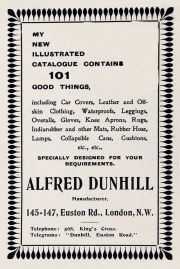 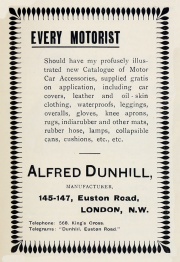 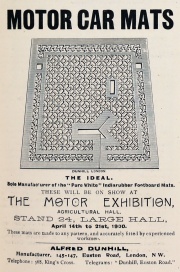 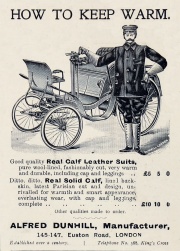 1861 Frederick Dunhill was a sacking manufacturer; his son Henry was a commercial clerk[1]

1870 At Frederick's death, his son, Henry, was in business as a dealer in sacking. Later he became a dealer in pianos and music.

The sacking business was run from the Euston Road, also making, among other things, accessories for horse-drawn vehicles.

1887 Henry's son, Alfred, was apprenticed to his father's harness-making business.[2]

1893 Alfred acquired the sacking business and quickly demonstrated his acumen by switching emphasis to the needs of the fledgling motor industry.

By 1895 Alfred had established Dunhill's Motorities, a range of products for the motor enthusiast (except for the motor car) which were then sold by Alfred Dunhill.

Dunhill was determined to capture the market for motor accessories and so stopped selling by mail order to concentrate on retail sales.

1902 Alfred opened his first shop in Conduit Street, Mayfair, selling Motor Equipment, such as clothing and accessories, to both chauffeurs and their employers. Dunhill invented the "windshield pipe", which protected sportsmen from flying sparks - and so he entered the tobacco trade.

1903 Company incorporated, including both the waterproof goods and the motor equipment businesses, the two businesses being under one management.

1904 Dunhill applied for a patent for his unique pipe.

1907 He opened his first tobacconist shop in Duke Street, St James's. From the choice of location it was obvious that Dunhill intended to offer the very best to an elite clientele. His classy shop offered everything for the discerning smoker - special blends of tobaccos and a whole array of smokers' requisites.

c1908 Dunhill's Ltd was established at the Conduit Street premises to sell the Dunhill's Motorities clothing and other products.

1913-1917 For a list of the models and prices see the 1917 Red Book. Briefly imported the French Tweenie automobile.

1914 Listed as tarpaulin supplier and supplier of motor covers

WWI. The war provided the company with its real opportunity to prosper — both in the mail-order business and by changing the smoker's image to one of the home-sick soldier alone with his match and cigarette - but it was the pipe that became more closely associated with the name Dunhill.

Post-WWI. After the war came both expansion and the commissioning of fresh products. The company always ensured its products were covered by patent and trade mark, a policy prosecuted with vigour from the outset.

The early 1920s saw the wholesale and export side of the business move to Notting Hill Gate, close to the pipe and cigarette division located at Campden Hill Road.

1921 The firm received its first royal warrant, as tobacconist to Edward, prince of Wales; it enjoyed his loyal custom even during his years in exile.

The 1920s also saw the opening of shops in New York, Toronto, and Paris as well as a branch in the City of London to serve the appreciative businessman.

c1923 Alfred Dunhill Ltd was incorporated as a public company[5]. The business concentrated on tobacco products and pipes.

1924 Dunhill's 'The Pipe Book' revealed an extraordinary knowledge of the history of the pipe. The self-seasoned briar root, used for the manufacture of all top-rate pipes, was hailed by Dunhill as the ideal pipe material, and although briar pipes sold by his company were nearly twice the price of its rivals, there was never a shortage of customers.

The inter-war years were also a time for development. The Unique lighter, a product for the pocket that Dunhill and his brother had much interest in, was a great improvement on the unreliable match and sold in thousands. This was followed by several table models and joined a long list of other original ideas, including the Lite-up handbag for ladies who needed to see its contents in the dark.