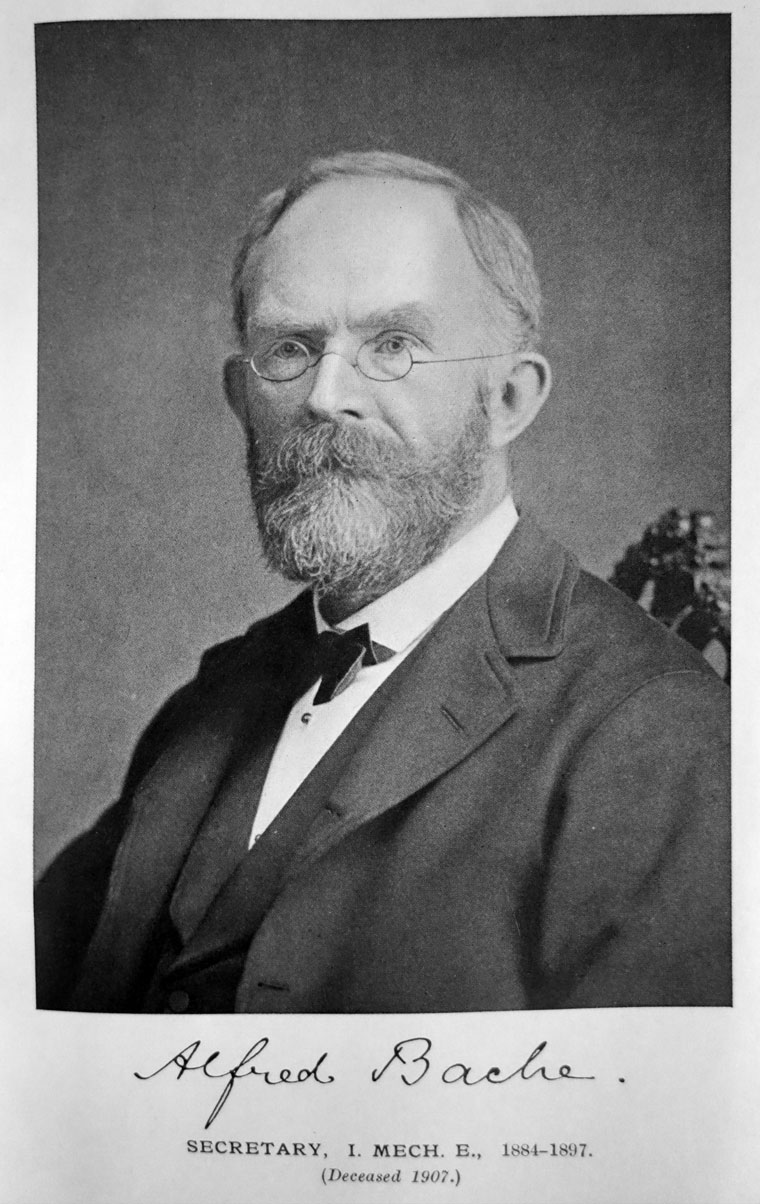 ALFRED BACHE, late Secretary of the Institution, whose portrait is given with this memoir, was born on 5th August 1835, at Edgbaston, Birmingham, being the second child of the Rev. Samuel Bache, a Unitarian minister, and the founder — in conjunction with the Rector of Birmingham and a layman — of Hospital Sunday.

He was educated at the Birmingham and Edgbaston Proprietary School, where he gained many well-earned honours and distinctions, and matriculated in 1852 at London University, being first in Classical Honours and winning the Exhibition.

Later on he entered the engineering department of Queen's College, Birmingham, where, in the laboratory recently instituted, many of the tools were forged, sharpened, and tempered by his hands.

He graduated B.A. (London) in 1854, and was third in the Honours List for Mathematics and Natural Philosophy.

On leaving college in 1854 he entered the office of this Institution, then located in Birmingham, as assistant to the Secretary, Mr. William P. Marshall.

Amongst his other attainments he was an exceptionally fine draughtsman, and for many years the illustrations which appeared in the Proceedings were prepared by him. Scrupulous accuracy was one of his strongest traits, and he spared no time or trouble to secure it. This greatly augmented the value of the publications issued under his direction. He had an excellent knowledge of the Greek, Latin, French, German, Italian, Norse, Swedish, and Danish languages, which was of material assistance in his work; both before he became Secretary and during the last ten years he was a regular contributor to the Foreign Abstracts of the Institution of Civil Engineers.

In January 1869 the Council appointed him Assistant Secretary of the Institution, and in 1877 he removed with the headquarters to Westminster. Thus one of his chief interests in life was terminated, for, under increased pressure of work, organ-playing was given up. He had been a pupil of Mr. James Stimpson, organist of the Birmingham Town Hall, and when that gentleman was absent Mr. Bache gave the periodical organ recitals for which that city had long been renowned. The organ in the Cross Chapel at Moreton Hampstead is a memorial of his skill in organ design; it was erected in 1873, during the ministry of his brother, the Rev. Kentish Bache.

In 1884 Mr. Bache was elected Secretary of this Institution in competition with a large number of candidates, and occupied that position until 1897, when failing health compelled him to resign his post, after having served the Institution in various capacities for forty-four years. During the period of his Secretaryship the membership increased from 1,554 to 2,496, and its invested funds from £10,617 to £35,893.

In fulfilment of a wish formed in his youth, he subsequently moved to Penzance, and there he was able to devote himself to subjects of varied interest, mainly musical and literary. He was a warm supporter of the Penzance Library, being a member of the Committee; but his chief solace during a long and tedious illness was his passion for music, a profession in which his family had excelled. This he retained to the last, taking great interest in the work of the Penzance Choral Society and other local institutions.

Mr. Bache's kindliness and urbanity made him easily approachable; but in character lie was modest and unassuming to a degree, and only those who knew him intimately enough to penetrate his habitual reserve knew what an engaging personality lay in the background.

His death, after a long and exhausting illness, occurred at Penzance on 6th September 1907, at the age of seventy-two, when the Council of this Institution, in expressing their deep sympathy with his family, put it on record that "throughout the whole of his connection with the Institution he was most indefatigable and self-denying in promoting its welfare."

He was elected an Associate of the Institution of Civil Engineers in 1877, and was a Member of the Society of Arts, of the Royal Geological Society of Cornwall, and of the Royal Cornwall Polytechnic Society.

. . . the energetic secretary of the Institution of Mechanical Engineers for about fourteen years . . [more]