Grace's Guide is the leading source of historical information on industry and manufacturing in Britain. This web publication contains 150,658 pages of information and 235,200 images on early companies, their products and the people who designed and built them. 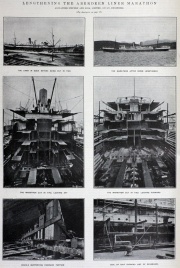 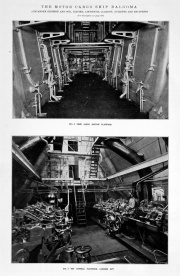 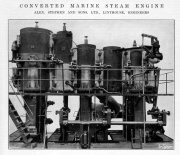 Alexander Stephen and Sons Limited, often referred to simply as Alex Stephens or just Stephens, was a British shipbuilding company based in Linthouse, Govan in Scotland, on the River Clyde.

1750 The company has a long and distinguished history, beginning its shipbuilding activity in 1750 in Aberdeen.

By 1813 William Stephen was established as a shipbuilder at Footdee, Aberdeen.

1814 His eldest son, William, after release by the French leased a yard for himself at Arbroath.

1825 Arbroath got into difficulties; William, senior, signed a bond making himself responsible for the debts of William, junior.

1826 the number of shipbuilders in Aberdeen fell from ten to eight, each of whom had two ships on the stocks, unsold, while every year until 1835 was described as a very dull one for shipbuilding[2]

1826 The brig Unicorn, commanded by William's youngest son, James, was lost with all hands off the Irish coast. Other sons had business troubles, one died.

1828 William senior was declared bankrupt due to debts of the Abroath yard.

The Aberdeen business was taken over by Alexander; the name of the firm reverted to Alexander Stephen and Sons. Alexander paid off the debts over a period of seven years.

1829 Alexander Stephen took over his brother William's yard at Arbroath.

1830 The company gave up the lease on the Aberdeen yard. Took over another yard in Abroath which was improved with steam-engines to drive the saws, and a new joiners' shop.

1840 Alexander moved his family into a large new house at Lady Loan, overlooking the yard but trade declined.

1849 Built one of the first covered berths in Scotland. Invited Mr. Smith of Smith's Dock who was the only other owner of a covered berth in the kingdom, to inspect the installation at Dundee.

1850 Alexander Stephen decided to establish a new yard on the Clyde, to take advantage of the developments in steam-engines and the use of iron for shipbuilding. On 6th April, 1850, he arranged a lease of the Kelvinhaugh yard from Robert Black for twenty years from May, 1851. His eldest son, William, took on the Dundee yard.

1852 the first ship, the Typhoon, was launched at Kelvinhaugh - an iron sailing-ship.

1858 James and Alexander Stephen bought the Kelvinhaugh business, repaying their father over a number of years.

1859 James Stephen left the company which was carried on for some years by Alexander Stephen junior alone.

1868 Alexander Stephen junior, purchased the 32 acre Linthouse estate and in 1869 started laying it out as a shipyard. It eventually housed a mansion and houses for 120 workers and their families along with the usual technical zones required to build ships.

1870 The company launched its first steamer which was used to trade through the Suez Canal to India. The 1870s were characterised by the company being able to make larger ships using its new facilities

1871 The lease of Kelvinhaugh expired in May; the last ship to leave the yard was the Lima, launched in November, 1870.

1872 The Kelvinhaugh yard was leased by Aitken and Mansel; eventually the Queens Dock was excavated on the site of the back yard. The remainder of the front yard and slip dock was occupied by Shearer and Sons.

1880s The Linthouse yard moved into steel hull construction; its first steel steamer was completed in 1882.

1883 the yard experienced the worst tragedy in shipbuilding history, when 124 workers were killed when a small steamer overturned while being launched. The yard managed to recover from this and went on to establish a sterling reputation for building passenger and passenger/cargo-liners for companies all around the world

1889 Triple expansion engines for the SS Victoria and Domira. Illustrated.

1894 Shipbuilding ended at the Dundee yard.

Late 1890s The Dundee yard was sold to a group of Dundee businessmen and renamed the Dundee Shipbuilding Co Ltd.

1899 Alexander Stephen died: he was succeeded by his sons Alexander E. Stephen and Frederic J. Stephen in partnership with their uncle John Stephen

1900s The yard began building banana boats and it eventually built twenty six. The yard was instrumental in the establishment of the Caribbean / West Indian Banana trade having built one third of the Elders and Fyffes banana fleet. The yard also continued cementing its reputation for quality built liners

1920s Throughout the 20s the yard made six large passenger liners and there was a brief dip in production during the slump of the early 20s. However, an order for four liners stimulated production, and the yard continued making cargo-liners, steam tankers, and banana boats during this period

1930s The yard closed between 1932 and 1934 due to lack of orders. During this period the yard was expanded and modernised with electric cranes and a yard covering 48 acres.

Late 30s the yard received orders for small cargo-ships and Australian coastal passenger ships. Also at this point, the Admiralty began ordering vessels as part of the build up to War.

WWII The yard made aircraft carriers, and did this along with cruisers, mine-layers, destroyers, sloops, minesweepers and tank transport ferries.

1950s The yard began specialising in welding techniques and rearranged the layout to accommodate this. Consequently, many orders for motor cargo ships, ferries, cargo liners and banana boats continued apace.

1960s The yard added tankers and dredgers to its repertoire, completing five tankers including British Bombardier, which was the longest ship ever built at the yard at 725 feet long. In addition the yard built diesel-electric suction dredgers.

1967 the yard became part of Upper Clyde Shipbuilders. However, soon after, the Linthouse yard was closed and then demolished, after the latter organisation collapsed in 1971.

1980s The Linthouse yard (which had fallen into disrepair) was bought by the Scottish Development Agency in 1987. The yard was demolished except for the engine shop which was then transported, piece by piece, to the Scottish Maritime Museum at Irvine.

Read the history series for the firm here: A Shipbuilding History. 1750-1932 (Alexander Stephen and Sons)