Grace's Guide is the leading source of historical information on industry and manufacturing in Britain. This web publication contains 147,360 pages of information and 233,518 images on early companies, their products and the people who designed and built them. 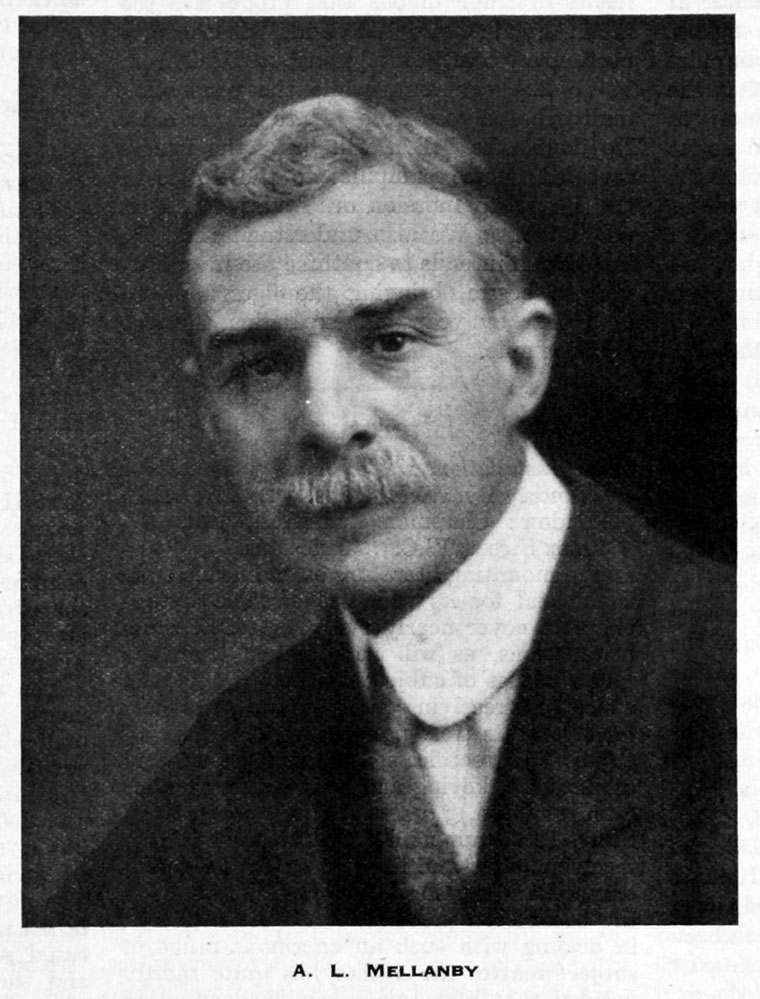 of the Municipal School of Technology, Manchester.

"...Alexander Lawson Mellanby was the son of the late Mr. John Mellanby, a shipyard manager of West Hartlepool. He was born on July 3, 1871, and received his general education at the North-Eastern County School, Barnard Castle. At the age of sixteen, he began an apprenticeship in the Central Marine Engine Works, Newcastle-upon-Tyne... Read More"

Professor ALEXANDER LAWSON MELLANBY, D.Sc., LL.D., emeritus Professor of Civil and Mechanical Engineering in the Royal Technical College, Glasgow, died on 26th November 1951, at Bridge-of-Weir. The Institution has lost one of its elder statesmen, for although he was particularly concerned with the affairs of the Scottish Branch, being the first Chairman of that Branch, he also served on the Council from 1928 to 1940, and he was much concerned with the work of several of its Committees. He was also a member of the Marine Oil Engine Trials Committee from its inception in 1922 until its close in 1931.

Professor Mellanby was born at Hartlepool on 3rd July 1871. He went to Barnard Castle School and afterwards, at the age of sixteen, began an apprenticeship at the Central Marine Engine Works, West Hartlepool. After completing his apprenticeship, he entered the Durham College of Science, where he graduated B.Sc. with honours, and also gained an 1851 Research Scholarship. In 1895 he went to McGill University, Montreal, where his special line of research was on multiple expansion engines. He returned to Great Britain towards the end of 1896, and spent another year on research at Newcastle upon Tyne. He was then appointed chief technical assistant in the Hartlepool works of T. Richardson and Sons, the firm later known as Richardsons, Westgarth and Company, Ltd. He remained in this post only about a year, and then entered the academic profession, to which he devoted the rest of his life.

His first post was that of chief lecturer in engineering at Battersea Polytechnic, to which he was appointed in 1898. About a year later he went to the Manchester College of Technology to assist the late Professor J. T. Nicolson in the design and equipment of the laboratories, workshops, and power station. He remained in Manchester until 1905, when he was appointed to the Chair of Motive Power Engineering in the Royal Technical College, Glasgow, and he remained in the service of the College until he retired in 1936. His success in the Chair was such that first the Department of Applied Mechanics, on the death of Professor Longbottom, and later the Department of Civil Engineering, on the retirement of Professor Moncur, were merged with Mellanby's department into a single Department of Civil and Mechanical Engineering and Applied Mechanics. Professor Mellanby rendered outstanding service not only to the Royal Technical College but also to engineering in Glasgow and the west of Scotland. While insisting on the importance of fundamental theory, he had a sure grasp of the practical aspects of any problem brought to his notice, and his services as a consultant were much in demand. He laid great emphasis on the importance of experimental work and built up in the heat engines and applied mechanics laboratories in Glasgow a range of equipment as fine as any in the country.

Following on his early work on reciprocating engines, he took up an intensive study of the flow of steam through nozzles and turbines, and was the author of several papers on this subject some of which were in collaboration with Dr. Wm. Kerr, who later succeeded him in the Chair. He was a regular contributor to the Proceedings of the North East Coast Institution of Engineers and Shipbuilders and the Institution of Engineers and Shipbuilders in Scotland, as well as to those of the Institution. He was a firm believer in the maintenance by academic institutions of close contact with practice, and at an early stage fostered the establishment of sponsored research projects for industry. He was against narrow specialization whether in courses of study, staff training, or experimental method, and took the view that sound judgement could be developed only by an adequate range of interest and experience. He was very popular with his staff and students, and followed their careers with interest long after they had left the college, always willing to give advice or a helping hand towards further advancement. He had great sympathy with the struggling part-time student as is shown by his close connexion with the National Certificate scheme, and little gave him greater pleasure than to pick out the really talented from this group and assist them to transfer to full-time courses. His quiet dignity and high sense of duty and service were recognized and respected by all who came in contact with him. He enjoyed a long and happy retirement, and his interest in matters educational and practical was unabated to the end. His death has left a real gap in engineering and academic circles in Glasgow and the west of Scotland. D. S. Anderson, Ph.D. (Glos.), B.Sc., M.I.Mech.E."