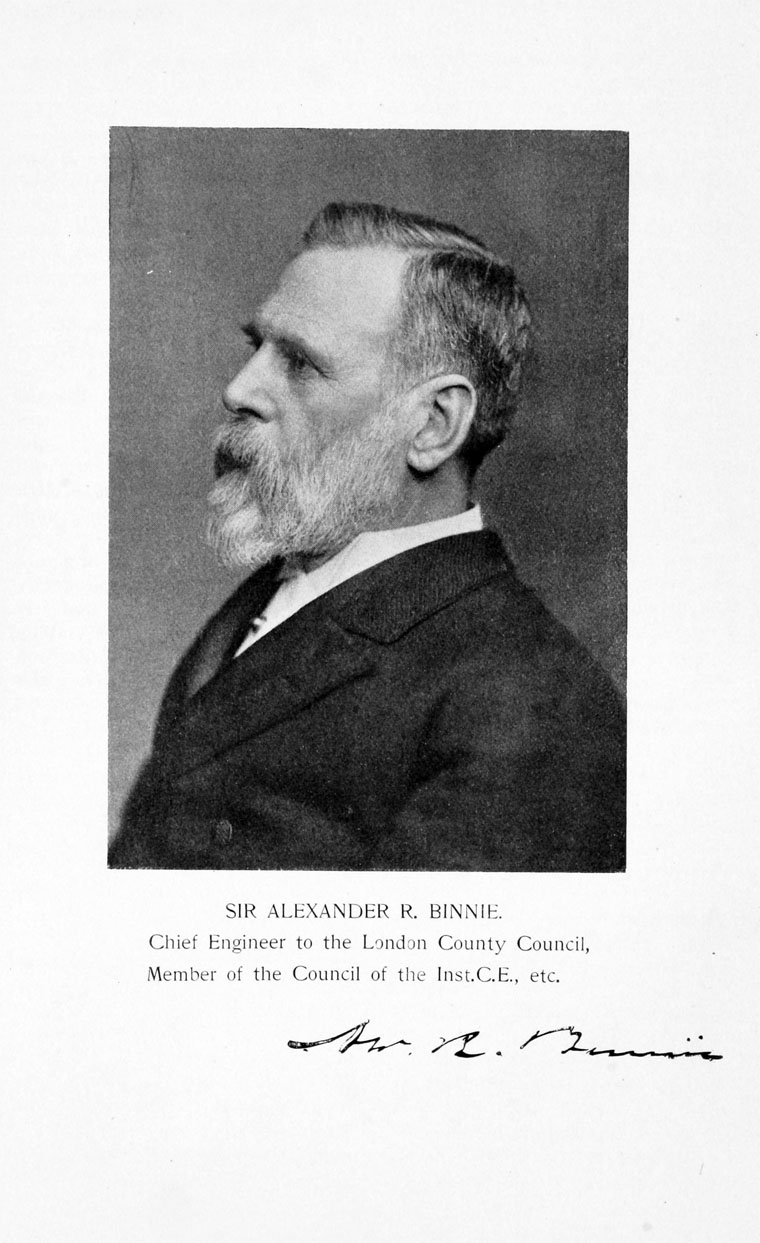 Sir Alexander Richardson Binnie (1839-1917) was a civil engineer responsible for several major engineering projects, including several associated with crossings of the River Thames in London.

As chief engineer for the London County Council, his design feats included the first Blackwall Tunnel (1897) and Greenwich Footway Tunnel (1902) (both in Greenwich, London) and, further upstream, Vauxhall Bridge (1906).

By then knighted by Queen Victoria for services to engineering, he was elected President of the Institution of Civil Engineers in 1905.

He also designed, with Sir Benjamin Baker, major parts of London's drainage system, including east London sewage treatment works at Crossness and Barking on the south and north sides of the Thames respectively (these were sited at the ends of the sewer outfalls created by Joseph Bazalgette during the late 19th century).

Binnie founded a firm under his name, which his son William J. Binnie took over on his father's retirement.

In 1909 Sir A. R. Binnie and Son merged with another engineering consultancy to become Sir Alexander Binnie, Son and Deacon; later it became Binnie and Partners and from the 1990s it has been part of the multi-national Black and Veatch consultancy.

Educated privately, be was articled in 1858 to the late Mr. J. W. Flanagan, and, on his death, to the late Mr. J. F. La Trobe Bateman, F.R.S., Past-President of the Institution of Civil Engineers, who carried out the great works of water supply for Manchester, Glasgow, and other towns.

On the completion of his pupilage he remained with Mr. Bateman as an assistant, resigning his position in 1862 in order to take up an appointment in connexion with the construction of new railways in Mid-Wales. There he remained till 1865, returning to London to enter into private practice.

In 1867, after examination, he secured a position as Executive Engineer in the Public Works Department of India. Delegated to the Central Provinces, he was posted to Nagpur, and during the time he remained there, he carried out the works for the supply of the City with water, from Ambajharia, about four miles distant. During his period of service in conjunction with the late Major Lucey Smith, he made discoveries of coal in the Chanda District which led to the construction of a railway, and the opening up of the coalfield, for which he received the commendation of the Government of India.

In March 1875 he was appointed Chief Engineer for Waterworks purposes to the City of Bradford, and during the fifteen years he held that position he repaired and reconstructed the Stubden, Leeshaw, and Leeming Reservoirs, and designed and constructed the reservoirs at Barden and Thornton Moor with their necessary conduits. One of the last acts he performed before leaving Bradford was the preparation of the plans and sections for the Nidd Valley Water Scheme, which, after long and protracted controversy, was adopted by the Corporation, and was carried through Parliament in the Session of 1890. The works then authorized have since, with modifications, been carried out by his successor, Mr. James Watson.

In March 1890 be was appointed Chief Engineer to the London County Council. This position he occupied for nearly twelve years, during which time there were constructed under his direction, among other things, the Blackwall and Greenwich Tunnels under the River Thames, and the Barking Road Bridge over the River Lea, and he commenced the new Vauxhall Bridge, which was completed by his successor, Sir Maurice Fitzmaurice, C.M.G. On the completion of the Blackwall Tunnel he received the honour of Knighthood from Queen Victoria.

In conjunction with the late Sir Benjamin Baker, K.C.B., K.C.M.G., he reported on the reconstruction of and additions to the main drainage of London, involving an estimated expenditure of about L2,500,000. These works he commenced, and they have since been completed by his successor.

He also projected and carried through Parliament the necessary works for the widening of the Strand and the important thoroughfares of Aldwych and Kingsway, connecting it with Holborn. Sir Alexander further assisted the London County Council in Parliament in many controversies which arose in connexion with the various proposals to carry the tramways from South London over Westminster Bridge and along the Victoria Embankment. He also conducted the Engineering case of the London County Council before the Royal Commissions on Metropolitan Water Supply in 1891-3 and 1897-1900, and in the Session of 1900 he deposited plans on behalf of that Council in connexion with the supply of London from the mountains of Wales.

On the completion of his engagement with the London County Council, Sir Alexander commenced private practice in Westminster, in which he was joined by his eldest son and later by Mr. Deacon. When the question of the transfer of the Metropolitan Water Companies to the Water Board occurred, he acted as principal Engineering adviser to the Board and subsequently as Arbitrator in connexion with the sub-division of some of the areas of the Companies.

In 1906 he reported to the Government of Ireland on the Bann and Lough Neagh Drainage, and from 1905 to 1907 he acted as Chairman of the Vice-Regal Commission on the Arterial Drainage of Ireland.

He visited Malta in 1909, at the request of the Crown Agents for the Colonies, to report on the water supply.

His firm were engaged at the time of his death in the carrying out of several large water schemes, including the new Birkenhead supply from the River Alwen in Denbighshire, and the supply of Merthyr Tydfil from the River Taf Fechan.

He became a Member of this Institution in 1887. He was President of the Institution of Civil Engineers in 1905.