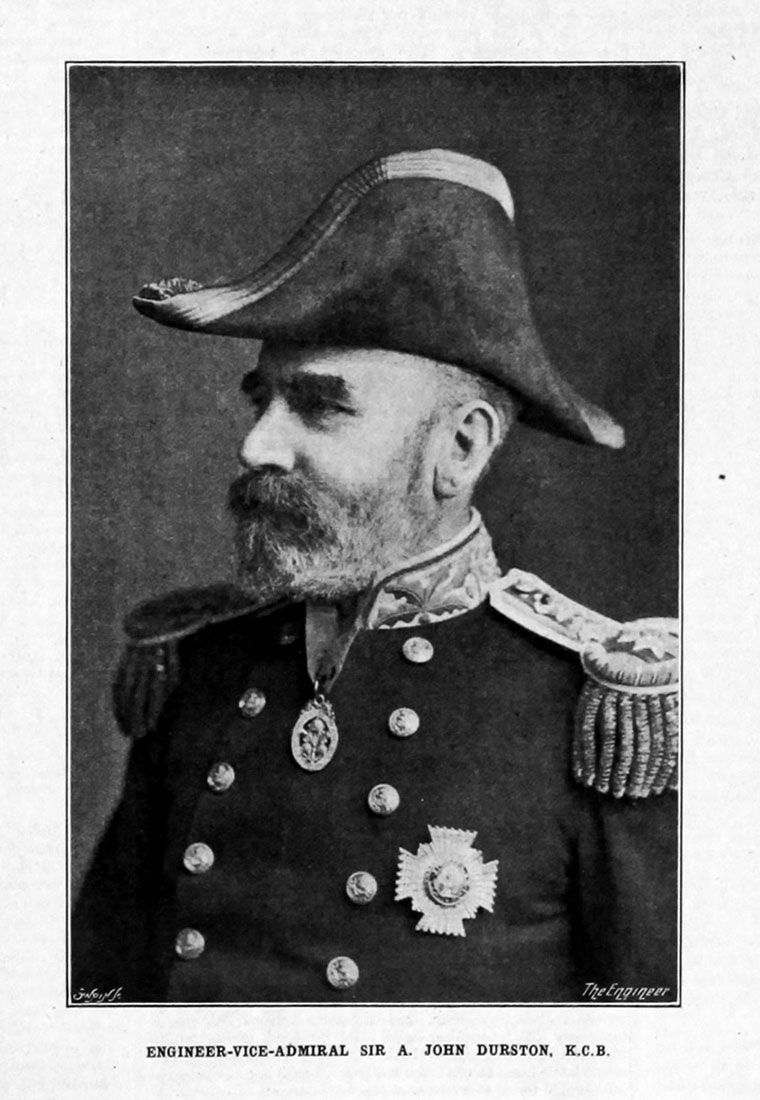 At the age of fifteen he obtained, in open competition, an engineer studentship in Portsmouth Dockyard, where he served for over five years, and he was entered as second-clam assistant engineer in 1866.

In the previous year he had gained a studentship in the Royal School of Naval Architecture in South Kensington, and had as contemporaries, Sir William H. White, Dr. Elgar, and Richard Sennett.

His first commission was in H.M.S. "Ocean," on the China Station, where he continued for three years.

Shortly after his return to England he was appointed, in October 1872, to Portsmouth, and five years later he was promoted to chief engineer.

In 1881 he was transferred to Sheerness Dockyard as head of the engineering department, and two years later he returned to Portsmouth as chief engineering manager.

In February 1886 he was promoted to Fleet Engineer, and Inspector of Machinery in 1888. A month earlier he had been appointed for service at the Admiralty, on the staff of the late Mr. Richard Sennett, and within five months he succeeded Mr. Sennett as Engineer-of-the-Fleet on his retirement.

In 1893 he was promoted to be Chief Inspector of Machinery, which title was altered in 1903 to Engineer Rear-Admiral, and in 1906 he became Engineer Vice-Admiral. At the time of his assumption of the office of Engineer-of-the Fleet, steam pressures over 150 lb. in naval ships were rare, and the tendency was to subject the boilers to a high degree of forced draught to get the all power, and leaky tubes became a source of trouble. Sir John Durston introduced the French type of Belleville boiler, practically doubling the steam pressure. Subsequently other types were adopted, and the Belleville boiler was dispensed with.

In 1901 the Parsons steam-turbine was introduced, first in destroyers and in 1905 in battleships — in H.M.S. "Dreadnought."

In 1907 he retired from the service, having received a year's extension, and the Admiralty formally recorded their high appreciation of his services. Official recognition was given of his work by his being made a Companion of the Order of the Bath in 1895 and a Knight Commander in 1897.

His death took place at Blackheath, London, on 18th April 1917, in his seventy-first year.

He became an Engineer Student at the age of 15 years, and took the Engineering Course at the Royal School of Naval Architecture, South Kensington, becoming a Fellow of this school. He entered the Royal Navy in 1866, became Chief Engineer, R.N., in 1877, and Chief Inspector of Machinery, B.N., in 1893. He served as Chief Engineer of Sheerness and Portsmouth Dockyards 1881-88 and joined the Admiralty in 1888. He retired from the Active List as an Engineer Vice-Admiral in 1905. Sir John was appointed to the position of Engineer-in-Chief of the Fleet in May, 1889, at a time when there were several difficulties to contend with, but the energetic and persistent way in which he dealt with them resulted in a substantial measure of success. He initiated and developed several new features which had the effect of maintaining the Machinery of the Fleet in a foremost position. Among the principal improvements he introduced was the adoption of the water-tube boiler. After an investigation into the construction and behaviour of the types in existence at the time, especially those employed afloat, he recommended to the Board of Admiralty the introduction into the Navy, at first on a limited scale, of the Belleville type. After satisfactory trials in the gunboat “Sharpshooter,” they were introduced in the large cruisers “Powerful” and “Terrible”. As is to be anticipated in making a new departure of this magnitude, many difficulties arose, but these were overcome by introducing modifications and later by the adoption of other types of water-tube boilers as they became developed and suitable for navy requirements. Probably no other step taken in naval construction evoked so violent a criticism in Press and Parliament as the adoption of the Belleville boiler. During Sir John’s period of office the Parsons steam turbine for propulsion and oil fuel for steam production were introduced. These features were so successful that their adoption rapidly became general. The oil-fuel installation finally adopted was largely the work of Sir John and his staff. He early recognized the advantages to be obtained by the use of oil fuel and had extensive experiments made in 1901, the eventual outcome being an installation of a simple and effective character which is now in general use in the Navy. He contributed to The Institution a Paper on ‘‘ The Machinery of War Ships,” November 1894, and a joint Paper on “ Recent Trials of the Machinery of War Ships, with results of experience on various points in connection therewith, with Sir Henry J. Oram, January, 1899, and he was awarded a Telford premium and the Watt and Stephenson medals.

He was elected a Member on the 6th April, 1897, and was also associated with several other professional institutions.