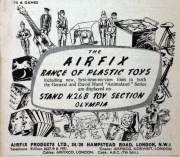 Airfix was a UK manufacturer of plastic scale model kits of aircraft and other subjects.

1939 Airfix was founded by a Hungarian businessman, Nicholas Kove, initially manufacturing rubber inflatable toys. The brand name Airfix was selected to be the first alphabetically in any toy catalogue.

1949 The company was commissioned to create a promotional model of a Ferguson tractor. The model was initially moulded in cellulose acetate plastic and hand assembled for distribution to Ferguson sales representatives. To increase sales and lower productions costs, the model was sold in kit form by F. W. Woolworth's retail stores.

1954 Woolworth's buyer, Jim Russon, suggested to Airfix that they produce a model kit of Sir Francis Drake's Golden Hind, then being sold in North America as a 'ship-in-a-bottle'. The kit would be made in the more stable polystyrene plastic. In order to meet Woolworth's retail price of 2 shillings, Airfix changed the packaging from a cardboard box to a plastic bag with a paper header which also included the instructions. It was a huge success and led the company to produce new kit designs.

1955 The first aircraft kit was released - a model of the Supermarine Spitfire, in 1/72 scale. This was a scaled-down copy of the Aurora 1/48 scale Supermarine Spitfire kit. Kove initially refused to believe the product would sell and threatened to charge the cost of the tooling to the designers.

During the 1960s and 1970s, the company expanded greatly as the kit modelling hobby grew enormously. The Airfix range expanded to include vintage and modern cars, motorcycles, figures, trains, trackside accessories, military vehicles, large classic ships, warships, liners, engines, rockets and spaceships, as well as an ever-increasing range of aircraft. Most kits were created at the "standard" scale of 1/72 for small and military aircraft, and 1/144 scale for airliners.

1963 Acquired the intellectual property and 35 moulds of Rosebud Kitmaster; this gave Airfix their first true models of railway locomotives in both 00 and H0 scales as well as their first motorcycle kit in 1/16th scale - the Ariel Arrow.

1977 Triang-Pedigree was put in the hands of the receiver

1987 Discharge of liquidators of Airfix Products[3] and Airfix Industries.