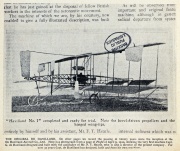 Note: This is a sub-section of Aircraft Manufacturing Co (Airco)

The Airco DH.1 was an early military biplane flown by Britain's Royal Flying Corps during World War I.

Geoffrey de Havilland was one of the pioneering designers at the Royal Aircraft Factory and was partially or wholly responsible for most pre-war "Factory" designs. When he left to become chief designer at The Aircraft Manufacturing Company (Airco) in 1914, his first design was strongly reminiscent of the F.E.2b, one of his last designs for the Royal Aircraft Factory. Like the F.E.2, the DH.1 was of pusher configuration, the aircraft accommodating its pilot and observer in two open tandem cockpits in the nose, the observer's cockpit stepped down below the pilot's and equipped with a machine gun. The wings were of typical fabric-covered, two-bay, unstaggered, unswept, equal span design, while the stabiliser and rudder were carried on the end of a long, open-framework boom.

The type, like the F.E.2b, was designed for the 120 hp (89 kW) Beardmore water cooled inline engine. However, all available Beardmore engines had been ordered for F.E.2b production, so the 70 hp (52 kW) Renault aircooled V8 engine was installed instead. With this powerplant the DH.1 was underpowered - but still had a creditable performance, and was ordered into production. The DH1 Flew at Hendon and an order for 49 production models were placed.

Airco was already occupied with later designs, so DH.1 production was undertaken by Savage Brothers of King's Lynn who had no experience of building planes and this delayed production.

The DH.1 saw operational service only in the Middle East theatre, where a few Beardmore powered DH.1As arrived in July 1916 - these were used by No. 14 Squadron RFC as escorts for their B.E.2 reconnaissance aircraft. An Aviatik two seater was claimed by a 14 Squadron D.H.1A in August for the only known victory of the type. The last known action by a DH.1 was on 5 March 1917, when one was shot down during a bombing raid on Tel el Sheria. No. 14 Squadron became an R.E.8 unit in November 1917 - and it seems probable the last operational DH.1 had gone before that date.

The other DH.1s served in training and Home defence units in the United Kingdom, finally being withdrawn from service in 1918.