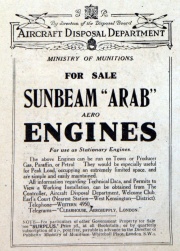 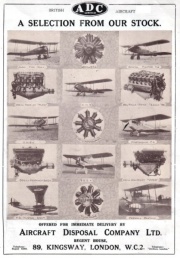 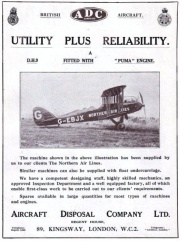 1920 March. Established to take advantage of the large number of World War I-surplus military aircraft on the market. ADC bought the entire available stock of surplus aircraft engines and spares, converted them to various civil roles before selling them. One of the founders was Frederick Handley Page. Sales department changed address to Regent House, Kingsway, London, W. C. 2.[1]

1924 Frank Halford was engaged to see how the stock of wartime engines could be modernised for resale; first the 80 h.p. Renault vee was given a redesigned cylinder head and valve gear which produced 140 h.p.; this was then called the Airdisco[2]

Then, in response to the needs of Halford's old friend, Geoffrey de Havilland for an engine suitable for a light aeroplane, the Cirrus was developed, essentially half an Airdisco; the first engine was built very quickly and rated, originally, at 60 h.p. This powered a very successful aeroplane — the Moth.

Another wartime engine which received Halford's attention at A.D.C. was the Siddeley-Deasy Puma, which he had developed originally as the Beardmore-Halford-Pullinger. An up-rated edition, the Nimbus, was developed by Halford out of the Puma. The cubic capacity was increased from 18.85 litres to 20.7 litres and the r.p.m. from 1,400 to 1,600, thus producing 335 h.p. for 665 lb weight.

The company had several sites across Britain including 11 acres (45,000 m2) of Regents Park in London known as Marylebone Green. Three of the National Aircraft Factories became part of the Aircraft Disposal Company including Aintree in Liverpool, Waddon in Croydon, and Stockport near Manchester.

The company's range of aircraft engines, the Cirrus line developed by Halford, continued to be manufactured by Cirrus Aero Engines Ltd and their successors:

1931 the Aircraft Disposal Company was reconstituted and became (part of) the Redwing Aircraft Co Ltd.