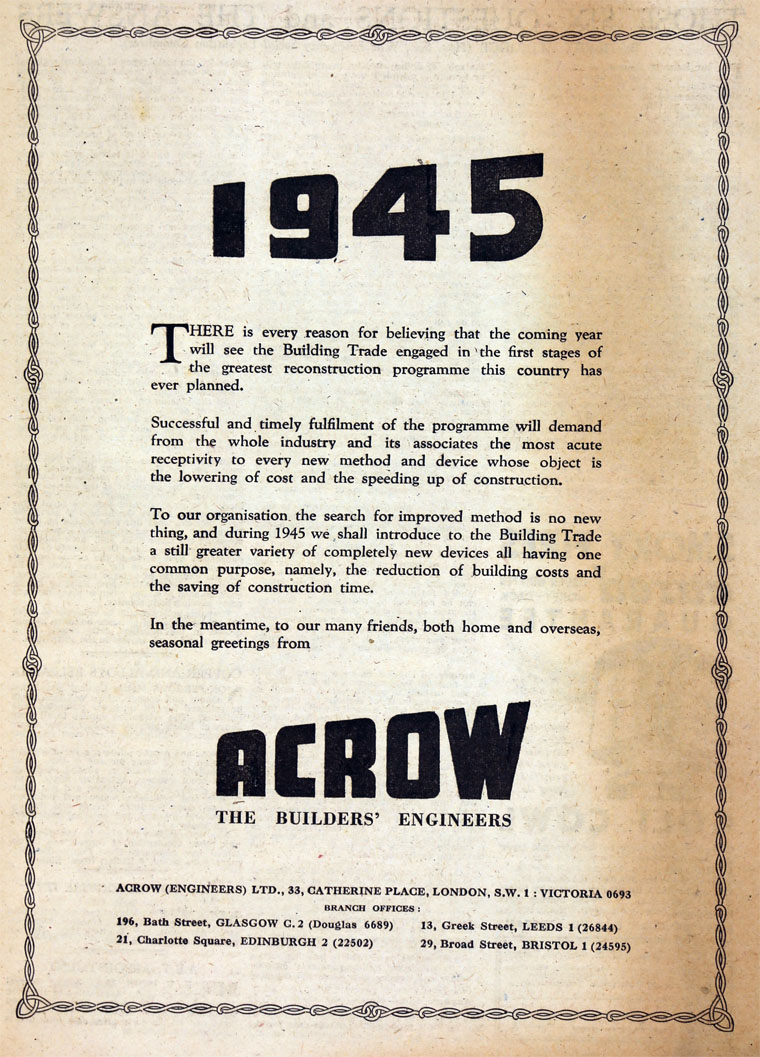 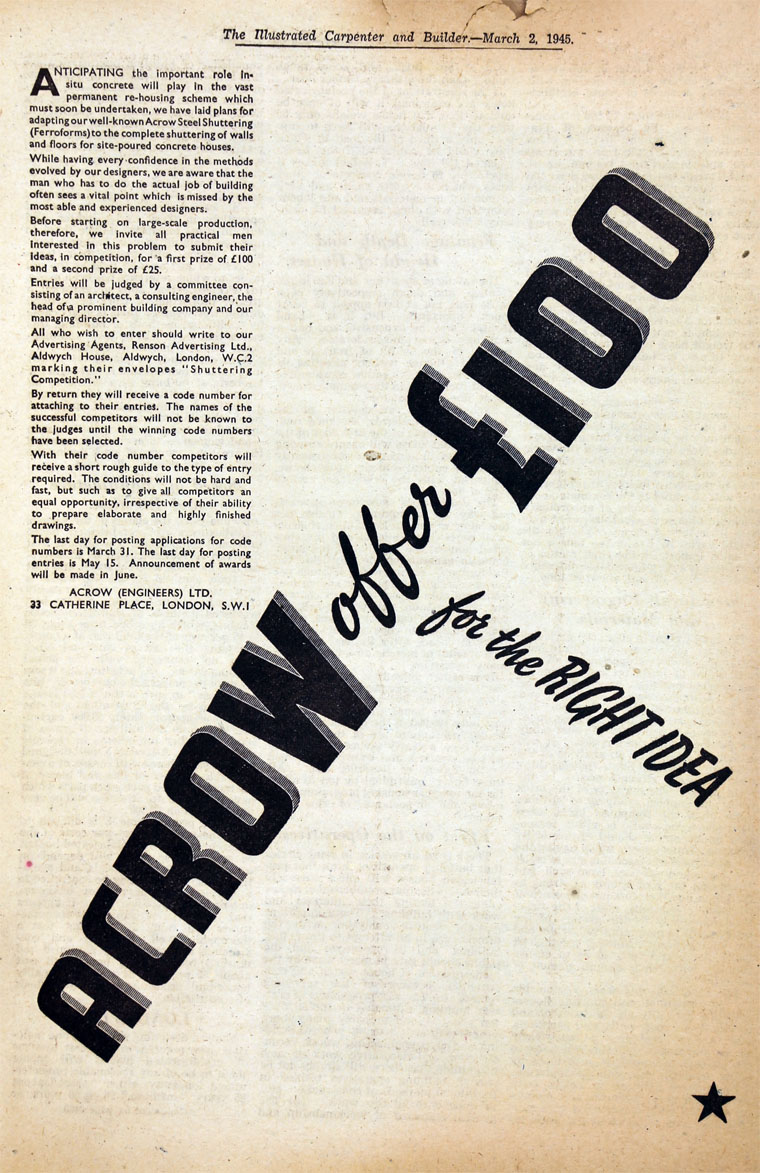 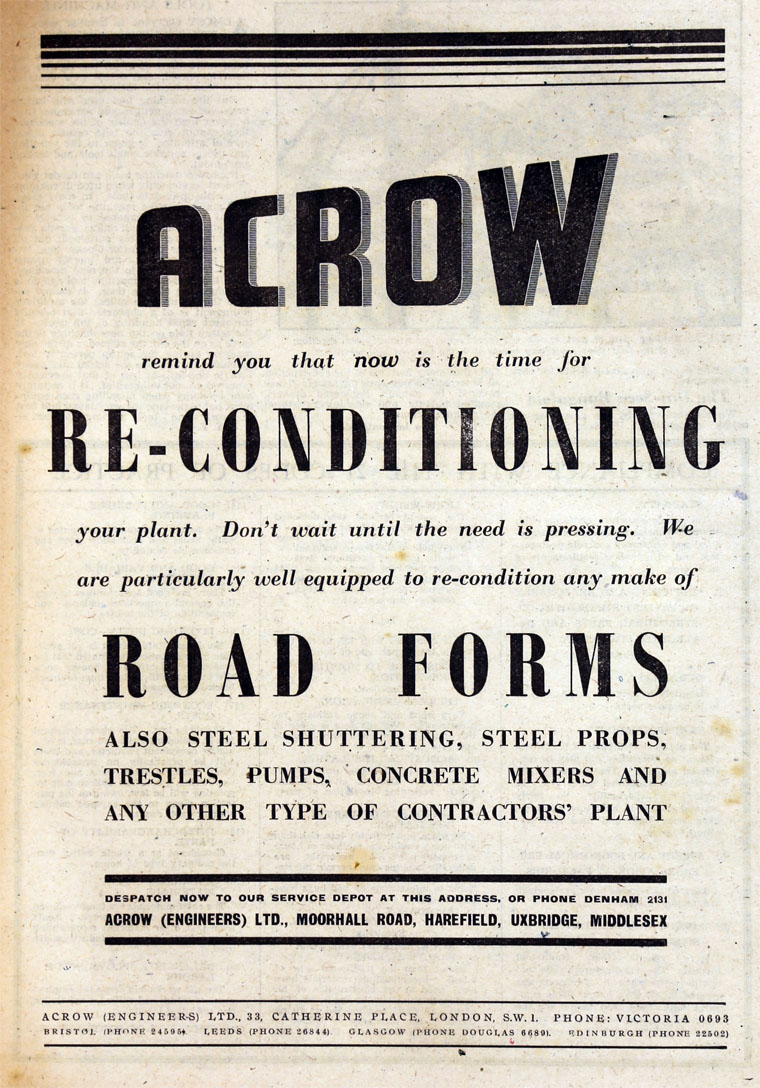 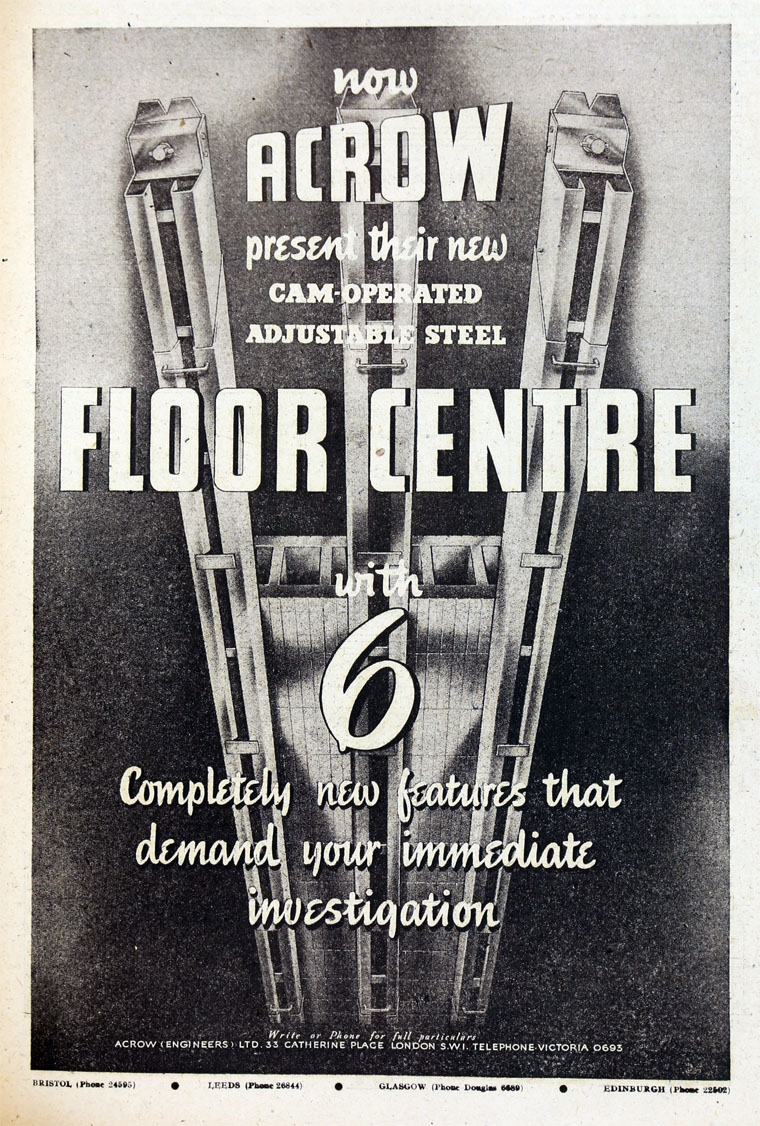 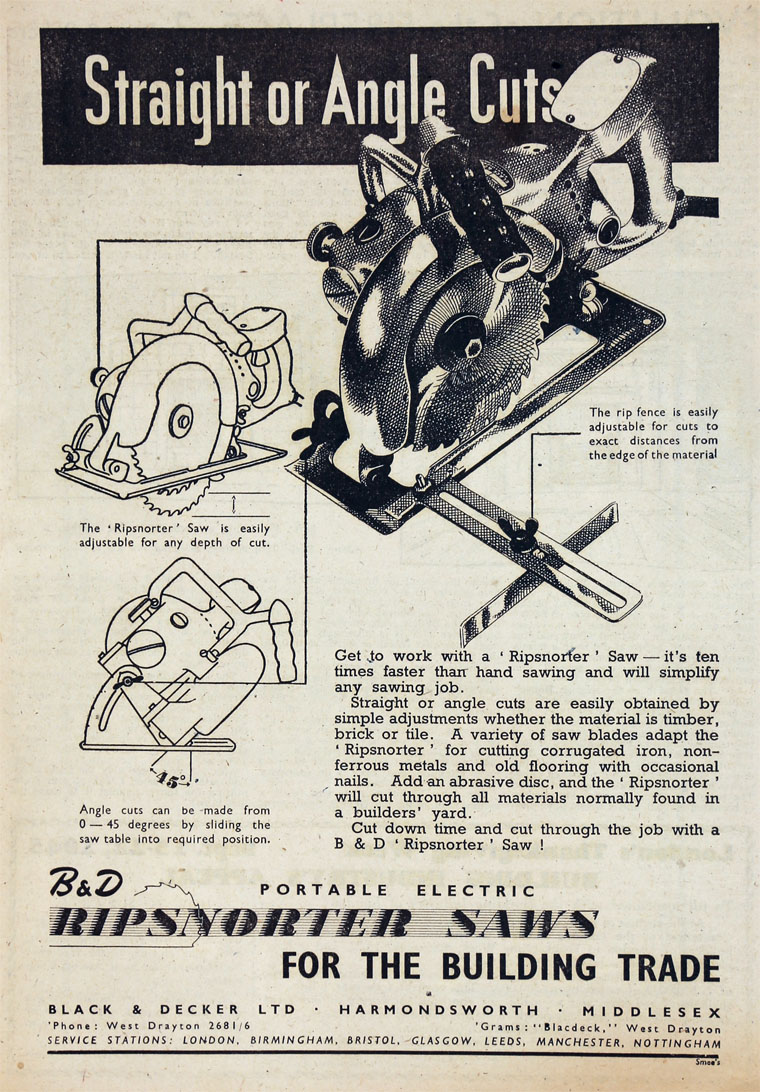 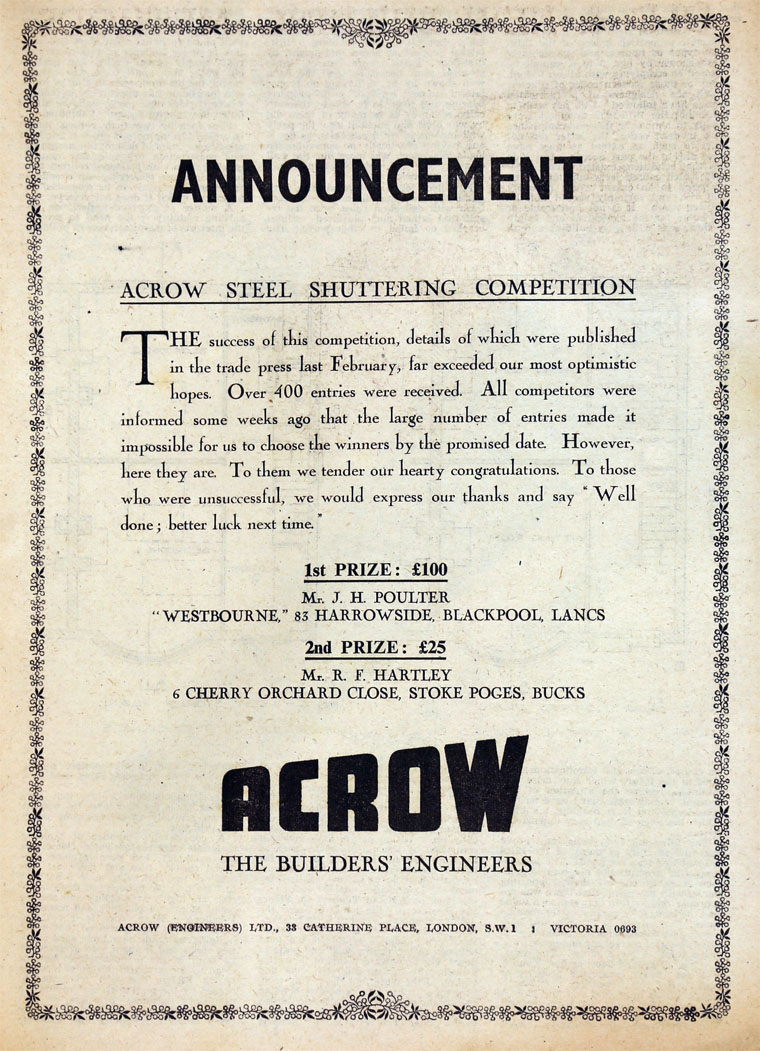 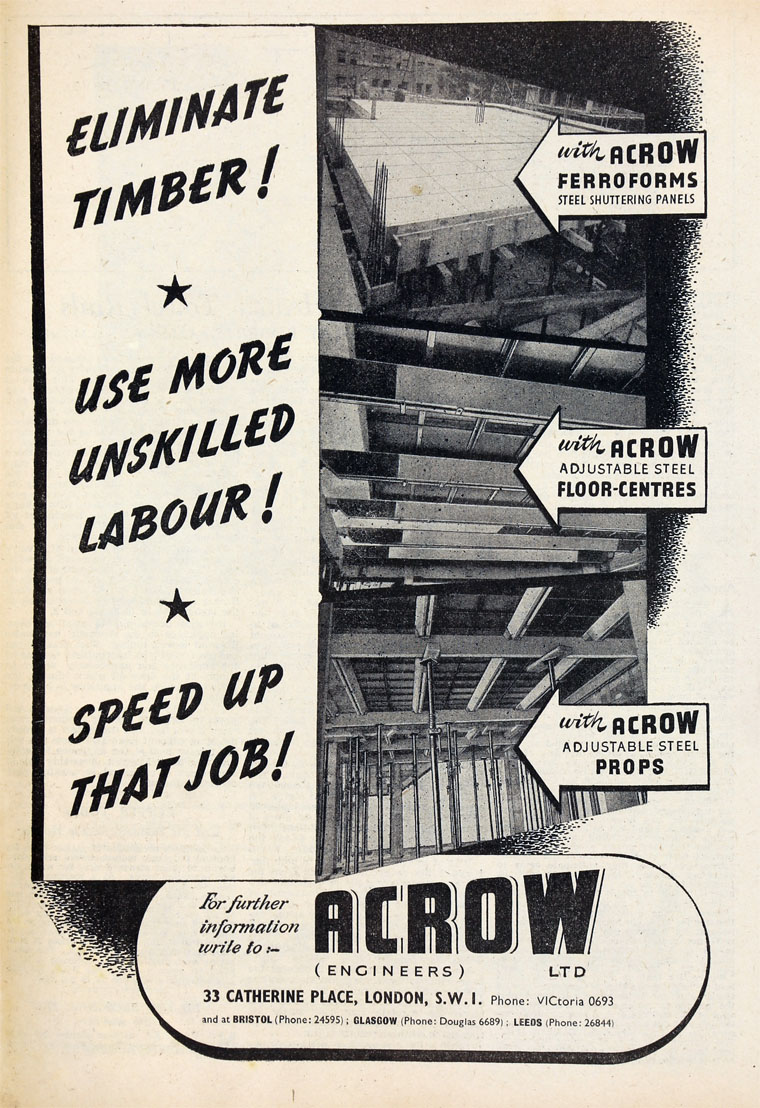 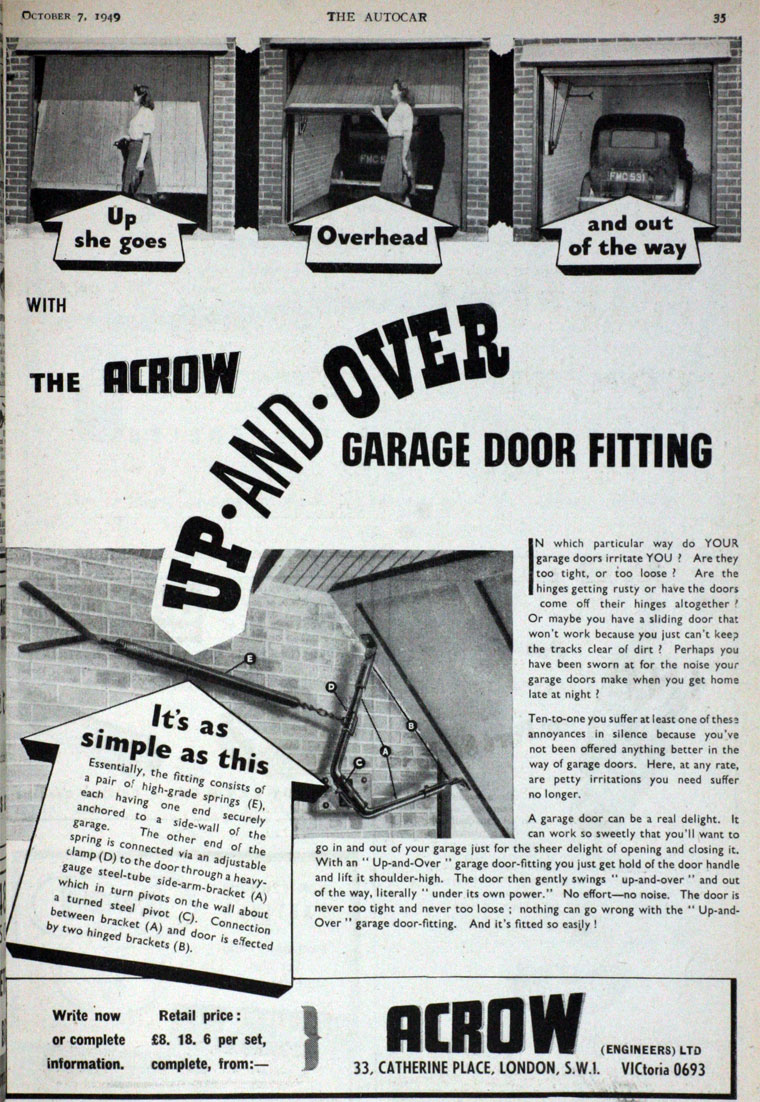 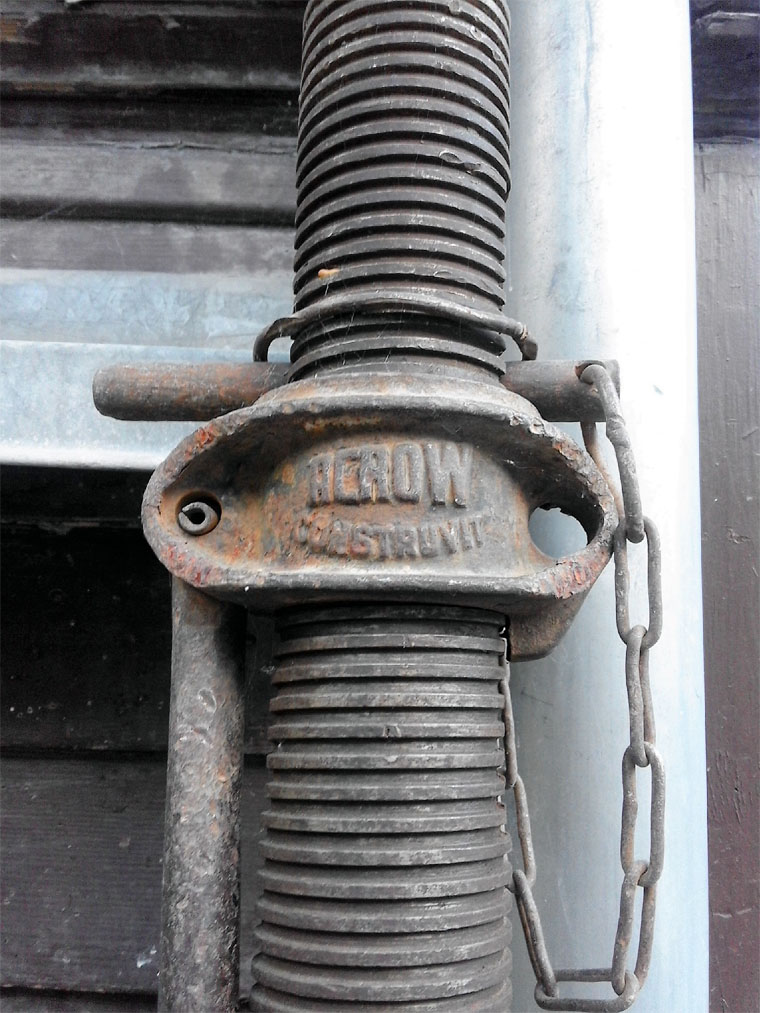 1912 William Aphonse de Vigier was born into an historical local family in Solothurn, Switzerland. His father, an eminent local lawyer, wanted his son to follow in his footsteps, but he had other ideas and signed up for an apprenticeship at Von Roll in Klus, moving on to a job at the Scintilla magneto works in Zuchwil.

The pull of the wider world, and continual disagreements with his father, eventually led him to pack his bags and head for England. His father was furious and warned him that he would not get a centime from him for any new venture.

1935 Aged 24, he arrived in London with only 1,000 francs (roughly £50) in his pocket, and an idea for an adjustable scaffold prop. He soon realised that he would have to manufacture it himself, so he rented a small premises under the railway at Bow arches in east London, and approached a well known local solicitor Arthur Crow to establish the company but the cost for doing so was £32, far more than he could pay, given that the deposit in the arches was £15, and on the offices around the corner in Charterhouse square £4.

He persuaded Arthur Crow to give him six months credit on his fee and, partly out of gratitude and partly on the basis that it would always come near the top in any directory or listing, he used the solicitor's name for his new company which became Acrow (Engineers) Ltd. The name was also used for his product the Acrow Prop, which soon became a generic name in the UK construction industry for such props.

He struggled for the first few months with very few sales, but thanks to Sir Robert McAlpine and Sons and Peter Lind, a Danish company, things eventually started to improve.

1938 Acrow moved into their first “proper” factory in Slough; de Vigier and his company were on their way.

By 1939 he had sold over 40,000 props. He was grateful to the two forward-looking companies and always gave them credit for their part in his success.

WWII. During the war Acrow's production was largely diverted to the war effort, making tank and aircraft parts, as well as formwork for the Mulberry Harbour, used in the D-Day landings.

Post-WWII. After the war, the company went public and started on a wave of expansion though acquisitions, that turned Acrow into a truly global business. New businesses included steel Bailey bridges, scaffolding and formwork.

1961 Manufacturers of equipment and plant for building, agricultural and forestry trades. [3]

1969 Bid for Allied Ironfounders but failed.

1972 Acrow (Engineers) became a world leading player in the cranes business with the acquisition of the Steel Group by now renamed Coles Cranes. This gave Acrow ownership of Coles Cranes which incorporated Neal and Co and Taylor and Sons and Priestman Brothers of Hull, the bulk of the UK crane industry.

1985 After several years of difficulties the Acrow group went into administration and the crane division, by now slimmed down to one production plant in Sunderland, was picked up by Grove.

De Vigier rescued parts of the business and in the late 80's gradually sold them off, largely to employee led MBOs.