1. The remains of the canal pass beneath the aqueduct. Former road bridge in foreground.

3. The floor of the aqueduct is assembled from three iron castings, joined by bolted longitudinal flanges. The castings are staggered to give the required skew of the aqueduct. 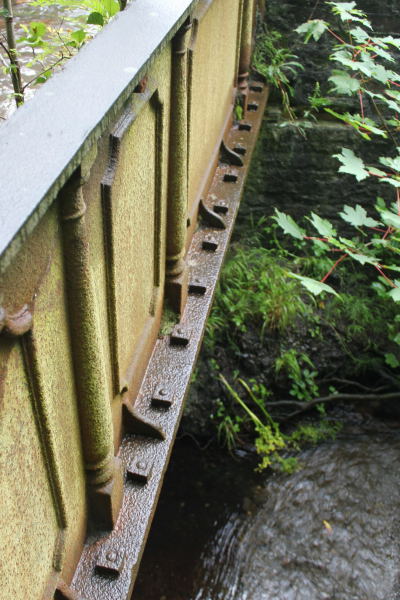 This is one of several small aqueducts built for a curious purpose - to carry streams over the Neath Canal to the River Neath. The stream in this case is Nant Ysgwrfa, and it now runs into the canal.

It is located on the former Neath Canal, immediately north of the B4242 500 yards west of its junction with Chain Road. There is a small lay-by (former gateway) adjacent to the aqueduct.

This cast iron aqueduct was built c.1835 by the Neath Abbey Iron Co, and is Grade II listed.

There is a similar aqueduct nearby - Farmer's Arms Aqueduct, which crosses at right angles to the canal, whereas the Aberpergwm Aqueduct is skewed. The skew is obtained by the simple expedient of offsetting the trough's floor plates (see Photo 3) and the side plates.