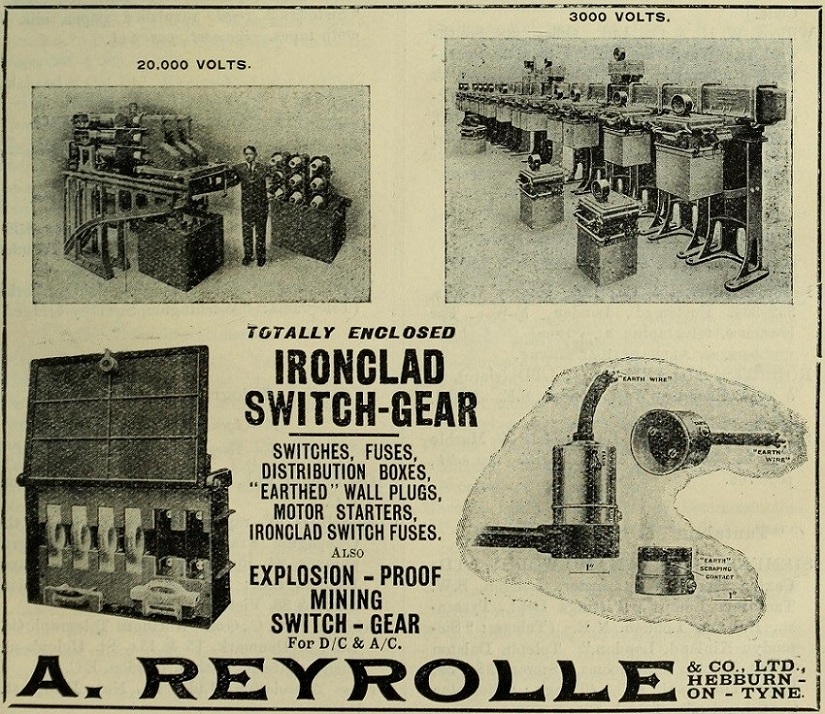 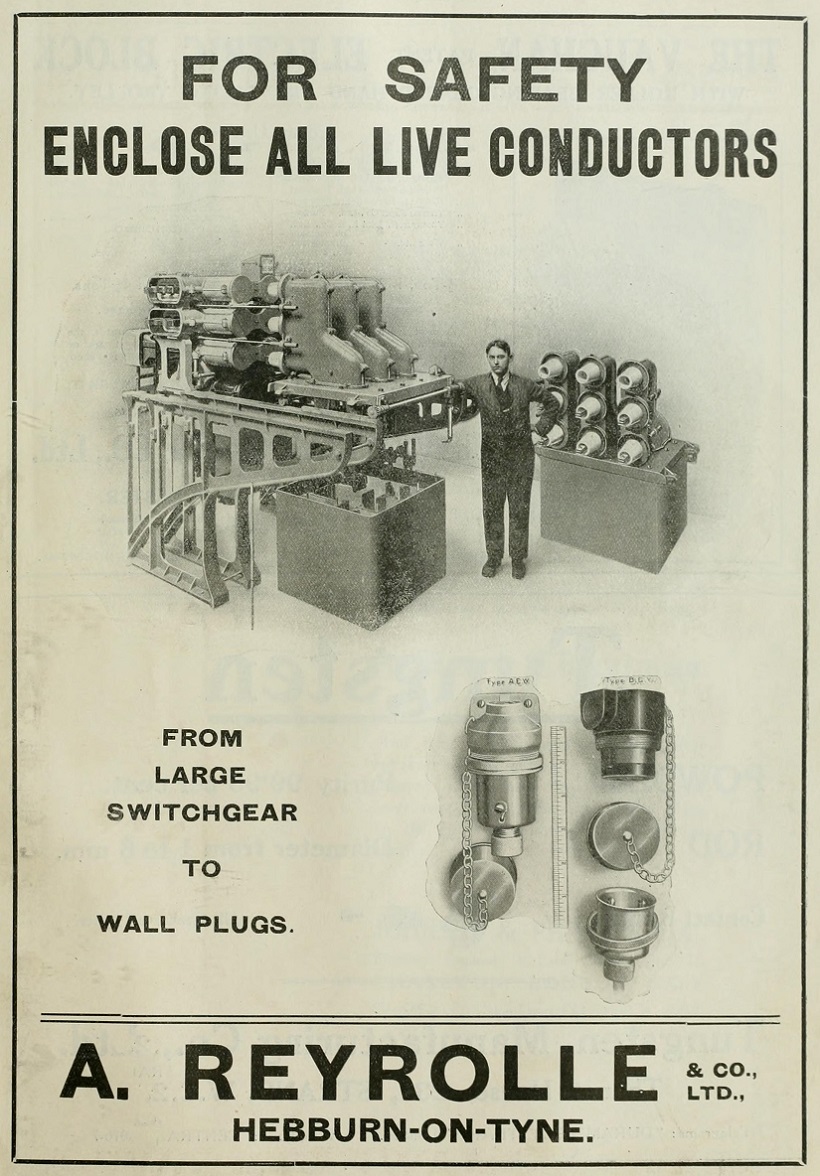 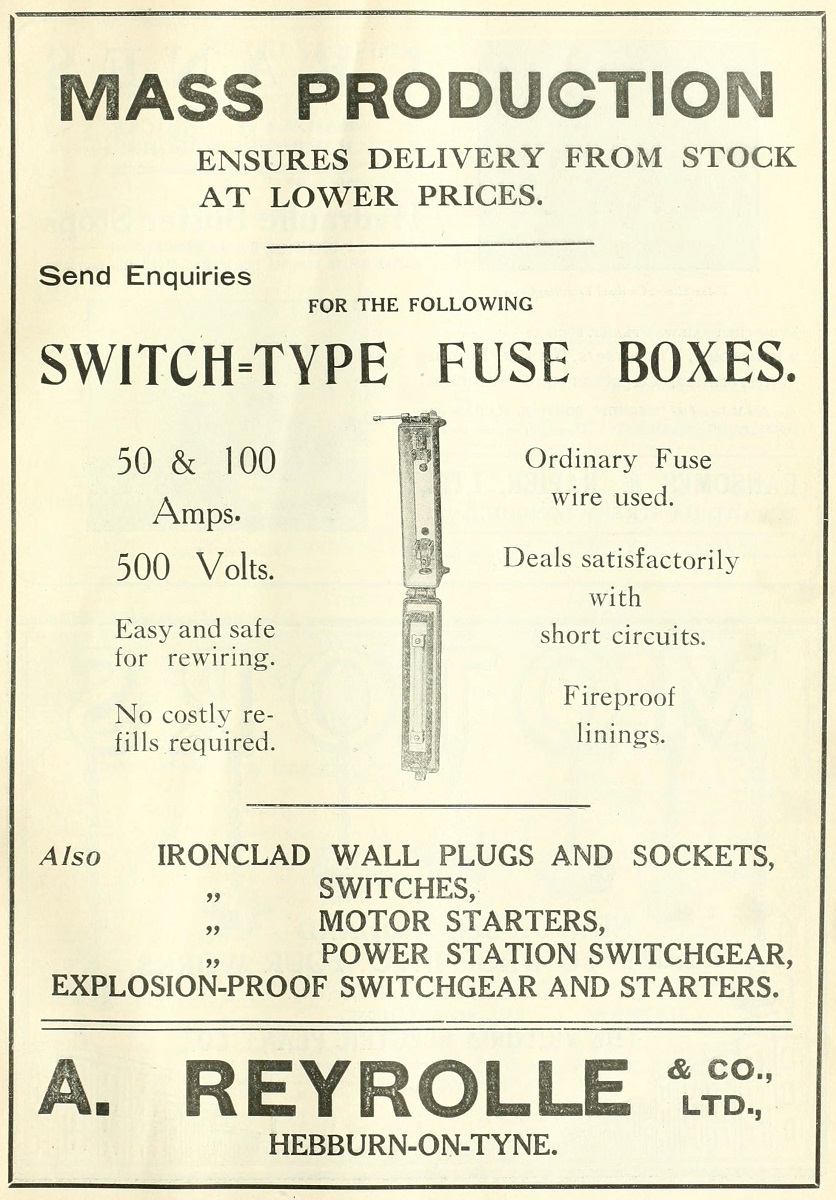 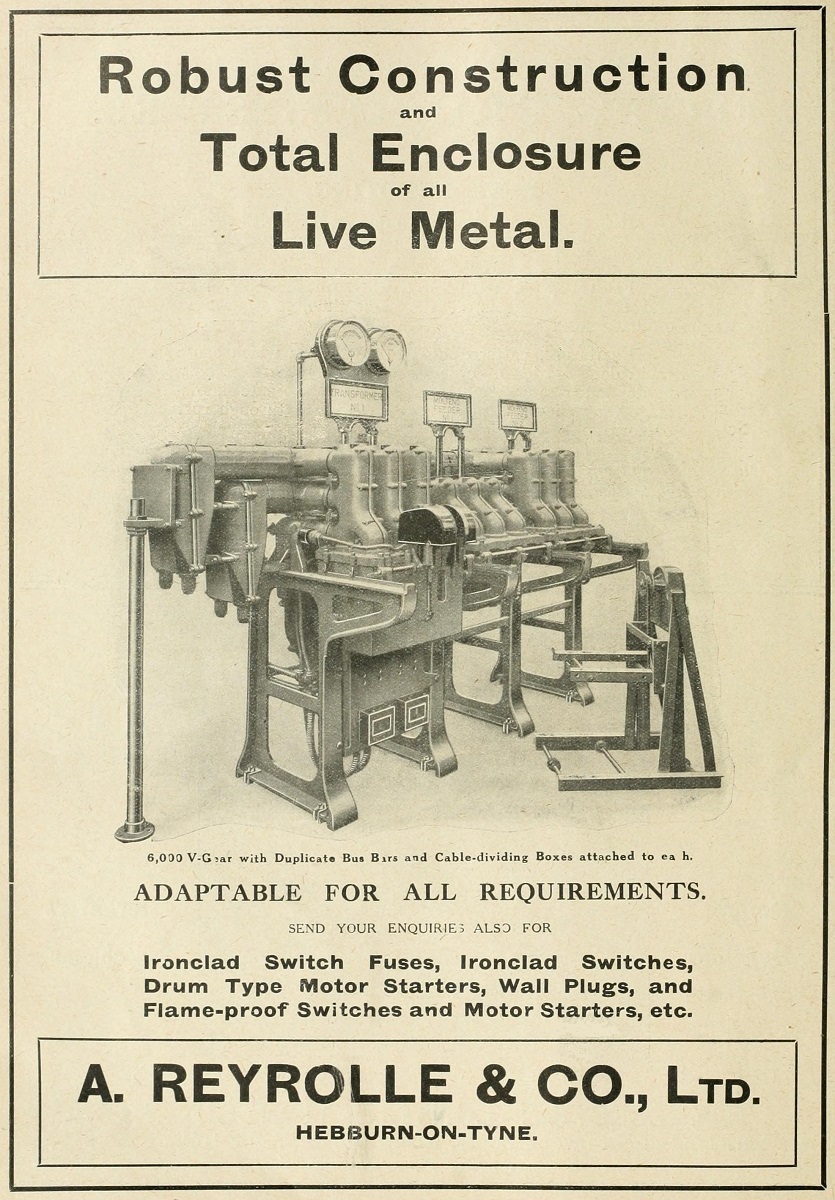 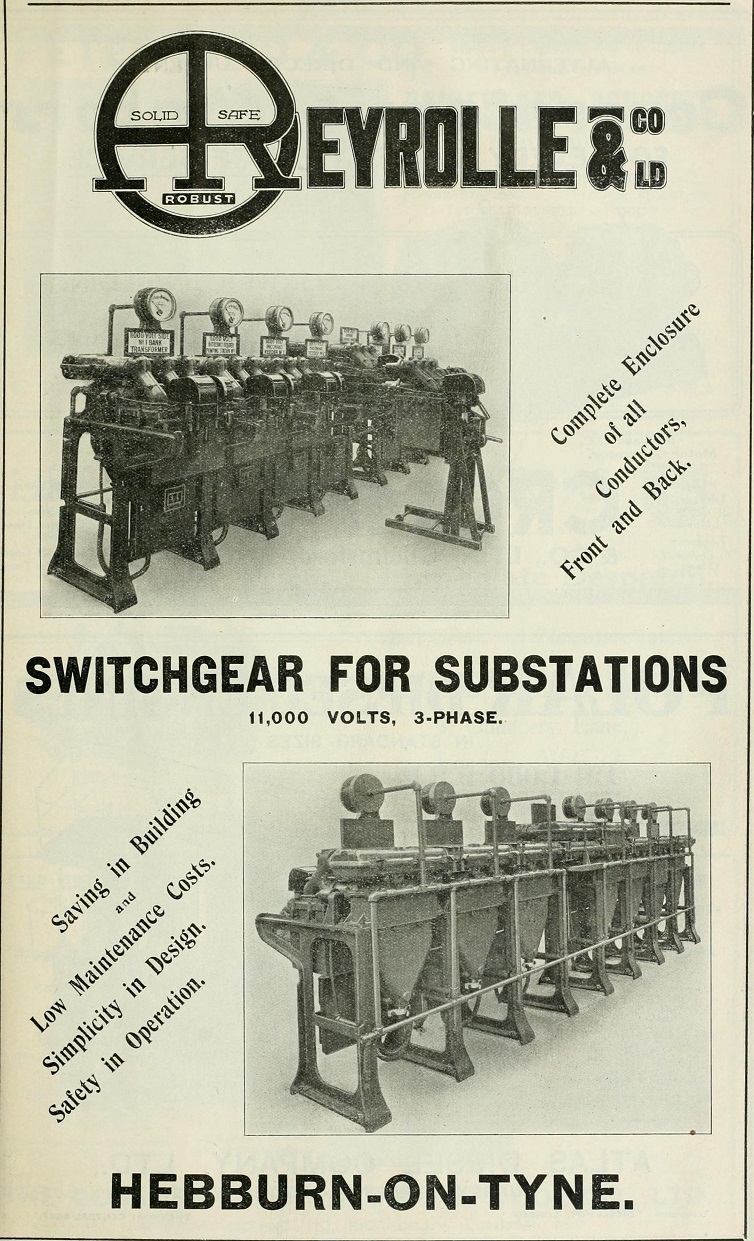 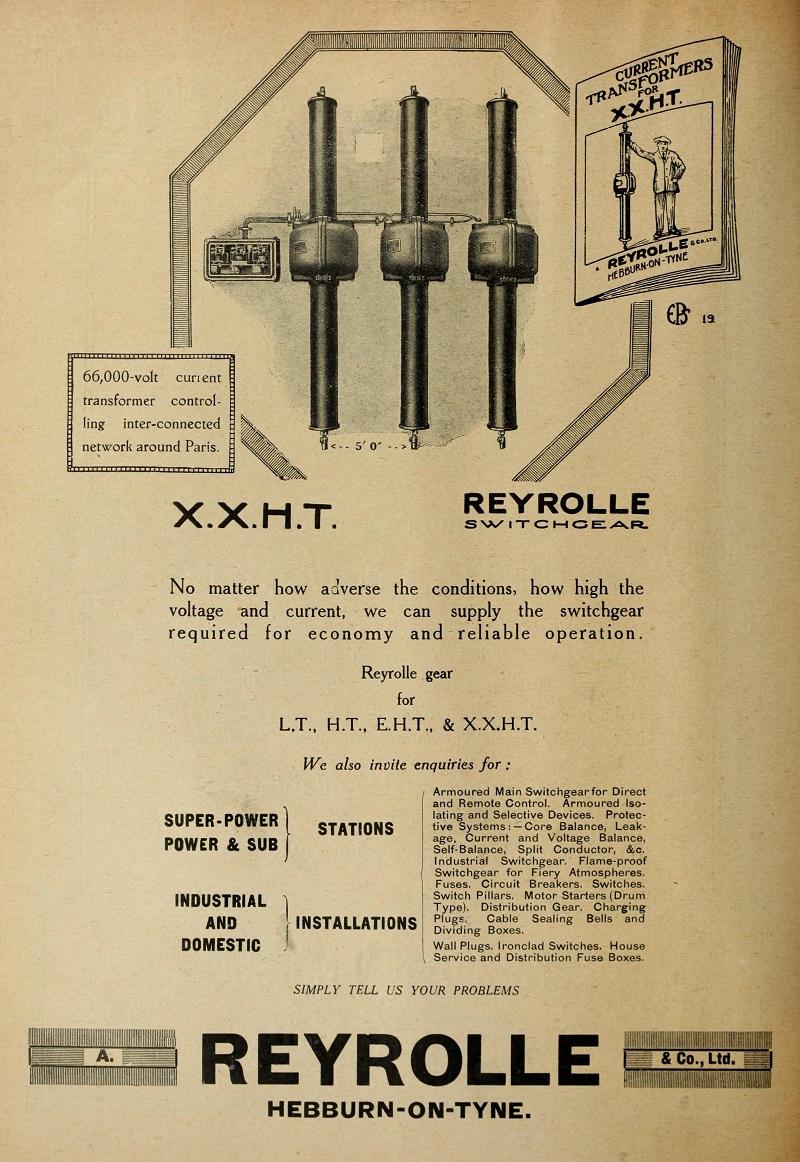 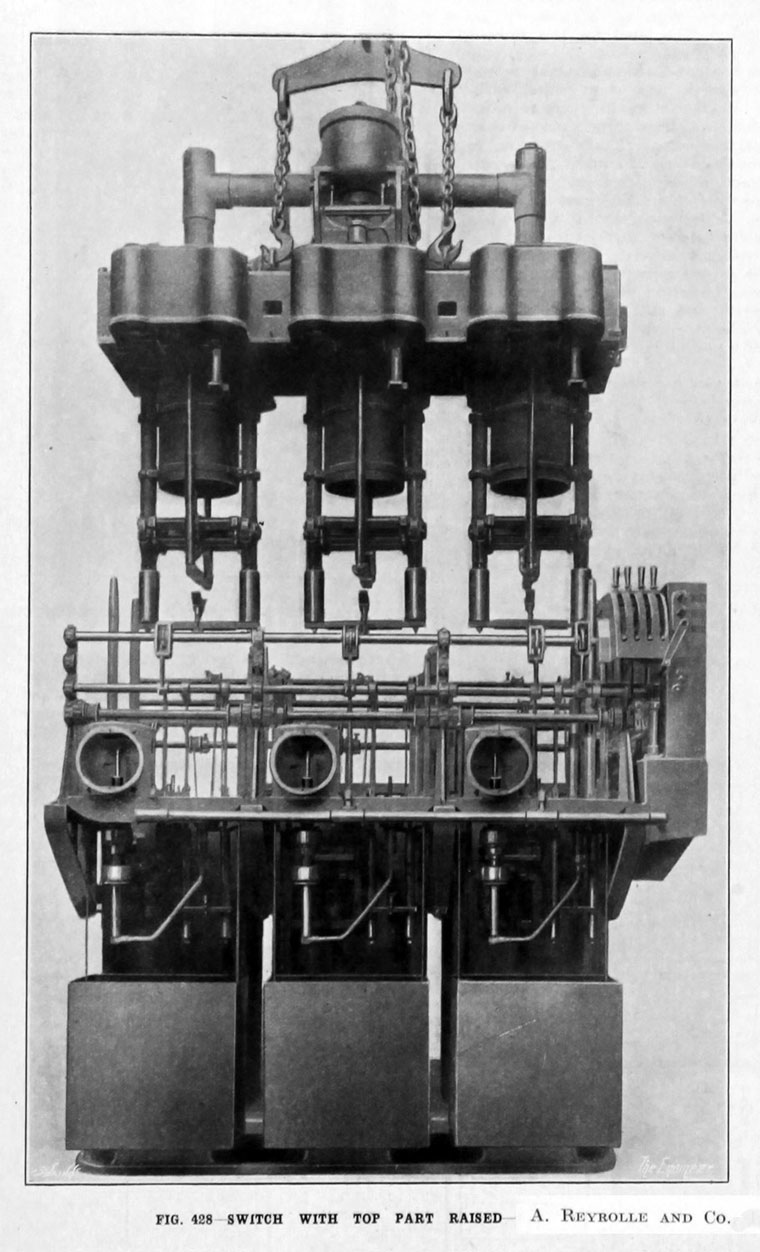 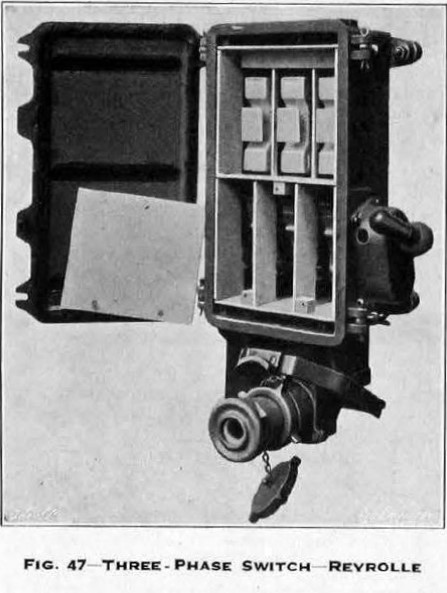 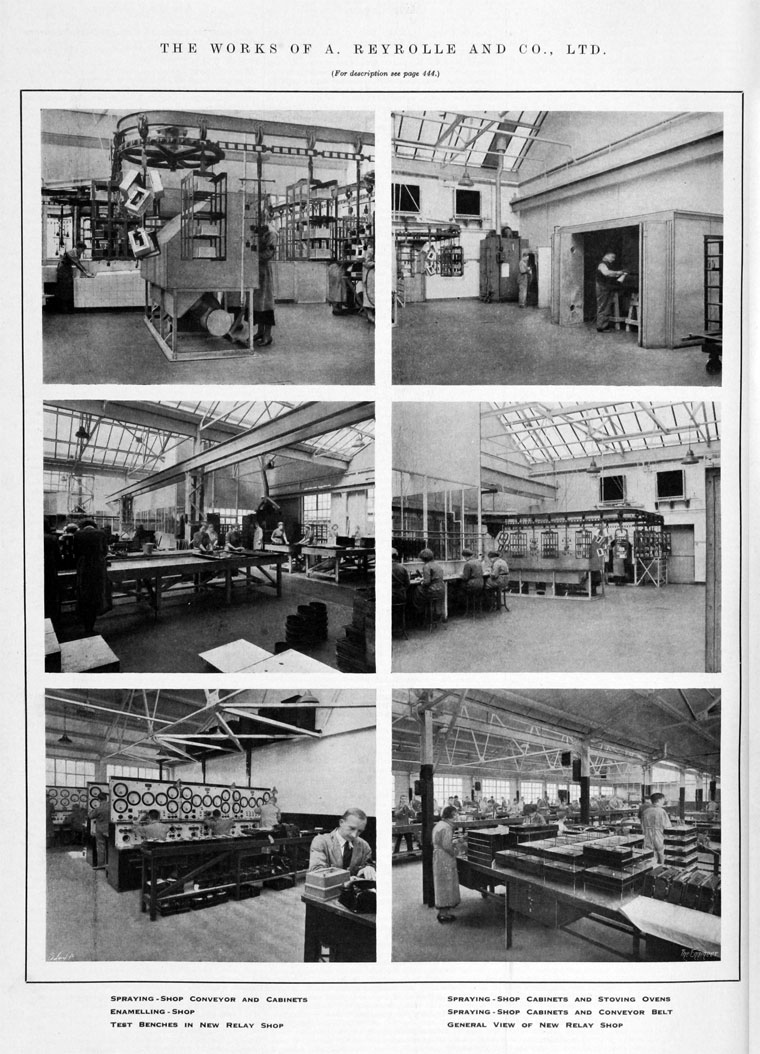 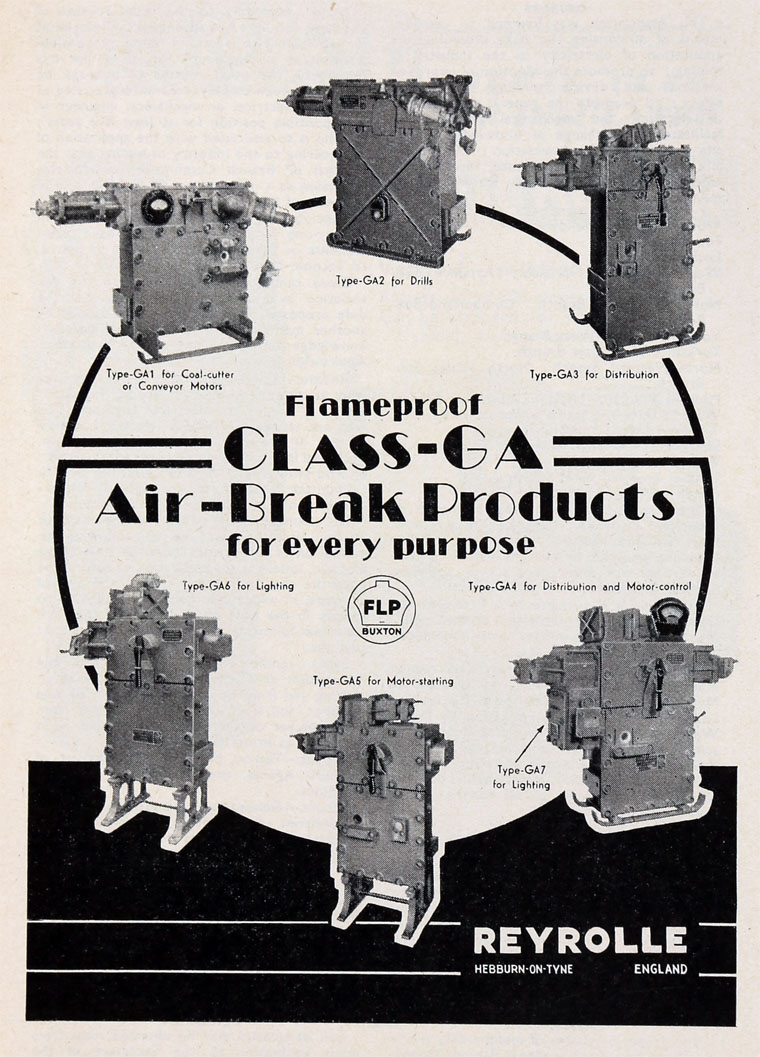 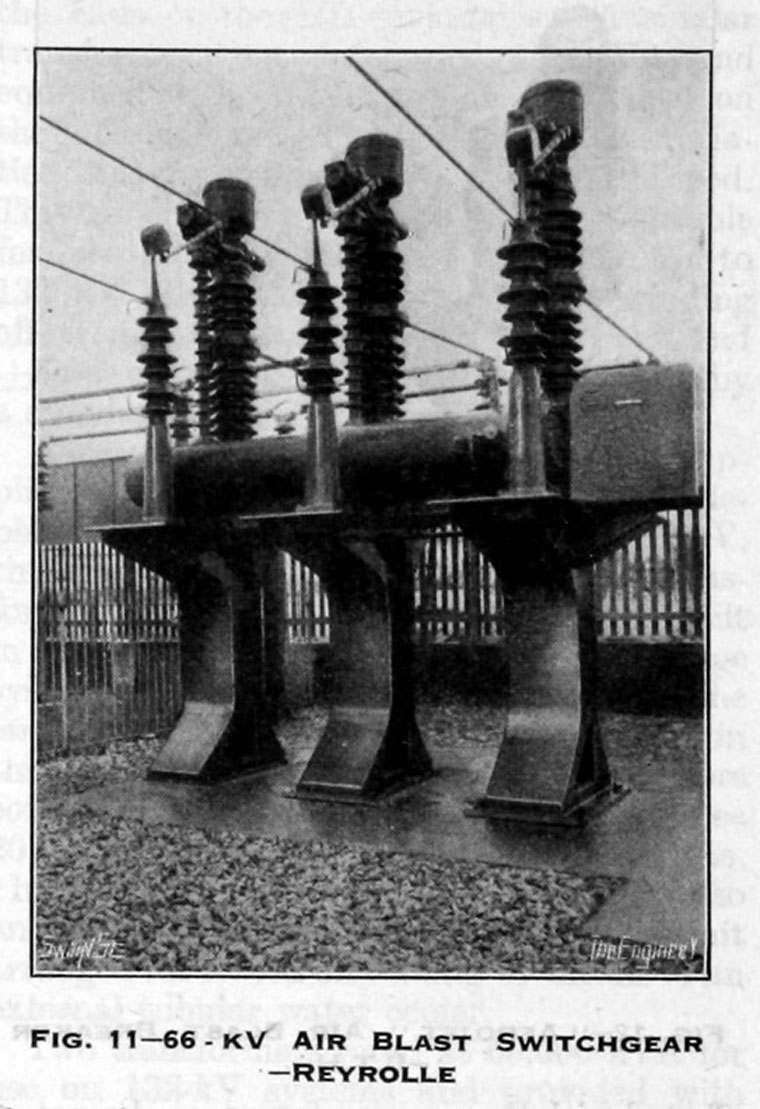 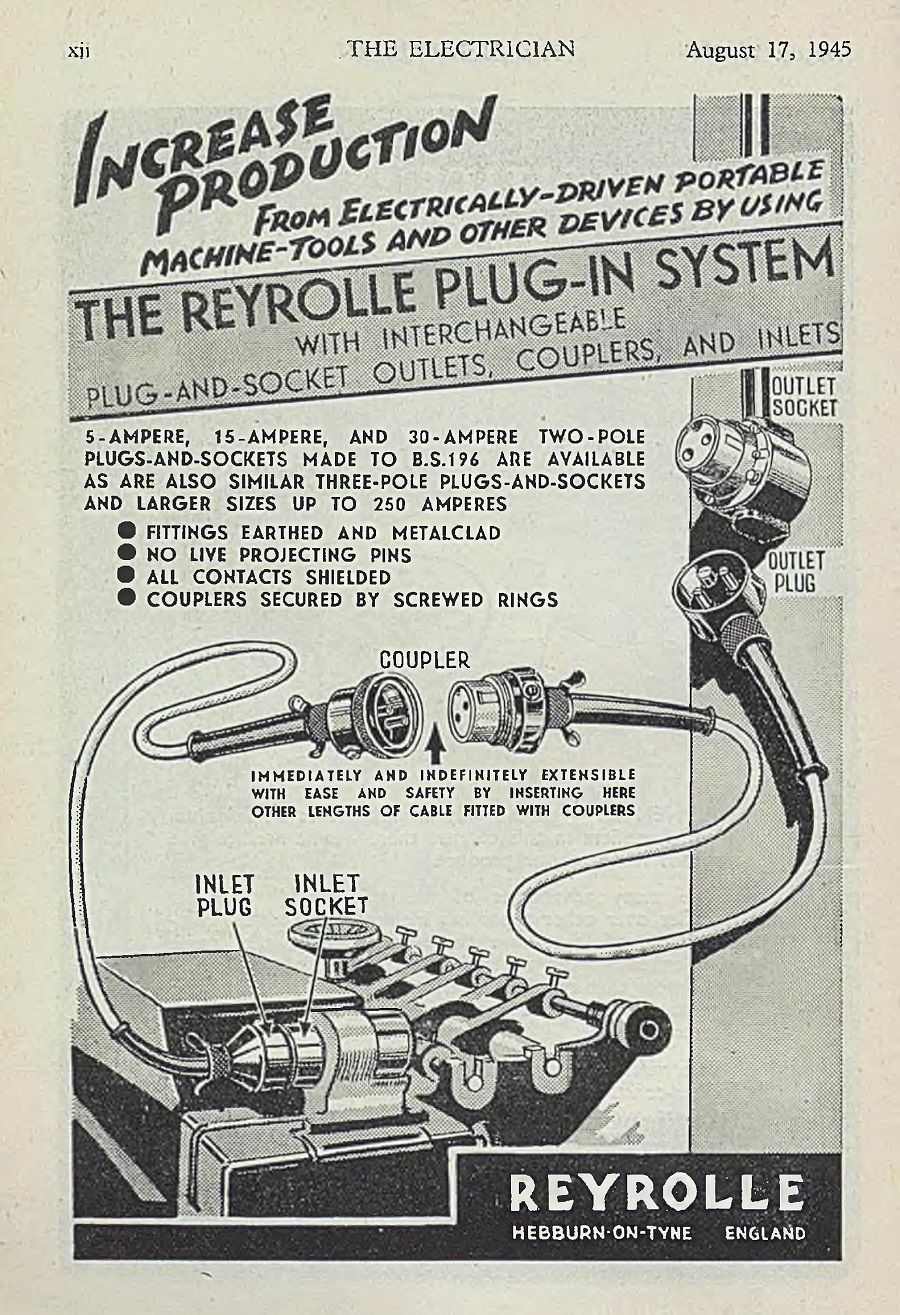 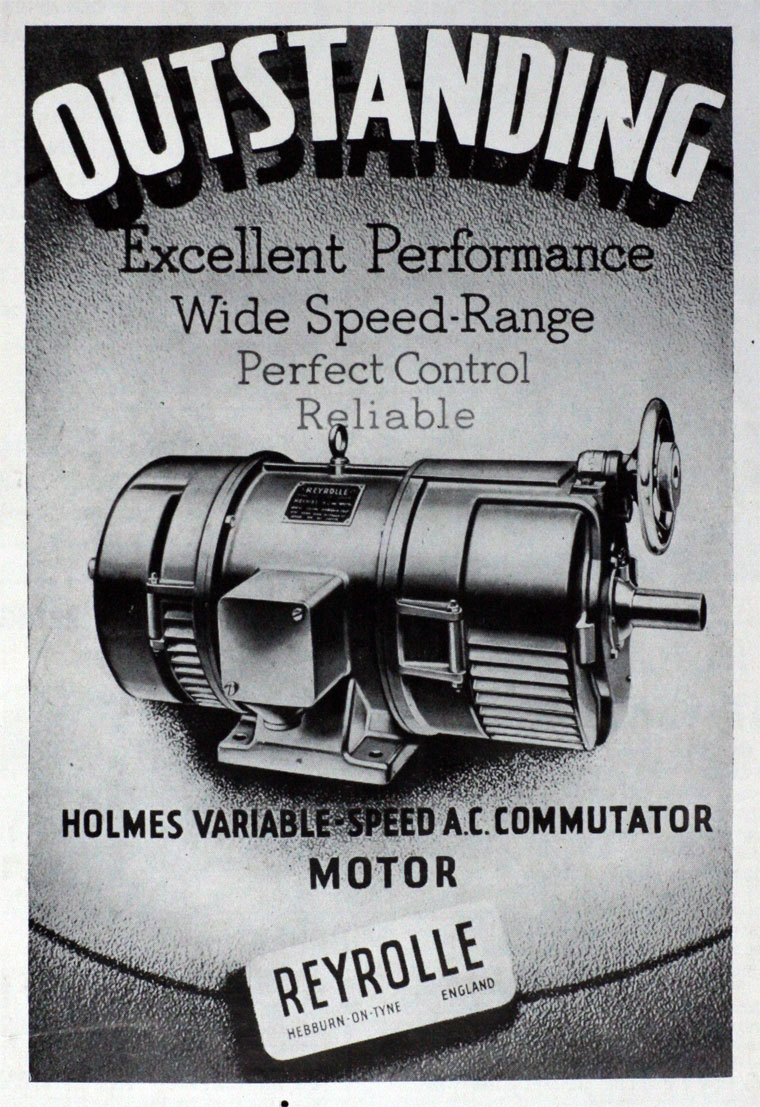 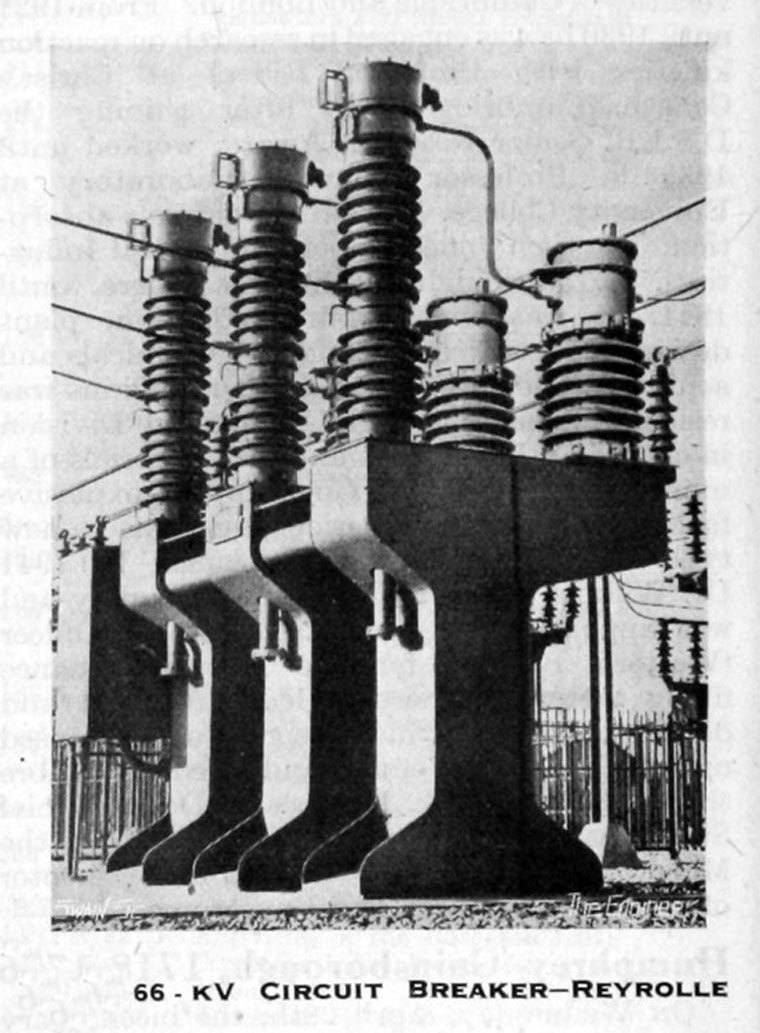 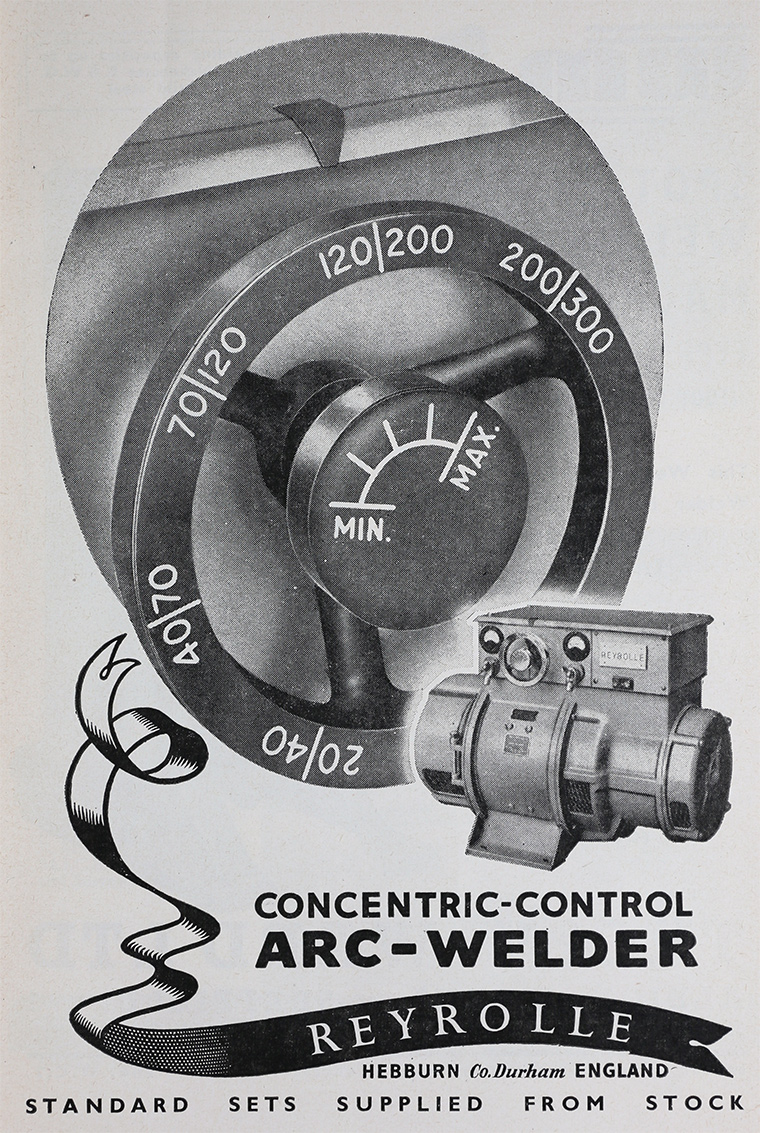 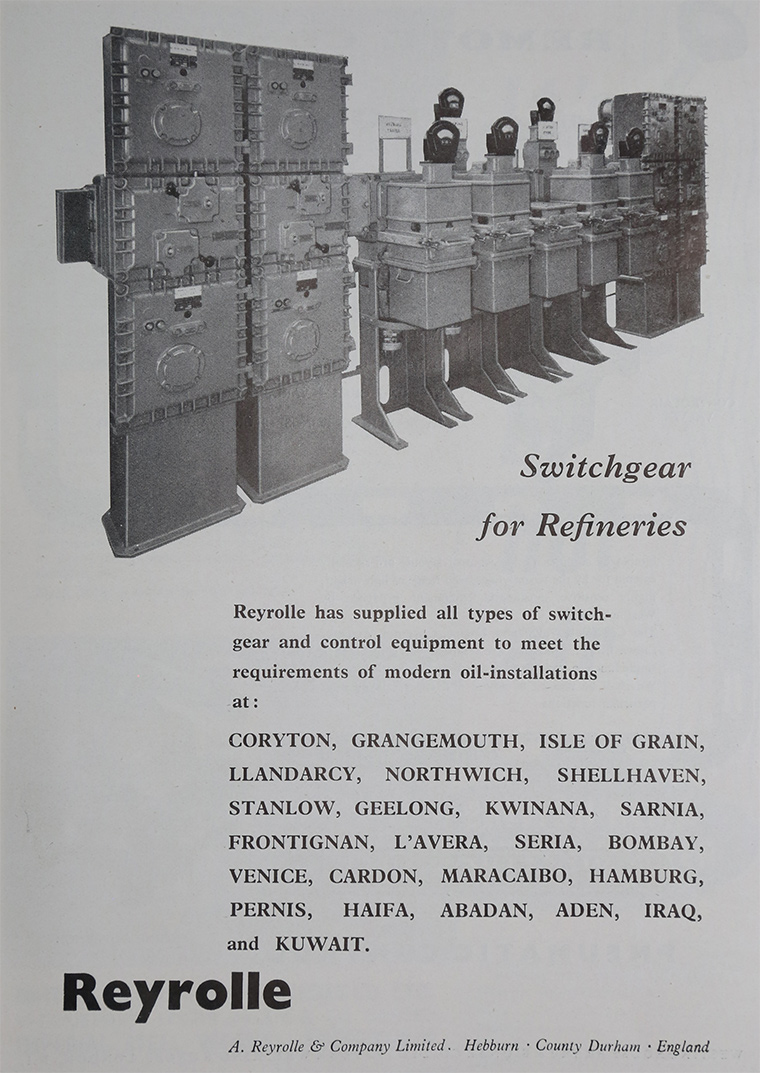 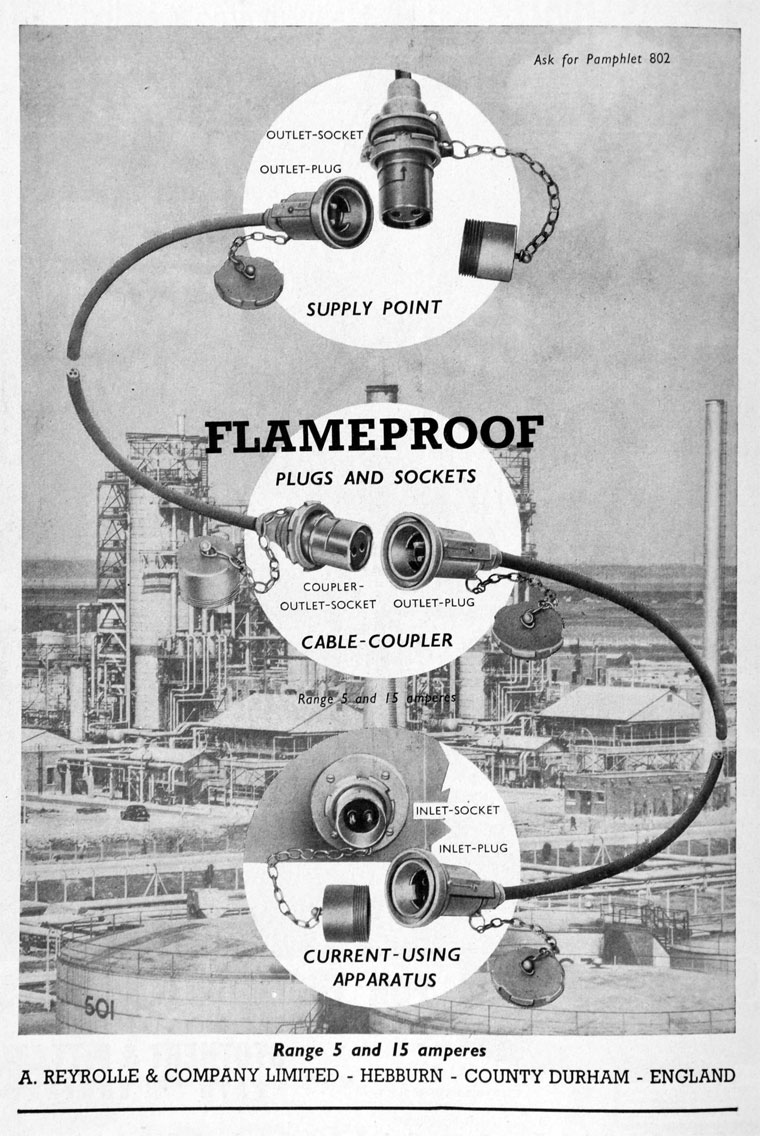 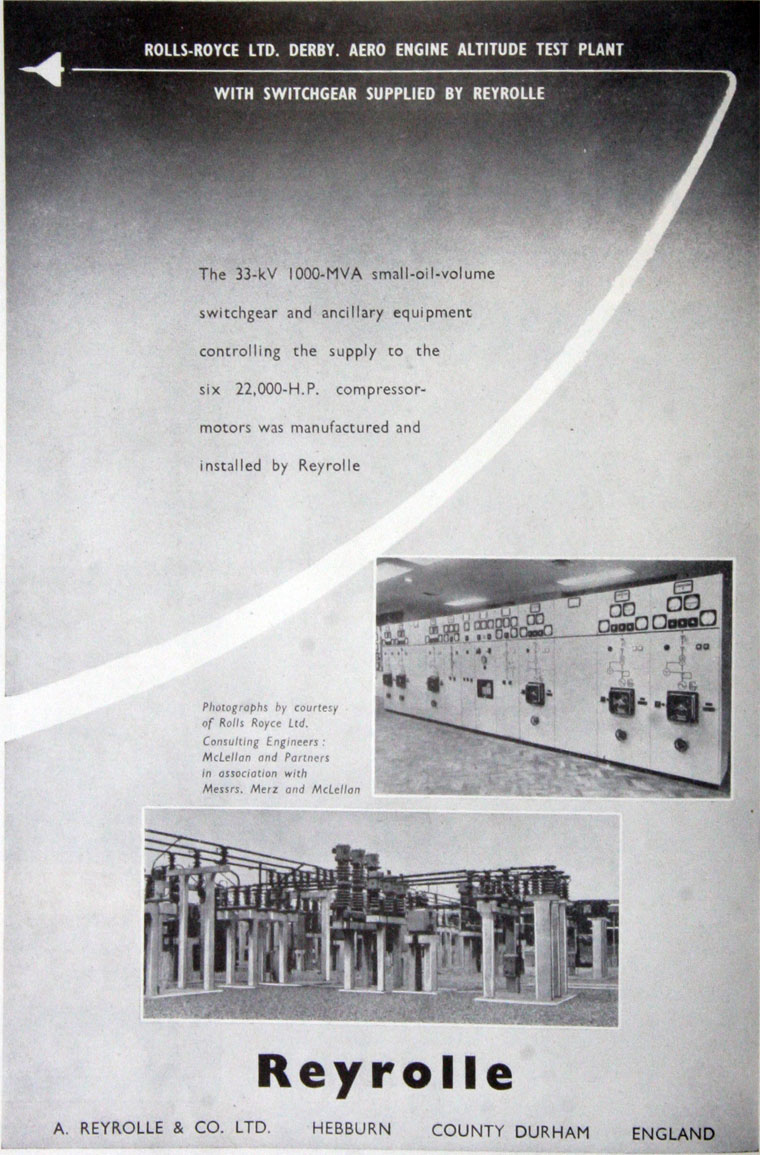 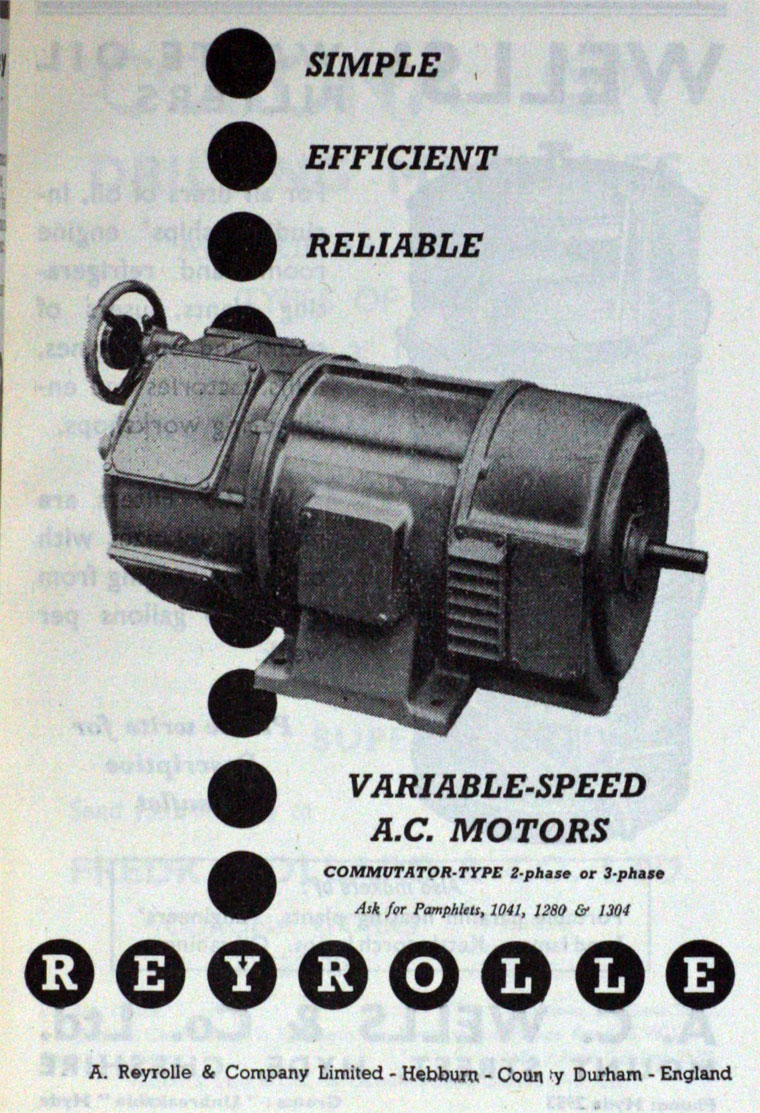 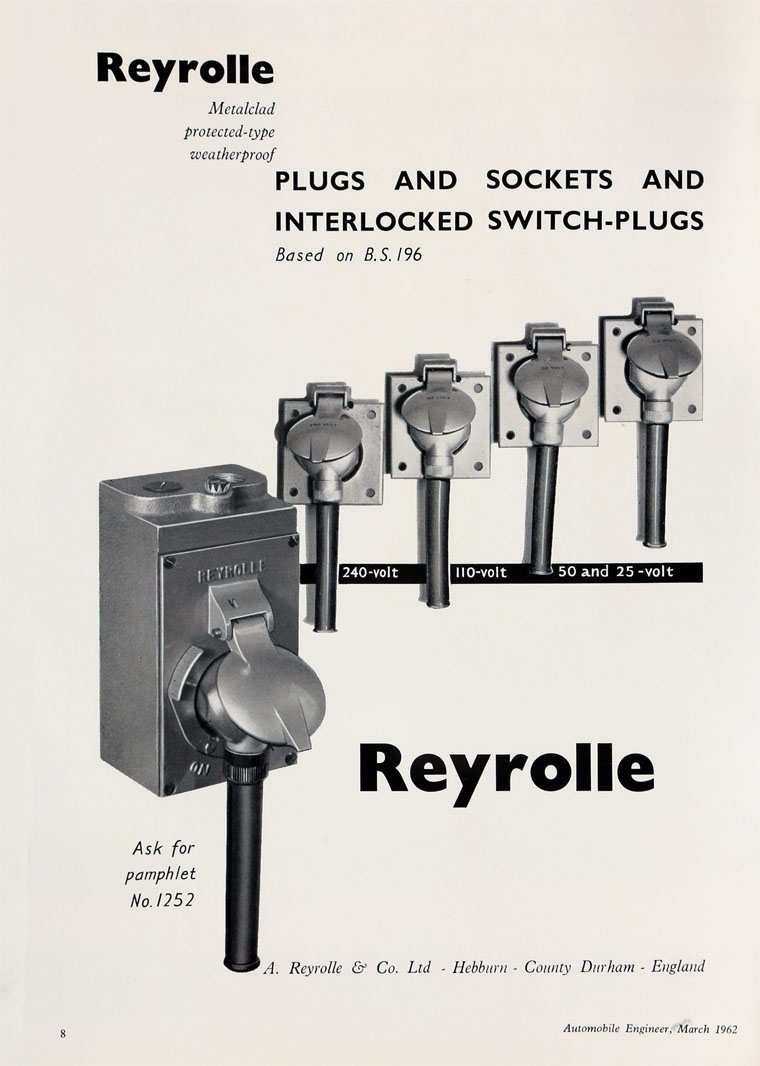 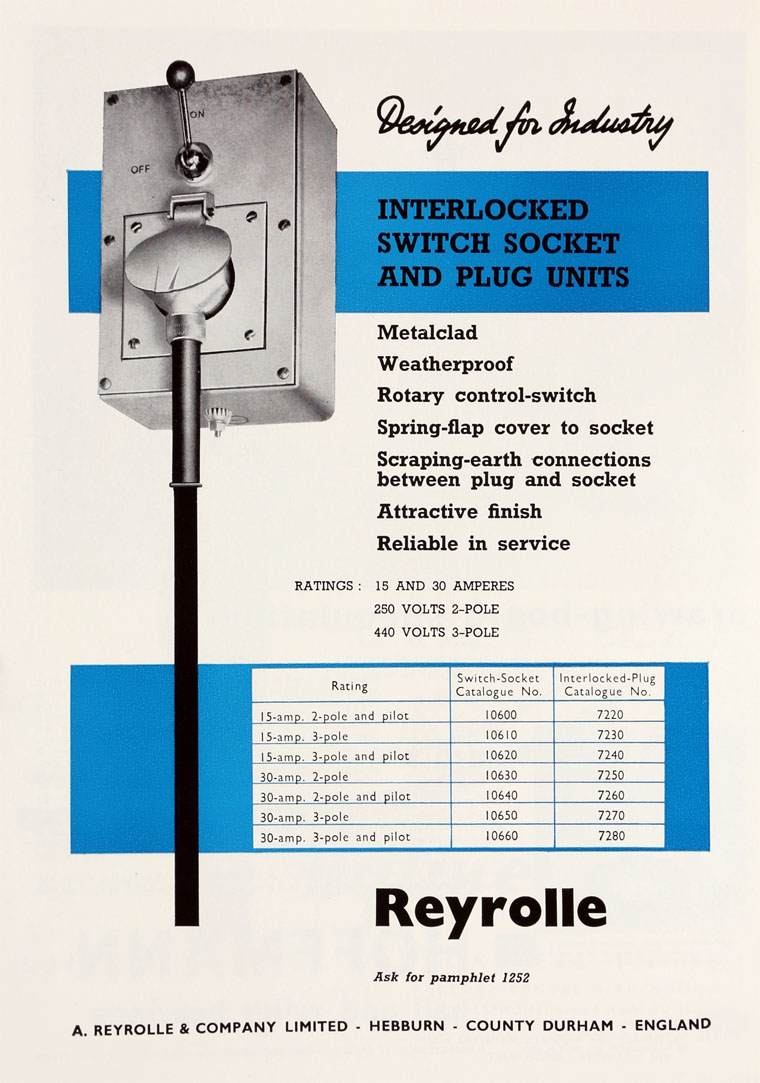 A. Reyrolle and Co of Hebburn-on-Tyne; manufacturer of switchgear and appliances for control of electricity supply.

1886 Alphonse Reyrolle moved to London from France and set up an electrical engineering company.

1901 he moved to Hebburn and founded A. Reyrolle and Company as a public company. The company still occupies the same site today, over 100 years later. Dr J.T. Merz also played a large part in founding the company[1]; his son Norbert was a director for 27 years and chairman for 6 years.

1906 Reyrolle was joined by the world famous Henry William Clothier. Using Reyrolle's sound engineering background and Clothier's genius as a switchgear designer, the company started on the road which made its product a world leader in its field.

1934 A. Reyrolle and Co established Parolle Electrical Plant Co Ltd as a private company for construction of electrical and other plant with the specific aim of acquiring shares in C. A. Parsons and Co from the executors of the estate of the late Sir Charles Parsons. Two directors were appointed by Reyrolle and one by Parsons[7].

1936 4000 employees. Subsidiaries included the Bushing Company (half share), Parolle Electrical Plant Co which had seen increased in demand for its specialised manufactures , J. H. Holmes and Co which business is merged with Reyrolle's, and Eureka Vacuum Cleaner Co[8]

1937 With C. A. Parsons and Co, British Instrument Co, Societe Internationale pour le Reclame Aerienne and J. C. Savage, established Savage and Parsons, a private company, to carry on the business of manufacturers and operators of and dealers in searchlights and projection apparatus, sound locators and detectors, etc[10].

1947 Issue of shares to the public. At this time, Reyrolle's owned 40% of C. A. Parsons and Co, 50% of Parolle Electrical Plant Co, 50% of the the Bushing Company, 30% of Morphy-Richards and 10% of Pyrotenax Ltd. Acquired interest in Heaton Foundry Co Ltd. J. H. Holmes and Co had no assets or liabilities other than a loan to the parent company. 6500 employees[11].

Late 1950s: Jointly C. A. Parsons and Co and A. Reyrolle and Co had the largest shareholding in the Nuclear Power Plant Co Ltd, the first nuclear consortium to be formed in the U.K.[12]. In 1959 they recognised that the number of orders for nuclear power plants would be constrained because each one had such large generating capacity. For this reason, they decided to make a move towards rationalisation by joining with the AEI-John Thompson consortium, forming the Nuclear Power Group. Although this caused some loss of work for the constituent companies it meant that, by 1968, the Group was constructing 6 out of 12 nuclear plant ordered in the U.K., and one of two such plant sold abroad[13].

1961 A. Reyrolle and Co, Ltd parent of six subsidiaries. Based at Hebburn-on-Tyne with branches at Ashington and Newburn-on-Tyne. Employ 8,000 persons. Claim to be the largest manufacturer of switchgear in the world. [15]

1968 Description of their extended works at Hebburn.

1968 A. Reyrolle and Co merged with C. A. Parsons and Co, forming Reyrolle Parsons. [16]. Reyrolle Parsons would be a holding company - the Parsons and Reyrolle subsidiaries would continue to trade under their own names as these are well known in the industry[17]. Reyrolle purchased 37% of Parsons' shares from GEC which, with its existing holding, gave it control, and then offered to buy the other 45% which were in public hands[18].