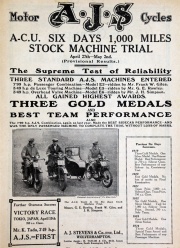 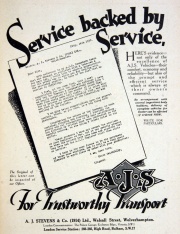 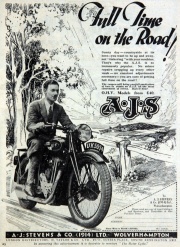 Four of the Stevens brothers acquired freehold premises in Retreat Street, Wolverhampton to produce their own design of motorcycle engines.

1909 The brothers set up a new company called A. J. Stevens & Company Limited on 14th November 1909. The Directors were Harry, Joe junior, Jack and George Stevens. They started with a share capital of £1000.

1914 A new company was incorporated to replace the original company A. J. Stevens and Co (1914) Ltd

1914 Directory lists them as Stevens, A. J., and Co., Retreat Street, Wolverhampton and as motor cycle manufacturers. [1]

WWI: production of munitions as well as continued manufacture of motorcycles. Manufactured track links for tanks.

1914 Directory lists them as Stevens, A. J., and Co., Retreat Street, Wolverhampton and as motor cycle manufacturers. [2]

1915 The range consisted of three models; the sporty 2.75hp single, a medium weight 4hp (550cc) twin and, as top of the range, the 6hp model D with Brampton patent spring forks, three speed counter-shaft gearbox and internal expanding rear brake. A new feature on all 1915 models was the so called AJS 'scientific frame' with straight top tube sloping from head to seat lug, eliminating the use of bent tubes.

1919 The V-twin engine was greatly altered although the gearbox remained unchanged. At the Olympia show a new 6hp model was introduced. Its features included a new type of saddle tank, interchangeable and quickly detachable wheels, specially sprung comfortable saddle, foot-boards with rubber mats, rear stand operated by hand lever and big size aluminium exhaust damper, placed under the front of the engine. Engine capacity was 748cc, bore and stroke 74mmx87mm. It had detachable cylinder-heads, high-tension magneto ignition and a three speed gearbox and was also available in combination form.

1920 AJS took over the Hayward company, maker of sidecars; the firm also returned to the TT where they had 350 cc OHV models and won the Junior race with Cyril Williams at 40.74 mph. during the year the company introduced several innovations, including internal expanding brakes and all-chain drive.

1921 Design improvements and revised engines brought many sporting successes. Most remarkable of those were at the Island TT where they took an impressive 1st, 2nd, 3rd, 4th and 6th, Eric Williams first followed by a resounding win (by a two minute lead) with Howard Raymond Davies in the Senior TT, two days later.

1922 They won the Junior T.T. again with Tom Sheard

1922 Harry Stevens, the company's leading designer, was an enthusiastic radio amateur. Radio (wireless as it was known) was in its infancy; on 27th April, 1922, he organised a public concert and demonstration of radio at the AJS works and broadcast a musical concert from his home radio station on a Sunday morning [3].

1923 Harry anticipated there would be a large demand for wireless receivers (recognising what had happened in the USA) and persuaded the AJS board to manufacture AJS receivers. New buildings were added at Lower Walsall Street for wireless manufacture; the wireless department became known as A.J.S. Wireless and Scientific Instruments. Four models were launched in 1923, all aimed at the top end of the market.

1924 Five new models were released at lower overall prices. But then foreign manufacturers were allowed to sell in the UK which increased competition for British manufacturers and so prices fell. AJS displayed their products at the 1924 Wireless Exhibition. The company also opened its own radio station, broadcasting from Lower Walsall Street Works.

1925 More models were introduced and sales continued to increase; extra space was found at the Stewart Street works for wireless cabinet making. New showrooms and offices were opened at 122-124 Charing Cross Road, London.

1926 Sales fell due to rapid development by competitors so a new range of modern-looking receivers was developed, the Symphony range, but they were still battery-powered. Mass production methods were also introduced.

1927 Sales of radios and cycles were falling. AJS won a contract to produce the Clyno Nine car at Lower Walsall Street Works. As a result the wireless department moved to Stewart Street Works. AJS brought in an overhead, chain-drive camshaft for motorcycles[4].

1927 The first commercial vehicle called the 'Pilot' was produced with a 3.3 litre Coventry Climax engine. It was followed by the 'Commodore'. They built Public Service Vehicles for 3 years to 1931.

1928 The company had problems with trading conditions. AJS then went into the production of commercial vehicle chassis. Radios were rapidly becoming more complex but AJS did not keep up to date with the latest technology, so the decision was made to stop radio production. The Stewart Street works were sold to the Symphony Gramophone and Radio Co. The new company soon began producing radio receivers, radiograms and loudspeakers.

1929 in February Clyno failed and the car contract ended. Development of the AJS Nine car began as a product to plug the gap in work for Lower Walsall Street. By the end of the year sales were still falling, and for the third year in a row the company failed to declare a dividend.

In 1930 a 10% reduction in pay was made throughout the works in an attempt to reduce running costs, and higher priority was given to the car project. An AJS 350 cc machine won the Lightweight TT. The firm now held over 100 world records.

1931 AJS built the S3, an ambitious 496cc transverse-engined touring car with alloy cylinder heads and other advanced design elements; even though times were hard the company still increased its product range.

1931 The company was engulfed by financial problems and was wound up, creditors paid in full and rights sold to Matchless via a take over by AMC. The Stevens' brothers remained owners of the Retreat Street Works and continued as an engineering business. The car business was sold to Willys Overland Crossley but few cars were produced.

1932 The Ever Ready Co bought the Lower Walsall Street Works, which became an important centre for the manufacture of torches. The works became known as Canal Works