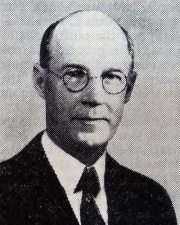 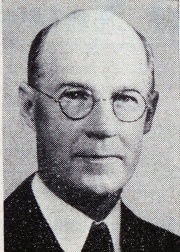 Professor CHRISTIE graduated from the School of Practical Science, Toronto, in 1901, and received the degree of Mechanical Engineer in 1913.

From 1901 to 1904 he was with the Westinghouse Machine Company on work on the early Parsons steam turbine. After spending his college year as Instructor of Mechanical Engineering at Cornell University, he in 1905 joined Allis-Chalmers Company to be in charge of building Parsons steam turbines, and became later assistant superintendent of construction.

In 1907 he went to the Western Canada Cement and Coal Company, and later became their mechanical engineer.

Professor Christie has maintained close contact with industry through his extensive consulting practice, and he has studied engineering developments in Europe (spending the summers of 1927 and 1928 in Great Britain) and in municipally owned public utilities in Western Canada. He has held consultative posts with many important American organizations, and was Advisory Engineer to McClellan and Junkersfeld on their design and construction of large plants using pulverized coal.

Professor Christie has taken an active part with the American Society of Mechanical Engineers, and has been Manager, Vice-President, and President. He was elected an Honorary Member in 1946. He is Chairman of the State Board of Registration for Professional Engineers and Land Surveyors for the State of Maryland. He was elected an Honorary Member of the Institution in 1939, was awarded the honorary degree of Doctor of Engineering at Stevens Institution in 1939, and at the Lehigh University in 1940.

Prof. A. G. Christie, D.E., who died on 24th October was an Honorary Member of this Institution.

After his graduation from the School of Practical Science, Toronto, in 1901, he worked for four years on the early Parsons steam turbine at Westinghouse and also spent a year as Instructor of Mechanical Engineering at Cornell University. During his life Prof. Christie held many consulting posts with several prominent American organizations, including a position as Advisory Engineer to McClellan and Junkersfeld.

Many countries conferred honorary degrees and awards on Professor Christie, including Canada, the U.S.A., Japan and this country, through our Institution which admitted him as an Hon. Member in 1939.

He was particularly well-known for his active interest in engineering education, and will be especially remembered by students of the John Hopkins University of Baltimore, where he was a Professor of Mechanical Engineering for 50 years. This gentle, warm-hearted man was revered by his many students in whom he placed a devotion to learning equal to his own. He will be long remembered by friends and colleagues all over the world.