(Redirected from A. Du Cros)
Jump to: navigation, search 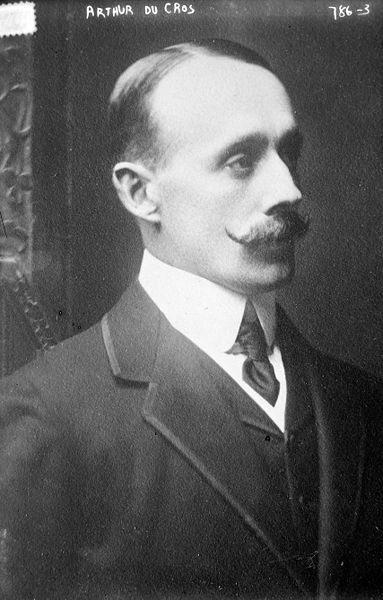 He was born in Dublin, the third of seven sons of William Harvey Du Cros. He was brought up in modest circumstances; his father, later a well-known manufacturer, was at the time only a bookkeeper with an income of £170 a year. He attended a national school in Dublin and then entered the civil service at the lowest grade.

In 1892 he joined the Pneumatic Tyre and Booth's Cycle Agency Ltd, of which his father was now the chairman, and was made a joint managing director in 1896 when it was floated as a public company.

In 1895 he married Maude Gooding, the daughter of a Coventry watch manufacturer; they had two sons and two daughters before a divorce in 1923.

1896 Of Radford House, Coventry. Gentleman. Subscriber to shares in the Dunlop Pneumatic Tyre Co at its formation. [1]

In 1901 he founded the Dunlop Rubber Co, converting 400 acres of land in Birmingham to produce and manufacture tires, with the area henceforth being known as Fort Dunlop. The firm eventually diversified into making other rubber products as well as tires, and du Cros selected plantations in Malaya and Sri Lanka for the company, which by 1917 owned 60,000 acres (24,000 ha) of rubber-producing land.

In 1906 du Cros entered politics, unsuccessfully contesting the seat of Bow & Bromley as a Conservative candidate, a seat his brother was elected to in 1910.

In 1908 he was elected Member of Parliament for Hastings, a position his father had held immediately before.

In 1909 he formed (and was the head of) the Parliamentary Aerial Defence Committee to ensure funding for military aeronautical development, of which he was a strong proponent. During the First World War he worked for the Ministry of Munitions on an honorary basis, buying two motorised ambulance convoys out of his own money and helping raise an infantry battalion, being a former captain of the Royal Warwickshires and for some years being the honorary colonel of the 8th battalion of the Royal Warwickshire Regiment. In 1916 he was created a baronet.

He continued to represent Hastings until 1918, when he was elected as a Member of Parliament for Clapham, a position he resigned 4 years later.

His later career was awash with financial impropriety. He found it difficult to distinguish between personal and company assets, using company funds to sponsor family investments and appointing family members to senior position with no regard for merit. He also participated in financial manipulation, being a close associate of James White, a financial expert who specialised in share rigging and whose actions left Dunlop close to collapse in 1921. du Cros had already lost influence within the company and was quietly removed after the 1921 crash.

1935 Public examination of his affirs by the bankruptcy Court. [4]