Grace's Guide is the leading source of historical information on industry and manufacturing in Britain. This web publication contains 146,010 pages of information and 231,555 images on early companies, their products and the people who designed and built them.

1953 Who's Who in the Motor Industry: Persons L 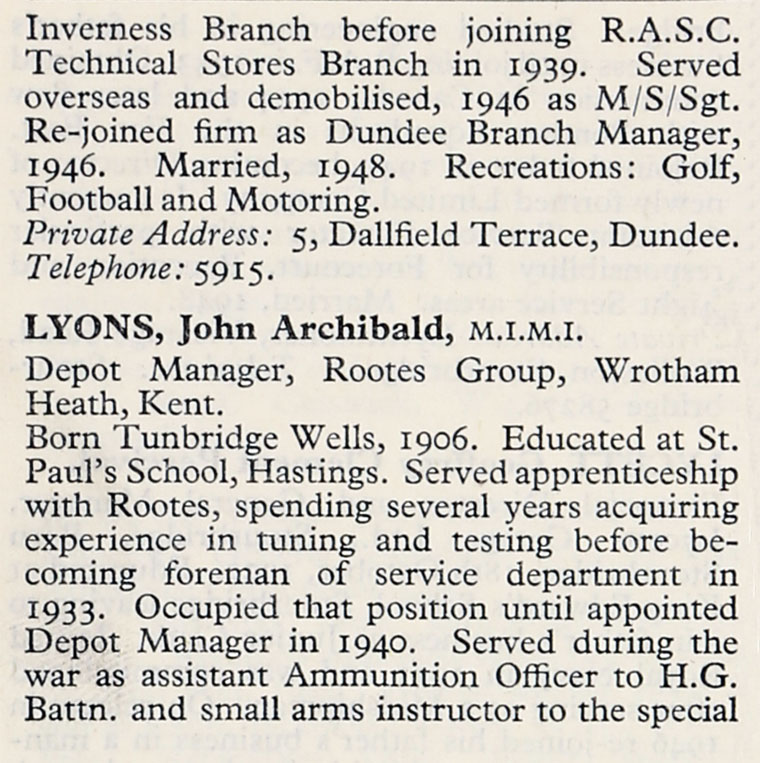 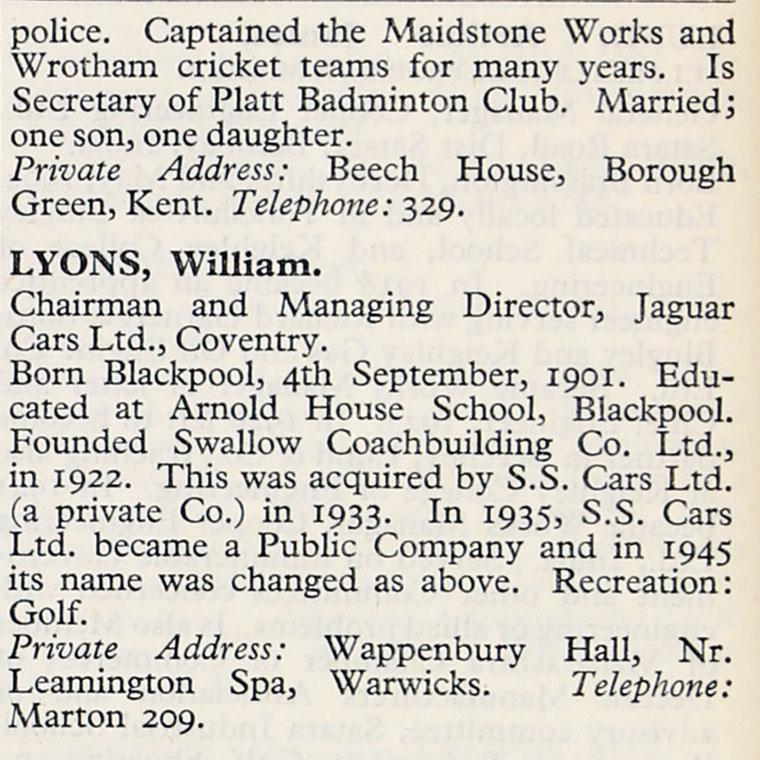 Note: This is a sub-section of 1953 Who's Who in the Motor Industry

LANCHESTER, Frank, C.I.MECH.E. Director, Lanchester Motor Company Ltd., Coventry (a subsidiary and owned by the Birmingham Small Arms Company) also associated as Consultant to The Daimler Company Ltd. Born Hove, 22nd July, 1870. Third son of H. J. Lanchester, F.R.I.B.A. Educated at private school in Brighton. Joined staff of London Bank, prior to entering Engineering Industry with his elder brothers. In 1899 formed, with F. W. and G. H. Lanchester, The Lanchester Motor Company and acted as Business Manager and Sales Director in London for 25 years. Founded the Midland Automobile Club, Birmingham in 1901 and acted as its first Honorary Secretary. Has been a committee member of S.M.M. & T. since 1903 (Vice-Chairman and President 1919-20). Honorary Treasurer of the Motor Legislation Committee, 1920-27. Has been thrice President of the Bureau Permanent des Constructeurs d'Automobiles of which he was Delegate and British Representative 1912-36. On Committee of R.A.C. since 1920 and Vice-Chairman for three years. President of B.M.T.A., 1931-34, and re-elected to that position from 1941 to 1945. President of the Fellowship of the Motor Industry 1942/45. Is still actively engaged in the Company's business and the Motoring Industry's many trade Organisations. Recreation: Serving on Trade Organisations relating to the sport of Motoring in an honorary capacity. Private Address: 17, Beauchamp Avenue, Leamington Spa.

LEEK, James, C.B.E. Director and General Manager (Parent Company), and Managing Director (Subsidiary Companies of Small Heath Group), The Birmingham Small Arms Co., Ltd. Born •Lancaster, 12th September, 1892. Educated at Newport Grammar School. Started as pupil with The Daimler Motor Co. Ltd., Coventry, and except for a brief period with Wolseley Motors during the first world war, has always been in the B.S.A./Daimler Group. Experienced in all phases of the production side of the Industry. Takes great interest in the social and recreational activities of the firm's workers and attends all functions and meetings whenever possible. Also interested in the A.T.C. and the Birmingham Chamber of Commerce. Recreations : Golf and Motoring. Private Address: " Brook End," Henley-in-Arden, Warwickshire. Telephone: 48.

LEES, Philip Newark, F.I.M.I. Managing Director, Marlboro' Garage (Manchester) Ltd., Manchester, 1. Born Cheadle Hulme, 3oth June, 1903. Educated at Bowden College, Cheshire. Served training period with G. Dugdale & Co. Ltd. of Manchester and London, after six years was appointed Sales Manager and on retirement of 2 Directors took over assets and goodwill and established present Company in 1931. Since 1944 has been actively engaged in the affairs of the Institute of the Motor Industry (Divisional Chairman 1945-47. Councillor and member of Management Committee since 1944). Member of the Council and Chairman of E. Lancs. Div. of M.A.A. Married; one son, one daughter. Recreations: Golf, Sailing and Gardening. Private Address: Arkley, Ack Lance, Bramhall, Cheshire. Telephone: 600.

LIGHT, Harry Wilfrid. Director and General Manager, Thrupp and Maberly Ltd., Cricklewood, N.W.2. Born Addlestone, 8th September, 1907. Educated privately. Commenced business at Vickers, Weybridge in 1924, and in 1928 entered the Motor Industry joining Weymann Motor Bodies (1925) Ltd., at Addlestone. In 1932 joined the Rootes Group at their Thrupp and Maberly Coachbuilding factory as Production Manager and subsequently Commercial Manager. In 1944 was appointed General Manager and was elected a Director in 1946. Is a Committee Member of the Car Body Builders Group of the S.M.M. & T. Member of the Council and Honorary Treasurer of the Institute of British Carriage and Automobile t", Manufacturers, and Vice President of the Rootes Social and Athletic Club (London Division). Club : Eccentric. Married 1934; one son. Recreations : Shooting and Gardening. Private Address: Dell Cottage, Brox Lane, Ottershaw, Nr. Chertsey. Telephone: Ottershaw 259.

LIMBREY, Geoffrey Herbert. Assistant Chief Engineer, Rover Company Ltd., Acocks Green, Birmingham. Born Wembley, 13th December, 1913. Educated at Haberdashers' Aske's Hampstead School. Studied engineering at London Polytechnic and at Rugby College of Technology and Arts. Served two years apprenticeship with English Electric Co., Ltd., Rugby. Was for eleven years with that Company as design assistant on heavy diesel plant. Joined Rover Co. and became responsible for design, research and development of the Rover Meteor engines and later was responsible for the design of the Rover Meteorite petrol and diesel engines. These Meteorite diesels made possible the production of the first of the giant vehicles to be made in England—the "Antar " produced by Thornycroft. Married : One son. Recreations : Motoring and Yachting. Private Address: Manor House Lane, South Yardley, Birmingham. Telephone: Sheldon 3104.

LITTLEFORD, Beatrice May. Managing Director, Albany Road Garage, 52, Darlington Street, Wolverhampton. Born Wolverhampton, 1892. Educated at " The Larches," Wolverhampton. Has been connected with the Motor Industry most of her life, starting with the late Major Bernard P. Littleford in 1925 and working with him until his death in 1951. Since then with the help of her only son—a solicitor—has carried on the business. Is also interested in Property management. As a " side-line " represents Staffordshire on the Council of " The English Bridge Union " and has played for that county. Probably the first woman in Gt. Britain to be Chairman of County Bridge. Other recreations : Golf and Gardening. Private Address: 62, Tettenhall Road, Wolverhampton. Telephone: 22490.

LLOYD, Frederick Roland. Governing Director, Fred Lloyd Motors, Ltd. Grimsby. Born Cleethorpes, 2I St January, 1904. Educated at St. James Secondary School, Grimsby, and received technical training from private tutor. After serving apprenticeship with Fred Lloyd he became Managing Director of Fred Lloyd Motors Ltd. in 1924, and Governing Director when company was reconstituted in 1947. Made special study of light cars, and after designing the first Lloyd car in 1934, he formed, in the same year, the firm of Lloyd Cars Ltd., of which he became Governing and Managing Director. During the second world war he carried out many important contracts for the Ministry of Aircraft Production and aero engine manufacturers. Post war activities have been concerned with the design and production of the Lloyd " 650 " light car. Interested in Music, Sailing and Fishing. Private Address: 309, Laceby Road, Grimsby. Telephone: 7318.