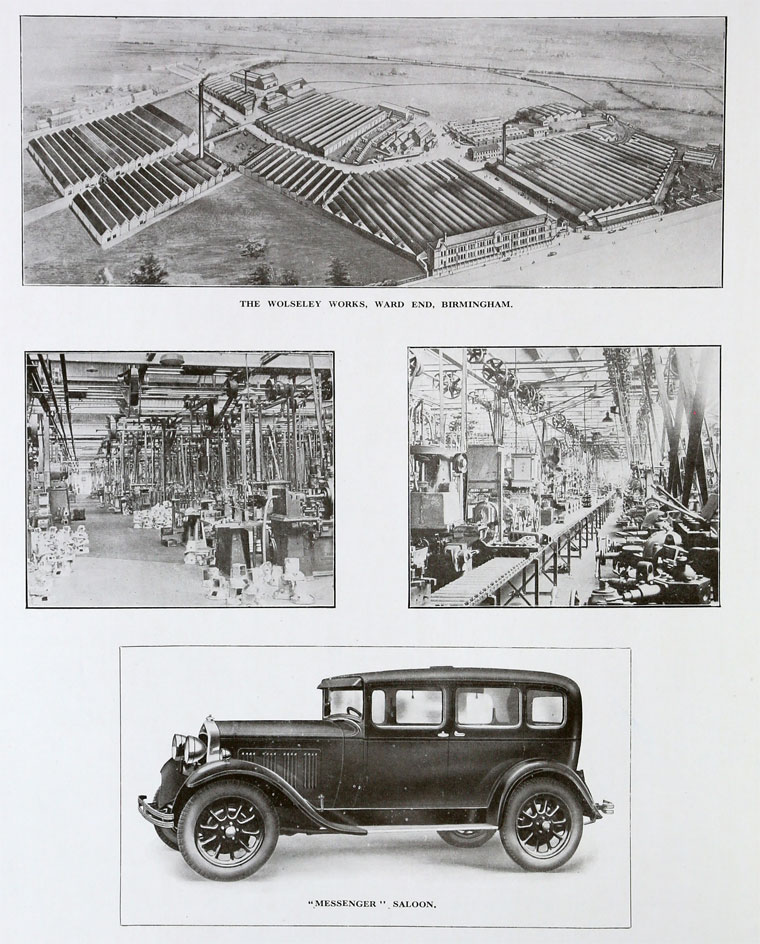 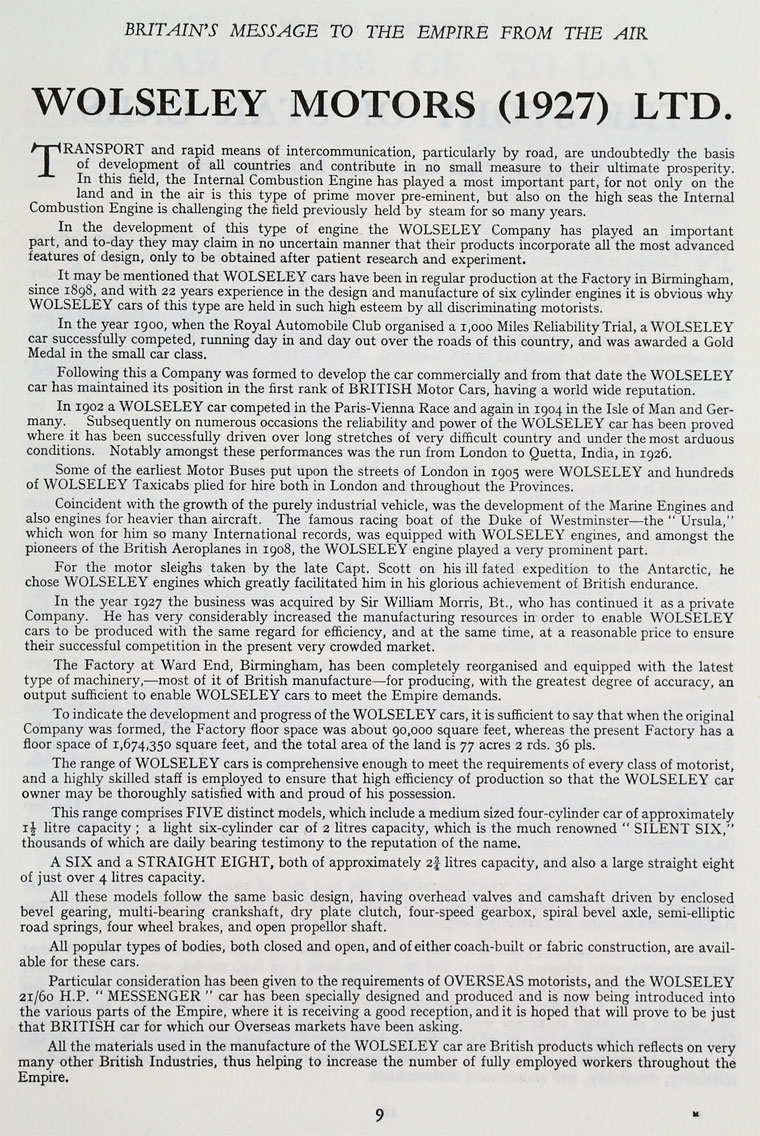 .....the Internal Combustion Engine is challenging the field previously held by steam for so many years.

In the development of this type of engine the WOLSELEY Company has played an important part, and to-day they may claim in no uncertain manner that their products incorporate all the most advanced features of design, only to be obtained after patient research and experiment.

It may be mentioned that WOLSELEY cars have been in regular production at the Factory in Birmingham, since 1898, and with 22 years experience in the design and manufacture of six cylinder engines it is obvious why WOLSELEY cars of this type are held in such high esteem by all discriminating motorists.

In the year 1900, when the Royal Automobile Club organised a 1,000 Miles Reliability Trial, a WOLSELEY car successfully competed, running day in and day out over the roads of this country, and was awarded a Gold Medal in the small car class.

Following this a Company was formed to develop the car commercially and from that date the WOLSELEY car has maintained its position in the first rank of BRITISH Motor Cars, having a world wide reputation.

In 1902 a WOLSELEY car competed in the Paris-Vienna Race and again in r9o4 in the Isle of Man and Germany. Subsequently on numerous occasions the reliability and power of the WOLSELEY car has been proved where it has been successfully driven over long stretches of very difficult country and under the most arduous conditions. Notably amongst these performances was the run from London to Quetta, India, in 1926.

Some of the earliest Motor Buses put upon the streets of London in 1905 were WOLSELEY and hundreds of WOLSELEY Taxicabs plied for hire both in London and throughout the Provinces.

Coincident with the growth of the purely industrial vehicle, was the development of the Marine Engines and also engines for heavier than aircraft. The famous racing boat of the Duke of Westminster - the "Ursula," which won for him so many International records, was equipped with WOLSELEY engines, and amongst the pioneers of the British Aeroplanes in 1908, the WOLSELEY engine played a very prominent part.

For the motor sleighs taken by the late Capt. Scott on his ill fated expedition to the Antarctic, he chose WOLSELEY engines which greatly facilitated him in his glorious achievement of British endurance.

In the year 1927 the business was acquired by Sir William Morris, Bt., who has continued it as a private Company. He has very considerably increased the manufacturing resources in order to enable WOLSELEY cars to be produced with the same regard for efficiency, and at the same time, at a reasonable price to ensure their successful competition in the present very crowded market.

The Factory at Ward End, Birmingham, has been completely reorganised and equipped with the latest type of machinery, - most of it of British manufacture - for producing, with the greatest degree of accuracy, an output sufficient to enable WOLSELEY cars to meet the Empire demands.

To indicate the development and progress of the WOLSELEY cars, it is sufficient to say that when the origin. Company was formed, the Factory floor space was about 90,000 square feet, whereas the present Factory has a floor space of 1,674,350 square feet, and the total area of the land is 77 acres 2 rds. 36 pls.

The range of WOLSELEY cars is comprehensive enough to meet the requirements of every class of motorist, and a highly skilled staff is employed to ensure that high efficiency of production so that the WOLSELEY car owner may be thoroughly satisfied with and proud of his possession.

This range comprises FIVE distinct models, which include a medium sized four-cylinder car of approximately II litre capacity a light six-cylinder car of 2 litres capacity, which is the much renowned "SILENT SIX," thousands of which are daily bearing testimony to the reputation of the name.

All popular types of bodies, both closed and open, and of either coach-built or fabric construction, are available for these cars.

Particular consideration has been given to the requirements of OVERSEAS motorists, and the WOLSELEY 21/60 H.P. "MESSENGER" car has been specially designed and produced and is now being introduced into the various parts of the Empire, where it is receiving a good reception, and it is hoped that will prove to be just that BRITISH car for which our Overseas markets have been asking.

All the materials used in the manufacture of the WOLSELEY car are British products which reflects on very many other British Industries, thus helping to increase the number of fully employed workers throughout the Empire.