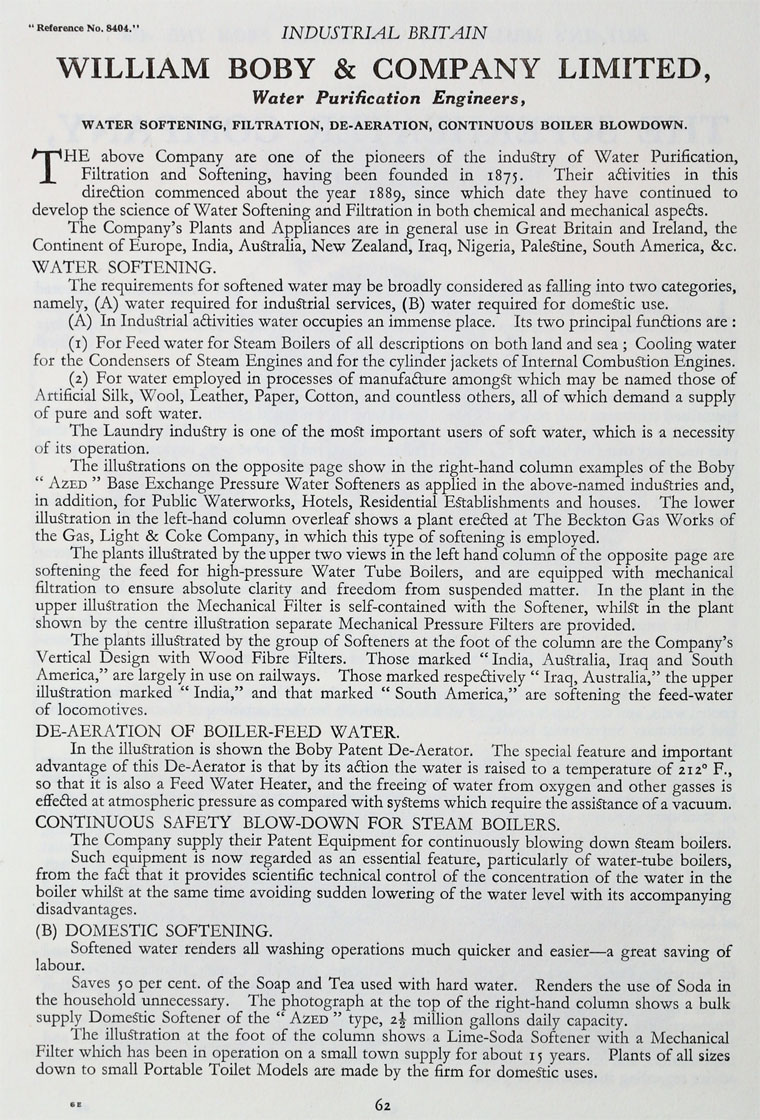 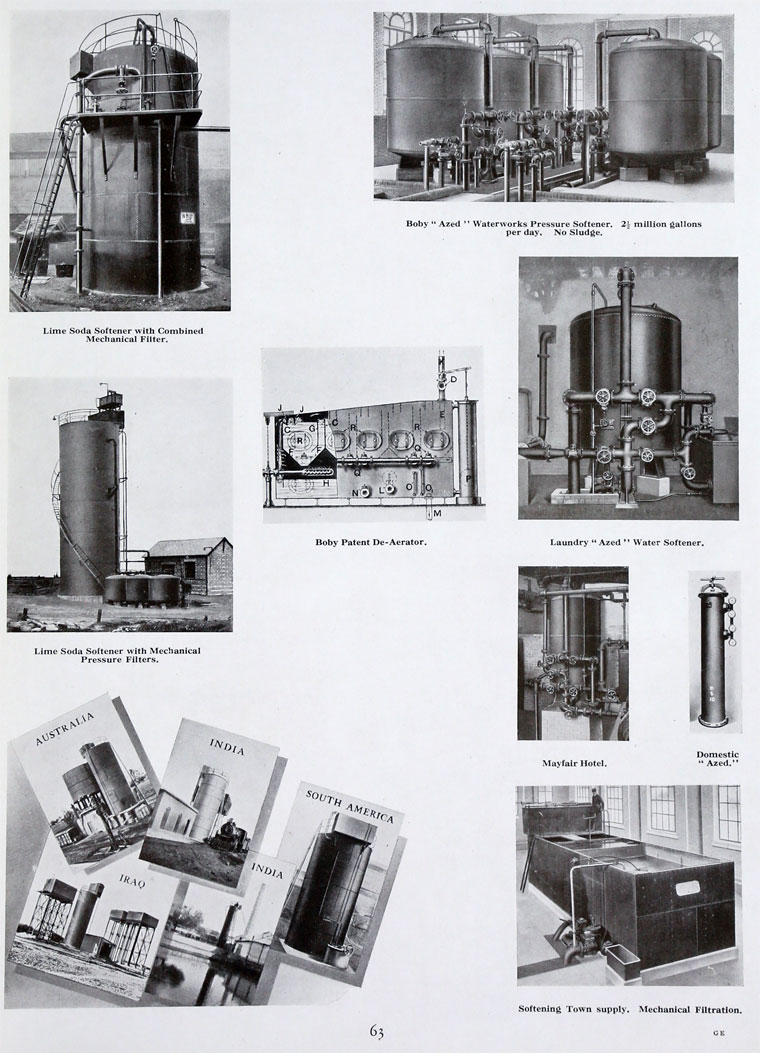 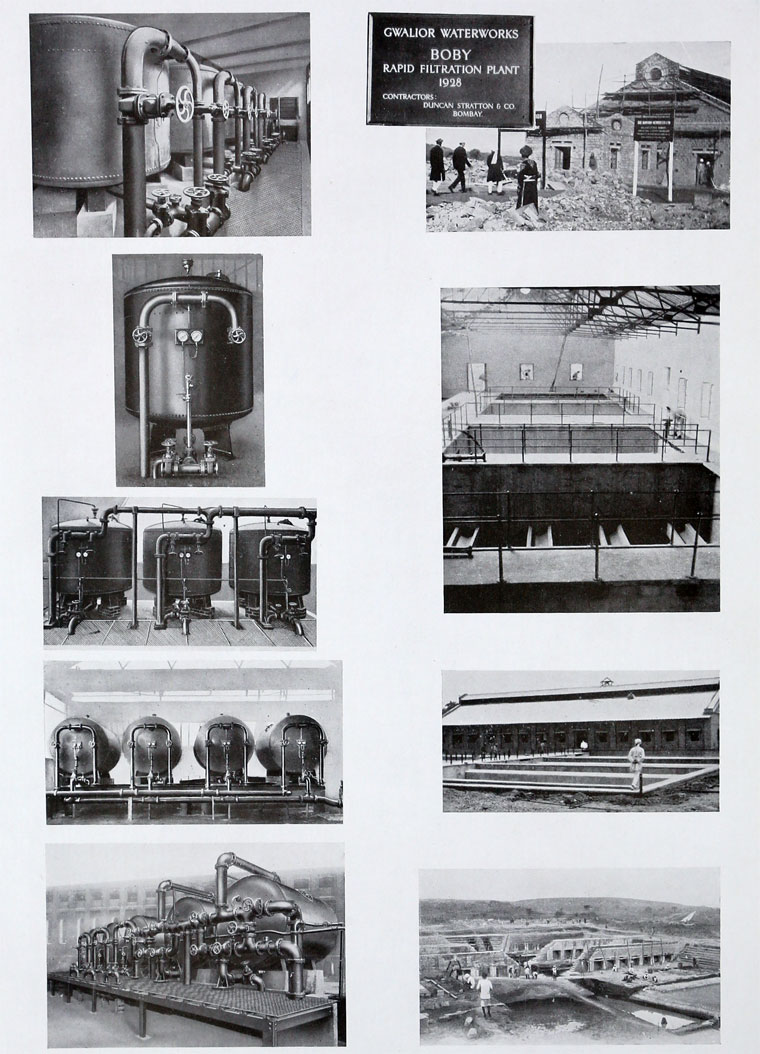 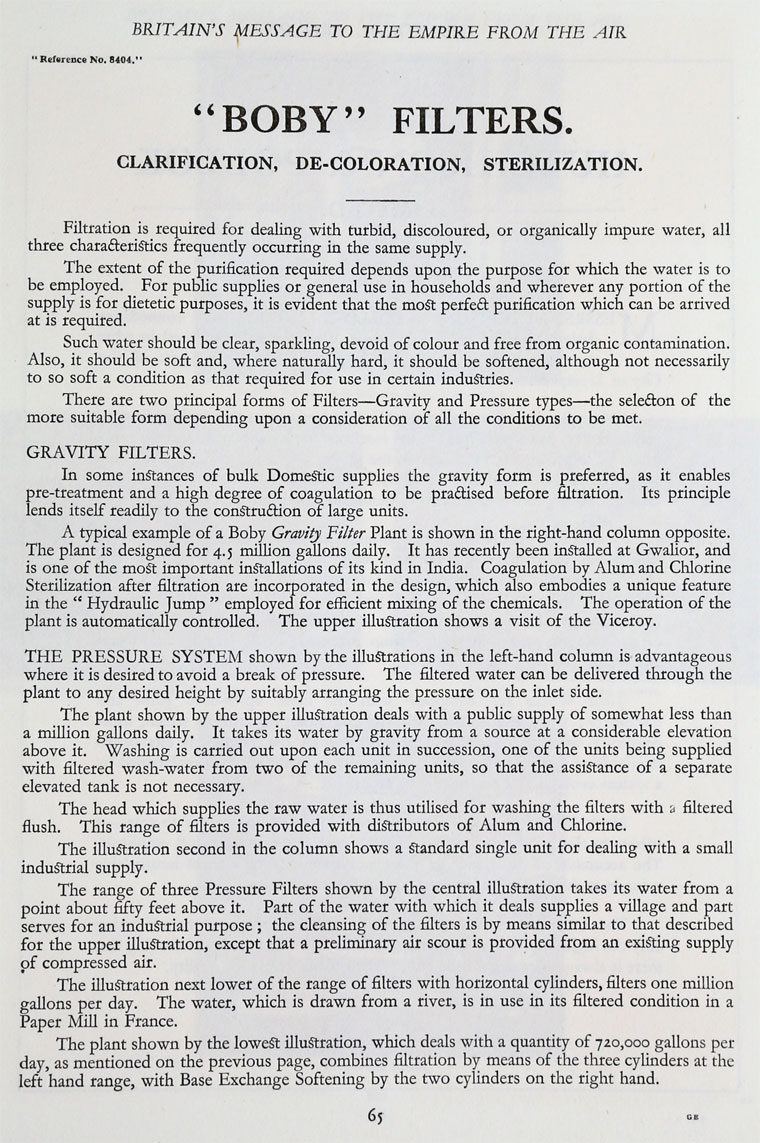 The above Company are one of the pioneers of the industry of Water Purification, Filtration and Softening, having been founded in 1875. Their activities in this direction commenced about the year 1889, since which date they have continued to develop the science of Water Softening and Filtration in both chemical and mechanical aspects.

The Company's Plants and Appliances are in general use in Great Britain and Ireland, the Continent of Europe, India, Australia, New Zealand, Iraq, Nigeria, Palestine, South America, &c.

(A) In Industrial activities water occupies an immense place. Its two principal functions are:

(1) For Feed water for Steam Boilers of all descriptions on both land and sea; Cooling water for the Condensers of Steam Engines and for the cylinder jackets of Internal Combustion Engines.

(2) For water employed in processes of manufacture amongst which may be named those of Artificial Silk, Wool, Leather, Paper, Cotton, and countless others, all of which demand a supply of pure and soft water.

The Laundry industry is one of the most important users of soft water, which is a necessity of its operation.

The illustrations on the opposite page show in the right-hand column examples of the Boby " AZED " Base Exchange Pressure Water Softeners as applied in the above-named industries and, in addition, for Public Waterworks, Hotels, Residential Establishments and houses. The lower illustration in the left-hand column overleaf shows a plant erected at The Beckton Gas Works of the Gas, Light and Coke Company, in which this type of softening is employed.

The plants illustrated by the upper two views in the left hand column of the opposite page are softening the feed for high-pressure Water Tube Boilers, and are equipped with mechanical filtration to ensure absolute clarity and freedom from suspended matter. In the plant in the upper illustration the 'Mechanical Filter is self-contained with the Softener, whilst in the plant shown by the centre illustration separate Mechanical Pressure Filters are provided.

The plants illustrated by the group of Softeners at the foot of the column arc the Company's Vertical Design with Wood Fibre Filters. Those marked "India, Australia, Iraq and South America," are largely in use on railways. Those marked respectively "Iraq, Australia," the upper illustration marked "India," and that marked "South America," arc softening the feed-water of locomotives.

In the illustration is shown the Boby Patent De-Aerator. The special feature and important advantage of this De-Aerator is that by its action the water is raised to a temperature of 212° F., so that it is also a Feed Water Heater, and the freeing of water from oxygen and other gasses is effected at atmospheric pressure as compared with systems which require the assistance of a vacuum. CONTINUOUS SAFETY BLOW-DOWN FOR STEAM BOILERS.

The Company supply their Patent Equipment for continuously blowing down Steam boilers.

Such equipment is now regarded as an essential feature, particularly of water-tube boilers, from the fall that it provides scientific technical control of the concentration of the water in the boiler whilst at the same time avoiding sudden lowering of the water level with its accompanying disadvantages.

Softened water renders all washing operations much quicker and easier - a great saving of labour.

Saves 50 per cent. of the Soap and Tea used with hard water. Renders the use of Soda in the household unnecessary. The photograph at the top of the right-hand column shows a bulk supply Domestic Softener of the "AZED" type, 2.5 million gallons daily capacity.

The illustration at the foot of the column shows a Lime-Soda Softener with a Mechanical Filter which has been in operation on a small town supply for about 15 years. Plants of all sizes down to small Portable Toilet Models are made by the firm for domestic uses.

Filtration is required for dealing with turbid, discoloured, or organically impure water, all three characteristics frequently occurring in the same supply.

The extent of the purification required depends upon the purpose for which the water is to be employed. For public supplies or general use in households and wherever any portion of the supply is for dietetic purposes, it is evident that the most perfect purification which can be arrived at is required.

Such water should be clear, sparkling, devoid of colour and free from organic contamination. Also, it should be soft and, where naturally hard, it should be softened, although not necessarily to so soft a condition as that required for use in certain industries.

There arc two principal forms of Filters - Gravity and Pressure types - the sele6ton of the more suitable form depending upon a consideration of all the conditions to be met.

In some instances of bulk Domestic supplies the gravity form is preferred, as it enables pre-treatment and a high degree of coagulation to be pra6tised before filtration. Its principle lends itself readily to the construction of large units.

A typical example of a Boby Gravity Filter Plant is shown in the right-hand column opposite. The plant is designed for 4.5 million gallons daily. It has recently been installed at Gwalior, and is one of the most important installations of its kind in India. Coagulation by Alum and Chlorine Sterilization after filtration arc incorporated in the design, which also embodies a unique feature in the "Hydraulic Jump" employed for efficient mixing of the chemicals. The operation of the plant is automatically controlled. The upper illustration shows a visit of the Viceroy.

THE PRESSURE SYSTEM shown by the illustrations in the left-hand column is advantageous where it is desired to avoid a break of pressure. The filtered water can be delivered through the plant to any desired height by suitably arranging the pressure on the inlet side.

The plant shown by the upper illustration deals with a public supply N somewhat less than a million gallons daily. It takes its water by gravity from a source at a considerable elevation above it. Washing is carried out upon each unit in succession, one of the units being supplied with filtered wash-water from two of the remaining units, so that the assistance of a separate elevated tank is not necessary.

The head which supplies the raw water is thus utilised for washing the filters with filtered flush. This range of filters is provided with distributors of Alum and Chlorine.

The illustration second in the column shows a standard single unit for dealing with a small industrial supply.

The range of three Pressure Filters shown by the central illustration takes Ss water from a point about fifty feet above it. Part of the water with which it deals supplies a village and part serves for an industrial purpose; the cleansing of the filters is by means similar to that described for the upper illustration, except that a preliminary air scour is provided from an existing supply of compressed air.

The illustration next lower of the range of filters with horizontal cylinders, filters one million gallons per day. The water, which is drawn from a river, is in use in its filtered condition in a Paper Mill in France.

The plant shown by the lowest illustration, which deals with a quantity of 720,000 gallons per day, as mentioned on the previous page, combines filtration by means of the three cylinders at the left hand range, with Base Exchange Softening by the two cylinders on the right hand.