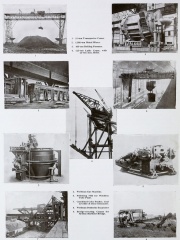 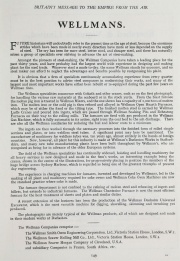 Amongst the pioneers of steel-making, the Wellman Companies have taken a leading place for the past thirty years, a. have probably had the largest world wide experience in designing and making plant for the steel trade. Wherever steel is made to-day, the name Wellman stands for economy, and no steel maker can afford to neglect the advantages and benefits possible by reorganising his plant.

It is obvious that a firm of specialists continuously accumulating experience from every quarter must be in the best position to advise steel companies in modernising their works, and many of the largest and most important works have either been rebuilt or re-equipped during the past few years on Wellman fines.

The Wellman specialities commence with Goliath a. other cranes, such as on the first photograph, for handling the various raw materials at the seaboard or in the stock yards. Front the blast furnace the molten pig iron is treated in Wellman Mixers, and the one shown has a capacity of 1,000 tons of molten iron. The molten iron or the cold pig is then refined and alloyed in Wellman Open Hearth Furnaces, which may be of either the fixed or the tilting type. The finished molten steel is carried by Wellman Ladle Cranes and poured into ingots, which are passed through Wellman Soaking Pits and Reheating Furnaces on their way to the rolling mills. The furnaces are fired with g. produced in the Wellman G. Machine, which is fully automatic in its action, right from the coal feed to the ash discharge. There are also all the Wellman auxiliaries for reducing the fuel and labour costs to a minimum.

The ingots are then worked through the necessary processes into the finished form of rolled simple sections and plates, or into weldless steel tubes. A significant point may here be mentioned. The manufacture of machinery for weldless tubes was, ten years ago, almost entirely in the hands of foreign countries. Now, however, all plant for this industry is made at Wellman's Darlaston Works in Stafford- shire, and many new tube manufacturing plants have been built throughout by Wellman's, who are recognised as being far in advance of the older European systems.

The field of the Wellman specialities has continually widened, hoisting and handling machinery for all heavy services is now designed and made in the firm's works, an interesting example being the cranes, shown in the centre of the illustrations, for progressively placing in position the members of the huge bridge across Sydney Harbour, which is regarded as being one of the greatest triumphs of present day engineering.

The experience in charging machines for furnaces, invented and developed by Wellman, led to the making of all plant and machinery required for coke ovens and Wellman Coke Oven Machines are now the standard practice where coke is made.

The furnace department is not confined to the refining of molten steel and reheating of ingots and billets, but extends to industrial furnaces. The Wellman Chantraine Furnace is now the most efficient furnace for the heat treatment of sheets and plates and similar duties.

A recent extension of the business has been the production of the Wellman Denholm Universal Excavator, which is the most versatile machine for digging, shovelling, skimming and trenching yet produced.