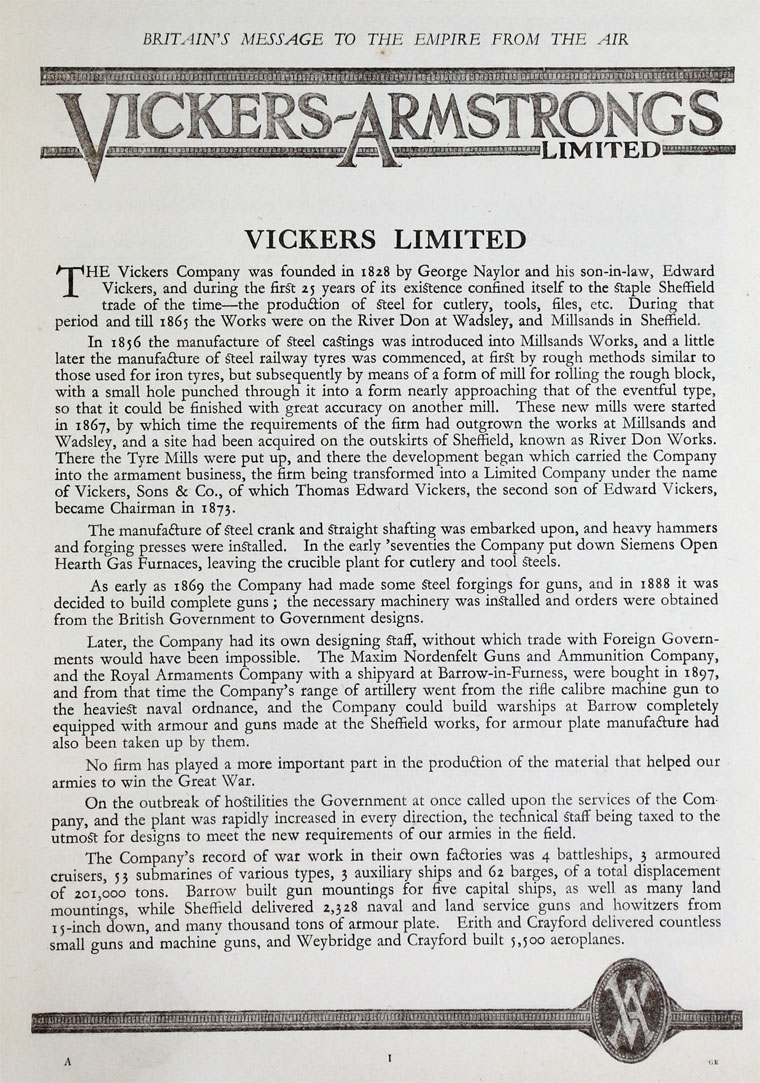 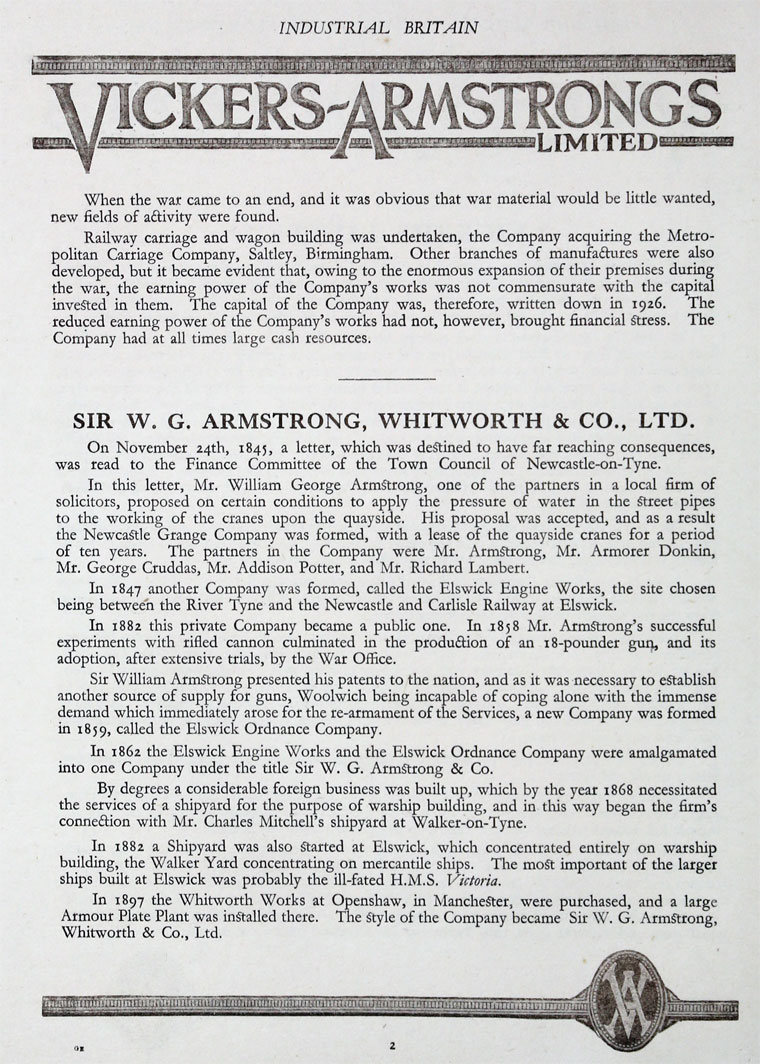 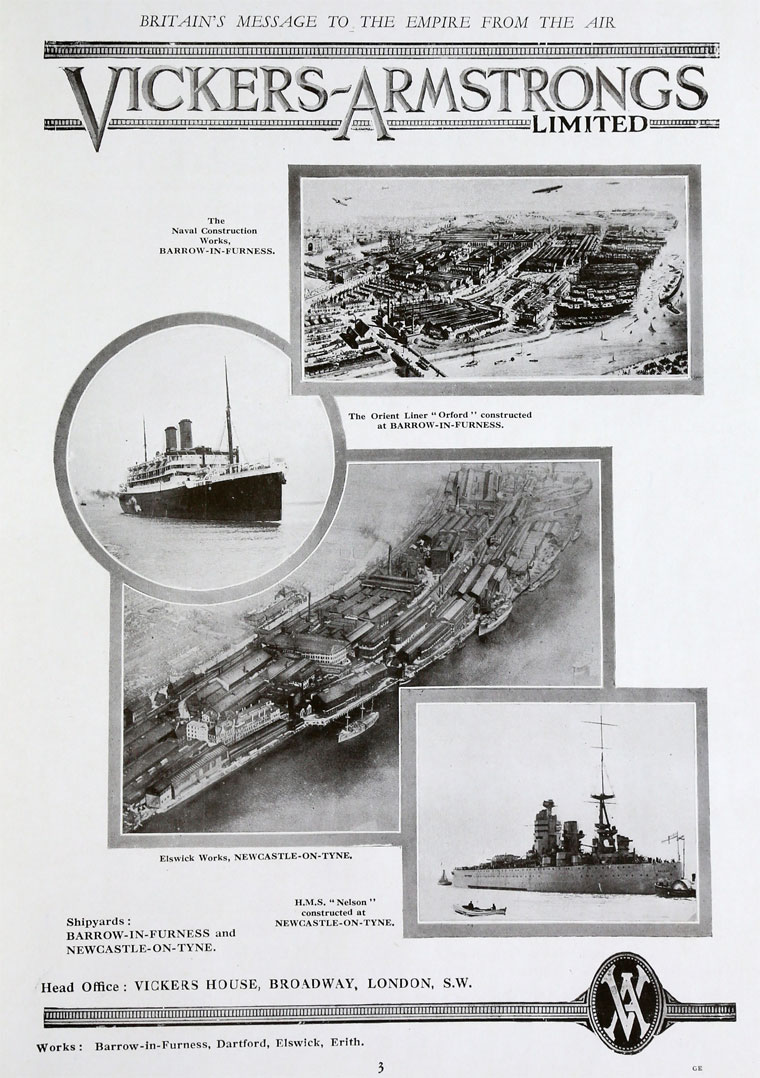 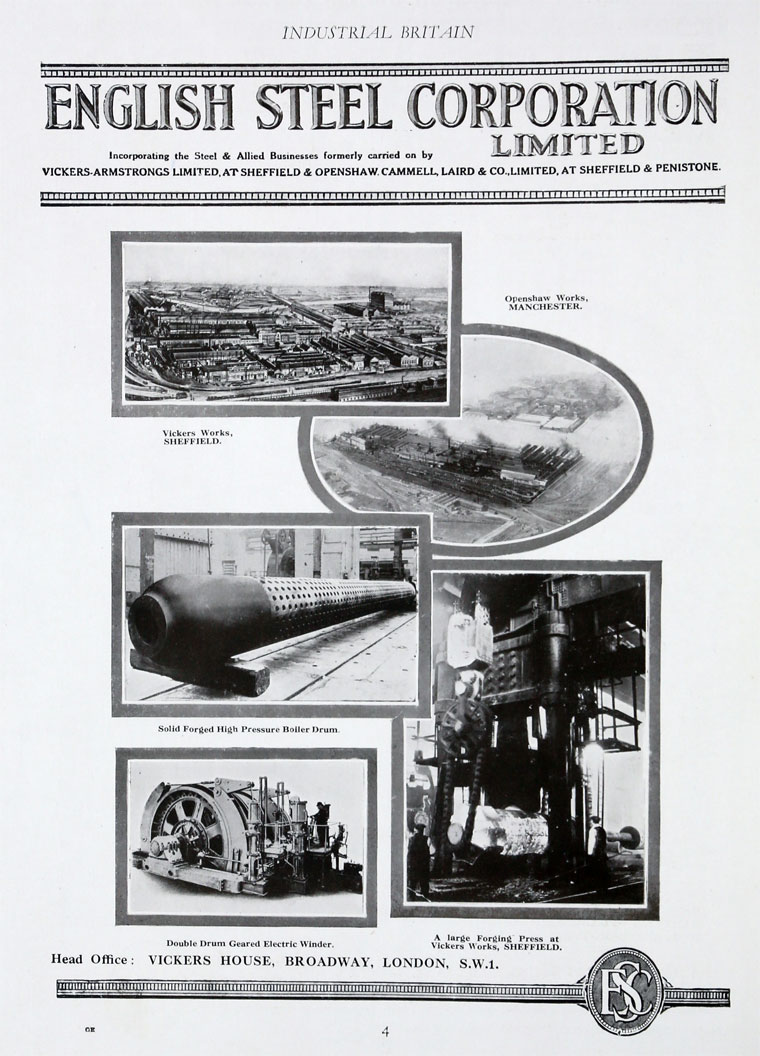 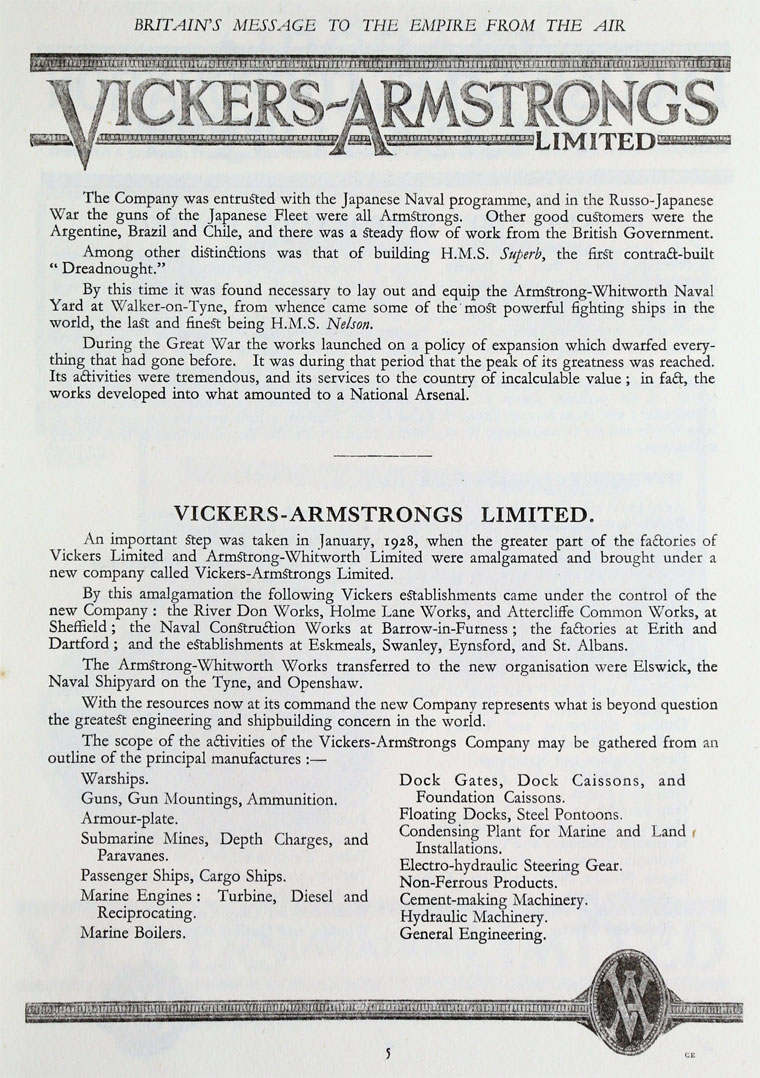 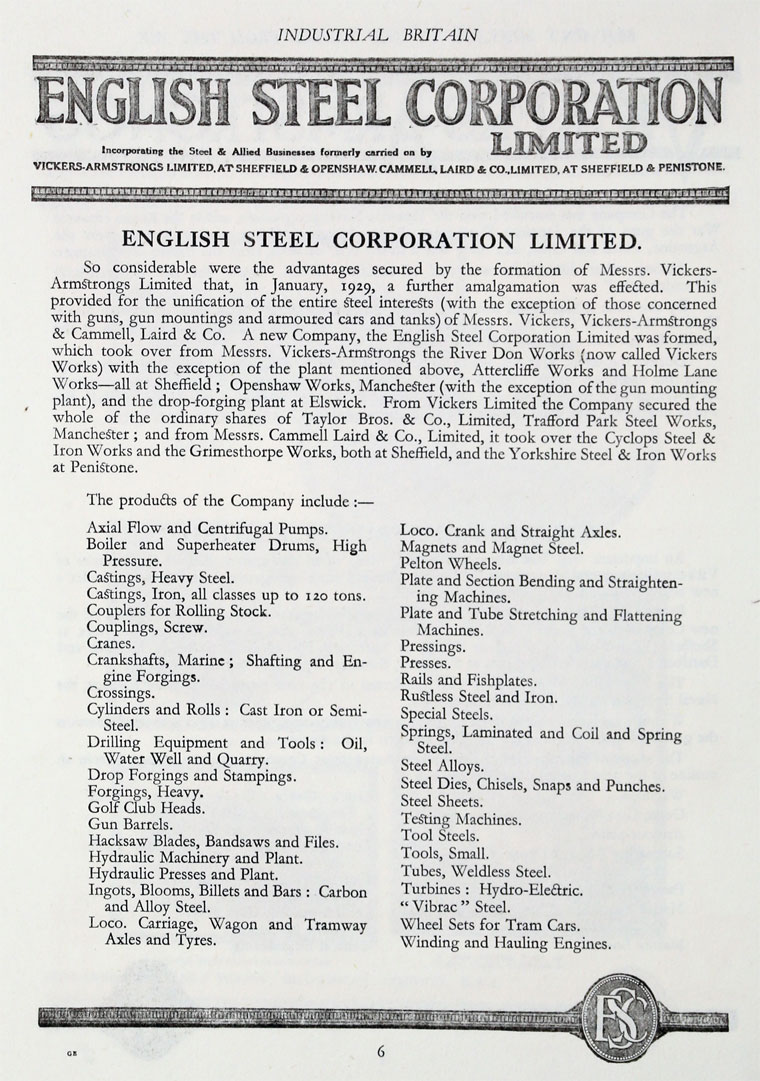 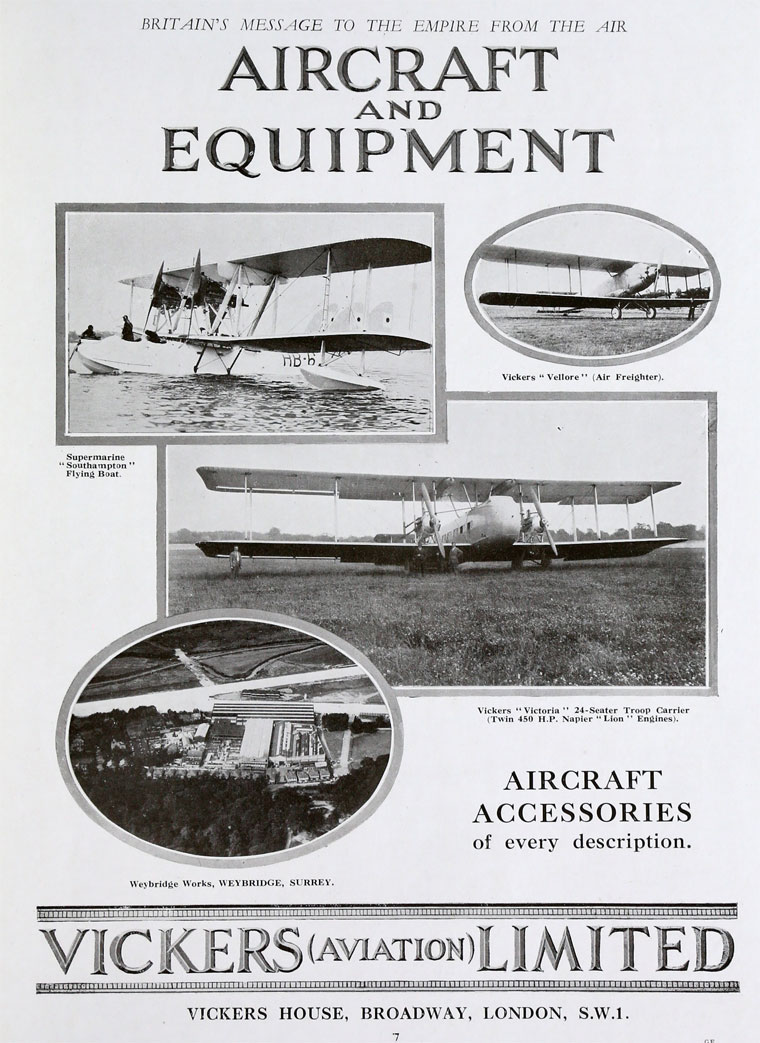 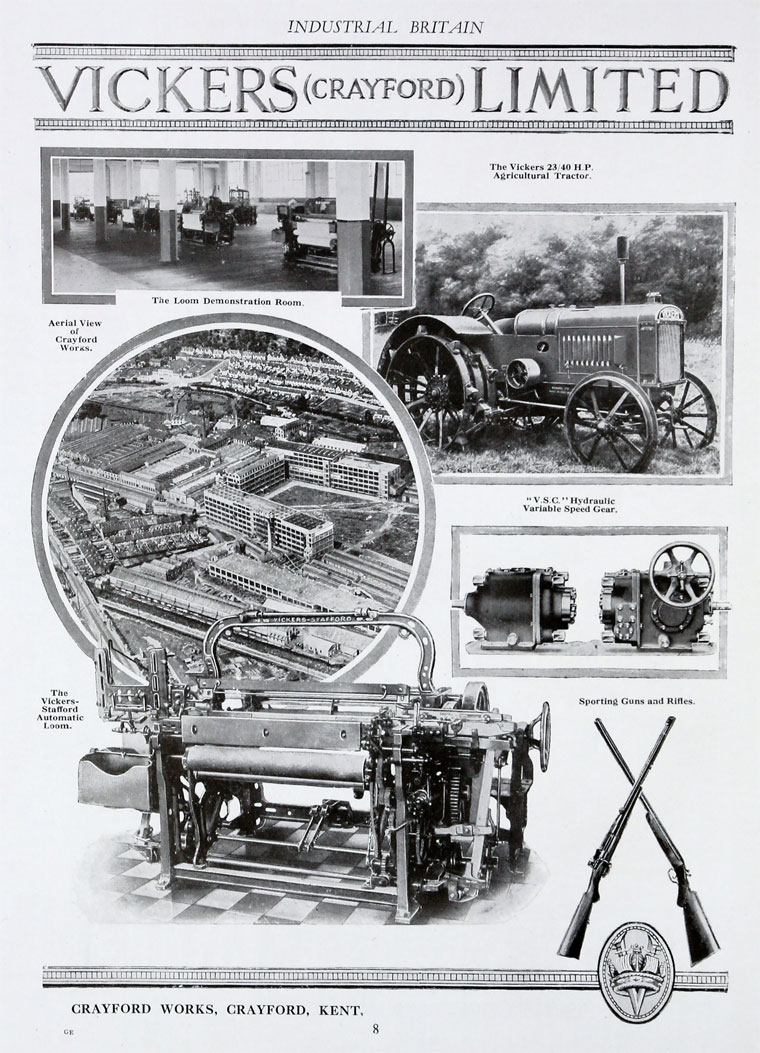 THE Vickers Company was founded in 1828 by George Naylor and his son-in-law, Edward Vickers, and during the first 5 years of its existence confined itself to the staple Sheffield trade of the time - the production of steel for cutlery, tools, files, etc. During that period and till 1865 the Works were on the River Don at Wadsley, and Millsands in Sheffield.

In 1856 manufacture of steel castings was introduced into Millsands Works, and a little later the manufacture of Steel railway tyres was commenced, at first by rough methods similar to those used for iron tyres, but subsequently by means of a form of mill for rolling the rough block, with a small hole punched through it into a form nearly approaching that of the eventful type, to that it could be finished with great accuracy on another mill. These new mills were started in 1867, by which time the requirements of ohs firm had outgrown the works at Millsands and Wadsley, and a site had been acquired on the outskirts of Sheffield, known as River Don Woths. There the Tyre Mills were put up, and them the development began which carried the Company Moss the armament business, the ban being transformed into a Limited Company under the name of Vickers, Sons & Co., of which Thomas Edward Vickers, the second son of Edward Vickers, became Chairman in 1873.

The manufacture of steel crank and straight shafting was embarked upon, and heavy hammers and forging presses were installed. In the early 'seventies the Company laid down Siemens Open Hearth Gas Furnaces, leaving the crucible plant for cutlery and tool steels.

As early as 1869, the Company had made some steel forgings for guns, and in 1888 it was decided to build complete guns. The necessary machinery was installed and orders were obtained from the British Government to Government designs.

Later, the Company had its own designing staff, without which trade with Foreign Governments would have been impossible. The Maxim Nordenfelt Guns and Ammunition Company, and the Royal Armaments Company with a shipyard at Barrow-in-Furness, were bought in 1897, and from that time the Company's range of artillery went from the rifle calibre machine gun to the heavies, naval ordnance, and the Company could build warships at Barrow completely equipped with armour and guns made at the Sheffield works, for armour plate manufacture had also been taken up by them.

No firm has played a more important part in the production of the material that helped our armies to win the Great War.

On the outbreak of hostilities the Government at once called upon the services of the Company, and the plant was rapidly increased in every direction, the technical staff being taxed to the utmost for designs to meet the new requirements of our armies in the fold.

The Company's record of war work in their own factories was 4 battleships, 3 armoured cruisers, 53 submarines of various types, 3 auxiliary ships and 61 barges, of a total displacement of zoi,000 tons. Barrow built gun mountings for five capital ships, as well as many land mountings, while Sheffield delivered 0,308 naval and land service guns and howitzers from 15-inch down, and many thousand tons of armour plate. Frith and Crayford delivered countless small guns and machine guns, and Weybridge and Crayford built 5,000 aeroplanes.

When the war came to an end, and it was obvious that war material would be little wanted, new fields of activity were found.

Railway carriage and wagon building was undertaken, the Company acquiring the Metropolitan Carriage Company, Saltley, Birmingham. Other branches of manufactures were also developed, but it became evident that, owing to the enormous expansion of their premises during the war, the earning power of the Company's works was not commensurate with the capital invested in them. The capital A the Company was, therefore, written down in 1926. The reduced earning power of the Company's works had not, however, brought financial stress. The Company had at all times large cash resources.

On November 24th, 1841, a letter, which was destined to have far reaching consequences, was read to the Finance Committee of the Town Council of Newcastle-on-Tyne.

In this letter, Mr. William George Armstrong, one of the partners in a local firm of solicitors, proposed on certain conditions to apply the pressure of water in the street pipes to the working of the cranes upon the quayside. His proposal was accepted, and as a result the Newcastle Grange Company was formed, with a lease of the quayside cranes for a period of ten years. The partners in the Company were Mr. Armstrong, Mr. Armorer Donkin, Mr. George Cruddas, Mr. Addison Potter, and Mr. Richard Lambert.

In 1847 another Company was formed, called the Elswick Engine Works, the site chosen being between the River Tyne and the Newcastle and Carlisle Railway at Elswick.

In 1882 this private Company became a public one. In 1858 Mr. Armstrong's successful experiments with rifled cannon culminated in the production of an i8-pounder gun, and its adoption, after extensive trials, by the War Office.

Sir William Armstrong presented his patents to the nation, and as it was necessary to establish another source of supply for guns, Woolwich being incapable of coping alone with the immense demand which immediately arose for the re-armament of the Services, a new Company was formed in 1859, called the Elswick Ordnance Company.

In 1862 the Elswick Engine Works and the Elswick Ordnance Company were amalgamated into one Company under the title Sir W. G. Armstrong & Co.

By degrees a considerable foreign business was built up, which by the year 1868 necessitated the services of a shipyard for the purpose of warship building, and in this way began the firm's connection with Mr. Charles Mitchell's shipyard at Walker-on-Tyne.

In 1882 a Shipyard was also Started at Elswick, which concentrated entirely on warship building, the Walker Yard concentrating on mercantile ships. The most important of the larger ships built at Elswick was probably the ill-fated H.M.S. Victoria.

In 1897 the Whitworth Works at Openshaw, in Manchester, were purchased, and a large Armour Plate Plant was installed there. The style of the Company became Sir W. G. Armstrong, Whitworth & Co., Ltd.

The Company was entrusted with the Japanese Naval programme, and in the Russo-Japanese War the guns of the Japanese Fleet were all Armstrongs. Other good customers were the Argentine, Brazil and Chile, and there was a steady flow of work from the British Government.

Among other destinations was that of building H.M.S. Superb, the first contract-built "Dreadnought"

By this time it was found necessary to lay out and equip the Armstrong-Whitworth Naval Yard at Walker-on-'Tyne, from whence came some of the moss powerful fighting ships in the world, the last and finest being H.M.S. Nelson.

During the Great War the works launched on a policy of expansion which dwarfed everything that had gone before. It was during that period that the peak of its greatness was reached. Its activities were tremendous, and its services to the country of incalculable value; in part, the works developed into what amounted to a National Arsenal.

An important Step was taken in January, 1928, when the greater part of the factories of Vickers Limited and Armstrong-Whitworth Limited were amalgamated and brought under a new company called Vickers-Armstrongs Limited.

By this amalgamation the following Vickers establishments came under the control of the new Company: the River Don Works, Holme Lane Works, and Attercliffe Common Works, at Sheffield; the Naval Construction Works at Barrow-in-Furness; the factories at Erith and Dartford; and the establishments at Eskmeals, Swanley, Eynsford, and St. Albans.

The Armstrong-Whitworth Works transferred to the new organisation were Elswick, the Naval Shipyard on the Tyne, and Openshaw.

With the resources now at its command the new Company represents what is beyond question the greatest engineering and shipbuilding concern in the world.

The scope of the activities of the Vickers-Armstrongs Company may be gathered from an outline of the principal manufactures:-

So considerable were the advantages secured by the formation of Messrs. Vickers-Armstrongs Limited that, in January, 1959, a further amalgamation was effected. This provided for the unification of the entire steel interests, (with the exception of those concerned with guns, gun mountings and armoured cars and tanks) of Messrs. Vickers, Vickers-Armstrongs Cammell, Laird & Co. A new Company, the English Steel Corporation Limited was formed, which took over from Messrs. Vickers-Armstrongs the River Don Works (now called Vickers Works) with the exception of the plant mentioned above, Attercliffe Works and Holme Lane Works-all at Sheffield Openshaw Works, Manchester (with the exception of the gun mounting plant), and the drop-forging plant at Elswick. From Vickers Limited the Company secured the whole of the ordinary shares of Taylor Bros. & Co., Limited, Trafford Park Steel Works, Manchester; and from Messrs. Cammell Laird & Co., Limited, it took over the Cyclops Steel & Iron Works and the Grimesthorpe Works, both at Sheffield, and the Yorkshire Steel & Iron Works at Penistone.

The products of the Company include:

Castings, Iron, all classes up to 120 tons. Couplers for Rolling Stock.