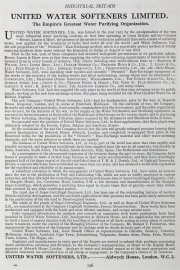 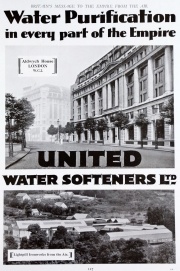 The new Company - United Water Softeners, Ltd. - had its headquarters, prior to the war, at Imperial House, Kingsway, London, and its works at Brentford, Middlesex. On the outbreak of war, the Company, its works and staff, were practically, if not actually, commandeered by the Government, and the entire organisation was devoted, for the duration of the war, to the supply of the Water Purification and Sterilising equipment so essential for the maintenance of the health of the British and Allied troops on the various fronts, and to producing the Water Softening, Heating and Filtration plants required by the Armament and Munitions firms at home. So successful were the products of United Water Softeners, Ltd., in these applications, that their plants were ultimately adopted by the French, Italian, Belgian and American Armies.

At the conclusion of the war the Company moved into the new and greatly enlarged premises forming their present headquarters, at Aldwych House, Aldwych, London, and completely re-equipped their plant at the Brentford works for the production of the "Permutit" Base-Exchange material and other water-softening chemicals, and the water softeners in which these are applied.

The business of United Water Softeners, Ltd., in every part of the world has since that time rapidly and steadily increased, and important installations have been supplied since the war in all countries, but notably in India, Australia, South Africa, The Sudan, South America, Italy, Spain, The Netherlands and Scandinavia. Asa consequence of the phenomenal expansion of the business during the past Jo years, the Company have found it necessary to make a further large increase in their works accommodation, and they have accordingly acquired half of the share capital of the old-established firm of T. H. and J. Daniels, Ltd., of Lightpill Ironworks, Stroud, a concern which has been established for more than 100 years, and has attained a world-wide reputation for the excellence and reliability of its manufactures.

A subsidiary enterprise in which the management of United Water Softeners, Ltd., have taken an interest since the war is the purification of Fuel and Lubricating Oils, which are now so widely employed in various industries, and they now hold the controlling interest in the well-known firm of Super-Centrifugal Engineers, Ltd., of Sharpies House, 101, Grosvenor Road, London, S.W.1, the licensees and manufacturers of the Sharpies Super-Centrifuge, which generates a purifying force equal to r7,000 times that of gravity - more than double that attained by any other centrifugal purifier.

The rapid rise of Super-Centrifugal Engineers, Ltd., has been one of the outstanding features of modern British industrial development, and the successful application of their processes lias been particularly noteworthy in the purification of the oils used in Diesel-engined vessels.

The whole of the plants of Super-Centrifugal Engineers, Ltd., as well as those of United Water Softeners Ltd., are manufactured at the Company's Lightpill Ironworks, Stroud, Gloucestershire. These works have been modernised and equipped with the latest and most efficient machines, and occupy several acres.

Fully equipped laboratories for analysis and research in connection with water purification have been installed at United Water Softeners, Ltd , headquarters at Aldwych House, and the organisation has attracted to itself a band of experts familiar with the handling of problems of all kinds arising in every phase of modern water treatment, under the control of the Managing Director of the Company, Mr. Roland T. Pemberton, who superintends the activities of the Company and its dealings with its clients in every part of the world.

Engineers and manufacturers in every part of the Empire are invited to submit their problems concerning water purification, softening and filtration, to the Company's representatives, or direct to the English Headquarters at Aldwych House, London. Analyses of water and detailed reports as to the most appropriate and effective treatment are submitted free of all charge or engagement, to the Company's clients in all countries.