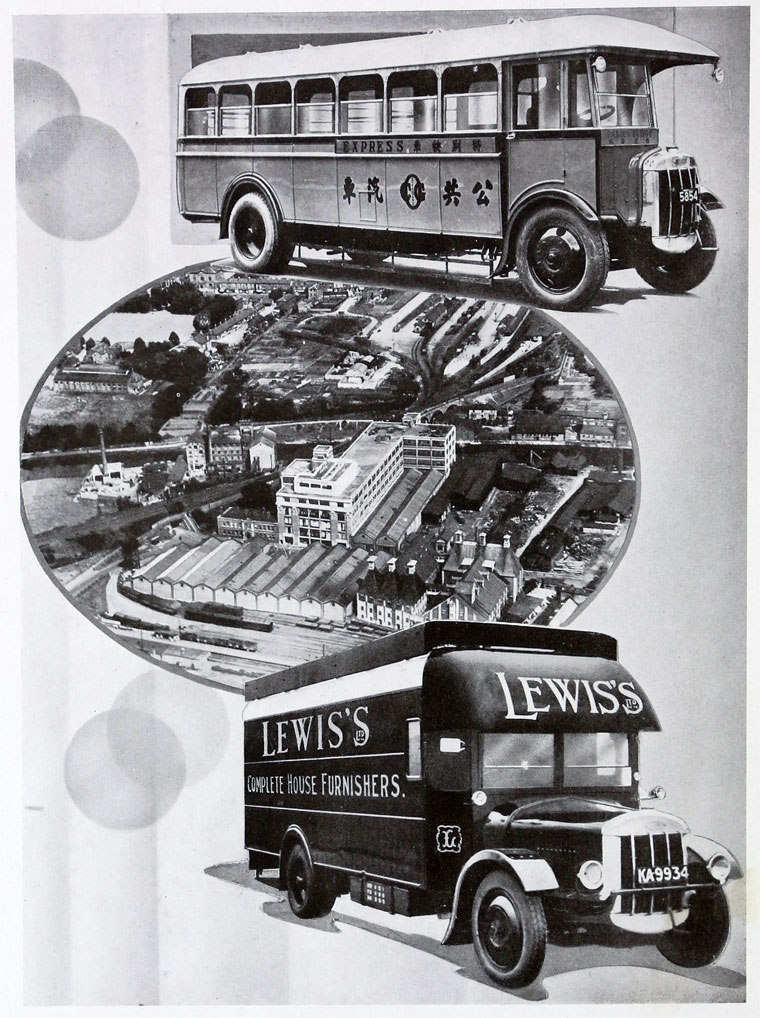 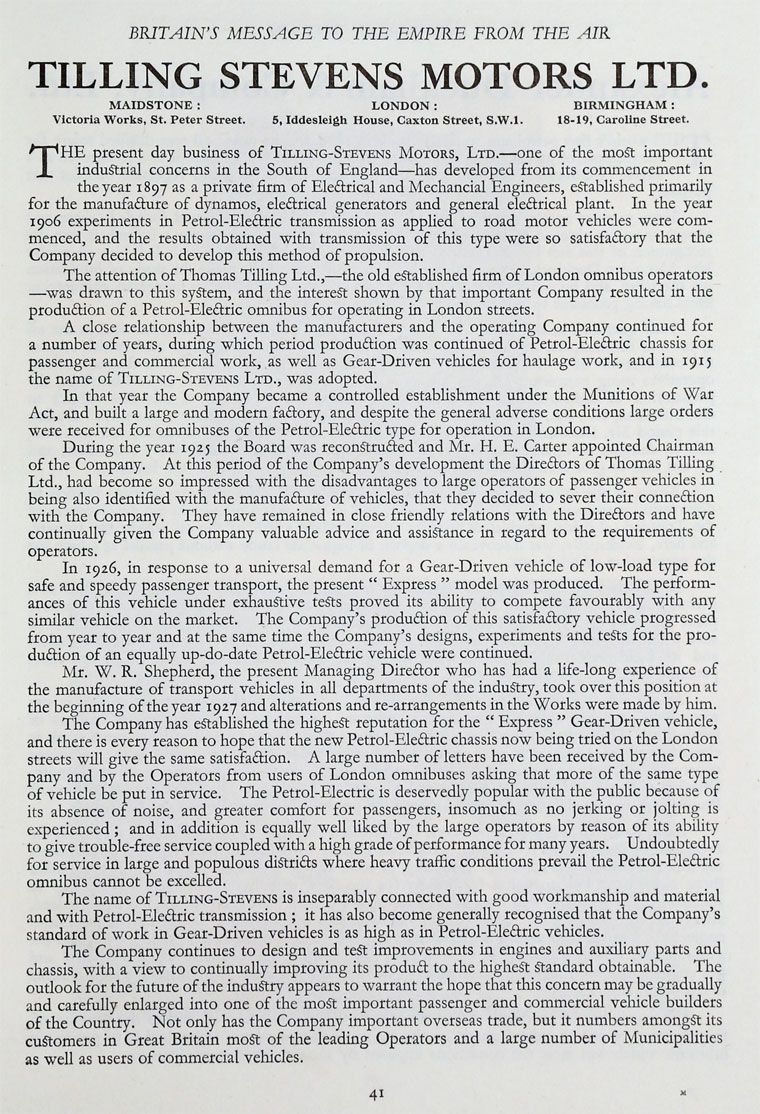 THE present day business of TILLING-STEVENS MOTORS, LTD.- one of the most important industrial concerns in the South of England - has developed from its commencement in the year 1897 a private firm of Electrical and Mechanical Engineers, established primarily for the manufacture of dynamos, electrical generators and general electrical plant. In the year 1906 experiments in Petrol-Electric transmission as applied to road motor vehicles were commenced, and the results obtained with transmission of this type were so satisfactory that the Company decided to develop this method of propulsion.

The attention of Thomas Tilling Ltd., - the old established firm of London omnibus operators - was drawn to this system, and the interest shown by that important Company resulted in the production of a Petrol-Electric omnibus for operating in London streets.

A close relationship between the manufacturers and the operating Company continued for a number of years, during which period production was continued of Petrol-Electric chassis for passenger and commercial work, as well as Gear-Driven vehicles for haulage work, and in t9t 5 the name of TILLING-STEVENS LTD., was adopted.

In that year the Company became a controlled establishment under the Munitions of War Act, and built a large and modern factory, and despite the general adverse conditions large orders were received for omnibuses of the Petrol-Electric type for operation in London.

During the year 1925 the Board was reconstructed and Mr. H. E. Carter appointed Chairman of the Company. At this period of the Company's development the Directors of Thomas Tilling Ltd., had become so impressed with the disadvantages to large operators of passenger vehicles in being also identified with the manufacture of vehicles, that they decided to sever their connection with the Company. They have remained in close friendly relations with the Directors and have continually given the Company valuable advice and assistance in regard to the requirements of operators.

In 1926, in response to a universal demand for a Gear-Driven vehicle of low-load type for safe and speedy passenger transport, the present" Express" model was produced. The performances of this vehicle under exhaustive tests proved its ability to compete favourably with any similar vehicle on the market. The Company's production of this satisfactory vehicle progressed from year to year and at the same time the Company's designs, experiments and teas for the production of an equally up-do-date Petrol-Electric vehicle were continued.

Mr. W. R. Shepherd, the present Managing Director who has had a life-long experience of the manufacture of transport vehicles in all departments of the industry, took over this position at the beginning of the year 1927 and alterations and re-arrangements in the Works were made by him.

The Company has established the highest reputation for the "Express" Gear-Driven vehicle, and there is every reason to hope that the new Petrol-Electric chassis now being tried on the London streets will give the same satisfaction. A large number of letters have been received by the Company and by the Operators from users of London omnibuses asking that more of the same type of vehicle be put in service. The Petrol-Electric is deservedly popular with the public because of its absence of noise, and greater comfort for passengers, insomuch as no jerking or jolting is experienced; and in addition is equally well liked by the large operators by reason of its ability to give trouble-free service coupled with a high grade of performance for many years. Undoubtedly for service in large and populous districts where heavy traffic conditions prevail the Petrol-Electric omnibus cannot be excelled.

The name of TILLING-STEVENS is inseparably connected with good workmanship and material and with Petrol-Electric transmission; it has also become generally recognised that the Company's standard of work in Gear-Driven vehicles jolt high as in Petrol-Electric vehicles.

The Company continues to design and tea improvements in engines and auxiliary parts and chassis, with a view to continually improving its product to the highest standard obtainable. The outlook for the future of the industry appears to warrant the hope that this concern may be gradually and carefully enlarged into one of the most important passenger and commercial vehicle builders of the Country. Not only has the Company important overseas trade, but it numbers amongst its customers in Great Britain most of the leading Operators and a large number of Municipalities as well as users of commercial vehicles.