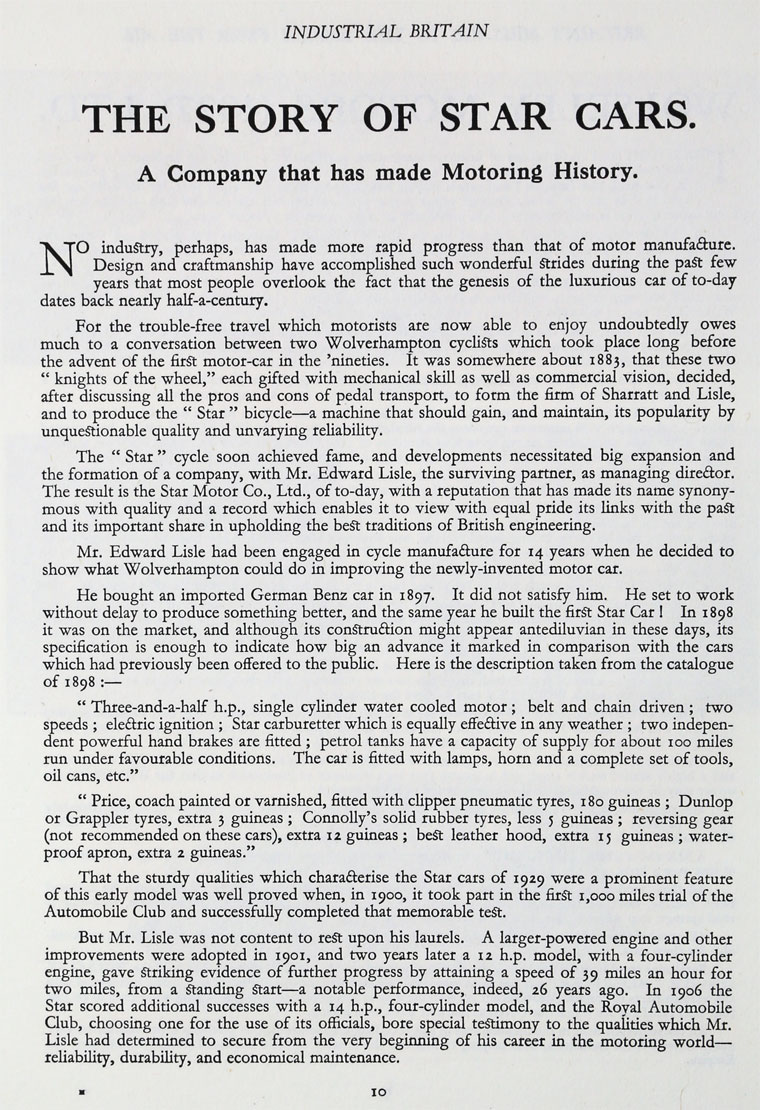 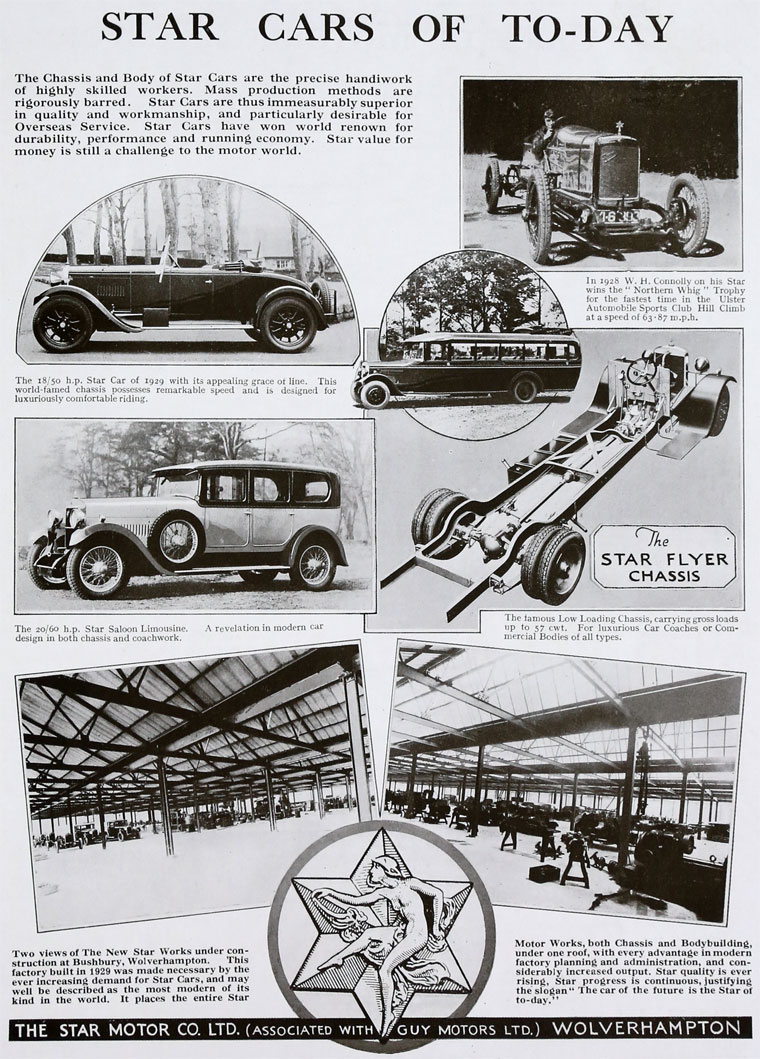 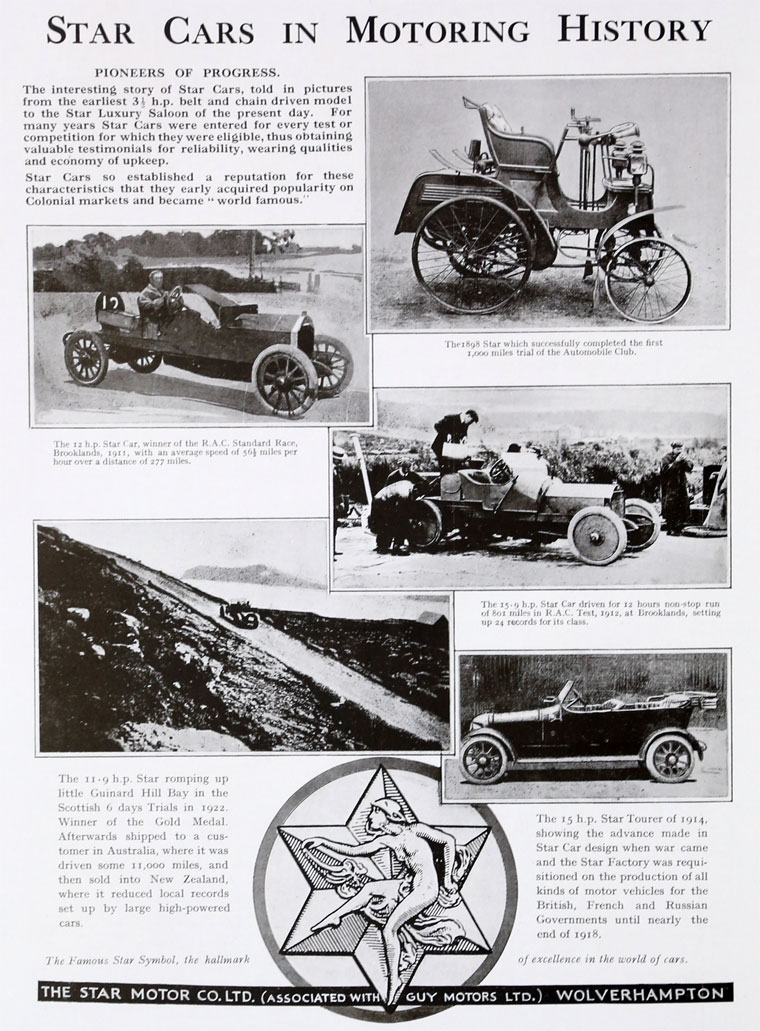 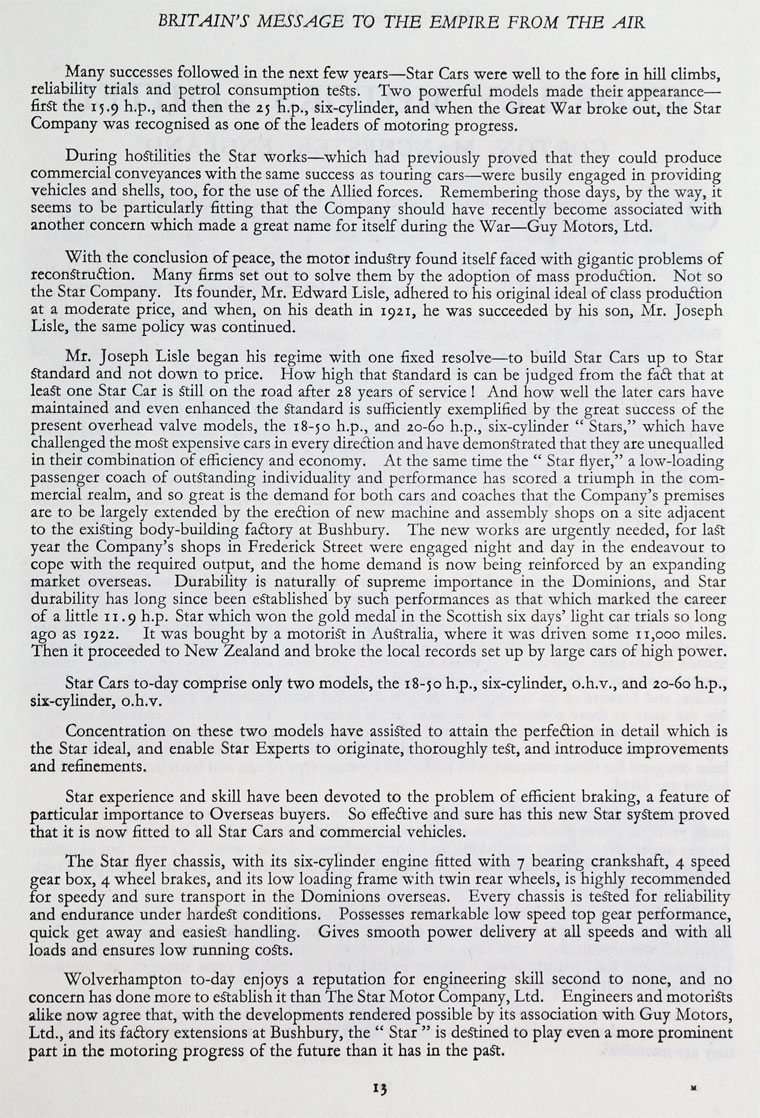 NO industry, perhaps, has made more rapid progress than that of motor manufacture. Design and craftmanship have accomplished such wonderful Strides during the pat few years that most people overlook the fact that the genesis of the luxurious car of to-day dates back nearly half-a-century.

For the trouble-free travel which motorists are now able to enjoy undoubtedly owes much to a conversation between two Wolverhampton cyclists which took place long before the advent of the fiat mop-car in the 'nineties. It was somewhere about 1883, that these two "knights of the wheel," each gifted with mechanical skill as well as commercial vision, decided, after discussing all the pros and cons of pedal transport, to form the firm of Sharratt and Lisle, and to produce the "Star" bicycle - a machine that should gain, and maintain, its popularity by unquestionable quality and unvarying reliability.

The "Star" cycle soon achieved fame, and developments necessitated big expansion and the formation of a company, with Mr. Edward Lisle, the surviving partner, as managing director. The result is the Star Motor Co., Ltd., of to-day, with a reputation that has made its mine synonymous with quality and a record which enables it to view with equal pride its links with the pat and its important share in upholding the best traditions of British engineering.

Mr. Edward Lisle had been engaged in cycle manufacture for 14 years when he decided to show what Wolverhampton could do in improving the newly-invented motor car.

He bought an imported German Benz car in 1897. It did not satisfy him. He set to work without delay to produce something better, and the same year he built the first Star Car in 1898 it was on the market, and although its construction might appear antediluvian in these days, its specification is enough to indicate how big an advance it marked in comparison with the cars which had previously been offered to the public. Here is the description taken from the catalogue of 1898:-

"Three-and-a-half h.p., single cylinder water cooled motor; belt and chain driven; two speeds; electric ignition; Star carburetter which is equally effective in any weather; two independent powerful hand brakes are fitted; petrol tanks have a capacity of supply for about too miles run under favourable conditions. The car is fitted with lamps, horn and a complete set of tools, oil cans, etc."

That the sturdy qualities which characterise the Star cars of 1929 were a prominent feature of this early model was well proved when, in 1900, it took part in the fiat 1,000 miles trial of the Automobile Club and successfully completed that memorable test.

But Mr. Lisle was not content to rat upon his laurels. A larger-powered engine and other improvements were adopted in 19o, and two years later a 12 h.p. model, with a four-cylinder engine, gave Striking evidence of further progress by attaining a speed of 39 miles an hour for two miles, from a standing start - a notable performance, indeed, 16 years ago. In 1906 the Star scored additional successes with a 14 h.p., four-cylinder model, and the Royal Automobile Club, choosing one for the use of its officials, bore special testimony to the qualities which Mr. Lisle had determined to secure from the very beginning of his career in the motoring world - reliability, durability, and economical maintenance.

Many successes followed in the next few years - Star Cars were well to the fore in hill climbs, reliability trials and petrol consumption teas. Two powerful models made their appearance first the 15.9 h.p., and then the 25 h.p., six-cylinder, and when the Great War broke out, the Star Company was recognised as one of the leaders of motoring progress.

During hostilities the Star works - which had previously proved that they could produce commercial conveyances with the same success as touring cars - were busily engaged in providing vehicles and shells, too, for the use of the Allied forces. Remembering those days, by the way, it seems to be particularly fitting that the Company should have recently become associated with another concern which made a great name for itself during the War - Guy Motors, Ltd.

With the conclusion of peace, the motor industry found itself faced with gigantic problems of reconstruction. Many firms set out to solve them by the adoption of mass production. Not so the Star Company. Its founder, Mr. Edward Lisle, adhered to his original ideal of class produ6tion at a moderate price, and when, on his death in 192 1, he was succeeded by his son, Mr. Joseph Lisle, the same policy was continued.

Mr. Joseph Lisle began his regime with one fixed resolve - to build Star Cars up to Star standard and not down to price. How high that standard is can be judged from the fart that at least one Star Car is Bill on the road after 28 years of service ! And how well the later cars have maintained and even enhanced the standard is sufficiently exemplified by the great success of the present overhead valve models, the 18-,o h.p., and zo-6o h.p., six-cylinder " Stars," which have challenged the most expensive cars in every direction and have demonstrated that they are unequalled in their combination of efficiency and economy. At the same time the " Star flyer," a low-loading passenger coach of outstanding individuality and performance has scored a triumph in the commercial realm, and so great is the demand for both cars and coaches that the Company's premises are to be largely extended by the erection of new machine and assembly shops on a site adjacent to the existing body-building factory at Bushbury. The new works are urgently needed, for last year the Company's shops in Frederick Street were engaged night and day in the endeavour to cope with the required output, and the home demand is now being reinforced by an expanding market overseas. Durability is naturally of supreme importance in the Dominions, and Star durability has long since been established by such performances as that which marked the career of a little it .9 h.p. Star which won the gold medal in the Scottish six days' light car trials so long ago as 19zz. It was bought by a motorist in Australia, where it was driven some tt,000 miles. Then it proceeded to New Zealand and broke the local records set up by large cars of high power.

Concentration on these two models have assisted to attain the perfection in detail which is the Star ideal, and enable Star Experts to originate, thoroughly test, and introduce improvements and refinements.

Star experience and skill have been devoted to the problem of efficient braking, a feature of particular importance to overseas buyers. So effective and sure has this new Star system proved that it is now fitted to all Star Cars and commercial vehicles.

The Star flyer chassis, with its six-cylinder engine fitted with 7 bearing crankshaft, 4 speed gear box, 4 wheel brakes, and its low loading frame with twin rear wheels, is highly recommended for speedy and sure transport in the Dominions overseas. Every chassis is tested for reliability and endurance under hard conditions. Possesses remarkable low speed top gear performance, quick get away and easiest handling. Gives smooth power delivery at all speeds and with all loads and ensures low running costs.

Wolverhampton to-day enjoys a reputation for engineering skill second to none, and no concern has done more to establish it than The Star Motor Company, Ltd. Engineers and motorists alike now agree that, with the developments rendered possible by its association with Guy Motors, Ltd., and its factory extensions at Bushbury, the "Star" is destined to play even a more prominent part in the motoring progress of the future than it has in the past.