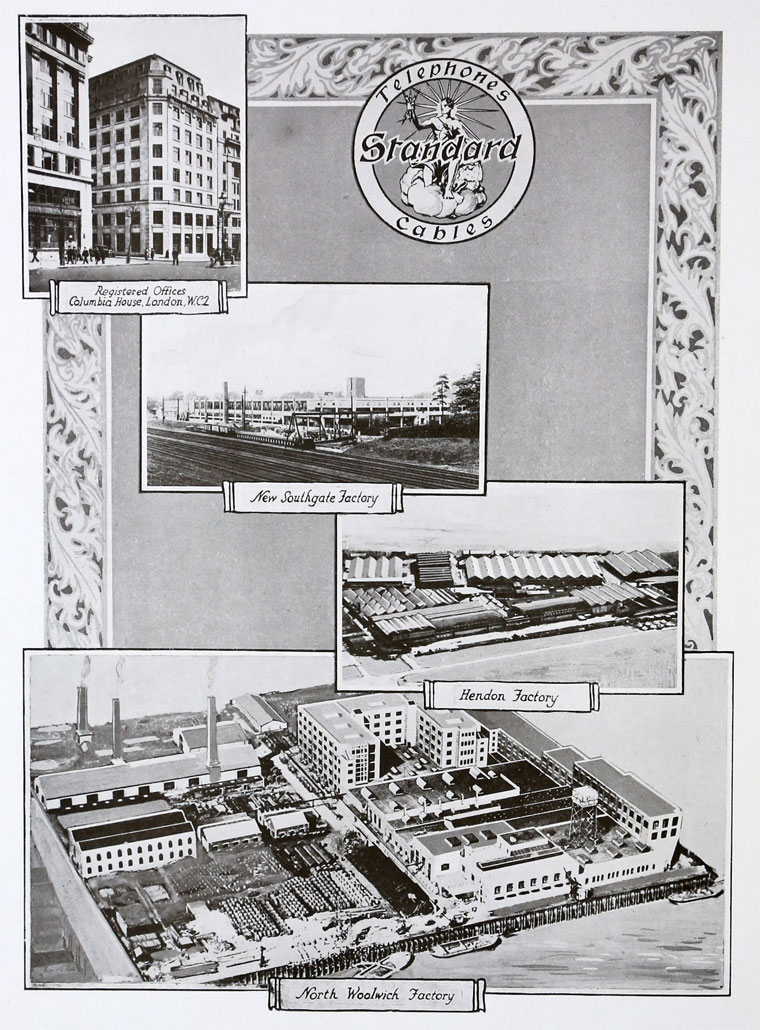 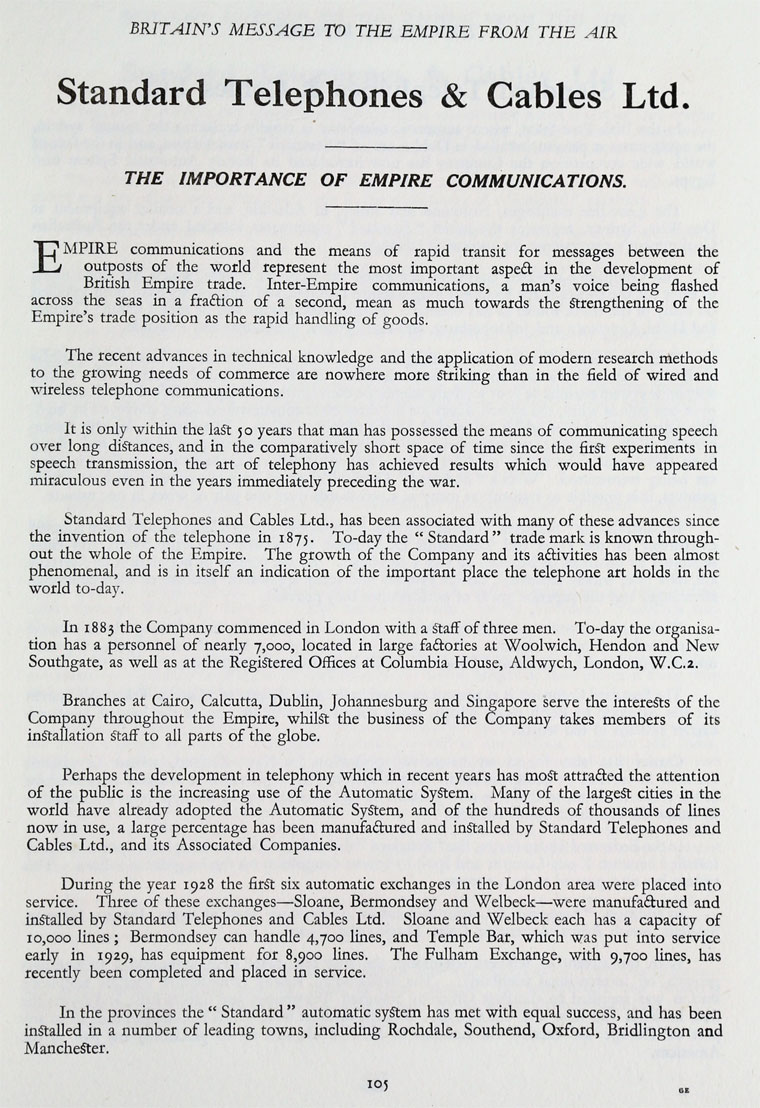 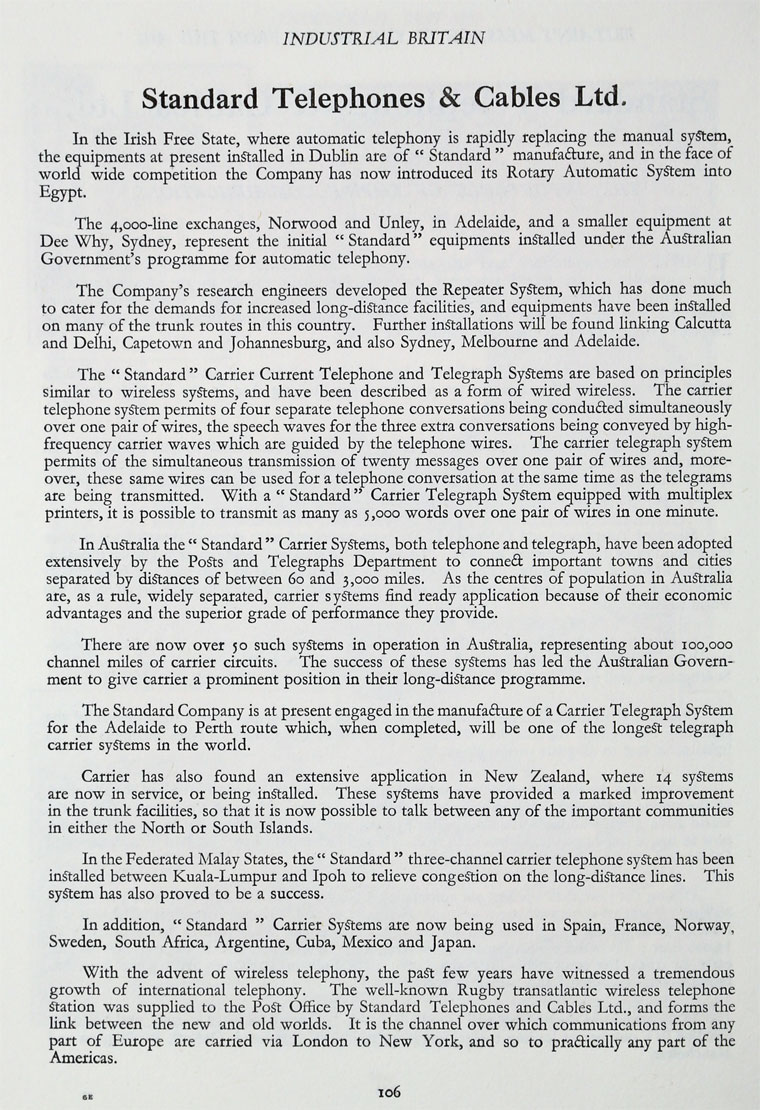 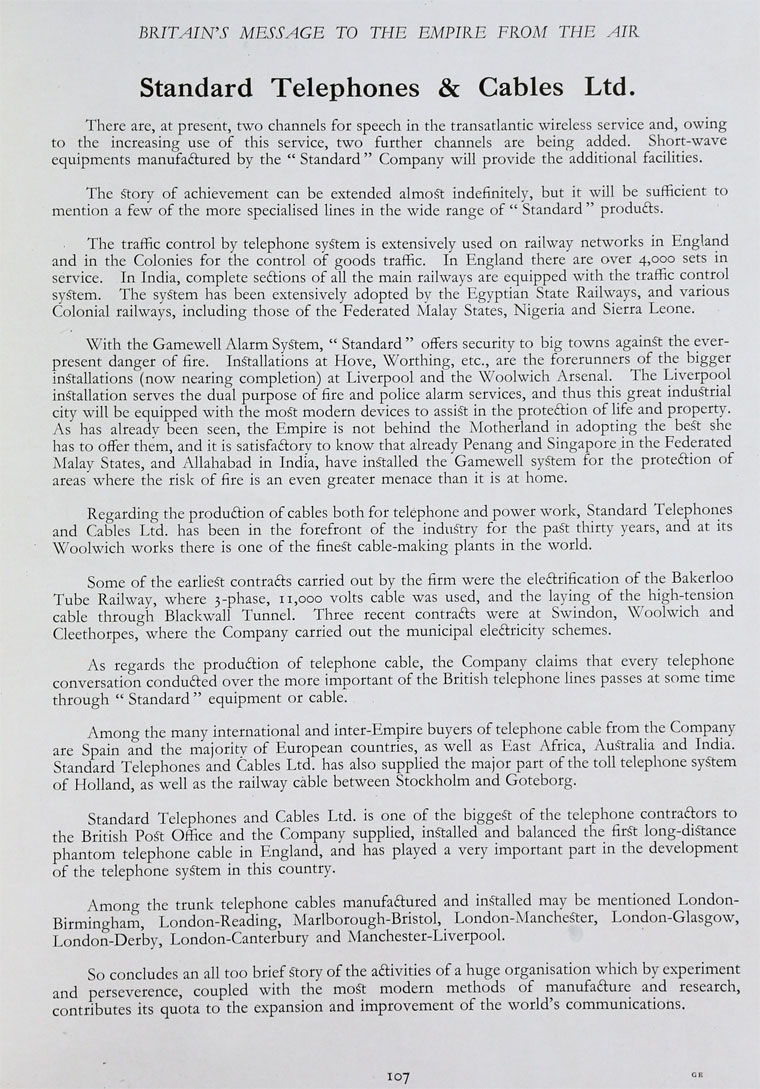 Empire communications and the means of rapid transit for messages between the outposts of the world represent the most important aspect in the development of British Empire trade. Inter-Empire communications, a man's voice being flashed across the seas in a fraction of a second, mean as much towards the strengthening of the Empire's trade position as the rapid handling of goods.

The recent advances in technical knowledge and the application of modern research methods to the growing needs of commerce are nowhere more striking than in the field of wired and wireless telephone communications.

It is only within the last 50 years that man has possessed the means of communicating speech over long distances, and in the comparatively short space of time since the lira experiments in speech transmission, the to of telephony has achieved results which would have appeared miraculous even in the years immediately preceding the war.

Standard Telephones and Cables Ltd., has been associated with many of these advances since the invention of the telephone in 1875. To-day the "Standard" trade mark is known throughout the whole of the Empire. The growth of the Company and its activities has been almost phenomenal, and is in itself an indication of the important place the telephone to holds in the world to-day.

In 1883 the Company commenced in London with a staff of three men. To-day the organisation has a personnel of nearly 7,000, located in large factories at Woolwich, Hendon and New Southgate, as well as at the Registered Offices at Columbia House, Aldwych, London, W.C.2.

Branches at Cairo, Calcutta, Dublin, Johannesburg and Singapore serve the interests of the Company throughout the Empire, whilst the business of the Company takes members of its installation Staff to all parts of the globe.

Perhaps the development in telephony which in recent years has most attracted the attention of the public is the increasing use of the Automatic System. Many of the largest cities in the world have already adopted the Automatic System, and of the hundreds of thousands of lines now in use, a large percentage has been manufactured and installed by Standard Telephones and Cables Ltd., and its Associated Companies.

During the year 1928 the first six automatic exchanges in the London area were placed into service. Three of these exchanges - Sloane, Bermondsey and Welbeck - were manufactured and installed by Standard Telephones and Cables Ltd. Sloane and Welbeck each has a capacity of 10,000. lines; Bermondsey can handle 4,700 lines, and Temple Bar, which was put into service early in 1929, has equipment for 8,900 lines. The Fulham Exchange, with 9,700 lines, has recently been completed and placed in service.

In the provinces the "Standard" automatic system has met with equal success, and has been installed in a number of leading towns, including Rochdale, Southend, Oxford, Bridlington and Manchester.

In the Irish Free State, where automatic telephony is rapidly replacing the manual system, the equipments at present installed in Dublin are of "Standard" manufacture, and in the face of world wide competition the Company has now introduced its Rotary Automatic System into Egypt.

The 4,000-line exchanges, Norwood and Unley, in Adelaide, and a smaller equipment at Dec Why, Sydney, represent the initial "Standard" equipments installed under the Australian Government's programme for automatic telephony.

The Company's research engineers developed the Repeater System, which has done much to cater for the demands for increased long-distance facilities, and equipments have been installed on many of the trunk routes in this country. Further installations will be found linking Calcutta and Delhi, Capetown and Johannesburg, and also Sydney, Melbourne and Adelaide.

The "Standard" Carrier Current Telephone and Telegraph Systems are based on principles similar to wireless systems, and have been described as a form of wired wireless. The carrier telephone spun permits of four separate telephone conversations being conducted simultaneously over one pair of wires, the speech waves for the three extra conversations being conveyed by high- frequency carrier waves which are guided by the telephone wires. The carrier telegraph system permits of the simultaneous transmission of twenty messages over one pair of wires and, moreover, these same wires can be used for a telephone conversation at the same time as the telegrams are being transmitted. With a "Standard" Carrier Telegraph System equipped with multiplex printers, it is possible to transmit as many as 5,000 words over one pair of wires in one minute.

In Australia the "Standard" Carrier Systems, both telephone and telegraph, have been adopted extensively by the Posts and Telegraphs Department to connect important towns and cities separated by distances of between 60 and 3,000 miles. As the centres of population in Australia arc, as a rule, widely separated, carrier systems find ready application because of their economic advantages and the superior grade of performance they provide.

There are now over 50 such systems in operation in Australia, representing about 100,000 channel miles of carrier circuits. The success of these systems has led the Australian Government to give carrier a prominent position in their long-distance programme.

The Standard Company is at present engaged in the manufacture of a Carrier Telegraph System for the Adelaide to Perth route which, when completed, will be one of the longest telegraph carrier systems in the world.

Carrier has also found an extensive application in New Zealand, where 14 systems are now in service, or being installed. These systems have provided a marked improvement in the trunk facilities, so that it is now possible to talk between any of the important communities in either the North or South Islands.

In the Federated Malay States, the "Standard" three-channel carrier telephone system has been installed between Kuala-Lumpur and 'poll to relieve congestion on the long-distance lines. This system has also proved to be a success.

With the advent of wireless telephony, the past few years have witnessed a tremendous growth of international telephony. The well-known Rugby transatlantic wireless telephone station was supplied to the Post Office by Standard Telephones and Cables Ltd., and forms the link between the new and old worlds. It is the channel over which communications from any part of Europe are carried via London to New York, and so to practically any part of the Americas.

There are, at present, two channels for speech in the transatlantic wireless service and, owing to the increasing use of this service, two further channels are being added. Short-wave equipments manufactured by the "Standard" Company will provide the additional facilities.

The story of achievement can be extended almost indefinitely, but it will be sufficient to mention a few of the more specialised lines in the wide range of "Standard" products.

The traffic control by telephone system is extensively used on railway networks in England and in the Colonies for the control of goods traffic. In England there are over 4,000 sets in service. In India, complete sections of all the main railways are equipped with the traffic control system. The system has been extensively adopted by the Egyptian State Railways, and various Colonial railways, including those of the Federated Malay States, Nigeria and Sierra Leone.

With the Gamewell Alarm System, "Standard" offers security to big towns against the ever- present danger of fire. Installations at Hove, Worthing, etc., are the forerunners of the bigger installations (now nearing completion) at Liverpool and the Woolwich Arsenal. The Liverpool installation serves the dual purpose of fire and police alarm services, and thus this great industrial city will be equipped with the most modern devices to assist in the protection of life and property. As has already been seen, the Empire is not behind the Motherland in adopting the best she has to offer them, and it is satisfactory to know that already Pena, and Singapore in the Federated Malay States, and Allahabad in India, have installed the Gamewell system for the protection of areas where the risk of fire is an even greater menace than it is at home.

Regarding the predation of cables both for telephone and power work, Standard Telephones and Cables Ltd. has been in the forefront of the industry for the past thirty years, and at its Woolwich works there is one of the finest cable-making plants in the world.

Some of the earliest contracts carried out by the firm were the electrification of the Bakerloo Tube Railway, where 3-p1ase, 1,000 volts cable was used, and the laying of the high-tension cable through Blackwall Tunnel. Three recent commas were at Swindon, Woolwich and Cleethorpes, where the Company carried out the municipal electricity schemes.

As regards the predation of telephone cable, the Company claims that every telephone conversation conducted over the more important of the British telephone lines passes at some time through "Standard" equipment or cable.

Among the many international and inter-Empire buyers of telephone cable from the Company are Spain and the majority of European countries, as well as East Africa, Australia and India. Standard Telephones and Cables Ltd. has also supplied the major part of the toll telephone system of Holland, as well as the railway cable between Stockholm and Goteborg.

Standard Telephones and Cables Ltd. is one of the biggest of the telephone contractors to the British E. Office and the Company supplied, installed and balanced the first long-distance phantom telephone cable in England, and has played a very important part in the development of the telephone system in this country.

So concludes all too brief story of the activities of a huge organisation which by experiment and perseverance, coupled with the most modern methods of manufacture and research, contributes its quota to the expansion and improvement of the world's communications.