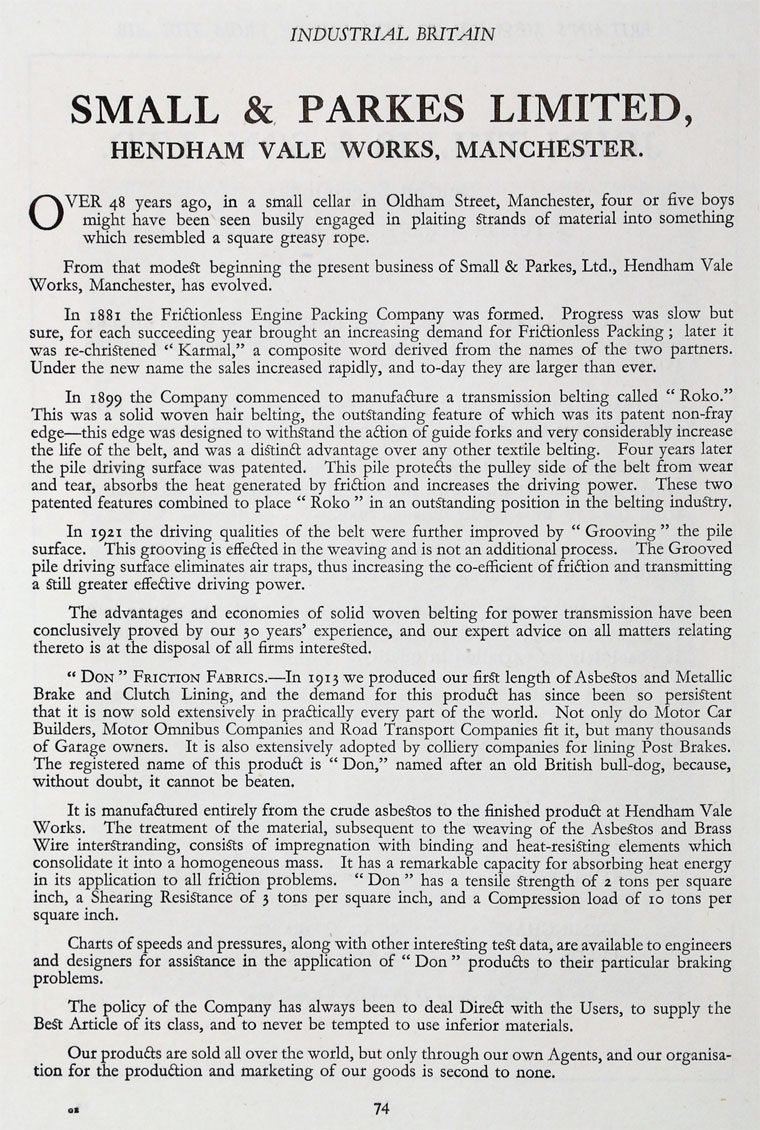 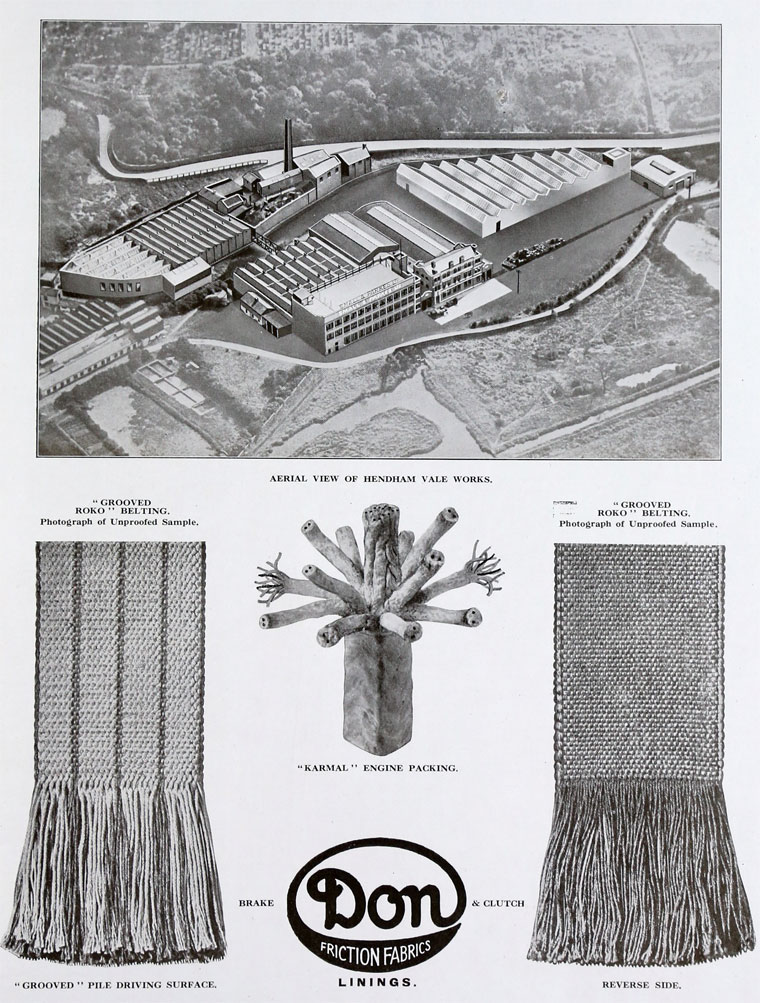 Over 48 years ago, in a small cellar in Oldham, Street, Manchester, four or five boys might have been seen busily engaged in plaiting strands of material in to something which resembled a square greasy rope.

From that modest beginning the present business of Small and Parkes, Ltd., Hendham Vale Works, Manchester, has evolved.

In 1881 the Frictionless Engine Packing Company was formed. Progress was slow but sure, for each succeeding year brought an increasing demand for Frictionless Packing later it was re-christened "Karmal," a composite word derived from the names of the two partners. Under the new name the sales increased rapidly, and to-day they are larger than ever.

In 1899 the Company commenced to manufacture a transmission belting called "Roko." This was a solid woven hair belting, the outstanding feature of which was its patent non-fray edge - this edge was designed to withstand the action of guide forks and very considerably increase the life of the belt, and was a distinct advantage over any other textile belting. Four years later the pile driving surface was patented. This pile prote4ts the pulley side of the belt from wear and tear, absorbs the heat generated by friction and increases the driving power. These two patented features combined to place "Roko" in an outstanding position in the belting industry.

In 1921 the driving qualities of the belt were further improved by " Grooving " the pile surface. This grooving is effected in the weaving and is not an additional process. The Grooved pile driving surface eliminates air traps, thus increasing the co-efficient of friction and transmitting a still greater effective driving power.

The advantages and economies of solid woven belting for power transmission have been conclusively proved by our 3o years' experience, and our expert advice on all matters relating thereto is at the disposal of all firms interested.

"DON" FRICTION FABRICS.-In 1913, we produced our first length of Asbestos and Metallic Brake and Clutch Lining, and the demand for this produ6t has since been so persistent that it is now sold extensively in practically every part of the world. Not only do Motor Car Builders, Motor Omnibus Companies and Road Transport Companies fit it, but many thousands of Garage owners. It is also extensively adopted by colliery companies for lining Post Brakes. The registered name of this product is "Don," named after an old British bull-dog, because, without doubt, it cannot be beaten.

It is manufactured entirely from the crude asbestos to the finished product at Hendham Vale Works. The treatment of the material, subsequent to the weaving of the Asbestos and Brass Wire interstranding, conies of impregnation with binding and heat-resifting elements which consolidate it into a homogeneous mass. It has a remarkable capacity for absorbing heat energy in its application to all friction problems. " Don " has a tensile strength of 2 tons per square inch, a Shearing Resistance of 3 tons per square inch, and a Compression load of 10 tons per square inch.