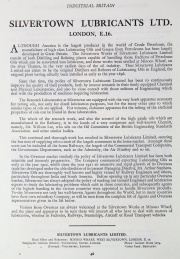 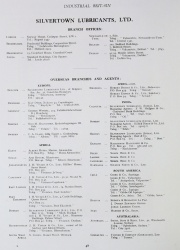 ALTHOUGH America is the largest producer in the world of Crude Petroleum, the manufacture of high class Lubricating Oils and Grease from Petroleums has been largely developed in Great Britain. The Silvertown Works of Silvertown Lubricants Limited consist of both Distilling and Refining plants capable of handling those fractions of Petroleum Oils which can be converted into lubricants, and these works were erected at Minoco Wharf, on the river Thames, in the very earliest days of the oil industry. Thus Silvertown Lubricants Limited can claim to be the original Distillers and Refiners of Lubricating Oils in England, the original plant having dually been installed as early as the year 1896.

Since that time, the policy of Silvertown Lubricants Limited has been to continuously . . . . . . . .deal with the production of machines requiring lubrication.

The Research Laboratories at Silvertown are equipped with the very latest apparatus necessary for testing oils, not only for dire& lubrication purposes, but for the many other uses to which similar types of oils are applied. For instance, elaborate apparatus for the sensing of the electrical properties of oils can be found in these laboratories.

The whole of the research work, and also the control of the high grade oils which are manufactured in the Refinery, is in the hands of a very competent and well-known Chemist, namely, Mr. William Lee, who ads on the Oil Committee of the British Engineering Standards Association, and other similar bodies.

This continual and thorough work has resulted in Silvertown Lubricants Limited, securing the business of supplying oils to most of the largest consumers in the home market. Amongst these users can be included all the home Railways, the largest of the Commercial Transport Companies, the Government Departments, such as the Admiralty, the Air Ministry and so on.

In the Overseas market similarly the policy of Silvertown Lubricants Limited has been both scientific and intensely progressive. The Company commenced exporting Lubricating Oils as early as the year 1900, whilst since the year 1921 an intensive and rapid growth of its overseas trade has developed under the able direction of its present Managing Director, Mr. Arthur Stephens. Silvertown Oils are thoroughly well known and highly valued by Railway Engineers and others, particularly throughout India and South America. Before opening up in any particular Overseas market, Silvertown has always adopted the policy of sending out trained Engineers and lubrication experts to Study the lubricating problems which exist its those countries, and subsequently agents of the highest Standing its the various countries were appointed to handle Silvertown products. To-day Silvertown not only has well-known Agents throughout the World, but in many countries have their own subsidiary Company, as will be seen from the complete list of Agents and Overseas representatives given its the his below.

Visitors from Overseas are always welcomed at the Silvertown Works at Minoco Wharf, and the plant and apparatus to be seen there will interest all who have to deal with matters of lubrication, whether in Factories, Railways, Steamships, Aircraft or Road Transport vehicles.