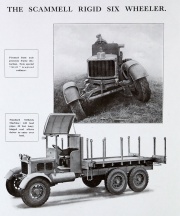 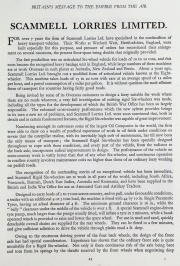 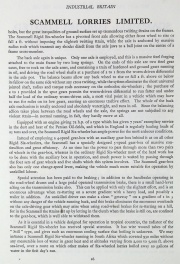 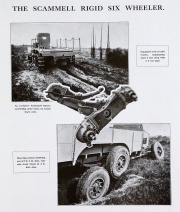 FOR over 7 years the firm of Scammell Lorries Ltd. have specialised in the construction of heavy transport vehicles. Their Works at Watford West, Hertfordshire, England, were built especially for this purpose, and pressure of orders has necessitated their enlargement on several occasions, the present floor-space being double that originally provided.

The first production was an articulated Six-wheel vehicle for loads of 10 to 12 tons, and this soon became the recognised heavy haulage unit in England, while large numbers of these machines are at work Overseas in such places as Australia, New Zealand and Persia. About 2 years ago, Scammell Lorries Ltd. brought out a modified form of articulated vehicle known as the Eight-wheeler. This machine takes loads of 15 to 20 tons with case at an average speed of t z miles per hour, and a petrol consumption of 5 miles per gallon. It is without question the most efficient form of transport for countries having fairly good roads.

Being invited by some of its Overseas customers to design a lorry suitable for work where there are no roads whatever, a very full investigation of existing rigid Six-wheelers was made, including all the types for the development of which the British War Office has been to largely responsible. The enhanced cross-country performance which the new system provides brings in its turn a new set of problems, and Scammell Lorries Ltd. were soon convinced that, both in details and in certain fundamental features, the Rigid Six-wheeler was capable of great improvement.

Numbering amongst its customers some of the largest Oil Companies in the world, the firm were able to draw on a wealth of practical experience of work in oil fields under conditions so severe that the caterpillar tractor, with its inevitably high cost of maintenance, has till now been the only means of transport the Scammell Rigid Six-wheeler has been specially designed throughout to cope with these conditions, and every part of the vehicle, from the radiator to the back axle, incorporates radical improvements in design. The performance of the vehicle on cross-country work is vastly better than that of any other Six-wheeler, and continuous operation in roadless country involves maintenance cons no higher than those of an ordinary lorry working on perfect roads.

The recognition of the outstanding merits of an exceptional vehicle has been immediate, and Scammell Rigid Six-wheelers are at work in all parts of the world, including South Africa, Venezuela, Burmah, Dutch East Indies, Australia and Roumania, and have been supplied to the British and India War Office for use as Armoured Cars and Artillery Tractors.

Designed to carry loads of 5 to 7 tons across country, and to pull, under favourable conditions, a trailer with an additional 4 or 5 tons load, the machine is fitted with 44 by to in. Single Pneumatic Tyres, having an actual diameter of 4 ft. The minimum ground clearance is 16 in., while the "belly" clearance under the middle of the vehicle is over 2 ft. A special Scammell engine-driven tyre pump, much larger than the pumps usually fitted, will inflate a tyre in 7 minutes, while a hand- operated winch is provided to raise and lower the spare wheel. For use in mud and sand, quickly detachable overall chains are supplied for the rear wheels. They can be fitted in a few minutes, and give sufficient adhesion to drive the vehicle through plastic mud 2 ft. deep.

Owing to the enormous driving power of the four back wheels, the design of the front axle has had special consideration. Experience has shown that the ordinary front axle is quite unsuitable for a Rigid Six-wheeler. Not only is there continuous risk of the axle being bent and torn from its springs by the thrusts received by the front wheels when negotiating deep holes, but the great inequalities of ground surface set up tremendous twisting Strains on the frames. The Scammell Rigid Six-wheeler has a pivoted front axle allowing either front wheel to rise or fall 2 ft. without imposing the slight twisting Strain, while the axle is anchored by massive radius rods which transmit any shocks distil from the axle jaws to a ball joint on the centre of a frame cross-member2

The back axle again is unique. Only one axle is employed, and this is a massive Steel forging attached to the main frame by two long springs. On the ends of this axle are two Steel gear cases, free to rock on the axle arms, and containing a train of hardened and ground gears running in oil, and driving the road wheel shafts at a purchase of 2 to 1 from the worm-driven differential in the axle pot. The balance beams allow any back wheel to rise or fall 2 ft. above or below its fellow on the same side without any cross twisting, while the system eliminates the short universal jointed shaft, radius and torque rods necessary on the orthodox six-wheelers; the purchase of 2 to 1 provided in the spur gears permits the worm-driven differential to run faster and under half the load of the ordinary worm-driven axle, a most vital point in a vehicle which may have to run for miles on its low gears, exerting an enormous tractive effort. The whole of the back axle mechanism is totally enclosed and absolutely watertight, and runs in oil. Since the balancing action takes place between the road wheels and the axle, the springs are not subjected to any violent Strain - in normal running, in fact, they hardly move at all.

Equipped with an engine giving 72 h.p. of a type which has given 7 years' exemplary service in the dust and heat of the Persian Oil-fields, and which in England is regularly hauling loads of 25 tons and over, the Scammell Rigid Six-wheeler has ample power for the most arduous conditions.

Instead of employing a 4-speed gear-box with an auxiliary gear-box behind it as on all other Rigid Six-wheelers, the Scammell has a specially designed 5-speed gear-box of massive construction and great efficiency. At no time has the power to pass through more than two pairs of wheels in the gear-box, whereas in the ordinary Rigid Six-wheeler most of the hard work has to be done with the auxiliary box in operation, and much power is wasted by passing through the four sets of gear wheels and Its shafts which this system involves. The Scammell gear-box also has only one change-speed lever, making the vehicle much more suitable for operation by unskilled labour.

Special attention has been paid to the braking; in addition to the handbrake operating in the road-wheel drums and a large pedal operated transmission brake, there is a small hand-lever acting on the transmission brake also. This can be applied with only the slightest effort, and is an enormous advantage when re-Starting on a severe gradient with a heavy load, and possibly a trailer in addition. An unskilled driver can make a clean "getaway" on a gradient of 1 in 3 without any danger of the vehicle running back, and this brake eliminates the enormous overloads on the axle-driving gear which may arise when using road-wheel brakes for re-starting on a hill, for in the Scammell the strains set up by letting in the clutch when the brake is still on, are confined to the gear-box, which is well able to withstand them.

As it is essential in a vehicle designed for operation in tropical countries, the radiator of the Scammell Rigid Six-wheeler has received special attention. It has wire wound tubes of the "Still" type, and gives such an enormous cooling surface that boiling is unknown. We may instance a Scammell Rigid Six-wheeler running in South Africa which covered 930 miles without any measurable loss of water in great heat and at altitudes varying from 2,000 to 5,000 ft. above sea-level, over a route on which other makes of Six-wheeled lorries boiled away 20 gallons of water in the first day's run.