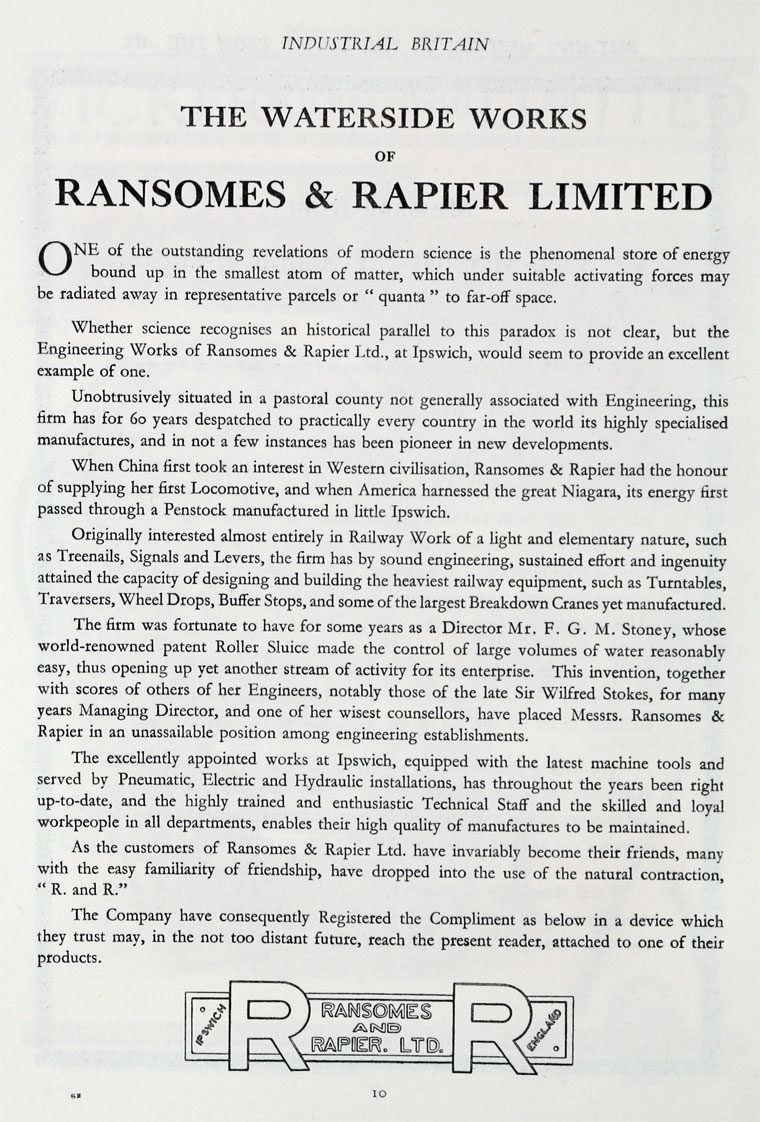 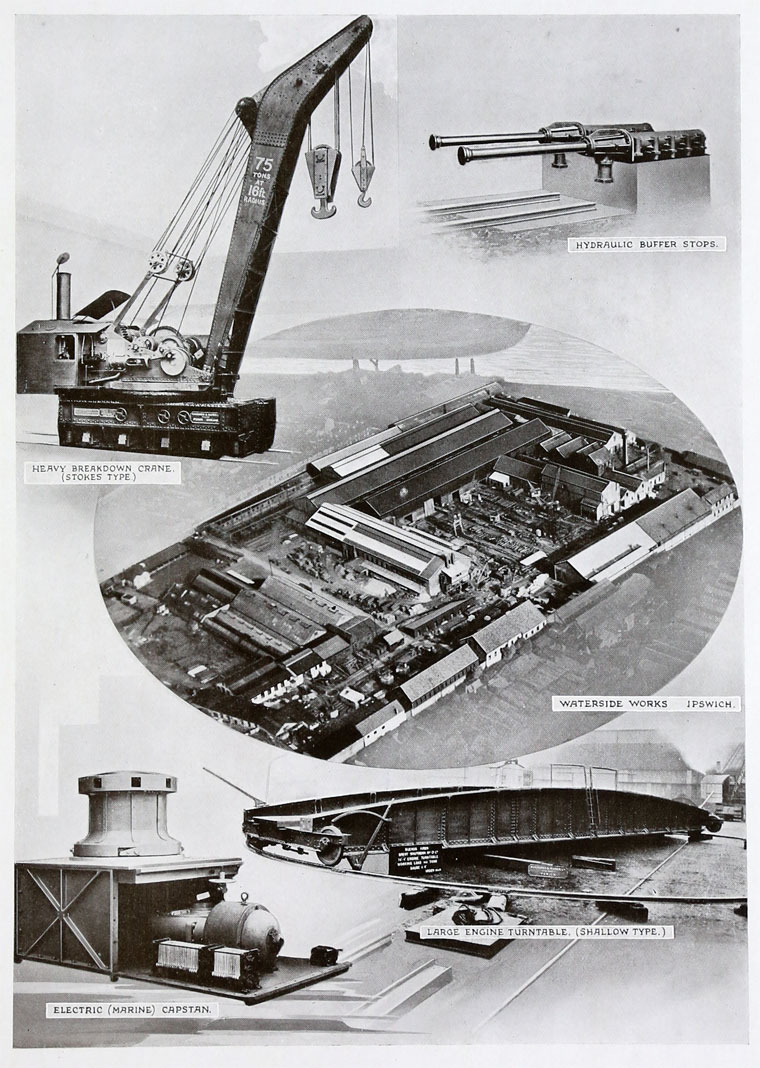 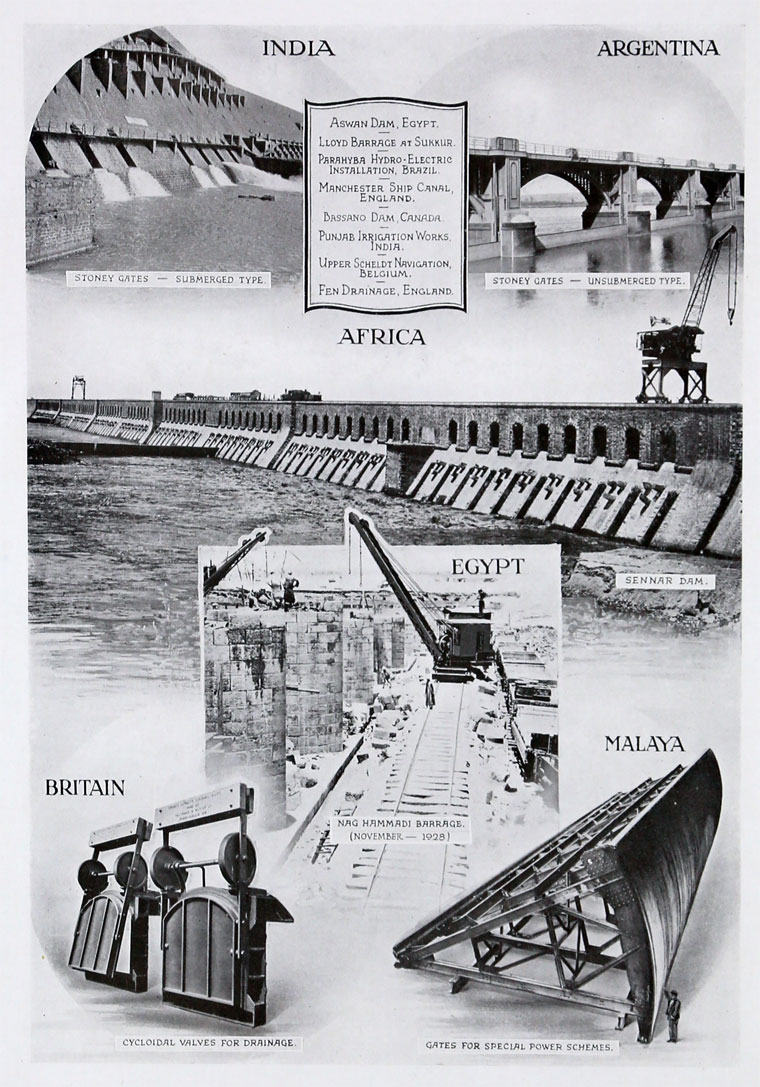 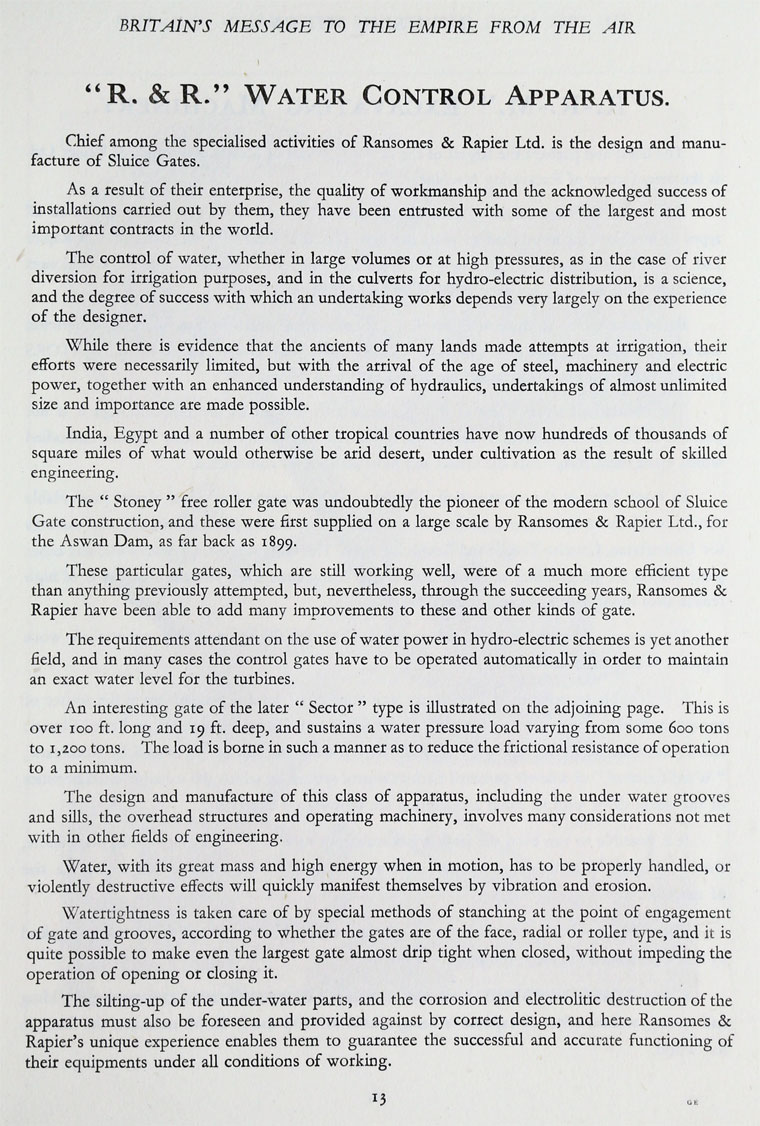 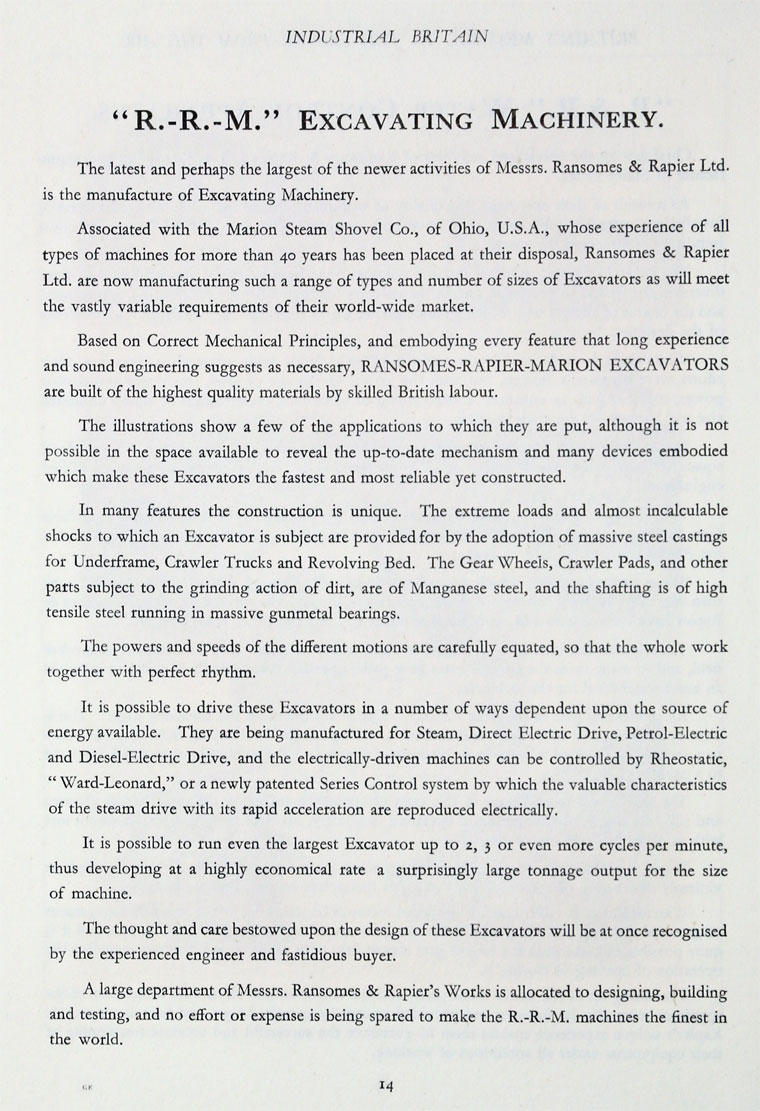 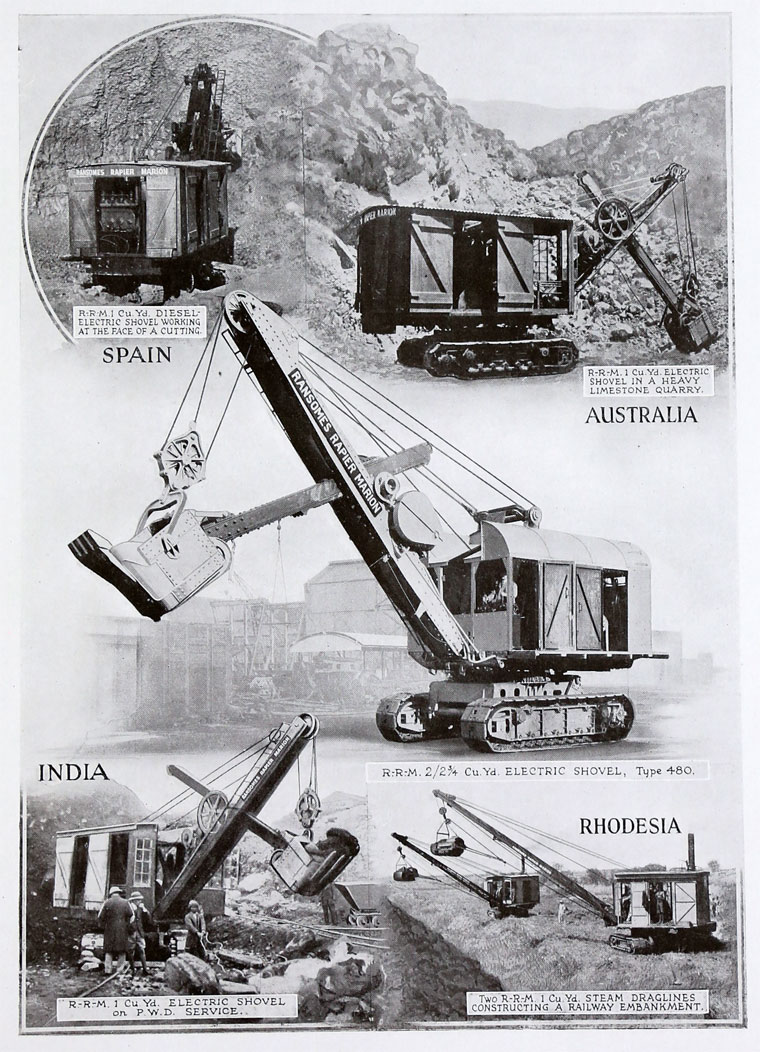 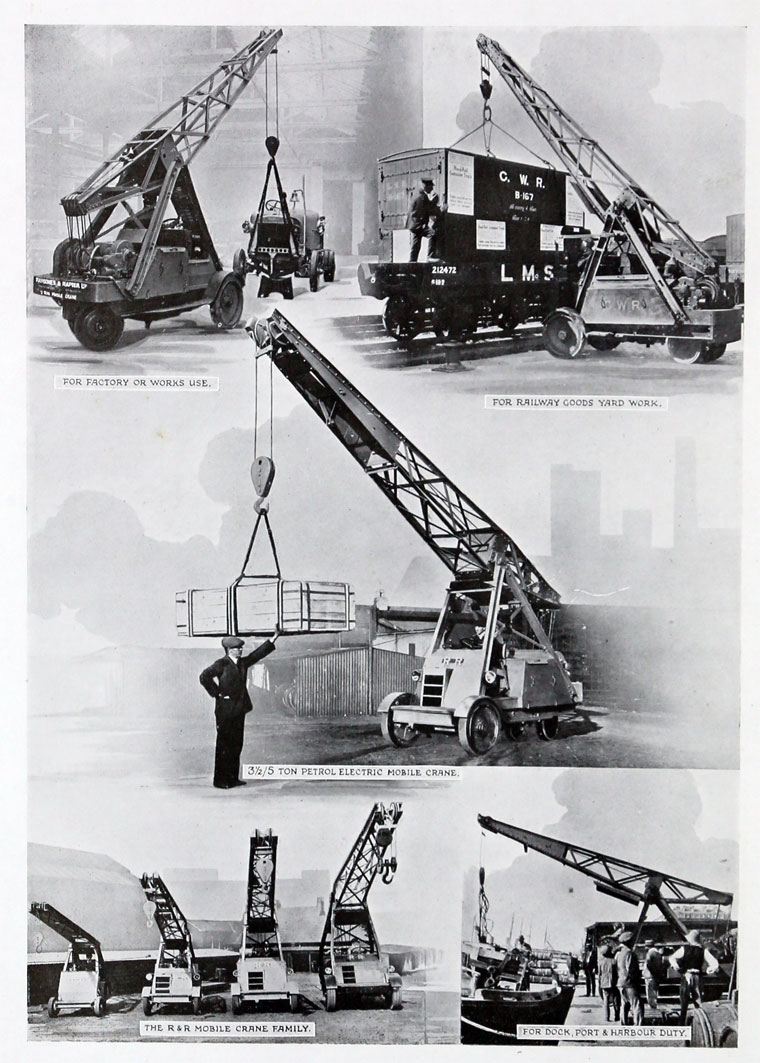 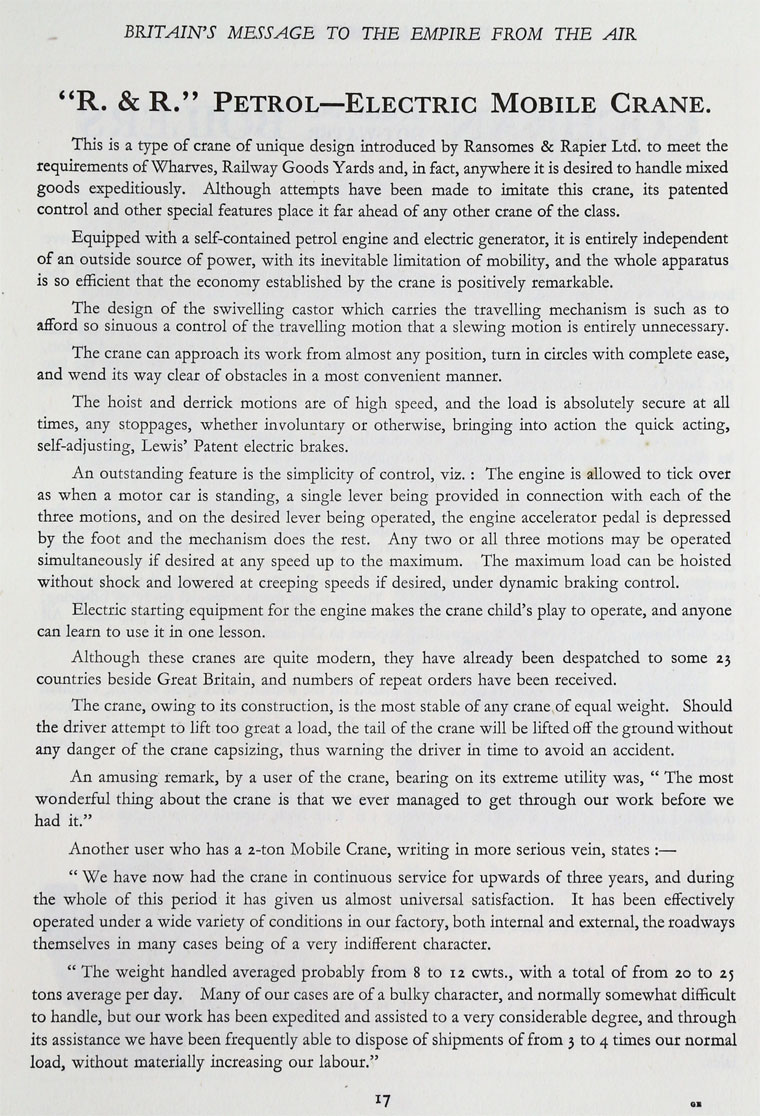 THE WATERSIDE WORKS OF RANSOMES and RAPIER LIMITED

One of the outstanding revelations of modern science is the phenomenal store of energy bound up in the smallest atom of matter, which under suitable activating forces may be radiated away M representative parcels or “quanta” to far-off space.

Whether science recognises an historical parallel to this paradox is not clear, but the Engineering Works of Ransomes and Rapier Ltd., at Ipswich, would seem to provide an excellent example of one.

Unobtrusively situated in a pastoral county not generally associated with Engineering, this firm has for 6o years despatched to practically every country in the world its highly specialised manufactures, and M not a few instances has been pioneer M new developments.

When China first took an interest in Western civilisation, Ransomes and Rapier had the honour of supplying her first Locomotive, and when America harnessed the great Niagara, its energy first passed through a Penstock manufactured in little Ipswich.

Originally interested almost entirely in Railway Work of a light and elementary nature, such as Treenails, Signals and Levers, the firm has by sound engineering, sustained effort and ingenuity attained t A capacity of designing and building the heaviest railway equipment, such as Turntables, Traversers, Wheel Drops, Buffer Stops, and some of the largest Breakdown Cranes yet manufactured.

The firm was fortunate to have for some years as a Director Mr. F. G. M. Stoney, whose world-renowned patent Roller Sluice made the control of large volumes of water reasonably easy, thus opening up yet another stream of activity for its enterprise. This invention, together with scores of others of her Engineers, notably those of the late Sir Wilfred Stokes, for many years Managing Director, and one of her wisest counsellors, have placed Messrs. Ransomes Rapier in an unassailable position among engineering establishments.

The excellently appointed works at Ipswich, equipped with the latest machine tools and served by Pneumatic, Electric and Hydraulic installations, As throughout the years been right up-to-date, and the highly trained and enthusiastic Technical Staff and the skilled and loyal workpeople in all departments, enables their high quality of manufactures to be maintained.

As the customers of Ransomes and Rapier Ltd. have invariably become their friends, many with the easy familiarity of friendship, have dropped into the use of the natural contraction, “R. and R."

The Company have consequently Registered the Compliment as below in a device which they trust may, in the not too distant future, reach the present reader, attached to one of their products.

Chief among the specialised activities of Ransomes and Rapier Ltd. is the design and manufacture of Sluice Gates.

As a result of their enterprise, the quality of workmanship and the acknowledged success of installations carried out by them, they have been entrusted with some of the largest and most important contracts in the world.

The control of water, whether in large volumes or at high pressures, as in the case of river diversion for irrigation purposes, and in the culverts for hydro-electric distribution, is a science, and the degree of success with which an undertaking works depends very largely on the experience of the designer.

While there is evidence that the ancients of many lands made attempts at irrigation, their efforts were necessarily limited, but with the arrival of the age of steel, machinery and electric power, together with an enhanced understanding of hydraulics, undertakings of almost unlimited size and importance are made possible.

India, Egypt and a number of other tropical countries have now hundreds of thousands of square miles of what would otherwise be arid desert, under cultivation as the result of skilled engineering.

The " Stoney " free roller gate was undoubtedly the pioneer of the modern school of Sluice Gate construction, and these were first supplied on a large scale by Ransomes and Rapier Ltd., for the Aswan Dam, as far back as 1899.

These particular gates, which arc still working well, were of a much more efficient type than anything previously attempted, but, nevertheless, through the succeeding years, Ransomes and Rapier have been able to add many improvements to these and other kinds of gate.

The requirements attendant on the use of water power in hydro-electric schemes is yet another field, and in many cases the control gates have to be operated automatically in order to maintain an exact water level for the turbines.

An interesting gate of the later “Sector" type is illustrated on the adjoining page. This is over 100 ft. long and 19 ft. deep, and sustains it water pressure load varying from some 600 tons to 1,200 tons. The load is borne in such a manner as to reduce the frictional resistance of operation to a minimum.

The design and manufacture of this class of apparatus, including the under water grooves and sills, the overhead structures and operating machinery, involves many considerations not met with in other fields of engineering.

Water, with its great mass and high energy when in motion, has to be properly handled, or violently destructive effects will quickly manifest themselves by vibration and erosion.

Watertightness is taken care of by special methods of stanching at the point of engagement of gate and grooves, according to whether the gates arc of the face, radial or roller type, and it is quite possible to make even the largest gate almost drip tight when closed, without impeding the operation of opening or closing it.

The silting-up of the under-water parts, and the corrosion and electrolitic destruction of the apparatus must also be foreseen and provided against by correct design, and here Ransomes and Rapier's unique experience enables them to guarantee the successful and accurate functioning of their equipments under Al conditions of working.

The latest and perhaps the largest of the newer activities of Messrs. Ransomes and Rapier Ltd. is the manufacture of Excavating Machine.

Associated with the Marion Steam Shovel Co., A Ohio, U.S.A., whose experience A Al types A machines for more than 4o years has been placed at their disposal, Ransomes and Rapier Ltd. arc now manufacturing such a range of types and number of sizes of Excavators as will meet the vastly variable requirements A their world-wide market.

Based on Correct Mechanical Principles, and embodying every feature that long experience and sound engineering suggests as necessary, RANSOMES-R APIER-MARION EXCAVATORS arc built of the highest quality materials by skilled British labour.

The illustrations show a few of the applications to which they are put, although it is not possible in the space available to reveal the up-to-date mechanism and many devices embodied which make these Excavators the fastest and most reliable yet constructed.

In many features the construction is unique. The extreme loads and almost incalculable shocks to which an Excavator is subject arc provided for by the adoption of massive steel castings for Underframe, Crawler Trucks and Revolving Bed. The Gear Wheels, Crawler Pads, and other parts subject to the grinding action of dirt, arc of Manganese steel, and the shafting is of high tensile steel running in massive gunmetal bearings.

The powers and speeds of the different motions are carefully equated, so that the whole work together with perfect rhythm.

It is possible to drive these Excavators in a number of ways dependent upon the source of energy available. They arc being manufactured for Steam, Direct Electric Drive, Petrol-Electric and Diesel-Electric Drive, and the electrically-driven machines can be controlled by Rheostatic, " Ward-Lconard," or a newly patented Series Control system by which the valuable characteristics A the steam drive with its rapid acceleration arc reproduced electrically.

It is possible to run even the largest Excavator up to z, 3 or even more cycles per minute, thus developing at a highly economical rate a surprisingly large tonnage output for the size of machine.

The thought and care bestowed upon the design of these Excavators will be at once recognised by the experienced engineer and fastidious buyer.

A large department of Messrs. Ransomes and Rapier's Works is allocated to designing, building and testing, and no effort or expense is being spared to make the R.-R.-M. machines the finest in the world.

This is a type of crane of unique design introduced by Ransomes and Rapier Ltd. to meet the requirements of Wharves, Railway Goods Yards and, in fact, anywhere it is desired to handle mixed goods expeditiously. Although attempts have been made to imitate this crane, its patented control and other special features place it far ahead of any other crane of the class.

Equipped with a self-contained petrol engine and electric generator, it is entirely independent of an outside source of power, with its inevitable limitation of mobility, and the whole apparatus is so efficient that the economy established by the crane is positively remarkable.

The crane can approach its work from almost any position, turn in circles with complete ease, and wend its way clear of obstacles in a most convenient manner.

The hoist and derrick motions are of high speed, and the load is absolutely secure at all times, any stoppages, whether involuntary or otherwise, bringing into action the quick acting, self-adjusting, Lewis' Patent electric brakes.

An outstanding feature is the simplicity of control, viz.: The engine is allowed to tick over as when a motor car is standing, a single lever being provided in connection with each of the three motions, and on the desired lever being operated, the engine accelerator pedal is depressed by the foot and the mechanism does the rest. Any two or all three motions may be operated simultaneously if desired at any speed up to the maximum. The maximum load can be hoisted without shock and lowered at creeping speeds if desired, under dynamic braking control.

Electric starting equipment for the engine makes the crane child's play to operate, and anyone can learn to use it in one lesson.

Although these cranes arc quite modern, they have already been despatched to some 23 countries beside Great Britain, and numbers of repeat orders have been received.

The crane, owing to its construction, is the most stable of any crane of equal weight. Should the driver attempt to lift too great a load, the tail of the crane will be lifted off the ground without any danger of the crane capsizing, thus warning the driver in time to avoid an accident.

An amusing remark, by a user of the crane, bearing on its extreme utility was, "Ti,, most wonderful thing about the crane is that we ever managed to get through our work before we had it."

Another user who has a 2-ton Mobile Crane, writing in more serious vein, states: -

"We have now had the crane in continuous service for upwards of three years, and during the whole of this period it has given us almost universal satisfaction. It has been effectively operated under a wide variety of conditions in our factory, both internal and external, the roadways themselves in many cases being of a very indifferent character.

"The weight handled averaged probably from 8 to 12 cwts., with a total of from 20 to 25 tons average per day. Many of our cases are of a bulky character, and normally somewhat difficult to handle, but our work has been expedited and assisted to a very considerable degree, and through its assistance we have been frequently able to dispose of shipments of from 3 to 4 times our normal load, without materially increasing our labour."