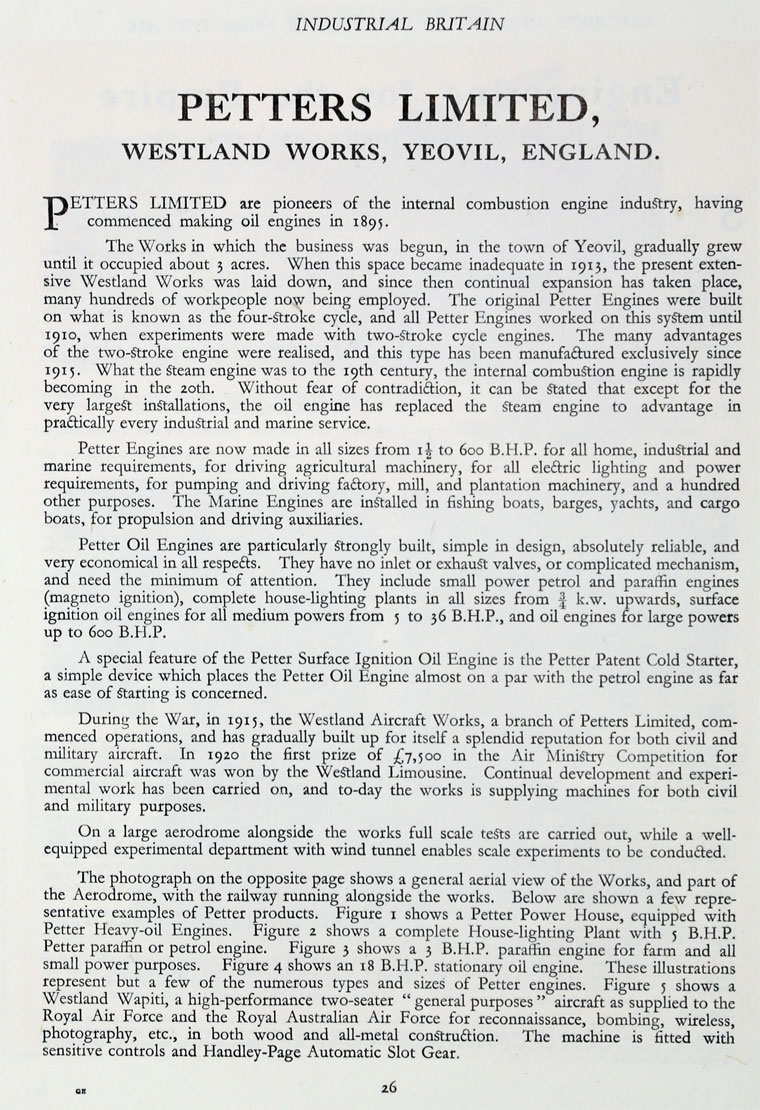 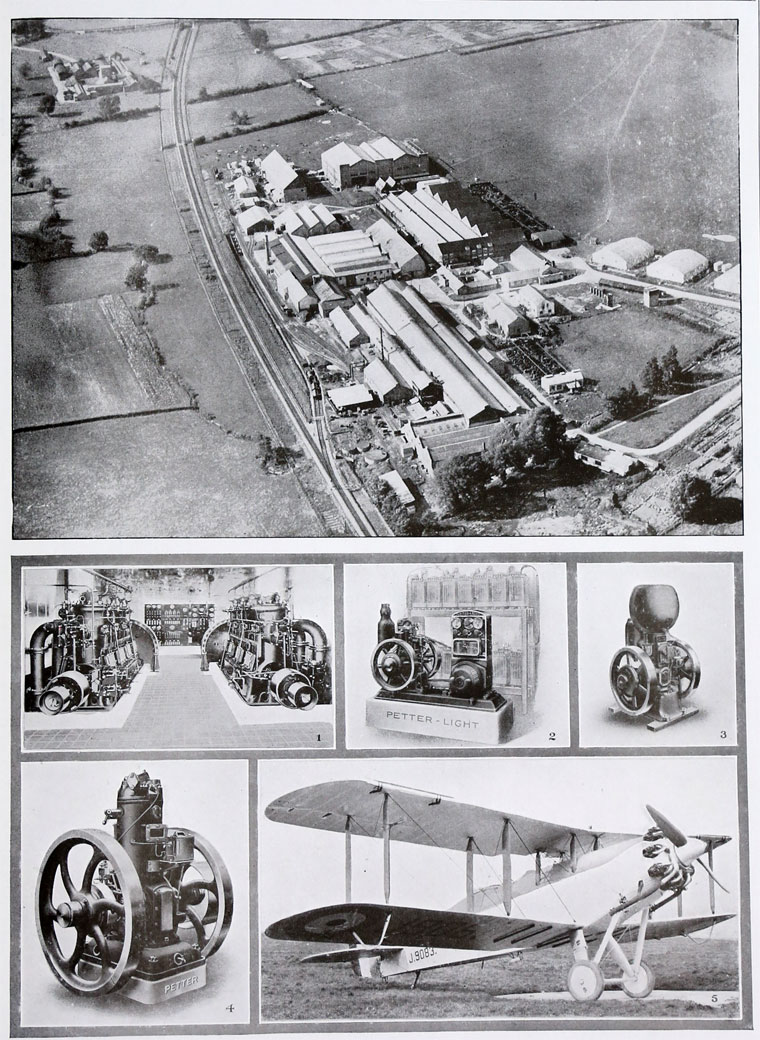 The Works in which the business was begun, in the town of Yeovil, gradually grew until it occupied about 3 acres. When this space became inadequate in 1913, the present extensive Westland Works was laid down, and since then continual expansion has taken place, many hundreds of workpeople now being employed. The original Petter Engines were built on what is known as the four-stroke cycle, and all Petter Engines worked on this system until 191o, when experiments were made with two-stroke cycle engines. The many advantages of the two-Stroke engine were realised, and this type has been manufactured exclusively since 1915. What the Steam engine was to the 19th century, the internal combustion engine is rapidly becoming in the 20th. Without fear of contradiction, it can be stated that except for the very largest installations, the oil engine has replaced the steam engine to advantage in practically every industrial and marine service.

Petter Engines arc now made in all sizes from 1.5 to 600 B.H.P. for all home, industrial and marine requirements, for driving agricultural machinery, for all electric lighting and power requirements, for pumping and driving factory, mill, and plantation machinery, and a hundred other purposes. The Marine Engines arc installed in fishing boats, barges, yachts, and cargo boats, for propulsion and driving auxiliaries.

Pater Oil Engines are particularly strongly built, simple in design, absolutely reliable, and very economical in all respells. They have no inlet or exhaust valves, or complicated mechanism, and need the minimum of attention. They include small power petrol and paraffin engines (magneto ignition), complete house-lighting plants in all sizes from k.w. upwards, surface Ignition oil engines for all medium powers from 5 to 36 B.H.P., and oil engines for large powers up to 60o B.H.P.

A special feature of the Petter Surface Ignition Oil Engine is the Petter Patent Cold Starter, a simple device which places the Petter Oil Engine almost on a par with the petrol engine as far as ease of starting is concerned.

During the War, in 1915, the Westland Aircraft Works, a branch of Petters Limited, commenced operations, and has gradually built up for itself a splendid reputation for both civil and military aircraft. In 1920 the first prize of £7,500 in the Air Ministry Competition for commercial aircraft was won by the Westland Limousine. Continual development and experimental work has been carried on, and to-day the works is supplying machines for both civil and military purposes.

On a large aerodrome alongside the works full scale teas are carried out, while a well- equipped experimental department with wind tunnel enables scale experiments to be concluded.

The photograph on the opposite page shows a general aerial view of the Works, and part of the Aerodrome, with the railway running alongside the works. Below arc shown a few representative examples of Petter products. Figure shows a Petter Power House, equipped with Petter Heavy-oil Engines. Figure z shows a complete House-lighting Plant with 5 B.H.P. Pater paraffin or petrol engine. Figure 3 shows a 3 B.H.P. paraffin engine for farm and all small power purposes. Figure 4 shows an 18 B.H.P. stationary oil engine. These illustrations represent but a few of the numerous types and sizes of Petter engines. Figure I shows a Westland Wapiti, a high-performance two-seater "general purposes" aircraft as supplied to the Royal Air Force and the Royal Australian Air Force for reconnaissance, bombing, wireless, photography, etc., in both wood and all-metal construction. The machine is fitted with sensitive controls and Handley-Page Automatic Slot Gear.