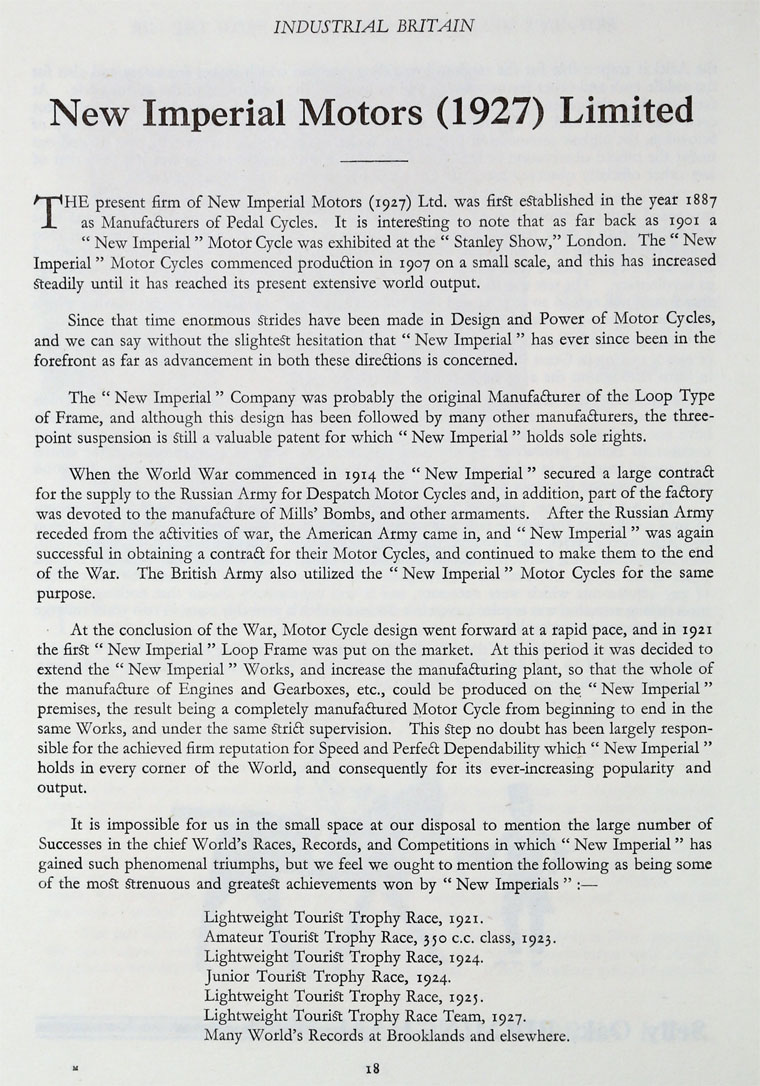 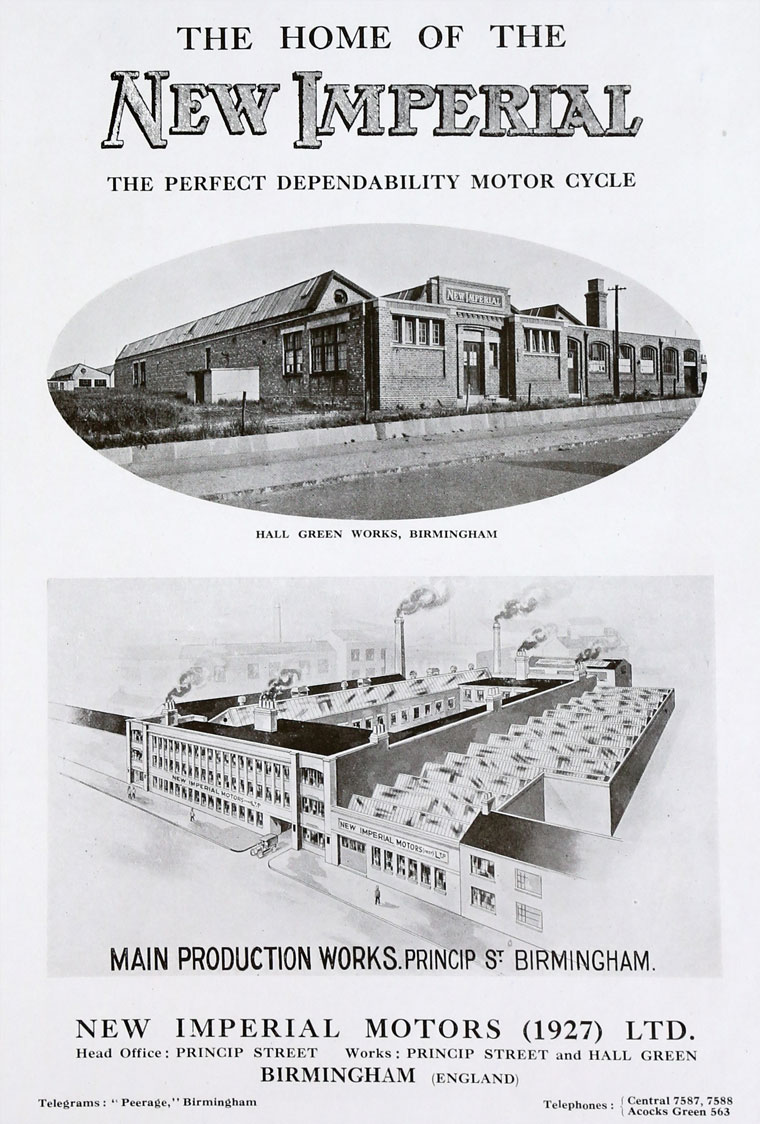 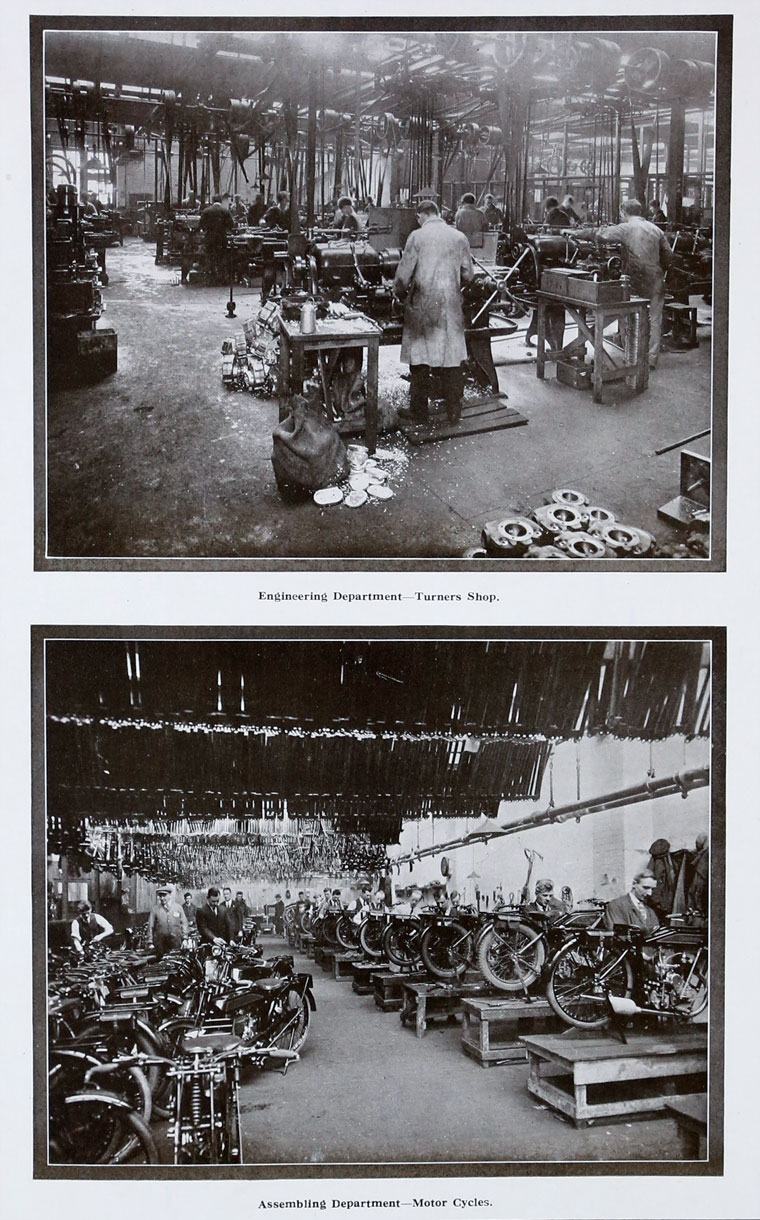 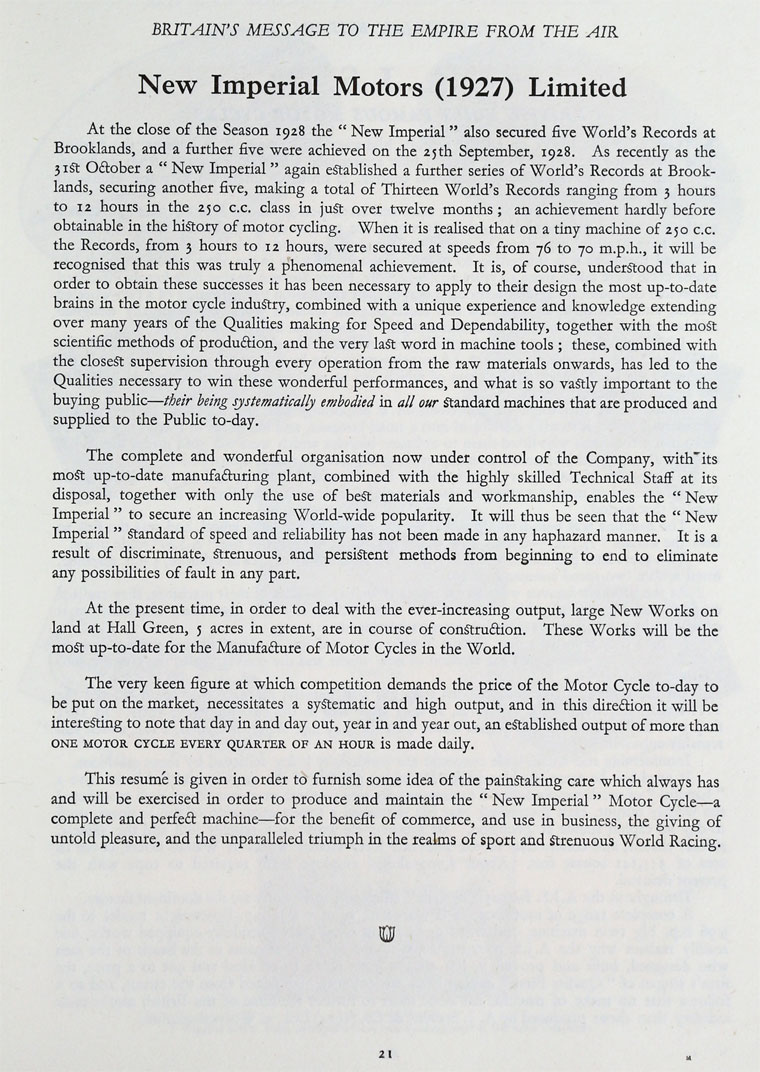 The present firm of New Imperial Motors (1927) Ltd. was first established in the year 1887 as Manufacturers of Pedal Cycles. It is interesting to note that as far back as 1901 a "New Imperial" Motor Cycle was exhibited at the "Stanley Show," London. The "New Imperial" Motor Cycles commenced production in 1907 on a small scale, and this has increased steadily until it has reached its present extensive world output.

Since that time enormous strides have been made in Design and Power of Motor Cycles, and we can say without the slightest hesitation that "New Imperial" has ever since been in the forefront as far as advancement in both these directions is concerned.

The "New Imperial" Company was probably the original Manufacturer of the Loop Type of Frame, and although this design has been followed by many other manufacturers, its three-point suspension is still a valuable patent for which "New Imperial " holds sole rights.

At the conclusion of the War, Motor Cycle design went forward at a rapid pace, and in 1921 the first "New Imperial" Loop Frame was put on the market. At this period it was decided to extend the "New Imperial" Works, and increase the manufacturing plant, to that the whole of the manufacture of Engines and Gearboxes, etc., could be produced on the "New Imperial" premises, the result being a completely manufactured Motor Cycle from beginning to end in the same Works, and under the same Strict supervision. This Step no doubt has been largely responsible for the achieved firm reputation for Speed and Perfect Dependability which "New Imperial" holds in every corner of the World, and consequently for its ever-increasing popularity and output.

It is impossible for us in the small space at our disposal to mention the large number of Successes in the chief World's Races, Records, and Competitions in which "New Imperial" has gained such phenomenal triumphs, but we feel we ought to mention the following as being some of the most strenuous and greatest achievements won by "New Imperials":

At the close of the Season 1928 the "New Imperial" also secured five World's Records at Brooklands, and a further five were achieved on the 25th September, 1928. As recently as the 31st October a "New Imperial" again established a further series of World's Records at Brooklands, securing another five, making a total of Thirteen World's Records ranging from 3 hours to 12 hours in the 250 c.c. class in just over twelve months; an achievement hardly before obtainable in the history of motor cycling. When it is realised that on a tiny machine of 250 c.c. the Records, from 3 hours to 12 hours, were secured at speeds from 76 to 70 m.p.h., it will be recognised that this was truly a phenomenal achievement. It is, of course, understood that in order to obtain these successes it has been necessary to apply to their design the most up-to-date brains in the motor cycle industry, combined with a unique experience and knowledge extending over many years of the Qualities making for Speed and Dependability, together with the most scientific methods of production, and the very last word in machine tools; these, combined with the closest supervision through every operation from the raw materials onwards, has led to the Qualities necessary to win these wonderful performances, and what is so vastly important to the buying public - their being systematically embodied in all our Standard machines that are produced and supplied to the Public to-day.

The complete and wonderful organisation now under control of the Company, with its most up-to-date manufacturing plant, combined with the highly skilled Technical Staff at its disposal, together with only the use of best materials and workmanship, enables the "New Imperial" to secure an increasing World-wide popularity. It will thus be seen that the "New Imperial" Standard of speed and reliability has not been made in any haphazard manner. It is a result of discriminate, strenuous, and persistent methods from beginning to end to eliminate any possibilities of fault in any part.

At the present time, in order to deal with the ever-increasing output, large New Works on land at Hall Green, 5 acres in extent, are in course of construction. These Works will be the most up-to-date for the Manufacture of Motor Cycles in the World.

The very keen figure at which competition demands the price of the Motor Cycle to-day to be put on the market, necessitates a systematic and high output, and in this direction it will be interesting to note that day in and day out, year in and year out, an established output of more than ONE MOTOR CYCLE EVERY QUARTER OF AN HOUR is made daily.

This resume is given in order to furnish some idea of the painstaking care which always has and will be exercised in order to produce and maintain the "New Imperial" Motor Cycle - a complete and perfect machine - for the benefit of commerce, and use in business, the giving of untold pleasure, and the unparalleled triumph in the realms of sport and Strenuous World Racing.