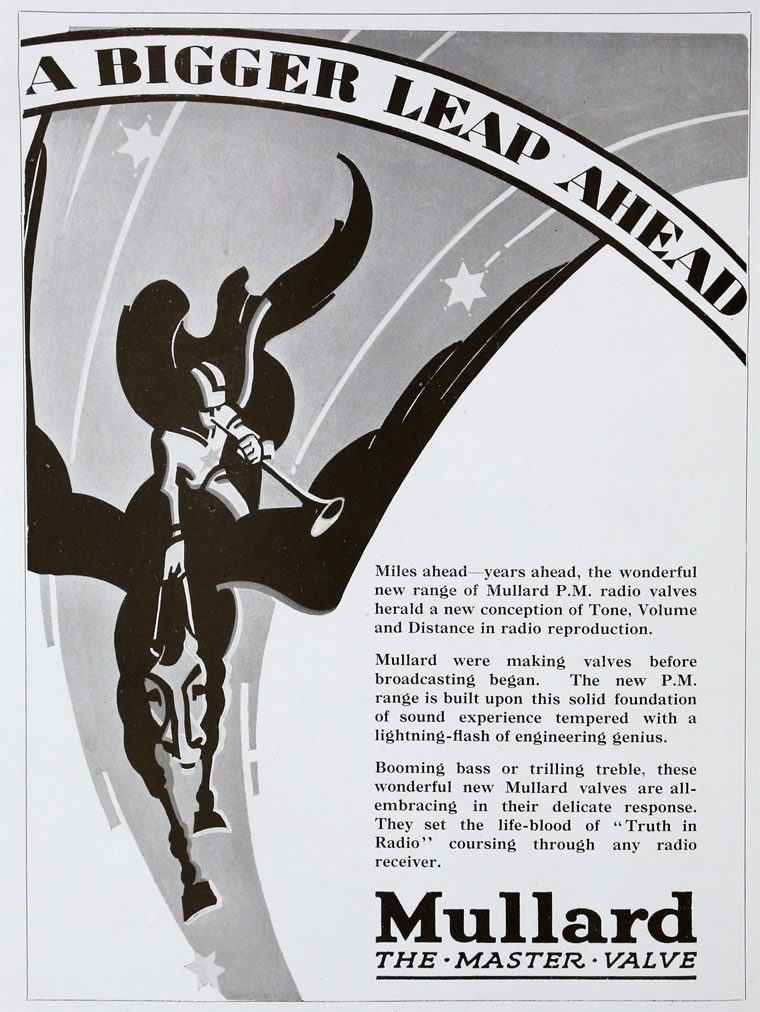 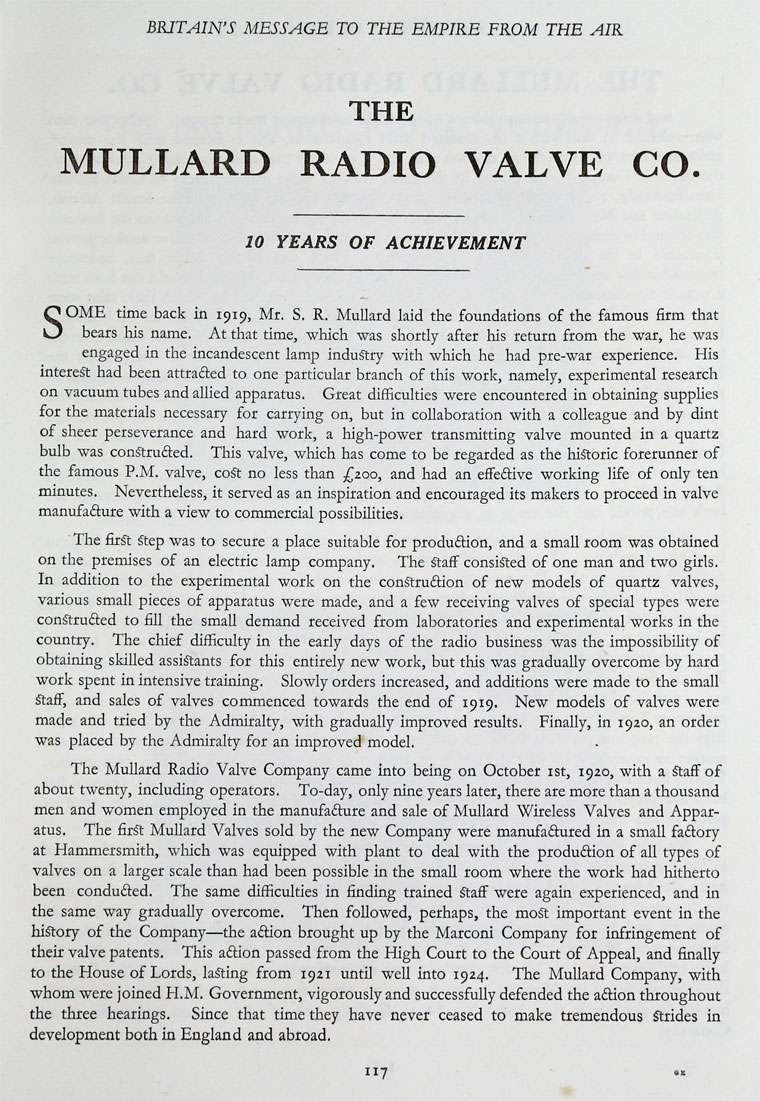 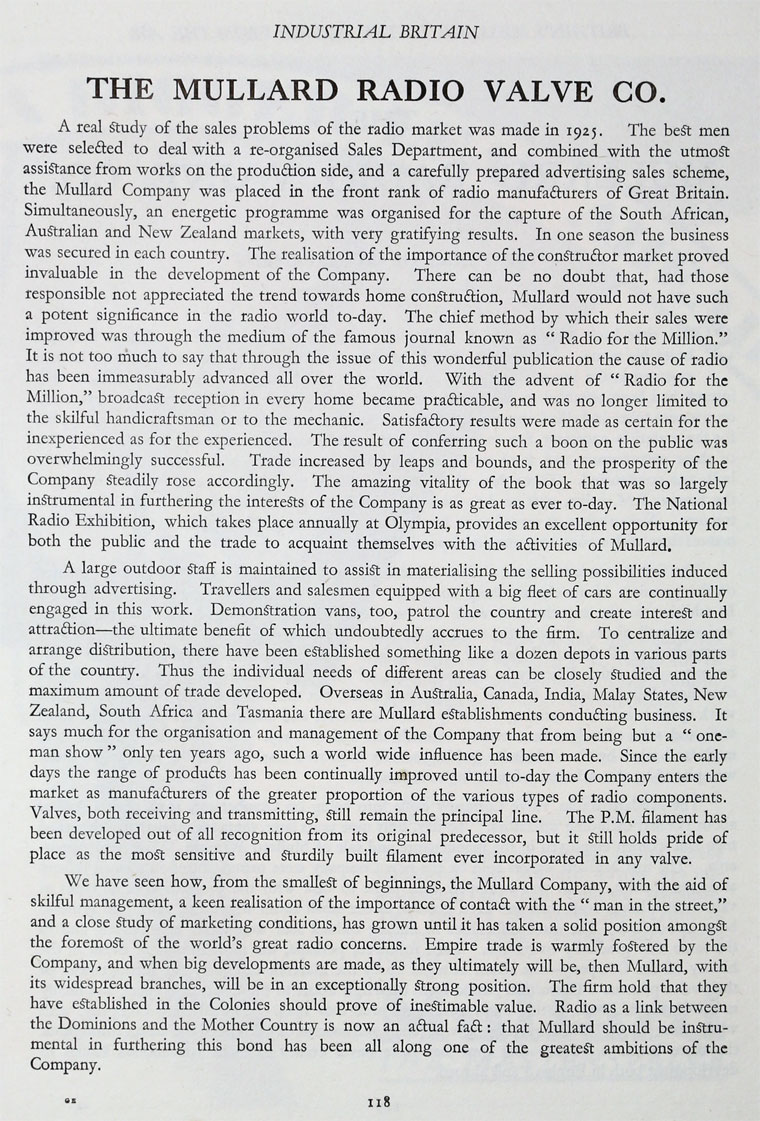 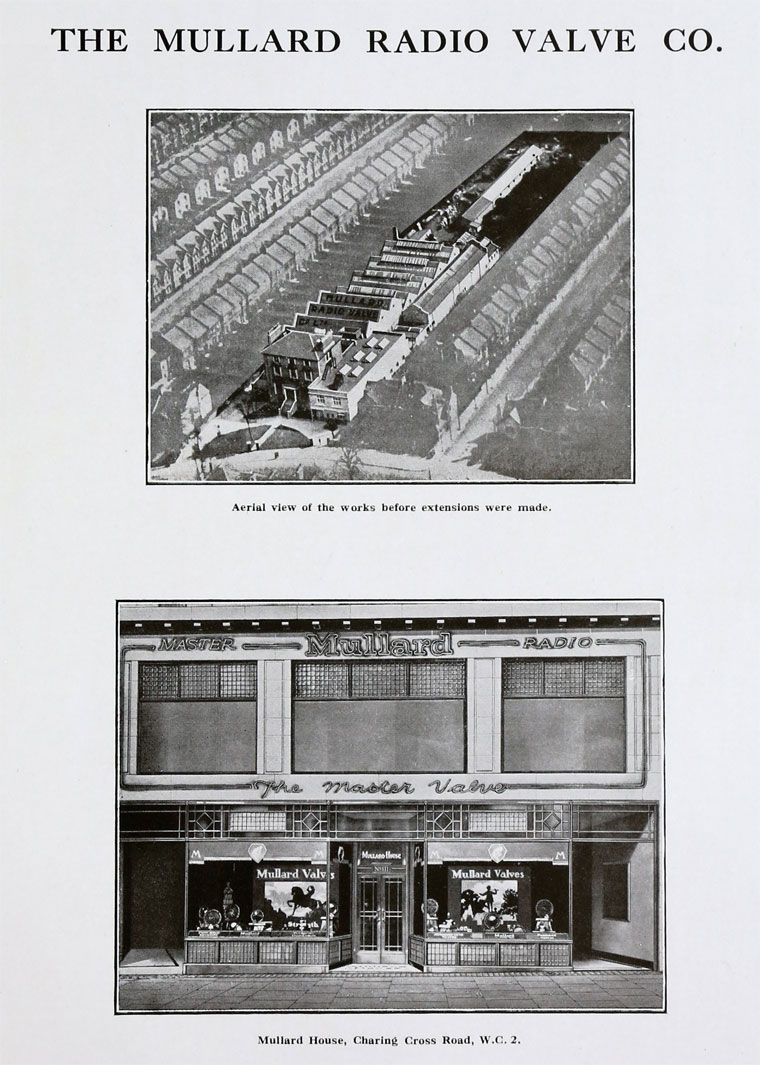 SOME time back in 1919, Mr. S. R. Mullard laid the foundations of the famous firm that bears his name. At that time, which was shortly after his return from the war, he was engaged in the incandescent lamp industry with which he had pre-war experience. His interest had been attracted to one particular branch of this work, namely, experimental research on vacuum tubes and allied apparatus. Great difficulties were encountered in obtaining supplies for the materials necessary for carrying on, but in collaboration with a colleague and by dint of sheer perseverance and hard work, a high-power transmitting valve mounted in a quartz bulb was constructed. This valve, which has come to be regarded as the historic forerunner of the famous P.M. valve, cost no less than £200, and had an effective working life of only ten minutes. Nevertheless, it served as an inspiration and encouraged its makers to proceed in valve manufacture with a view to commercial possibilities.

The first step was to secure a place suitable for produ6tion, and a small room was obtained on the premises of an electric lamp company. The staff consisted of one man and two girls. In addition to the experimental work on the construction of new models of quartz valves, various small pieces of apparatus were made, and a few receiving valves of special types were constructed to fit the small demand received from laboratories and experimental works in the country. The chief difficulty in the early days of the radio business was the impossibility of obtaining skilled assistants for this entirely new work, but this was gradually overcome by hard work spent in intensive training. Slowly orders increased, and additions were made to the small Staff, and sales of valves commenced towards the end of 1919. New models of valves were made and tried by the Admiralty, with gradually improved results. Finally, in 1920, an order was placed by the Admiralty for an improved model.

The Mullard Radio Valve Company came into being on October 1st, 1920, with a staff of about twenty, including operators. To-day, only nine years later, there are more than a thousand men and women employed in the manufacture and sale of Mullard Wireless Valves and Apparatus. The first Mullard Valves sold by the new Company were manufactured in a small factory at Hammersmith, which was equipped with plant to deal with the production of all types of valves on a larger scale than had been possible in the small room where the work had hitherto been conducted. The same difficulties in finding trained staff were again experienced, and in the same way gradually overcome. Then followed, perhaps, the most important event in the history of the Company - the action brought up by the Marconi Company for infringement of their valve patents. This action passed from the High Court to the Court of Appeal, and finally to the House of Lords, lasting from 1921 until well into 1924. The Mullard Company, with whom were joined H.M. Government, vigorously and successfully defended the action throughout the three hearings. Since that time they have never ceased to make tremendous Strides in development both in England and abroad.

A real study of the sales problems of the radio market was made in 1915. The best men were selected to deal with a re-organised Sales Department, and combined with the utmost assistance from works on the production side, and a carefully prepared advertising sales scheme, the Mullard Company was placed in the front rank of radio manufacturers of Great Britain. Simultaneously, an energetic programme was organised for the capture of the South African, Australian and New Zealand markets, with very gratifying results. In one season the business was secured in each country. The realisation of the importance of the constructor market proved invaluable in the development of the Company. There can be no doubt that, had those responsible not appreciated the trend towards home construction, Mullard would not have such a potent significance in the radio world to-day. The chief method by which their sales were improved was through the medium of the famous journal known as "Radio for the Million." It is not too much to say that through the issue of this wonderful publication the cause of radio has been immeasurably advanced all over the world. With the advent of "Radio for the Million," broadcast reception in every home became practicable, and was no longer limited to the skilful handicraftsman or to the mechanic. Satisfactory results were made as certain for the inexperienced as for the experienced. The result of conferring such it boon on the public was overwhelmingly successful. Trade increased by leaps and bounds, and the prosperity of the Company Steadily rose accordingly. The amazing vitality of the book that was so largely instrumental in furthering the interests of the Company is as great as ever to-day. The National Radio Exhibition, which takes place annually at Olympia, provides an excellent opportunity for both the public and the trade to acquaint themselves with the activities of Mullard.

A large outdoor Staff is maintained to assist in materialising the selling possibilities induced through advertising. Travellers and salesmen equipped with a big fleet of cars are continually engaged in this work. Demonstration vans, too, patrol the country and create interest and attraction - the ultimate benefit of which undoubtedly accrues to the firm. To centralize and arrange distribution, there have been established something like a dozen depots in various parts of the country. Thus the individual needs of different areas can be closely studied and the maximum amount of trade developed.

Overseas in Australia, Canada, India, Malay States, New Zealand, South Africa and Tasmania there are Mullard establishments conducting business. It says much for the organisation and management of the Company that from being but a "one-man show" only ten years ago, such a world wide influence has been made. Since the early days the range of produ6ls has been continually improved until to-day the Company enters the market as manufacturers of the greater proportion of the various types of radio components. Valves, both receiving and transmitting, still remain the principal line. The P.M. filament has been developed out of all recognition from its original predecessor, but it gill holds pride of place as the most sensitive and sturdily built filament ever incorporated in any valve.

We have seen how, from the smallest of beginnings, the Mullard Company, with the aid of skilful management, it keen realisation of the importance of contact with its "man in the street," and it close study of marketing conditions, has grown until it has taken a solid position amongst, the foremost of the world's great radio concerns. Empire trade is warmly fostered by the Company, and when big developments are made, as they ultimately will be, then Mullard, with its widespread branches, will be in an exceptionally Strong position. The firm hold that they have established in the Colonies should prove of inestimable value. Radio as it link between the Dominions and the Mother Country is now an actual fact: that Mullard should be instrumental in furthering this bond has been all along one of the greatest ambitions of the Company.