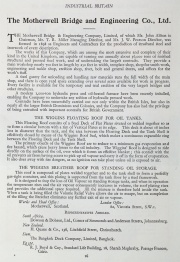 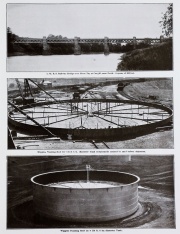 Motherwell Bridge and Engineering Company, Limited, of which Mr. John Alston is Chairman, Mr. T. R. Miller Managing Director, and Mr. J. W. Pearson Director, was formed in 1898 as Engineers and Contractors for the production of Structural Steel and ironwork of every description.

The works of this Company, which are among the most extensive and complete of their kind in the United Kingdom, are capable of turning out annually about 36,000 tons of finished structural and pressed steel work, and of undertaking the largest contracts. They provide a main workshop nearly 700 feet in length by 250 feet in width, template shop, shop for smith work, engineering and tackle shop, erect ion shop, rivet, bolt and general Mores, and offices for the work's Staff.

A Steel gantry for unloading and handling raw materials runs the full width of the main shop, and there is open yard space extending over several acres available for work in progress. Every facility is available for the temporary and trial erect ion of the very largest bridges and other structures.

A modern 1,000-ton hydraulic press and oil-heated furnace have been recently installed, enabling the Company to undertake any section of hydraulic pressed work.

Contracts have been successfully carried out not only within the British Isles, but also in nearly all the larger British Dominions and Colonies, and the Company has also had the privilege of being entrusted with important contracts for British Government.

The primary objects of the Wiggins Roof are to reduce to a minimum gas evaporation and fire hazard, which cause heavy losses to the oil industry. The Wiggins' Roof is designed to ride directly on the surface of the oil, over which it forms an effective blanket; this contact with the oil prevents air from having access to pick up oil vapour and carry it off in the form of evaporation. It also does away with fire dangers, as no ignition can take place unless oil is exposed to air.

This roof is composed of plates welded together and to the tank shell to form a perfectly gas-tight container, and this plating is supported from the tank floor by a steel framework.

It is designed to stop the loss of Oil Vapour on standing storage mks, and when in operation the temperature rises and the air vapour consequently increases in volume, the roof plating rises and provides the additional space required. All the mixture is therefore held inside the tank. When a tank is being filled the Volume Relief Valve allows the air to escape, but on completion of the filling the Breather eliminates any further exit of air or vapour.