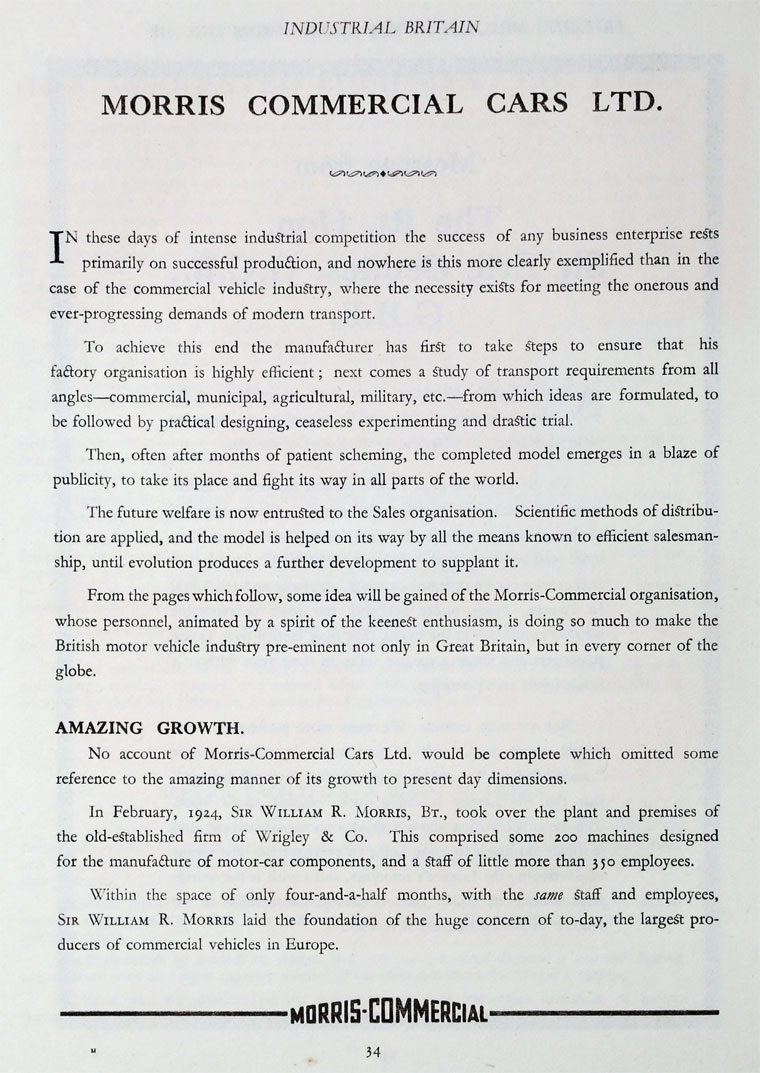 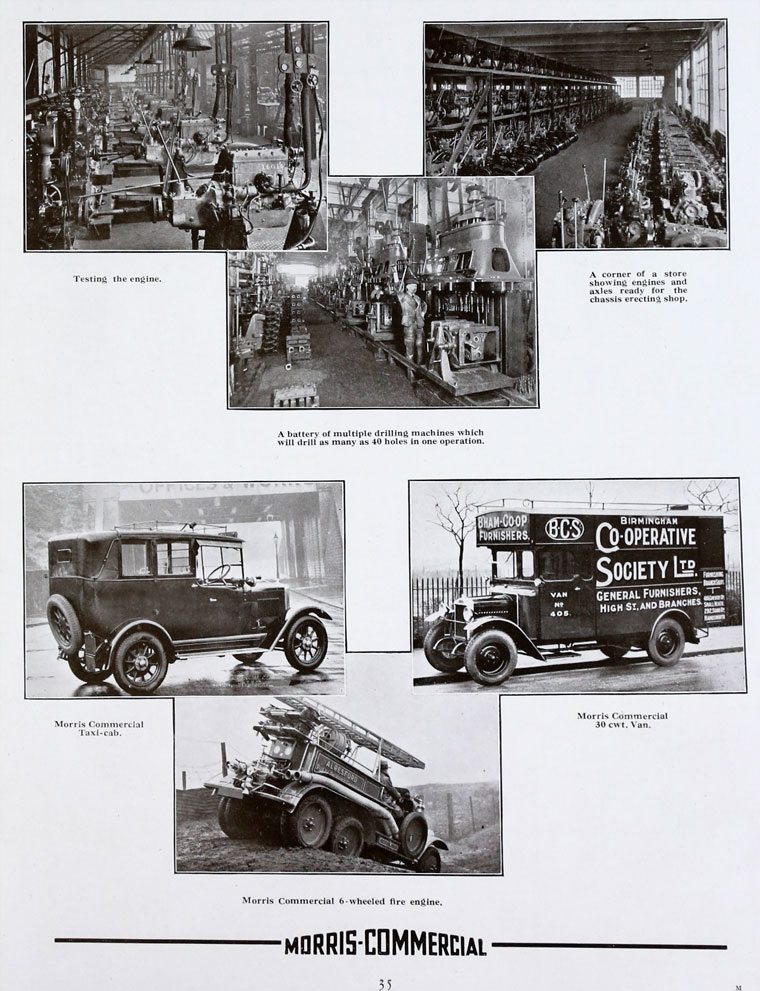 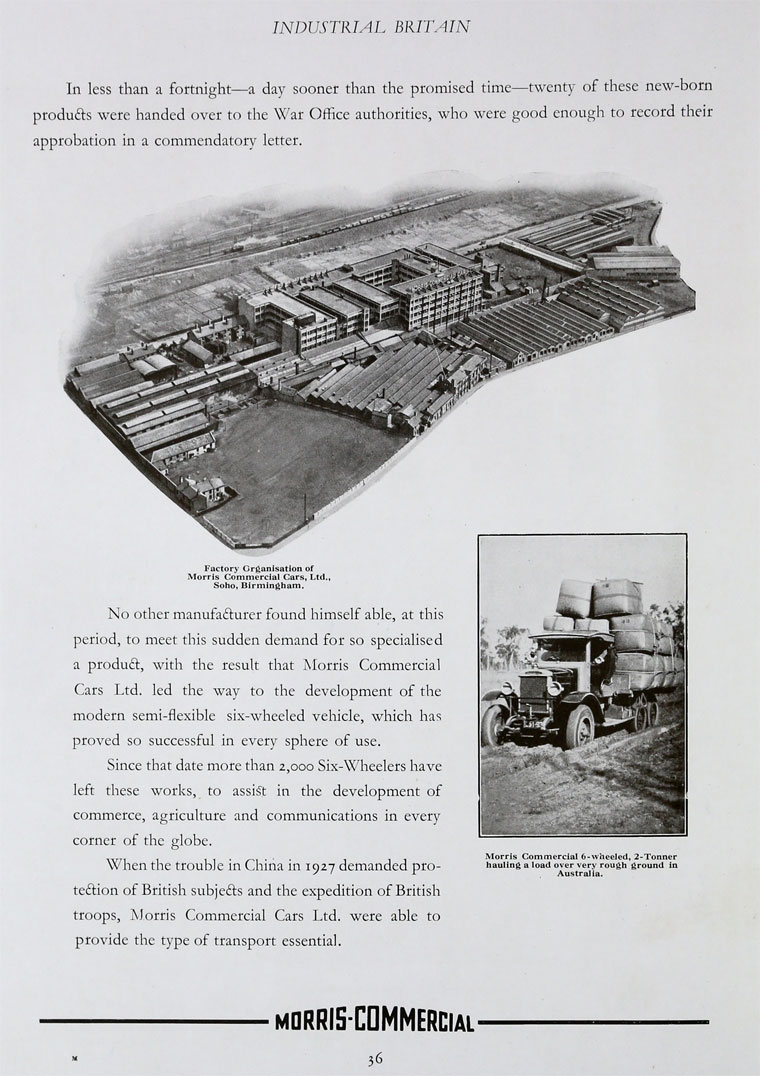 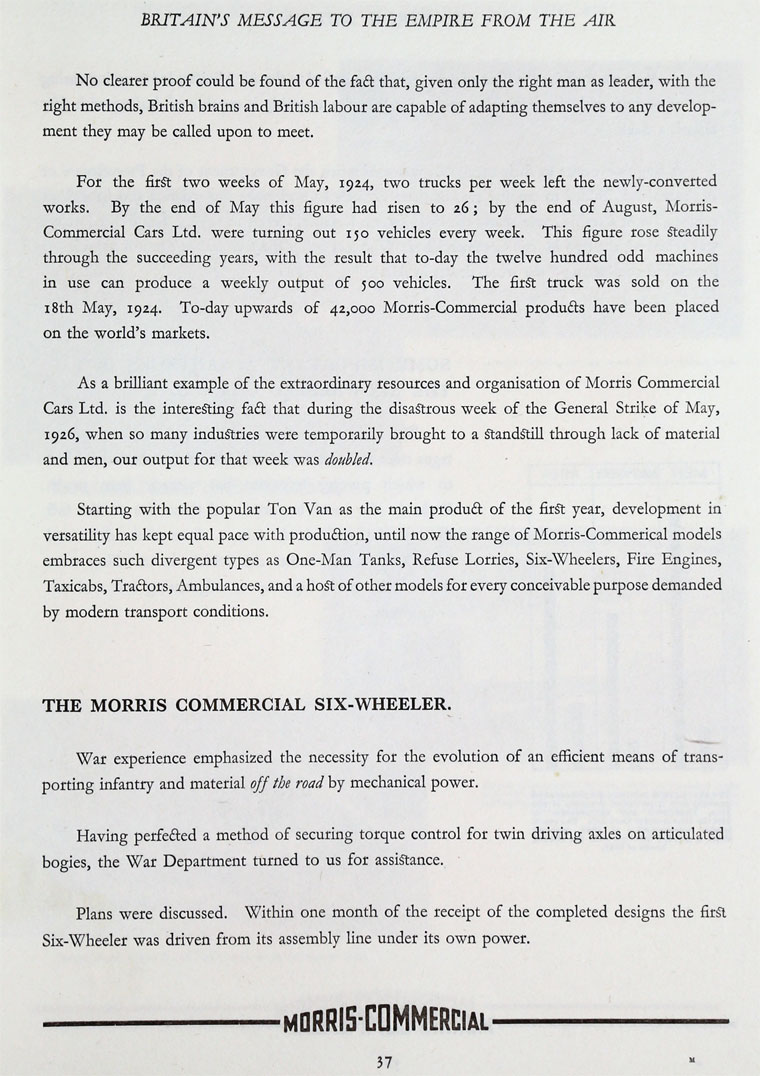 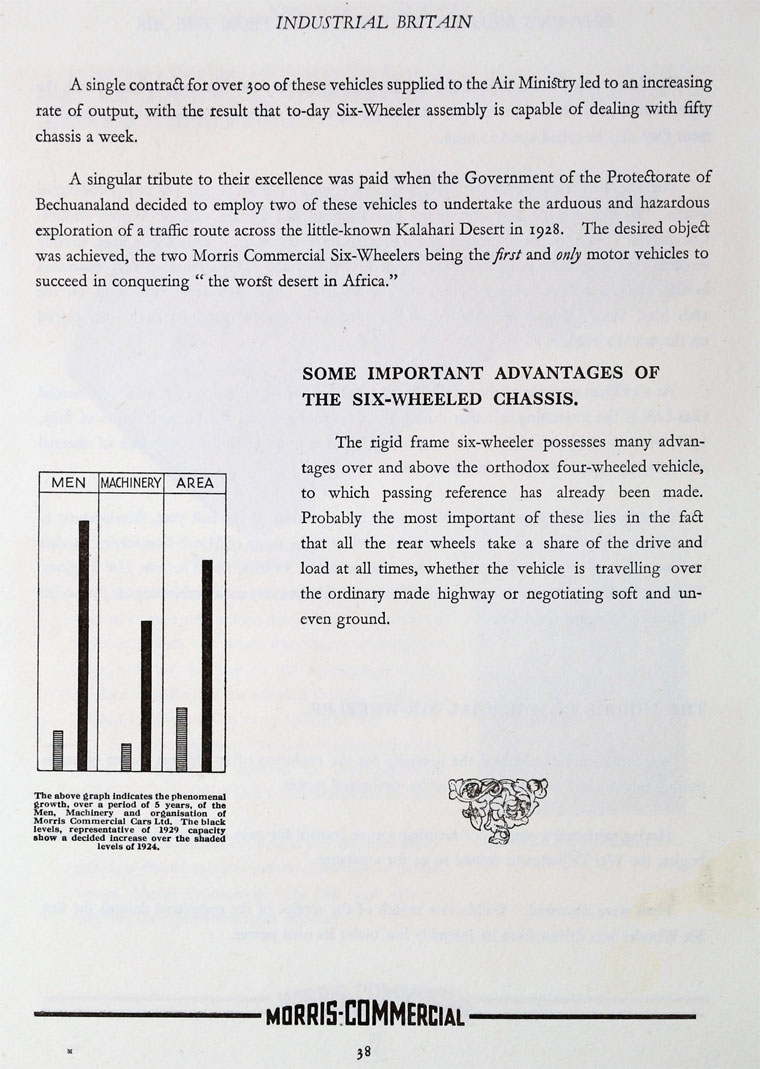 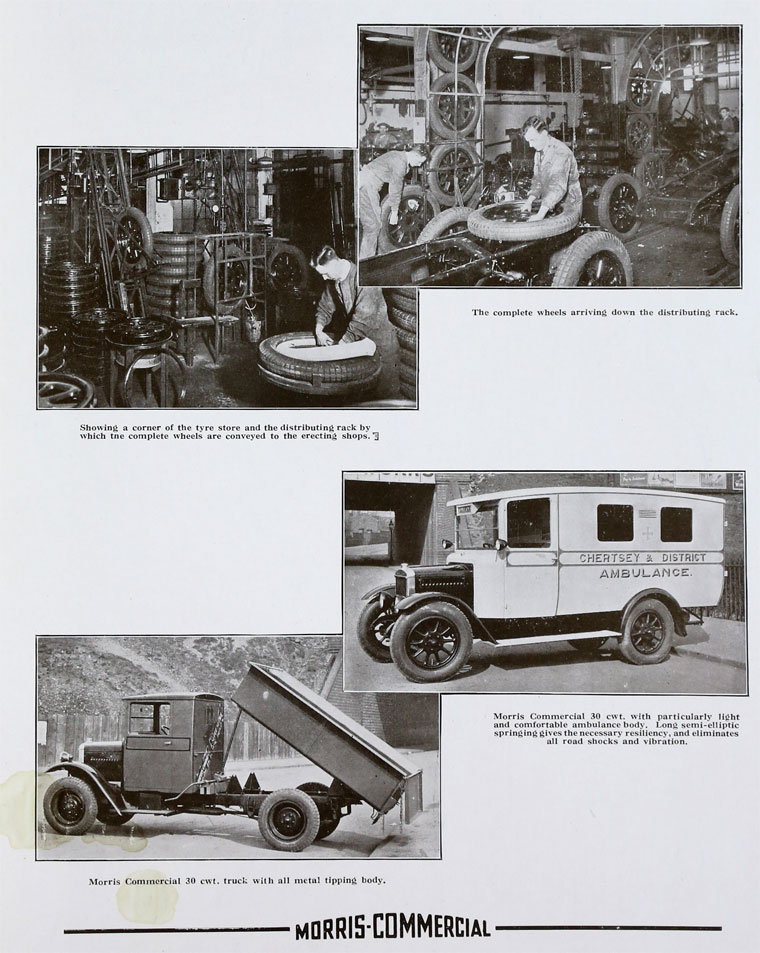 IN these days of intense industrial competition the success of any business enterprise rests primarily on successful production, and nowhere is this more clearly exemplified than in the case of the commercial vehicle industry, where the necessity exists for meeting the onerous and ever-progressing demands of modem transport.

To achieve this end the manufacturer has first to take steps to ensure that his factory organisation is highly efficient next comes a study of transport requirements from all angles - commercial, municipal, agricultural, military, etc. - from which ideas are formulated, to be followed by practical designing, ceaseless experimenting and drastic trial.

Then, often after months of patient scheming, the completed model emerges in a blaze of publicity, to take its place and fight its way in all parts of the world.

The future welfare is now entrusted to the Sales organisation. Scientific methods of distribution are applied, and the model is helped on its way by all the means known to efficient salesman- ship, until evolution produces a further development to supplant it.

From the pages which follow, some idea will be gained of the Morris-Commercial organisation, whose personnel, animated by a spirit of the keenest enthusiasm, is doing so much to make the British motor vehicle industry pre-eminent not only in Great Britain, but in every corner of the globe.

No account of Morris-Commercial Cars Ltd. would be complete which omitted some reference to the amazing manner of its growth to present day dimensions.

In February, 1924, SIR WILLIAM R. MORRIS, took over the plant and premises of the old-established firm of Wrigley and Co. This comprised some 200 machines designed for the manufacture of motor-car components, and a Staff of little more than 350 employees.

Within the space of only four-and-a-half months, with the same staff and employees, SIR WILLIAM R. MORRIS laid the foundation of the huge concern of to-day, the largest producers of commercial vehicles in Europe.

In less than a fortnight - a day sooner than the promised time - twenty of these new-born products were handed over to the War Office authorities, who were good enough to record their approbation in a commendatory letter.

No other manufacturer found himself able, at this period, to meet this sudden demand for so specialised a product, with the result that Morris Commercial Cars Ltd. led the way to the development of the modern semi-flexible six-wheeled vehicle, which has proved so successful in every sphere of use.

Since that date more than 2,000 Six-Wheelers have left these works, to assist in the development of commerce, agriculture and communications in every corner of the globe.

When the trouble in China in 1927 demanded protection of British subjects and the expedition of British troops, Morris Commercial Cars ltd. were able to provide the type of transport essential.

No clearer proof could be found of the fact that, given only the right man as leader, with the right methods, British brains and British labour are capable of adapting themselves to any development they may be called upon to meet.

For the first two weeks of May, 1924, two trucks per week left the newly-converted works. By the end of May this figure had risen to 26; by the end of August, Morris-Commercial Cars Ltd. were turning 150 vehicles every week. This figure rose steadily through the succeeding years, with the result that to-day the twelve hundred odd machines in use can produce a weekly output of 500 vehicles. The first truck was sold on the 18th May, 1924. To-day upwards of 42,000 Morris-Commercial products have been placed on the world's markets.

As brilliant example of the extraordinary resources and organisation of Morris Commercial Cars Ltd. is the interesting fact that during the disastrous week of the General Strike of May, 1926, when so many industries were temporarily brought to a standstill through lack of material and men, our output for that week was doubled.

Starting with the popular Ton Van as the main product of the first year, development in versatility has kept equal pace with production, until now the range of Morris-Commercial models embraces such divergent types as One-Man Tanks, Refuse Lorries, Six-Wheelers, Fire Engines, Taxicabs, Tractors, Ambulances, and a host of other models for every conceivable purpose demanded by modem transport conditions.

War experience emphasized the necessity for the evolution of an efficient means of transporting infantry and material off the road by mechanical power.

Having peddled a method of securing torque control for twin driving axles on articulated bogies, the War Department turned to its for assistance.

Plans were discussed. Within one month of the receipt of the completed designs the first Six-Wheeler was driven from its assembly line under its own power.

A single contract for over 300 of these vehicles supplied to the Air Ministry led to an increasing rate of output, with the result that to-day Six-Wheeler assembly is capable of dealing with fifty chassis a week.

A singular tribute to their excellence was paid when the Government of the Protectorate of Bechuanaland decided to employ two of these vehicles to undertake the arduous and hazardous exploration of a traffic route across the little-known Kalahari Desert in 1928. The desired object was achieved, the two Morris Commercial Six-Wheelers being the first and only motor vehicles to succeed in conquering "the worst desert in Africa."

SOME IMPORTANT ADVANTAGES OF THE SIX-WHEELED CHASSIS.

The rigid frame six-wheeler possesses many advantages over and above the orthodox four-wheeled vehicle, to which passing reference has already been made. Probably the most important of these lies in the fact that all the rear wheels take a share of the drive and load at all times, whether the vehicle is travelling over the ordinary made highway or negotiating soft and uneven ground.